(First posted at outlandercast August 2018)
Maybe you’ve been to Scotland and visited Outlander locations yourself. Maybe you dream of going one day and want to know where to find your favourite scenes. Or maybe you just can’t get enough of the show and/or Scotland and need a fix. Whatever your reason, we hope you’ll enjoy our new periodic series Seeing Outlander, in which we show locations from the series (juxtaposed with the scenes themselves where we can). We’ll also have some never before seen photos coming your way as OutlanderSeason 4 kicks off too, so stay tuned.

First up in the series is Roslin Glen Country Park, which was the setting of one of Outlander’s most gripping moments between Jamie and Claire. 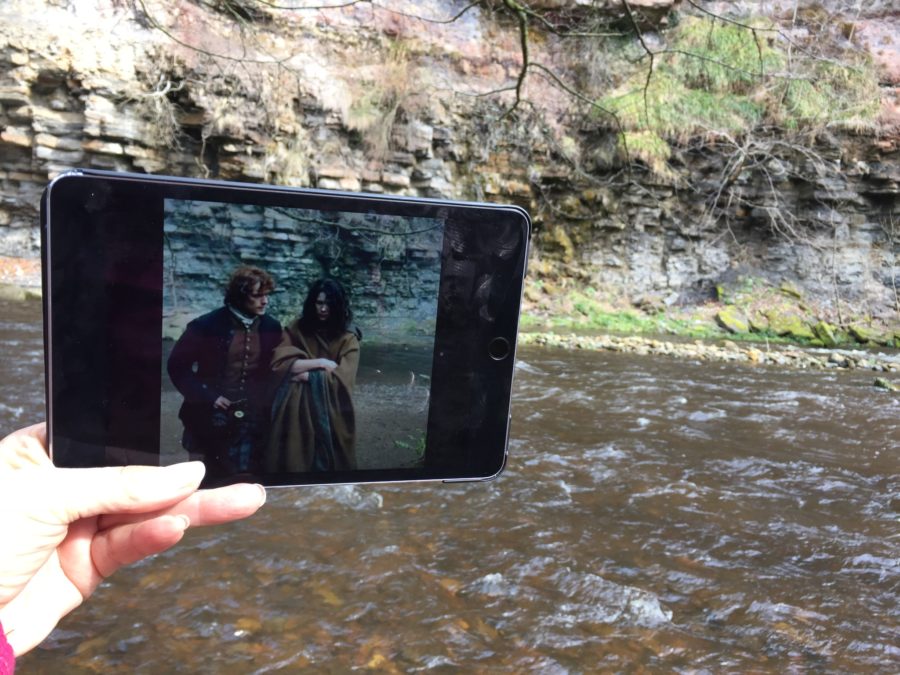 Picnic and a swim anyone?

Well swimming might be stretching it! But a picnic certainly. Well, OK, weather permitting!

This is a beautiful Outlander location to visit, even for people who might just be having a short stay in Edinburgh. It’s only 25 mins south of Edinburgh, and just under an hour from Glasgow. By car is the quickest and most convenient way to get there but there is also a bus service from Edinburgh. You catch the Number 37 from Central Edinburgh. It takes 55 mins to get there – google for a timetable. And be aware that you need the correct fare as you can’t get change on the bus.

Not only is this a fabulous iconic Outlander site to visit, but it’s a beautiful walk to the location. The day I was there I mostly had the place to myself. Only a couple of families strolled by and it was sunny and warm. And it’s an easy and very accessible 15- to 20-minute walk on well-made level path alongside a beautiful burn (you may call it a creek, a stream or a brook). 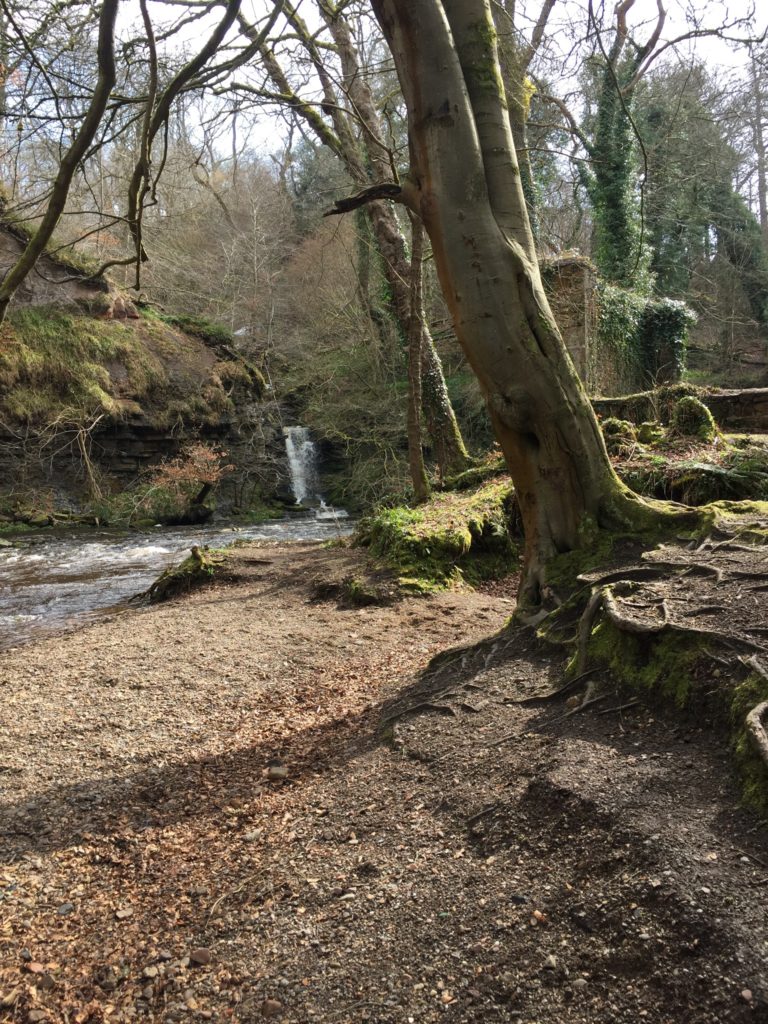 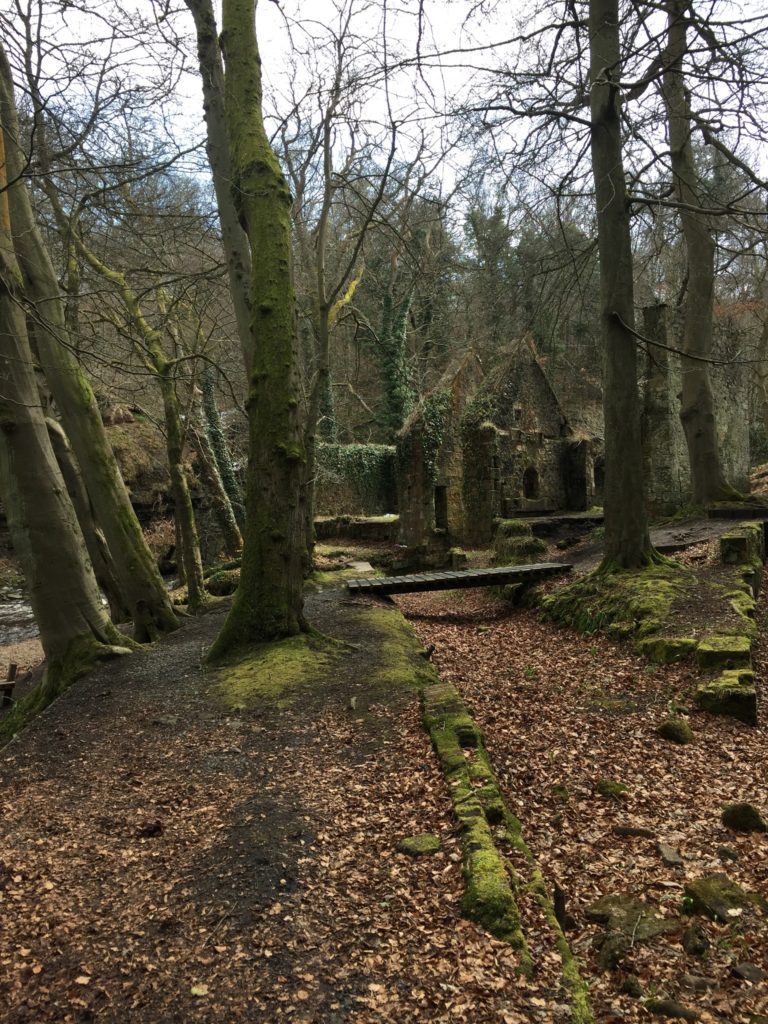 Arriving at the place  immediately transports you to that emotional scene where Claire and Jamie have their first big fight in Season One’s  “The Reckoning.” You can just hear Jamie yelling that he wants to slap Claire until her ears ring ….. she calls him “a brute and a fool” …. and then “You’re tearing my guts out Claire” and finally “forgiven” from both of them. 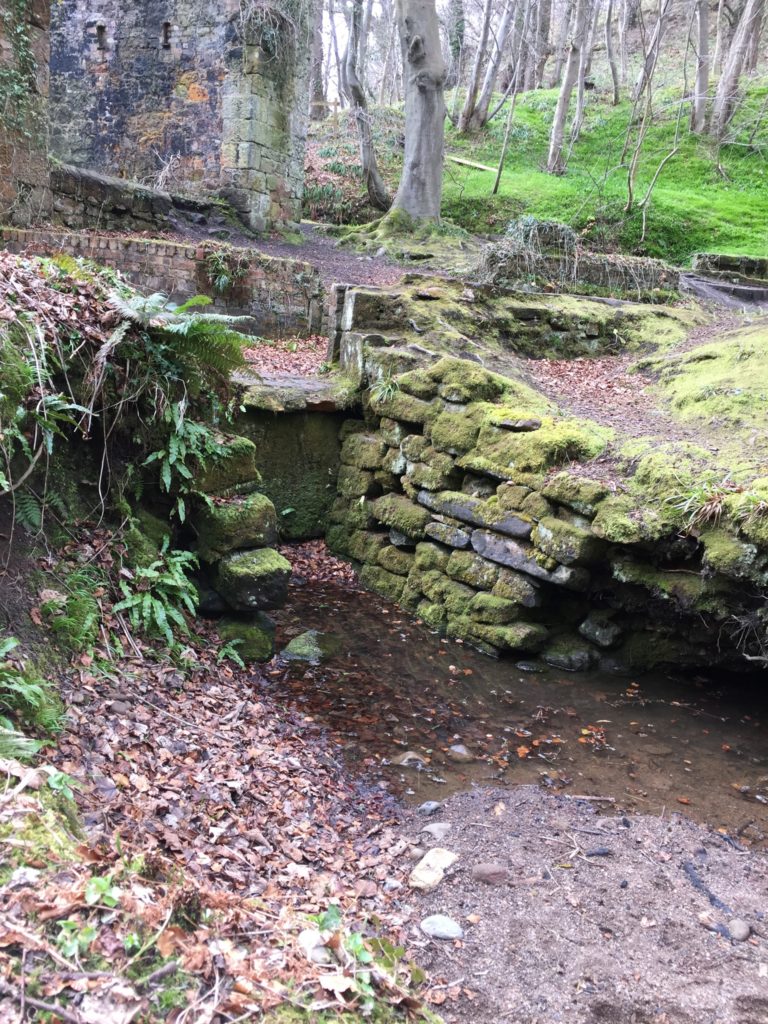 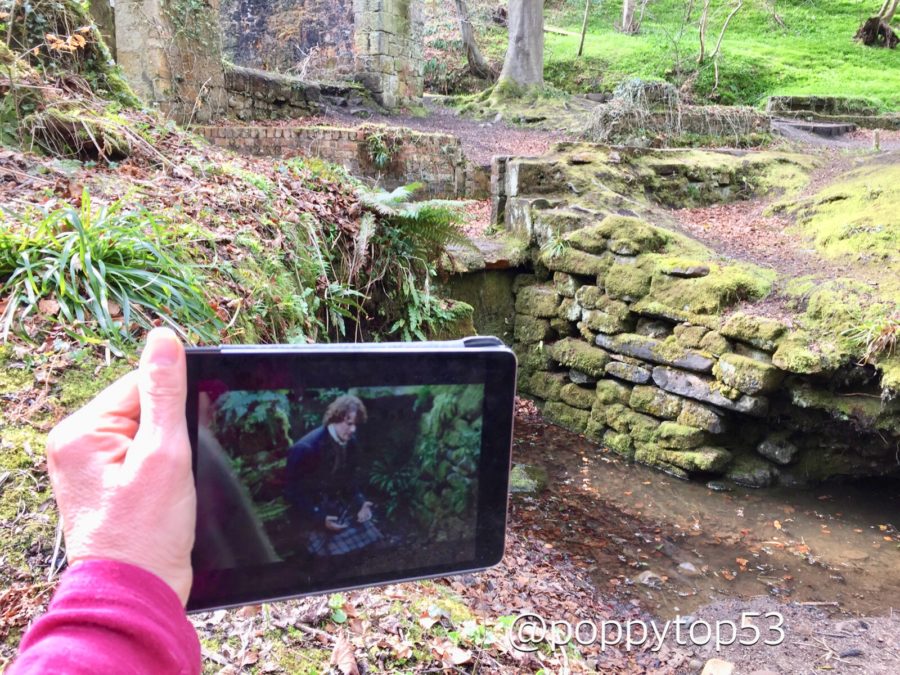 If you listen to the OutlanderSTARZ podcast for this episode, Ron D. Moore and Matt B. Roberts discuss what it was like filming on that day. They knew it was such an important and iconic scene from the book so they allowed a whole day for filming, which they described as “luxury.” Although they qualified that by saying that it was 30 degrees (-1 celsius) !!, but at least it wasn’t raining! Those actors and crew really do work in some gruelling conditions. 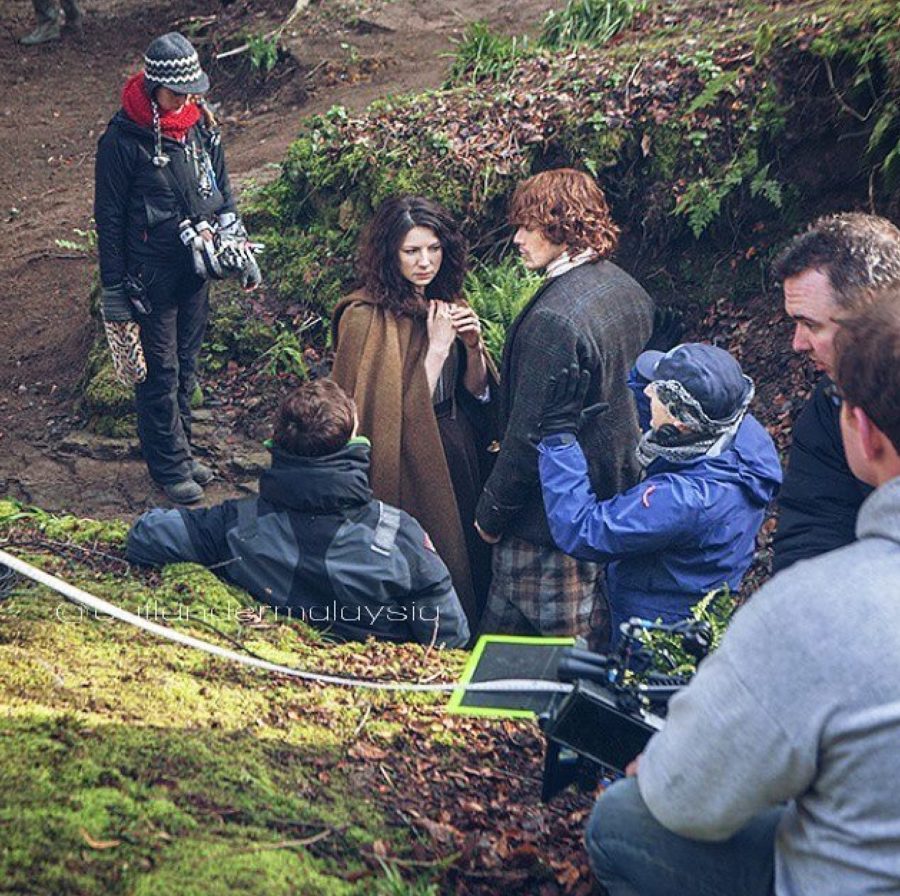 Apparently they didn’t even initially rehearse that scene; They just went to the location and tried different things, just letting the actors go for it. They wanted to have plenty of options because in post production, something that may not have seemed too good at the location, can become “gold” when it’s all being put it all together.

Ron and Matt loved the raw emotion shown by Sam Heughan and Caitriona Balfe, and how they really showed these two characters cutting loose with each other for the first time in their relationship. Jamie is so confused that a woman of his time does not just blindly obey him and typical Claire will not back down one little bit. 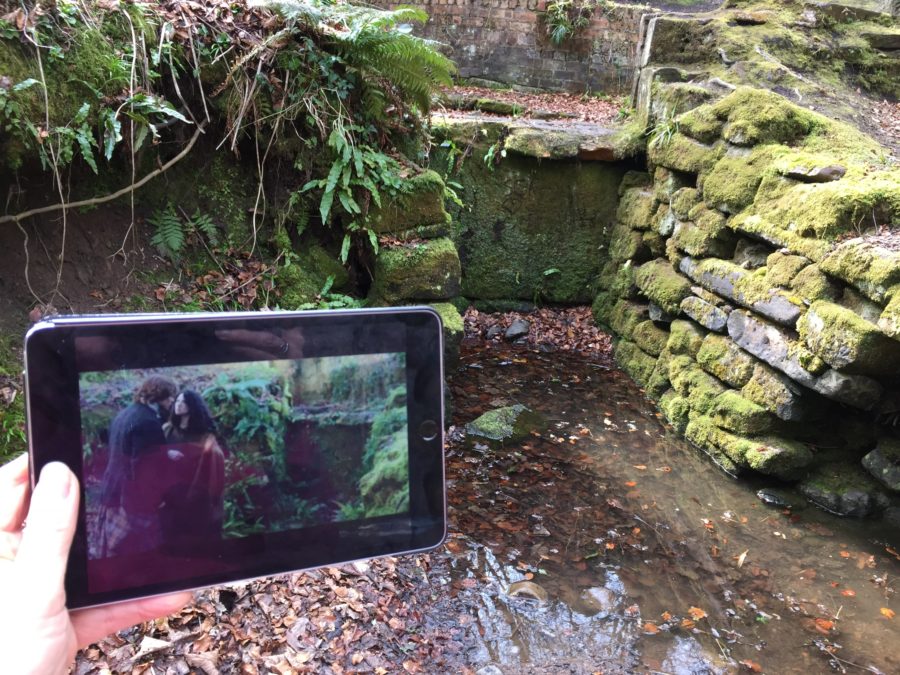 You’ll recall that in the final shot of this sequence, Claire and Jamie are seen from an aerial view. Ron talks in the podcast about how a crane was used to take that shot. He says that early on he was particular about not using cranes, as he wanted much more of a hand-held look to the filming, but eventually he changed his mind about that. 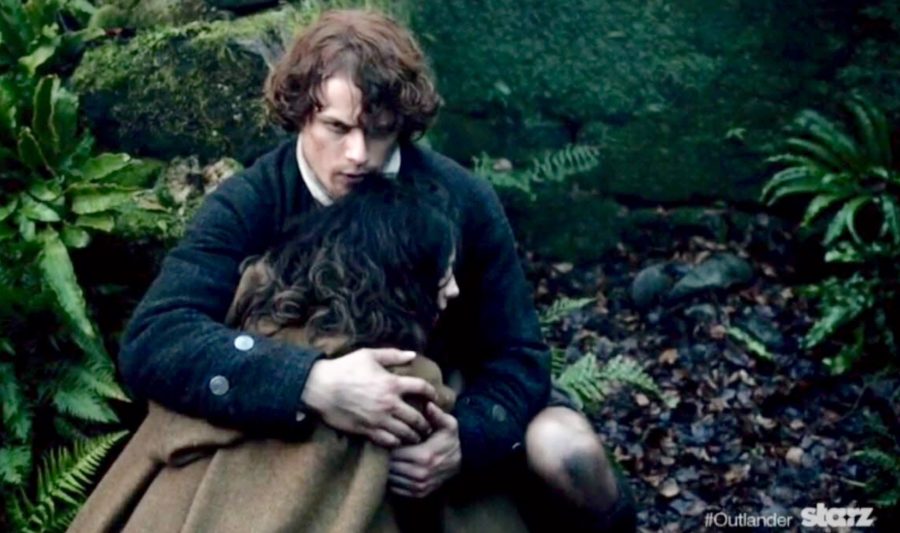 And as so often happens in Outlander, the setting /location/landscape are powerful elements of the production. It is a very atmospheric place. 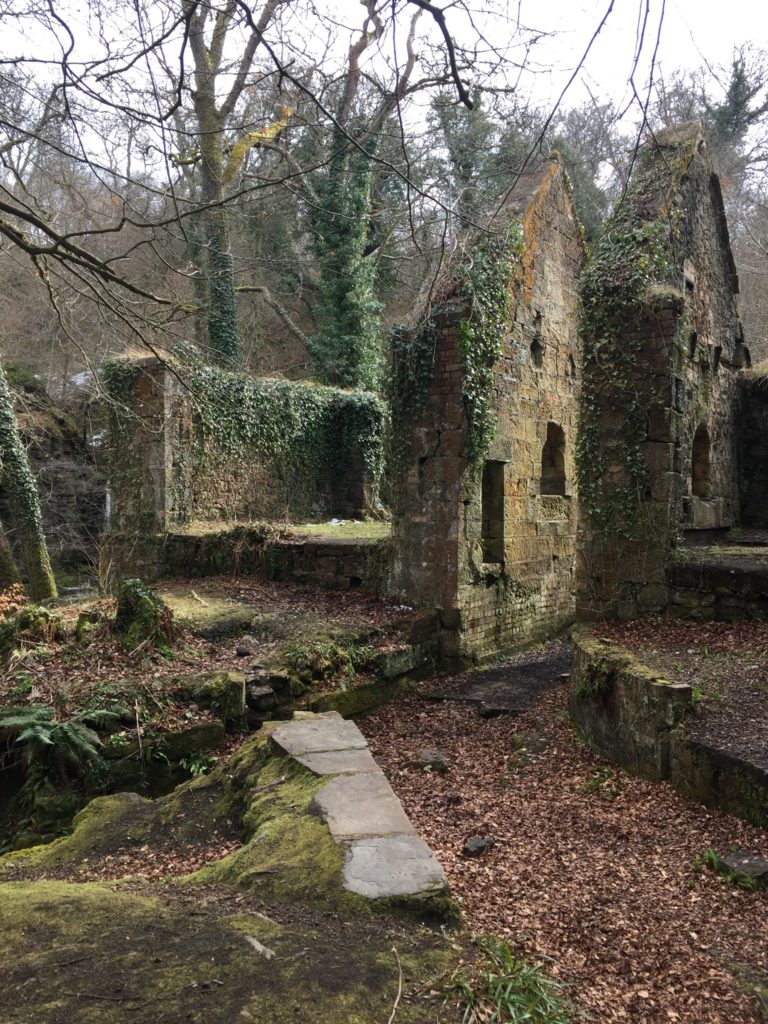 Here are the maps to get you there from Edinburgh …… 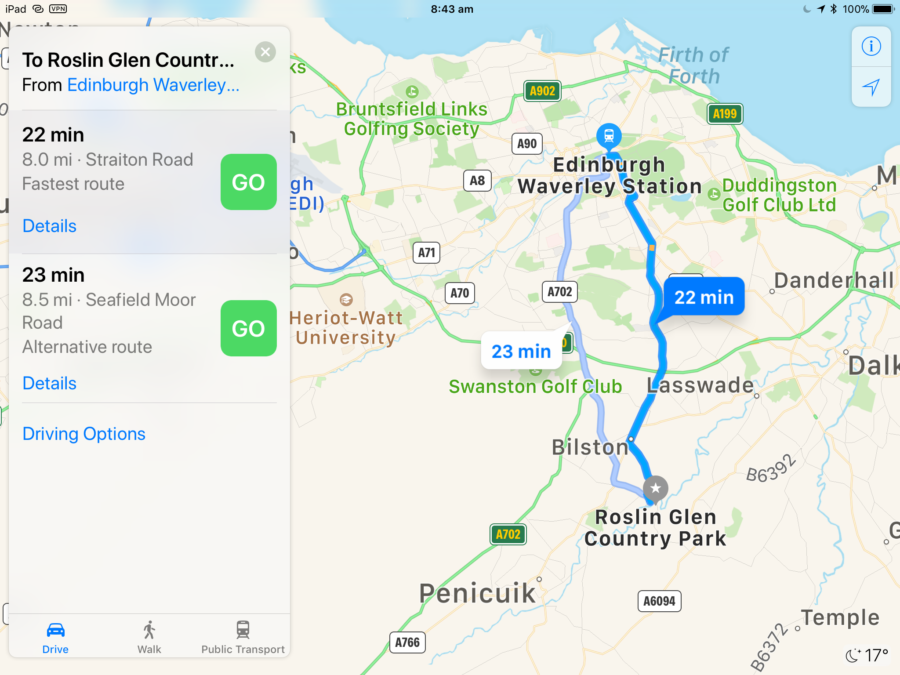 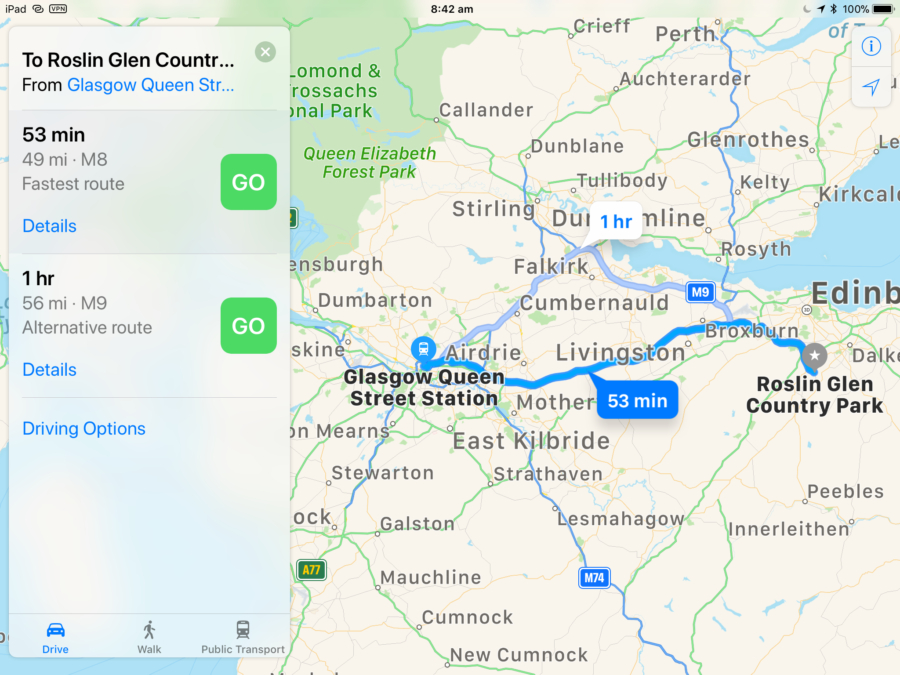 And here is the route you take up to the “Mill Lade remains” where the scenes were shot. Follow the yellow line …. 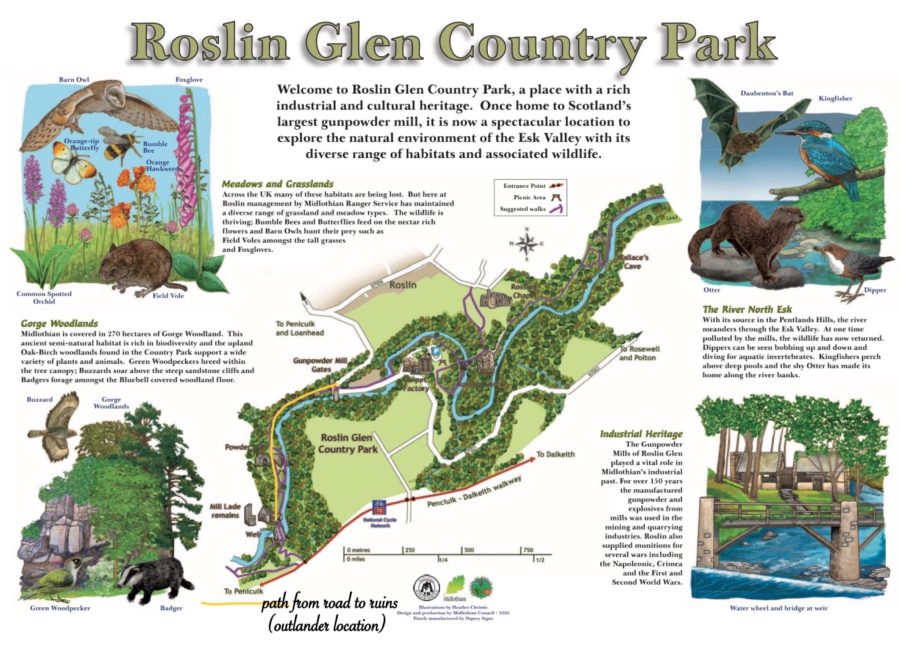 You can also download a pamphlet with a map of the park.

It’s not easy to park your car right at the entrance to the path because it is on a hairpin bend in the road. You need to go a little further along and find a spot on the side of the road, or even a little further to the main parking area for the park.

If you want to make a big day (or two) of it, nearby beautiful Pentland Hills Regional Park is worth a visit. Also the beautiful Rosslyn Chapel (famously used for the filming of Dan Brown’s Da Vinci Code in 2003) and Rosslyn Castle are nearby.

Have a great day! 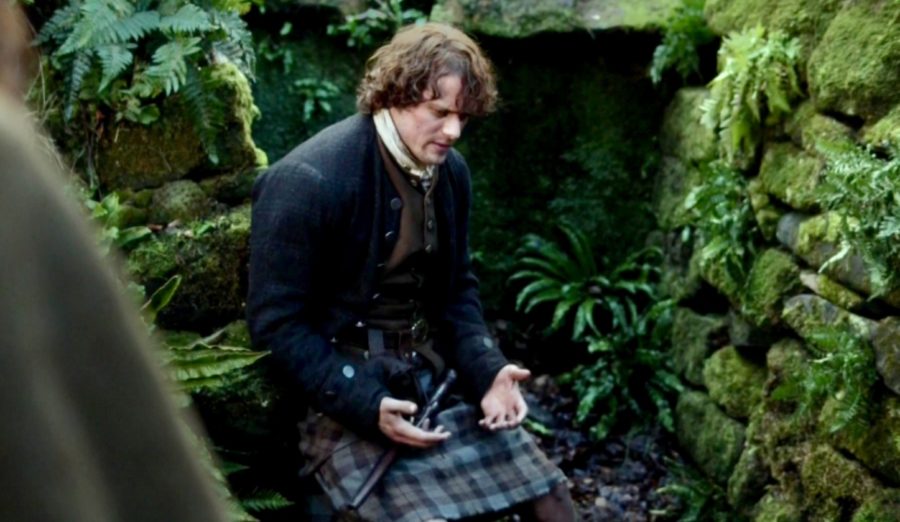 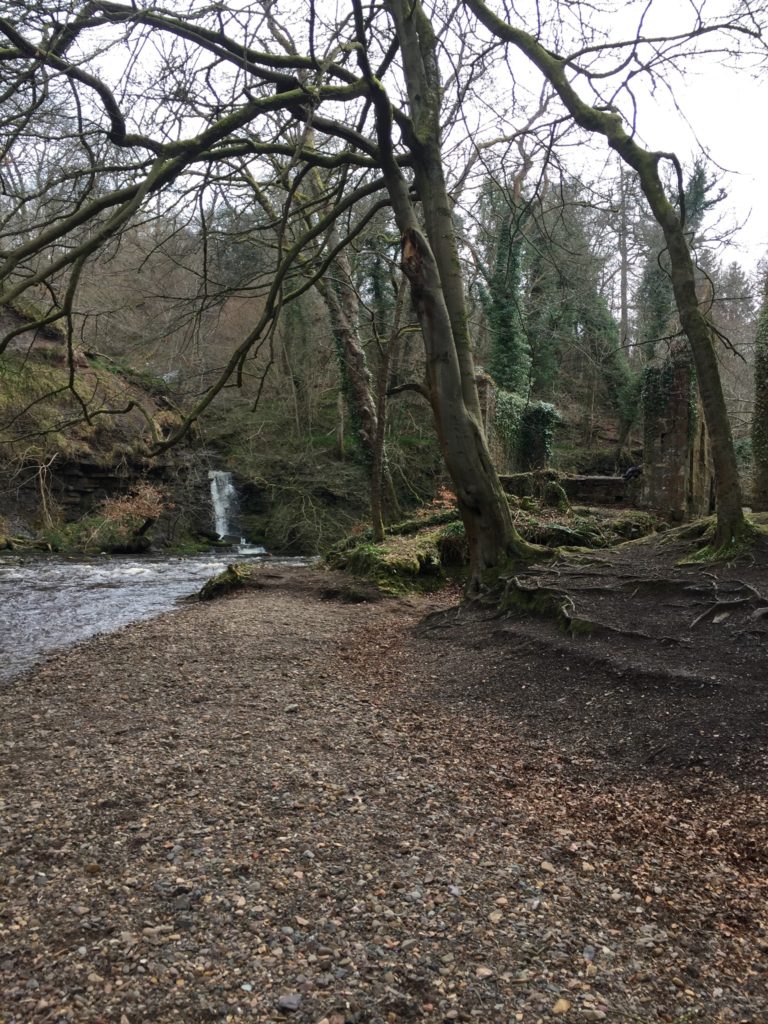 Have you visited Roslin Glen Country Park? Or any other Outlander locations?