Cats may have nine lives but so apparently does Outlander’s Jamie Fraser. Here’s a look at the many near deaths of Jamie Fraser.

Did someone say Jamie Fraser has nine lives? Yes, I think Ashley Crawley mentioned it in her last Outlander recap. Well, he just used up another one after being bitten by a … hmmm, what sort of venomous snakes do they have in North Carolina? I think Bree (Sophie Skelton) said it was a pit viper during her resurgence as an engineer, finally getting to answer her calling, and saving the day. Just in the nick (literally) of time. 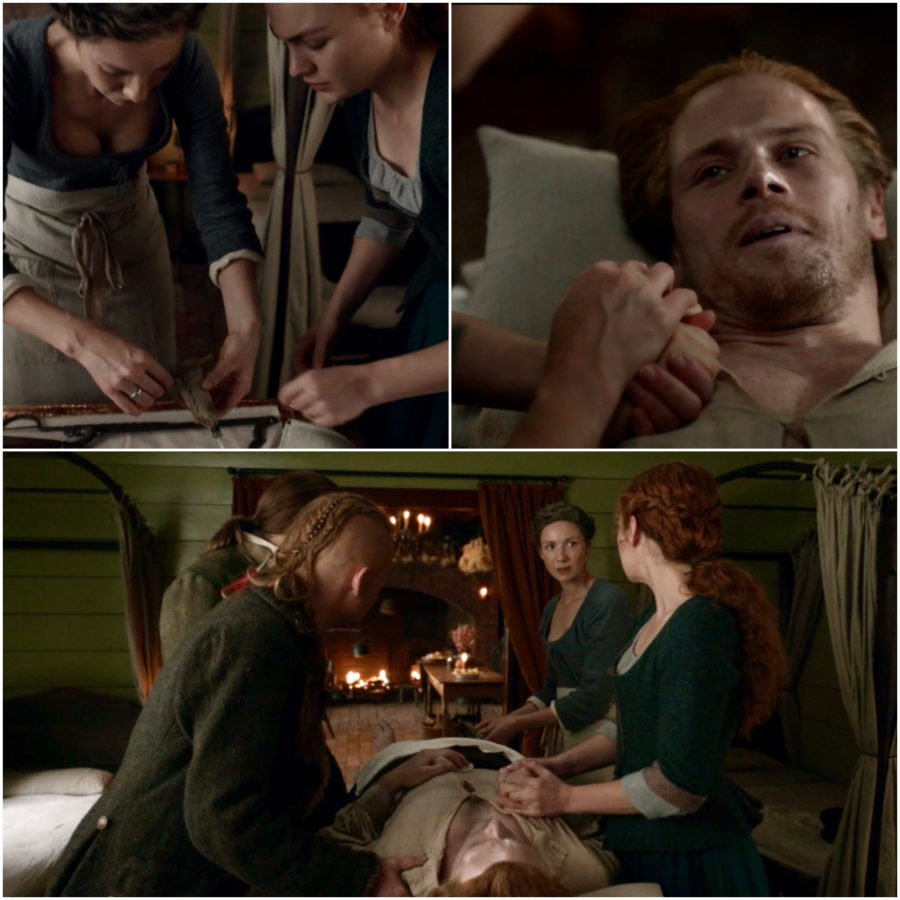 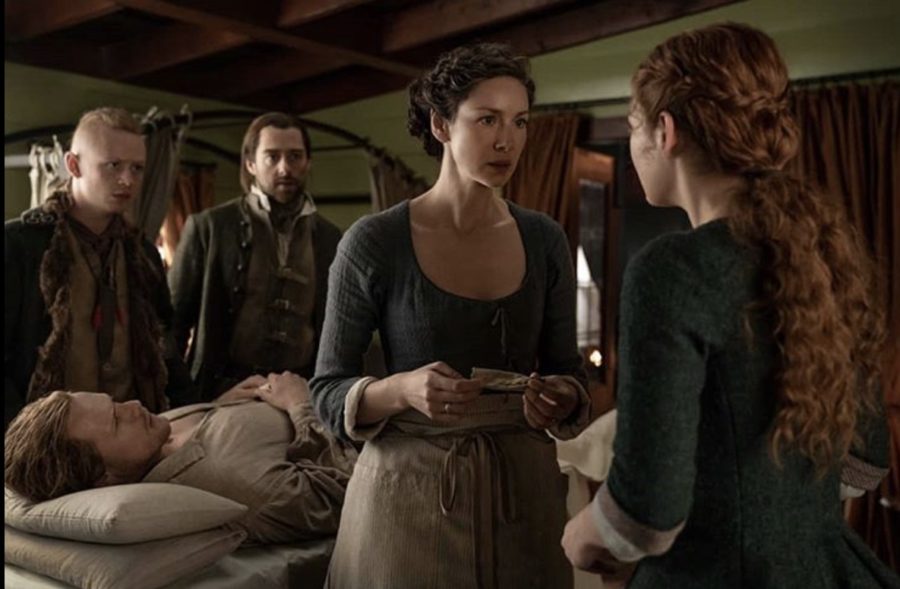 Sam Heughan excels at portraying these horrendous, near death, heart-rending scenes. Someone hand him an award or something, will you?

We Outlander zealots know that Jamie Fraser is no stranger to clinging on to life by a thread. He has faced death and been near death on a number of occasions. But, thank goodness, he always comes back from the brink. Often, but not always, with help from the white witch, the conjure woman, the auld one, his beloved wife and personal physician Claire (Caitriona Balfe). 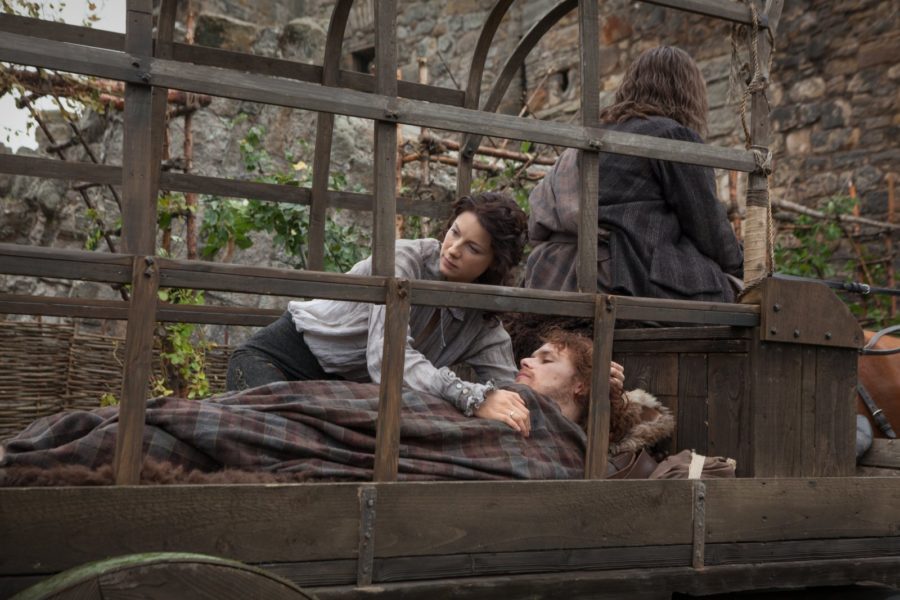 Outlander Episode 509, “Monsters and Heroes,” and the snake encounter got me reminiscing about Jamie’s other seriously traumatic death-defying experiences. So, let’s take a trip down memory lane with the king of men.

The first time Jamie cheats death is the utterly gruesome scene where he is lashed to the bone by Black Jack Randall with a cat o’ nine tails. In Outlander Episode 112, “Lallybroch,” Jamie begins to tell Claire the details of what actually happened to him at the hands of BJR. The first time I saw that I literally had to peek through my fingers, it was so realistic and so horrific. In the show Jamie relates the events in retrospect to Claire, telling her of his father’s death. He says that his father was there at the flogging (unbeknown to Jamie at the time) and when Jamie fell, his father believed him to be dead. The shock of this caused him to drop with an apoplexy (today we call it a stroke) from which he never recovered. In the book we are told that Jamie nearly died as a result of the injuries he sustained that day. 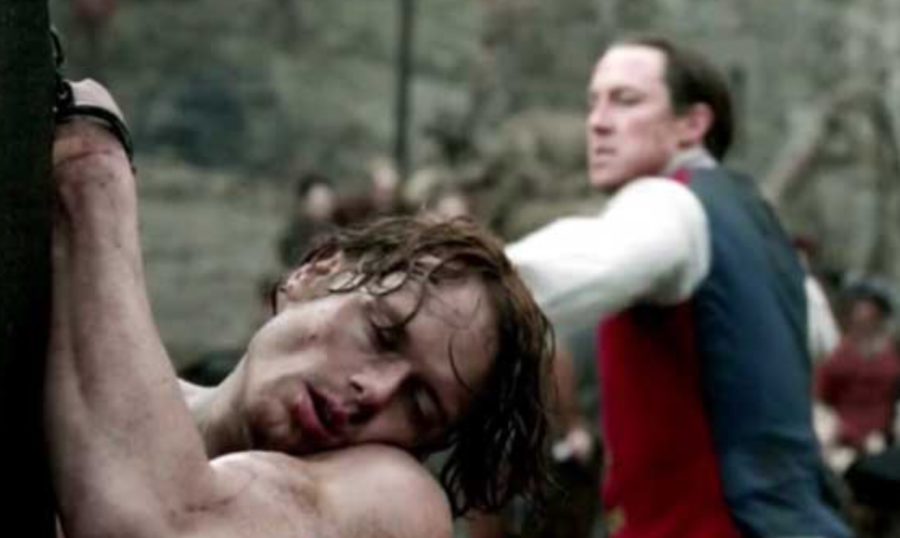 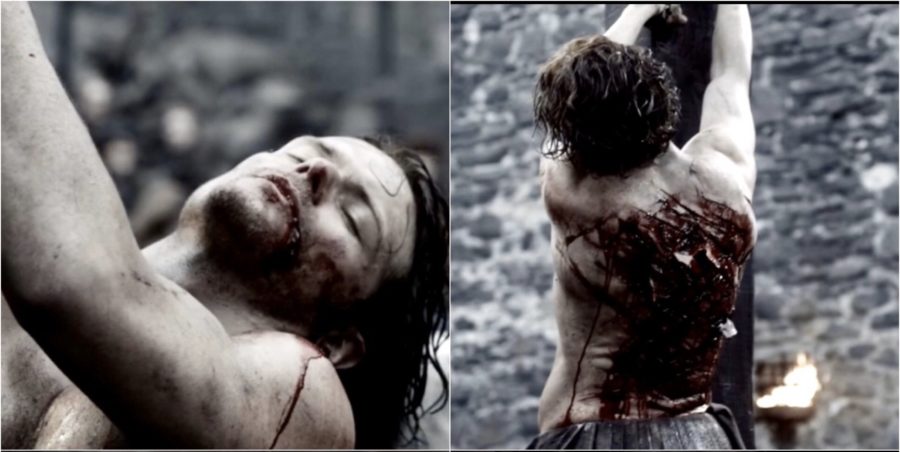 This scene must have been incredibly grueling to shoot, both for Heughan and Tobias Menzies. Incredible physicality in acting on both their parts.

Jamie’s next brush with death comes in Outlander Episode 115,  “Wentworth Prison,” after he is captured by the Redcoats and awaits the hangman’s noose. Jamie stands with Tarran Macquarie (Douglas Henshall) waiting for his name to be called as one prisoner after another climbs the gallows to meet their grisly fate. As Claire says in Outlander episode 509, “You would joke on your deathbed, wouldn’t you?”, the Fraser sense of humour is to the fore. He tells his new friend Macquarie that his main problem is that his wife will be very angry with him for going and getting himself hung.

Jamie stands stoically as his fellow prisoners are hanged and when Macquarie is called forth, he crosses himself. When called himself, he decides to fight his captors. We hear more than once in the Outlander stories that being hanged is considered a most dishonourable death. It seems that Jamie is hoping he will be killed in a stramash with the soldiers. Alas, he is dragged up to the gallows, only to get a last minute “reprieve” on the appearance of his nemesis BJR. 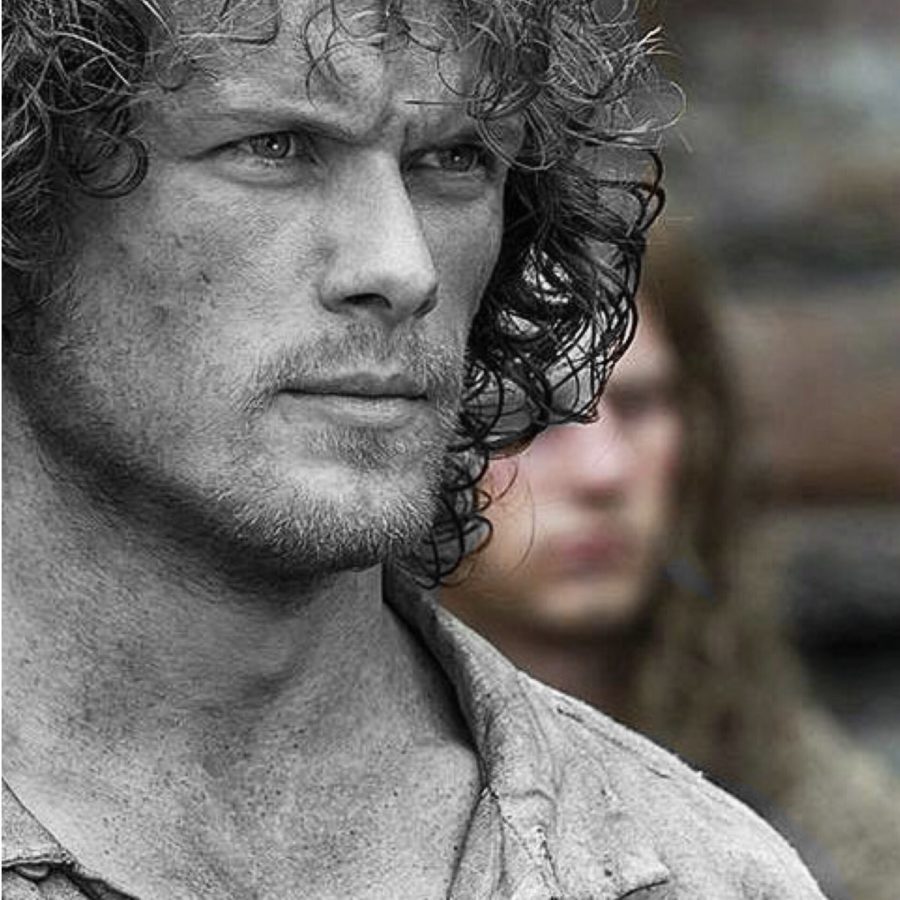 Next up, torment and torture, in Outlander Episode 116, “To Ransom a Man’s Soul.” BJR causes Jamie grievous bodily harm after “rescuing” him from the gallows. At first Jamie fights back with all his will and might, but after Claire’s failed attempt to save him and his bargain to save her life, he passively submits to the ugly will of Black Jack. The bargain includes Jamie being spared from a coward’s death by hanging, and BJR promises him a soldier’s death. 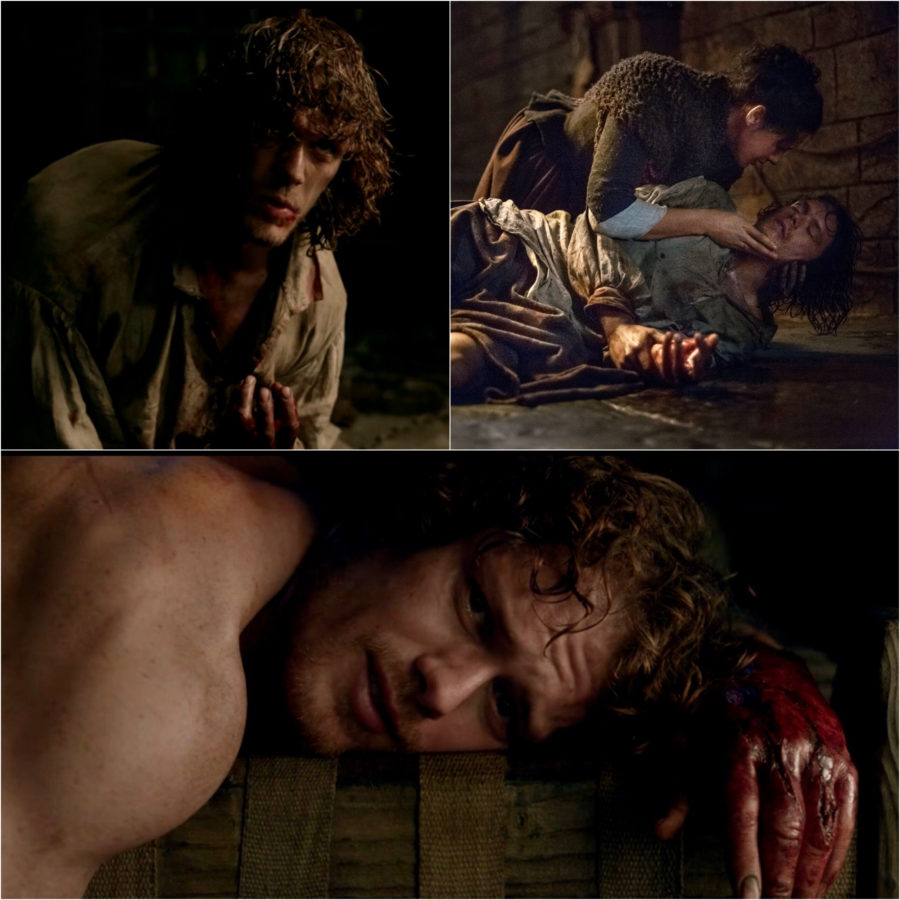 After what seems like hours of abuse (again, the first time peeking through my fingers) Jamie is exhausted, agonised and just waiting for the release of death. Again, saved at the last minute, this time by his valiant clansmen.

After this nightmarish experience, Jamie literally loses the will to live. He wants to die; he begs Willie to help him to die. Murtagh (Duncan Lacroix) says he would kill Jamie rather than see him waste away. He is so full of shame and self-loathing after BJR’s abuse that he cannot see a way out and is seriously suicidal. 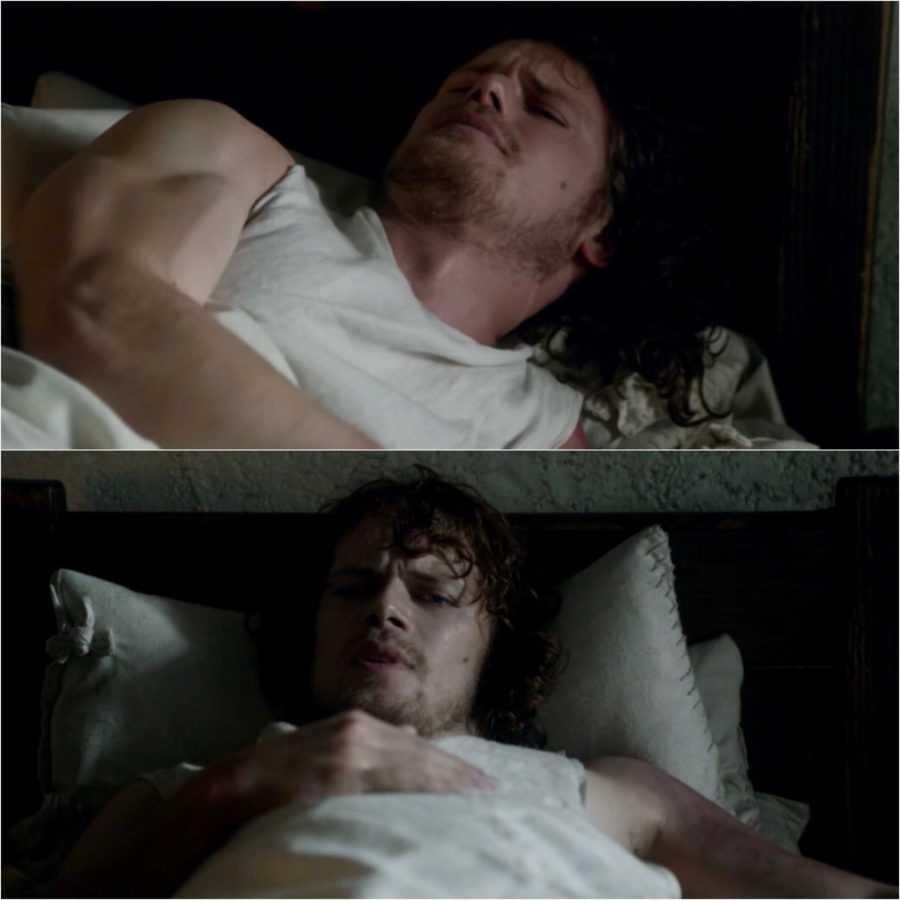 Claire comes to the rescue with her use of the lavender, the hallmark scent used by BJR. She hauls Jamie back to his senses, dragging him back from desperate inertia into the world of intense feeling. 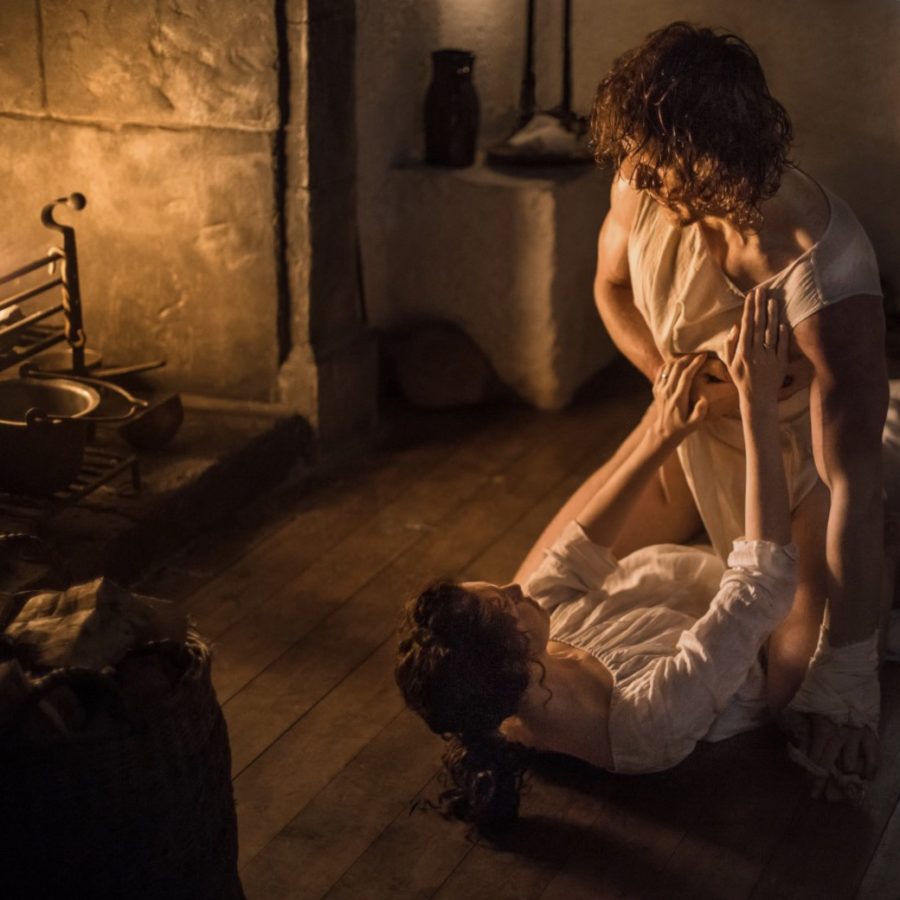 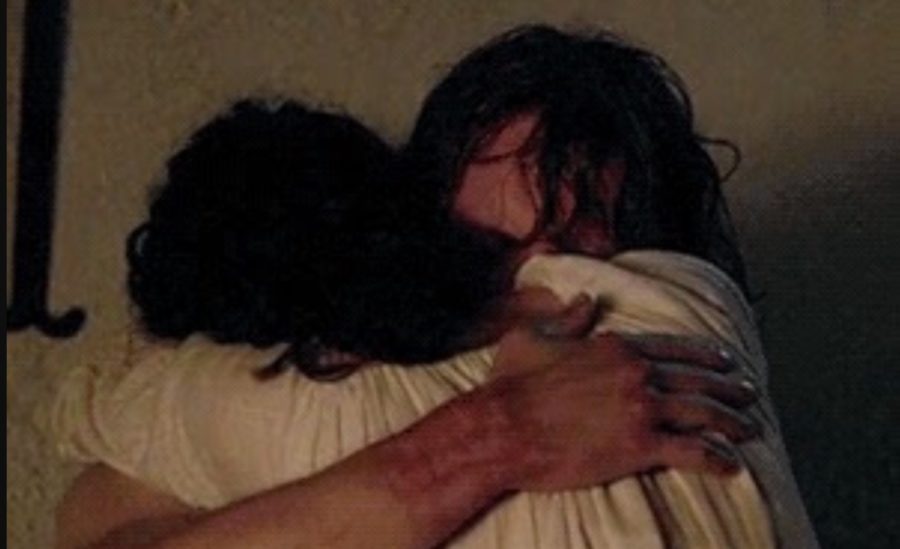 Next stop, the Battle of Culloden. After he sends Claire back through the stones for safety, Jamie goes to meet his destiny, prepared and willing to die in battle. The first episode of Outlander Season 3, “The Battle Joined,” opens with Jamie lying gravely injured on the battle field. Sam Heughan was highly acclaimed at the time for acting this scene with virtually no movement or voice, yet conveying every ounce of agony and torment that has led up to these moments. Again, he is “revived” by his vision of Claire and the physical presence of his dear friend Rupert (Grant O’Rourke). 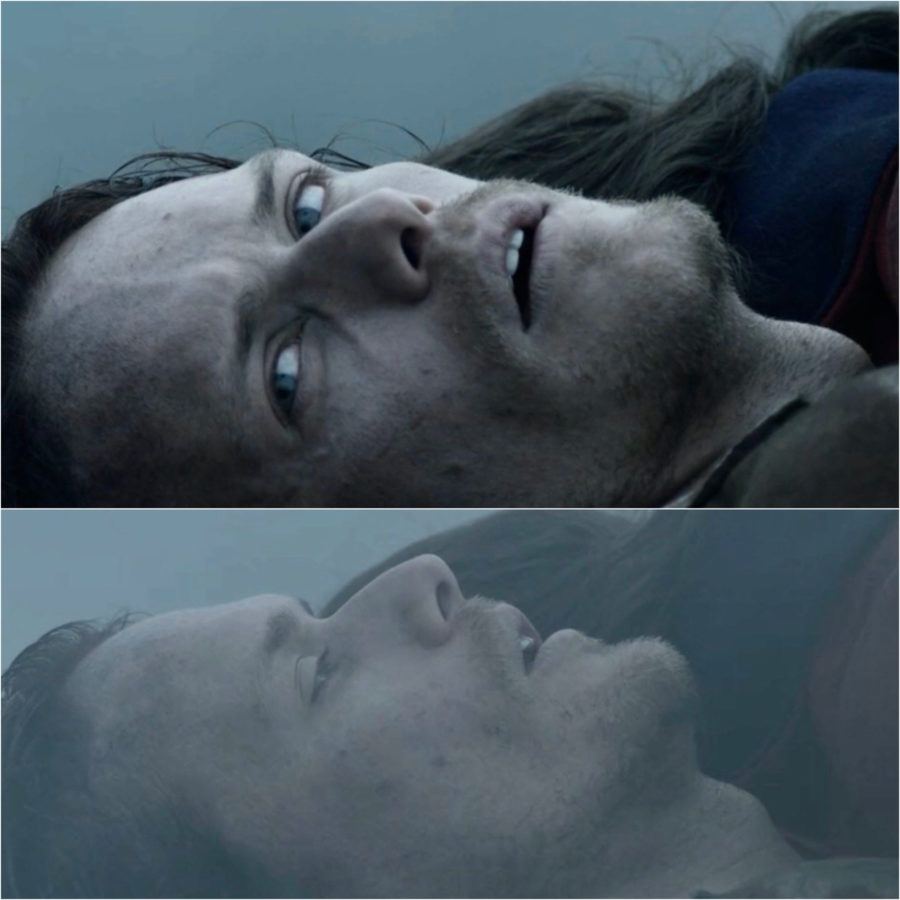 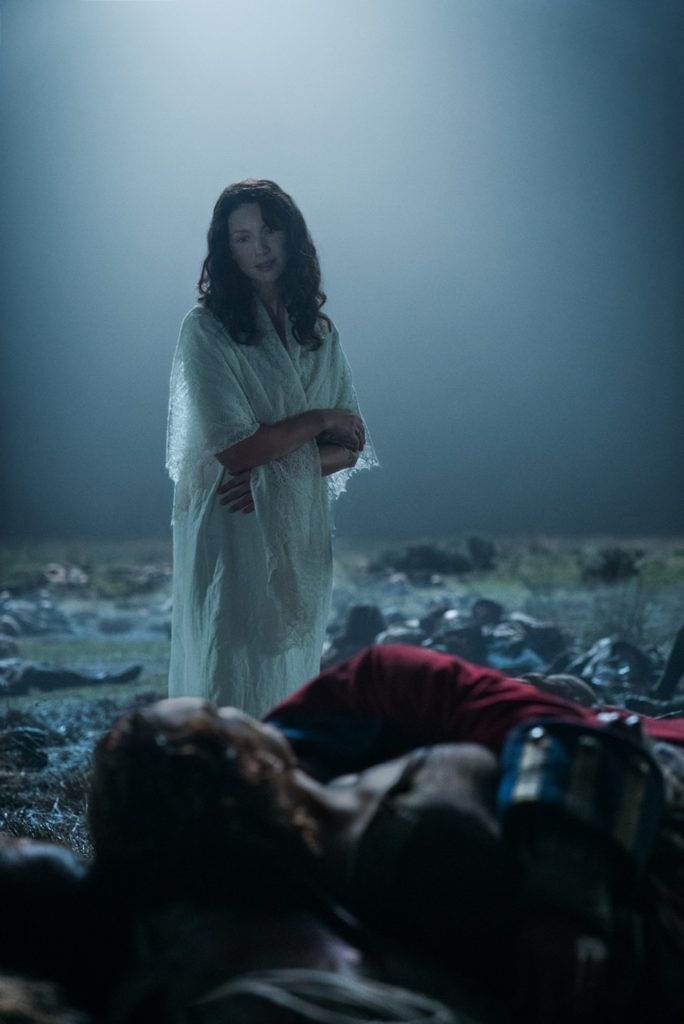 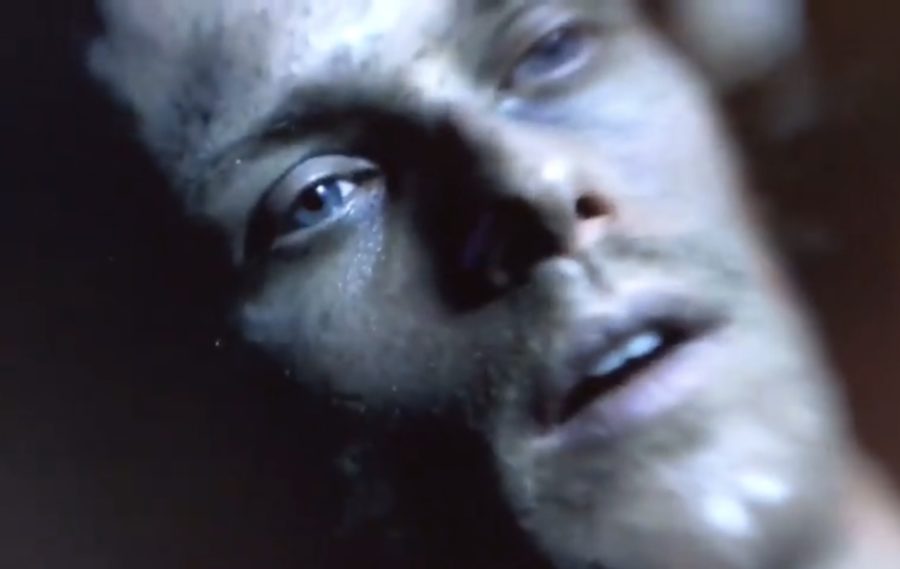 Taken with his fellow Jacobites to await execution, Jamie feels that at last his destiny will be fulfilled. Yet again, his fate is denied him by the strange twist of events that appears in the form of Lord John Gray’s older brother Hal.

The Gray family honour dictates that Red Jamie Fraser must be saved to repay the debt from Jamie sparing Lord John’s life ahead of the Battle of Prestonpans. Despite his protests, he is spirited away and must suffer the jolting, agonising wagon ride to return to Lallybroch. 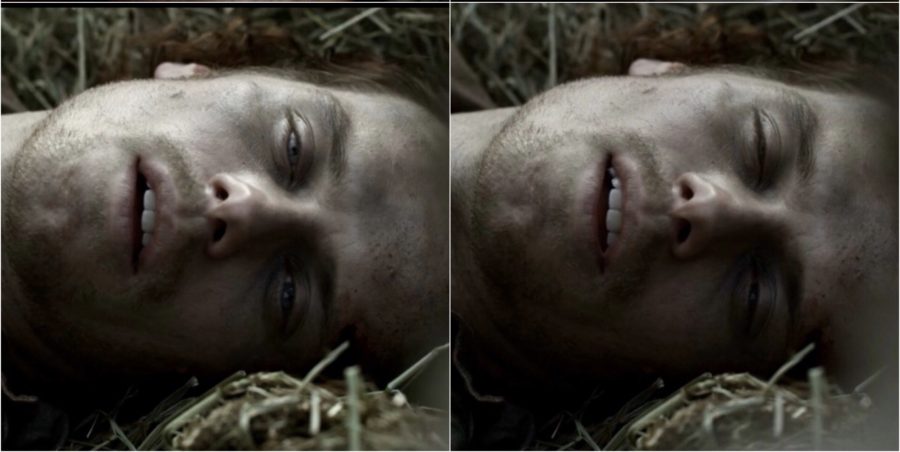 By this stage in the Outlander story, Jamie Fraser has already endured shoulder dislocation, gunshot wounds, been slashed with swords and knives,  hit on the head, and been stomped on by a horse at Prestonpans! He remains relatively unscathed during the rest of Outlander Season 3, and in Outlander Season 4, well, there’s the seasickness that makes him wish he was dead and the minor matter of a shipwreck. He also gets quite a beating at the hands of Stephen Bonnet’s thugs, and then has to battle a giant man-bear, the Tskili Yona. But these are naught but scratches and minor skirmishes to the king of men, and he soon bounces back.

It’s not until Outlander Season 5 that we see Jamie encounter his next near-death experience. The snake bite incident dominates Outlander Episode 509, “Monsters and Heroes,” as we see Jamie battle the venom of the snake and the resulting infection in his leg.

In this episode we see intense emotional encounters between Jamie and Roger (Richard Rankin), Jamie and Ian (John Bell), as well as Jamie and Claire as they all battle different aspects of the situation. When Jamie begins to languish, his heart slows, he says he is tired, Claire swings into action to bring him back to life in a most unconventional manner (ahem!). I can’t resist pointing you in the direction of a post on this subject that discusses Claire’s novel approach to “laying on of hands” in a most enlightening (and scientific) manner!

Finally,  we were once again enthralled by Heughan’s performance of Jamie Fraser facing the end of his life. But of course, we are all so glad that he is still with us. To repeat myself, will someone just give Sam Heughan a really nice big award for his wonderful performances? 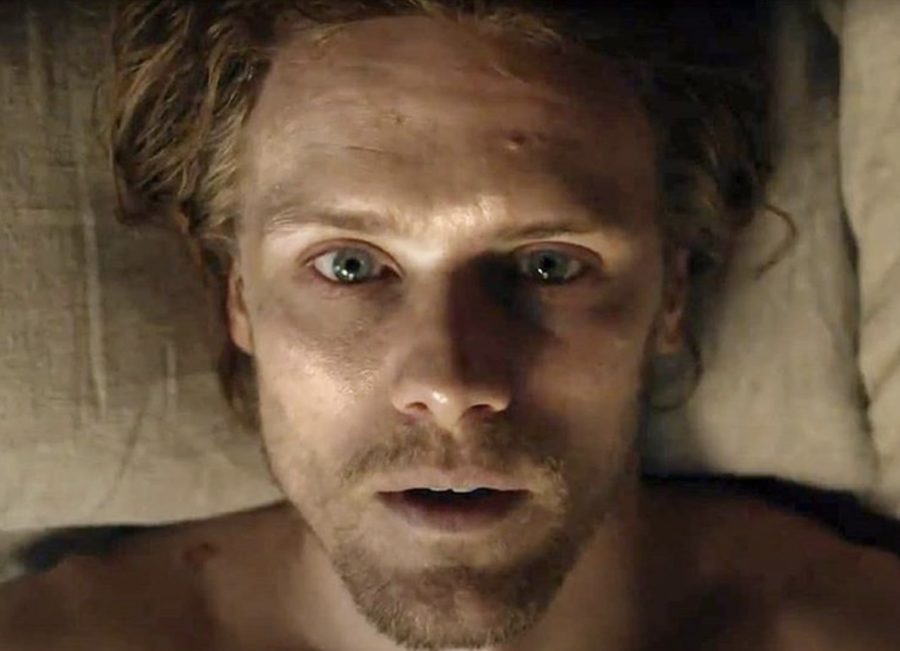 PS: let’s also give a shout out for an award for Sam’s make up artist Wendy Kemp Forbes, who has been working with him all these years. She fashioned those scars for his back, paints on his bloody wounds, and gives his face that ashen death bed appearance. What skill and what talent! 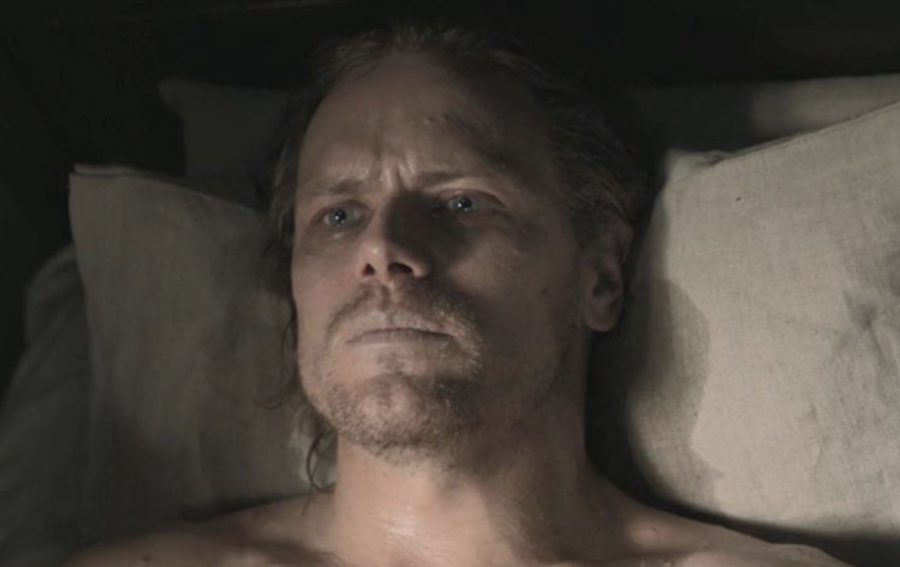 Images thanks to Outlander STARZ and Geno Acedo

What are your favorite Outlander moments of Jamie facing death?