(First posted at outlandercast in March 2019)
Recent online Outlander fandom fighting has gotten me thinking – a lot – about being a fan. My Outlander experience is the first time I have ever been a fan and things often happen that I have never experienced before. It’s all part of the adventure for me.

So, I’ve been considering. What does it mean to be part of a fandom? What are the personal costs and stresses of being so involved? And why, oh why do fans — and in particular Outlander fans — turn on each other at times?

So, when you want to know something, go to Wikipedia, right? Here’s how a fandom is described:

A fandom is a subculture composed of fans, characterised by a feeling of empathy and camaraderie with others, who share a common interest. Fans are typically interested in even minor details of the object(s) of their fandom and spend a significant portion of their time and energy involved in their interest, often as part of a social network.

The recent online incident, “Tuna Gate,” got me wondering where the empathy and camaraderie of at least some sectors of the Outlanderfandom have gone? Why, and at what point does it break down? Why are online fan interactions so much more likely to be negative than face-to-face meetings? How is it that we may insult and demean each other and presumably think it‘s OK to do so?

I think there are many issues at play, primarily:

Like you, I get pretty emotional about the Outlander story. The books, and the show, speak to me in a most mysterious way that I have never felt before. I’ve given up wondering why, and I know many fans feel the same. We are Obsessenachs proud and true. And as a recent Outlander immigrant — I started my journey in 2015 — I can’t even imagine the strength of that feeling for people who have loved these stories since the books first arrived in the 1990s. 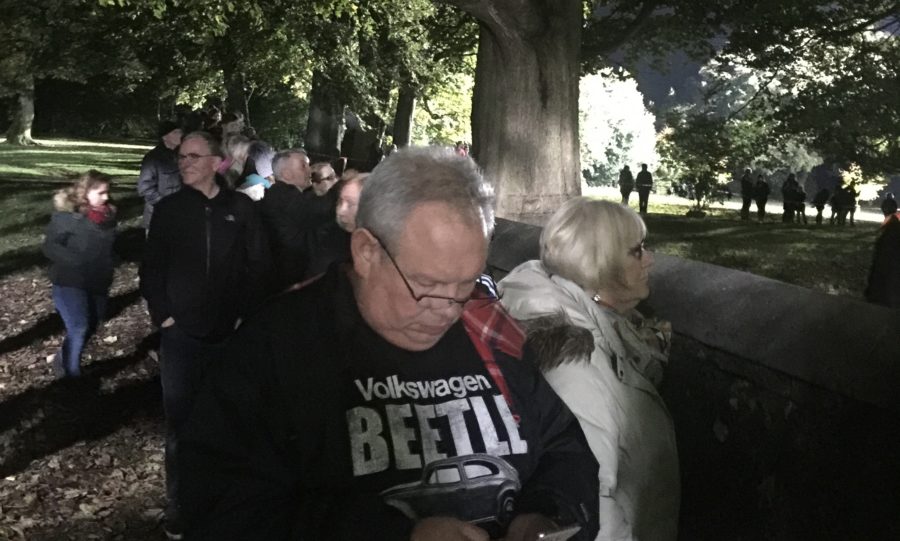 Lately, the online Outlander fandom skirmishes seem to have moved up a notch: notably with Terry Dresbach over costume reveals, Matt Roberts who felt the need to close down his Twitter account (we can only presume that negativity was getting him down) and finally the recent ‘Tuna Gate’. I want to use this example and compare real life fan relationships with online fan relationships.

For any fans who were temporarily living under a rock and missed it,  Sam Heughan was on holidays in Hawaii, where he went on a fishing boat and was spotted in the background when some pretty ugly events took place with a big fish and a baseball bat and some people laughing and cheering during the proceedings. I’m just mentioning it again as an example, not to get into a stoush about the pros and cons of killing fish in that manner, but to examine what happened in the fandom in the ensuing days.

People separated into three camps — those who were aghast at the events and felt that Mr. Heughan was on some level culpable; the fact-checking group who sought to give information on fish-killing methods; and those who felt the need to defend Sam Heughan to the hilt. The first group put up some pretty emotional, inflammatory and derogatory comments mainly directed at Mr. Heughan and his associates, while the latter group became very vocal, defensive and at times abusive to the first group.

I saw comments labeling people who objected to the incident as “crazies.“ “nuts.“ “maniacs,“ “halfwits,“ “shameless“and “over-the-top vegetarians“ seeking world domination! I have to mention here that as a mental health professional, I am very sensitive and cringe when people use terms like “crazies,“ “maniacs“ and “nuts“ as insults. This is so demeaning to people who live with a mental illness and struggle to get past these unfortunate labels.

They were even labelled as trolls in some places. As an FYI, the urban dictionary defines trolls as A person whose sole purpose in life is to seek out people to argue with on the internet over extremely trivial issues.

There was such a stramash that Sam Heughan made a statement to the effect that he was having a cultural experience with good people. Many were not convinced by this (presumably because of the amount of frivolity going on) and others were appalled that he had felt the need to explain himself. The leave-him-alone group were then labeled sycophants by the first group. So much anger was expressed, and tawdry “discussion” took place in Facebook groups, with people agreeing that these “trolls” were not true fans, I’m guessing because in their eyes Sam Heughan can do no wrong. The ruckus continued.

I have had a lot of personal interaction with Outlander fans, at conventions, film shoots, award night red carpets and during my travels. Every one of these occasions has been filled with the above-mentioned camaraderie and empathy of a shared passion and enjoyment of experiences. Standing for hours in long queues or in cold and rainy Scottish weather, spirits are high and differences (politics, religion, personal values and prejudices — the things that often divide us) are absent, while people share the Outlanderexperience together.

Fans waited together for hours before the Scottish BAFTA awards in Glasgow (November 2017) and it was REALLY cold! And they were rewarded with meeting Sam Heughan and Caitriona Balfe as they mixed with fans on the red carpet.

In real life, people don’t stand around talking about Caitriona Balfe’s politics or speculating on Sam Heughan’s girlfriend. They rise above the pettiness and just enjoy the fun of it. Why is it not so when it comes to online interactions? Why do we tend to get so hyped up, sometimes saying some pretty horrible things to each other?

It appears that some fans feel such a sense of ownership of our ‘fandom object’ (in this case, Sam Heughan) that our reason may be clouded. Emotion takes over and it’s like squabbling over a prized possession. In real life, and face-to-face, we do not (usually!) behave like this or speak like this to each other. We have filters. We have constraints. We have more consideration and respect for a person who is standing right in front of us. We know that we are all complex beings negotiating the world as best we can through our own experiences, understandings and concerns. We all have a back-story that informs the way we make sense of the world. 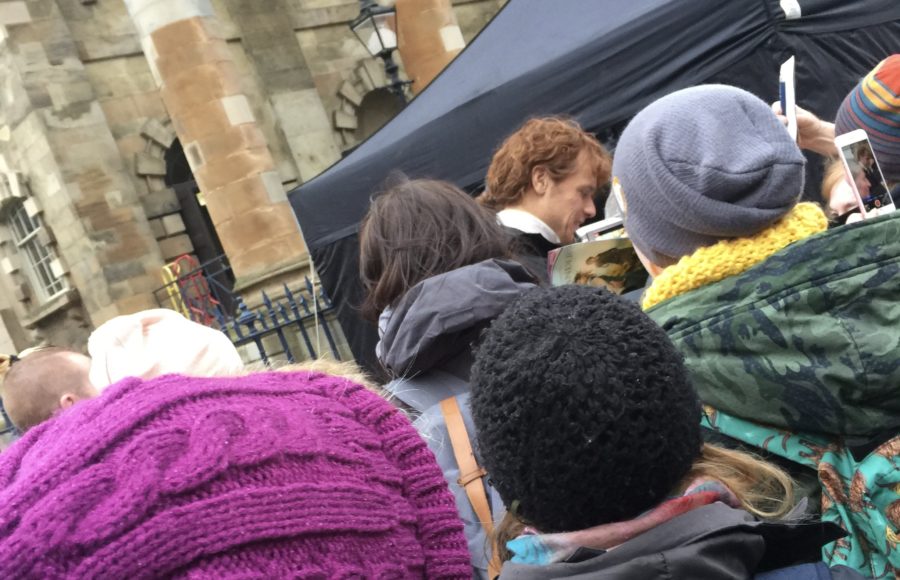 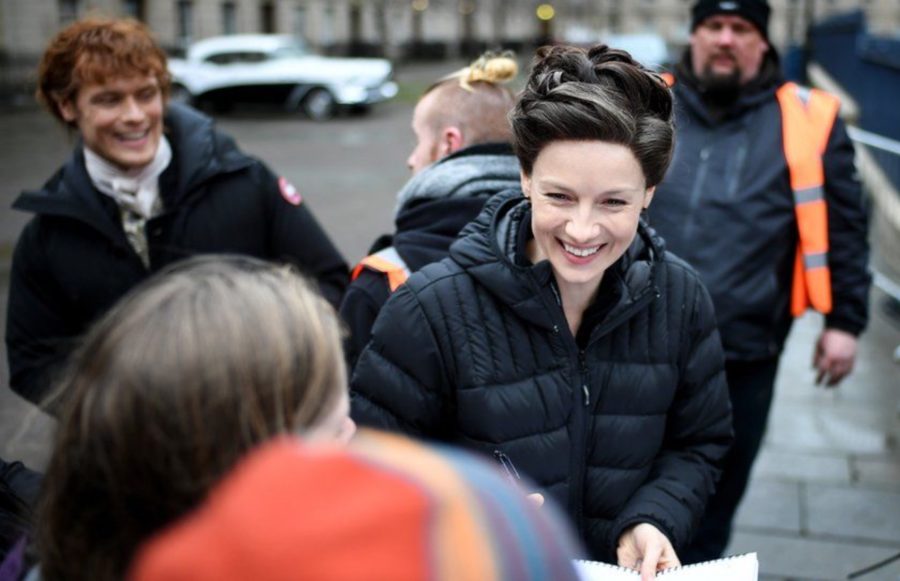 We can all reflect on and examine our own feelings and actions here. Are we contributing to the online community in a positive way? That doesn’t mean agreeing with anything and everything, but it’s the written equivalent to counting to ten if we are angry and counting to a hundred if we are really angry. Is it better for us to practice tolerance, and understand that although we have a central core focus, we are all probably very different in many ways? A key skill in dealing with personal differences is to discuss the issue, not attack the person.

We can be tolerant and compassionate. Thoughtful rather than emotional. Understanding rather than abusive. We can be a community that seeks to support each other, and if we want to offer criticism, we can make it constructive and respectful criticism.

The ultimate question we can ask ourselves: Would we say what we want to say if the person was standing right in front of us? Anger breeds anger, compassion breeds compassion. It’s us, not them.

Would you like to make a point about online interactions? Maybe you have suggestions for how the bar could be raised? Let’s share our ideas here.