(First posted at outlandercast May 2017)
People have many ways of dealing with Droughtlander. Some obsessively rewatch episodes, others re-read the books for the nth time, others have tiny forays into the world outside Outlander. Some decide to walk. Walk, trudge, march (caper about?) and just generally get moving in a forward direction. It gets the endorphins flowing and relieves some of the angst while waiting for our all-time favourite TV show to hit the screens again. Some of the NewGlasgowGirls – a group who met in Scotland, bonded over Outlander and have remained friends ever since – are doing just that. We are going to take a verra long walk together, specifically the Great New Glencoe Challenge, a 26.2 mile one-day hike through some of Scotland’s most beautiful and challenging countryside.

And we’re not just going to walk further than we have ever walked in our lives before, we are going to raise money for Caitriona Balfe‘s charity of choice, World Child Cancer.

Here’s our story and we invite you to walk along with us.

First, a little bit about the NewGlasgowGirls. We’re an international team – Sabrina  is from Germany, Andrée is from Australia, Naomi is from England and Ren (who originally hails from Malaysia) lives in Glasgow. Because it’s such a huge undertaking for us, and a fundraising effort (more about that later), our other two NewGlasgowGirls are working as our back-up team/ground crew. Morag is in Scotland and we’re calling her our logistics manager, and Dora, in China, is providing back-up support on social media, general cheer-leading and ‘international relations’. Right now, we are scattered all over the world, so our planning takes place on Whatsapp and Twitter … and at some pretty crazy times of day due to our time differences. 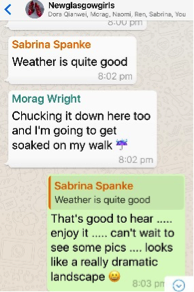 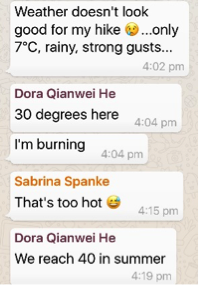 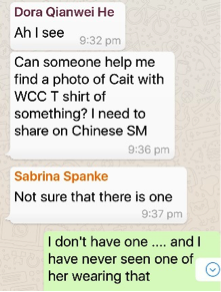 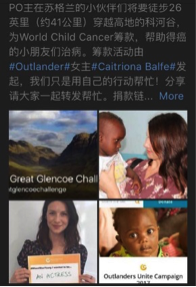 In July, we’ll be in Scotland (all except Dora … sob!) to participate in the Great Glencoe Challenge, a one day, 26-mile trek in the Scottish Highlands. Are we mad? Or like so many others, did we just get really enthused by Sam Heughan’s My Peak Challenge? We think we can do it, but time will tell. Andrée and Sabrina are “peakers,” but Andrée is new to it while Sabrina is an old hand. So, how will we go?

Right now, we are doing lots of walking to prepare. For motivation, we’re using some Outlander-inspired ideas. For instance, one walk has us envisioning the 12-mile march of the Jacobite troops the night before Culloden when they attempt an attack on Cumberland’s troops during his birthday party. Jamie’s suggestion is accepted by the prince, and the cold, hungry men have to walk 12 miles, only to turn back again when the Bonny Prince gets lost in the dark. Voyageroffers other suggestions, such as when Claire arrives at Craigh na Dun and must travel 40 miles to Inverness – no mean feat with no visible mode of transport available. But then, Claire is rarely daunted by any challenge! For Glencoe, we have to walk 26 miles. Can we do as well as the Jacobite soldiers or Claire on her quest to find Jamie after 20 years? If Claire and Jamie can do it, we can, too! (we think!)

Here’s a little bit on who we are:

I’m 63 years old, so I’m actually feeling pretty overwhelmed and daunted by the whole prospect. It took me a while to pluck up the courage to sign up, but once I’d done it I started to set my sights on the target. I hadn’t even done much walking at all until 2016, when I went on a walking tour of the Scottish Highlands. That was one of those life-changing experiences you might say. Already an obsessed Outlanderfan, I was immersed for a week in those landscapes from the show and the book that had so mesmerized me. I couldn’t wait to get back for more. I live in Tasmania, which is that not-so-little island at the bottom of Australia. Since our climate and our terrain are not unlike Scotland, that should give me a head start, right? And so, I started walking – a lot.

I’m in my fourth month of the MPC2017 exercise program and [mostly] feeling great about it. On top of that, the Great Glencoe Challenge organisers have created an exercise regime, which basically involves a lot of walking up hill and down dale, and a lot of time. How to combine the two? I sought advice from John Valbonesi. Ye’ ken him, right? Along with Sam Heughan, he’s the head coach for My Peak Challenge, Sam’s original Outlandercoach and partner in crime, if you will. Proprietor of Everyday Athlete Gym in Glasgow, he inspires many to improve their health and fitness. He nicely gave me the heads-up on what to prioritise and how to approach it. Expert advice? Yes, that’s what I needed. I will arrive in Scotland a month ahead of the event and John said that even an old fogey like me could attend his gym for the final preparation ahead of the event. So, that promises to be the total #MPC2017 experience. The rest is up to me (as Claire would say).

Sabrina was actually our inspiration for the team challenge, being the only one of our group who participated in #MPC2016. Her stories of great health and personal benefits inspired us. We started to think about the individual benefits we may all experience from the program, not to mention the great community camaraderie.

Sabrina lives in Germany and is a regular visitor to Scotland. She can’t get enough of the place and decided to come back (this will be at least her third Scottish sojourn this year) just to join us in the team for this event. She has to be back at work in Germany the day after the walk! We hope she can walk then but, of course, she is young and fit so it should be a case of no problemo! Sabrina has traveled and hiked extensively in Europe and is no stranger to the terrain we will encounter on the walk. She’ll probably be way out in front paving the way for the rest of us.

“I hadn’t hiked for a very long time (was mostly part of my time at university),” she says, “but #MPC made me do it again and also made me realise how much I missed it. Unfortunately, time and money prevent me from hiking as often as I want.”

Sabrina’s hiking and training plans before the challenge include a wee hike in Saxon Switzerland doing what they call in Germany, “Schrammsteine.” There are lots of stairs and an amazing view when getting there (see picture!). She already went there last year and thought she could squeeze that in! FYI, it’s not Switzerland; instead it’s in the German part of the Elbe Sandstone Mountains. Two Swiss artists, back in the 18th century, were just reminded of their home country when seeing the landscape – hence the name. 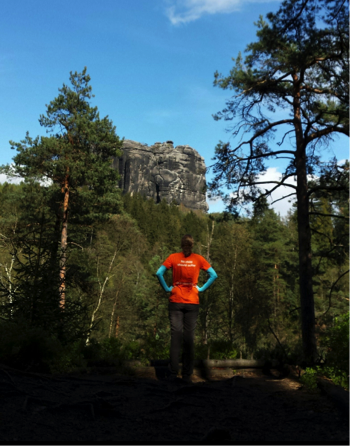 Ren – walking and cycling in Scotland

Ren has lived in Glasgow for 18 months, so she’s practically a local now. What an adjustment to come from the tropical climate of Malaysia to Scottish weather conditions, but she has made that transition. It was Ren’s idea to try the Great Glencoe Challenge, so we said, why not? Not only would it distract us from the ever dreadful #Droughtlander, but it would be an exciting test and – without a doubt – a fun time. Ren is young and very fit already, although this will be the first time she’s walked a distance of such calibre in 12 hours.

“I previously lived in Manchester, which was close to some great walks and sights in the Lake District and Peak District, but I’ve only ever attempted leisure walks of a long distance,”she wrote to us. “Nothing as excruciating (daunting, if I’m perfectly honest) as the Great Glencoe Challenge! Have you seen the training recommended for this?!? With a full-time job, coupled with the weather in Scotland (which is dreich if not wet 95% of the time), it would take too much will power for me to fully keep to this training programme, but I’m trying to stick to it as much as possible!’

Ren is a keen cyclist who rides her bike everywhere, even in extreme weather conditions “If you can cycle in Scotland,”she says, “you can cycle anywhere in the world.” The other day, she had a close encounter with a fox on her way to work! So if she’s not at the gym during the weekends sweating her ass off, you’d probably find her cycling to Greenock or Lochwinnoch.

Naomi – walking in England and Scotland

Naomi hails from Warwickshire and is also a regular visitor to Scotland. She has traveled extensively around the country, including a recent visit to Glencoe for a reccy (that’s Australian for reconnoitre) – even if it was from the comfort of a warm and cosy luxury vehicle! She’s seen where we are going and she’s up for it, so that’s the main thing!

“I often find I’m either too tired after work or just don’t have time to exercise as much as I’d like, so I’m making an effort to increase my physical strength and to improve my stamina over the next couple of months in preparation for the challenge,” she says. “Although I walk a lot with my dog, it is often on flat ground so I’m searching for more demanding walks to help me with the uphill terrain of this challenge!”

As well as a major life experience and personal fitness challenge, we want to do some good in the world too. By participating in #MPC2017, Sabrina and Andrée are supporting Bloodwise, the charity Sam Heughan champions.

Sticking with the Outlander connection, we will support Caitriona Balfe in her good work with World Child Cancer. Our team will raise money for WWC through sponsorship of our walk.  All donated funds go 100% to World Child Cancer, and we have set our goal at 2000 British pounds. We’re actually hoping, with your help, to go way past that. 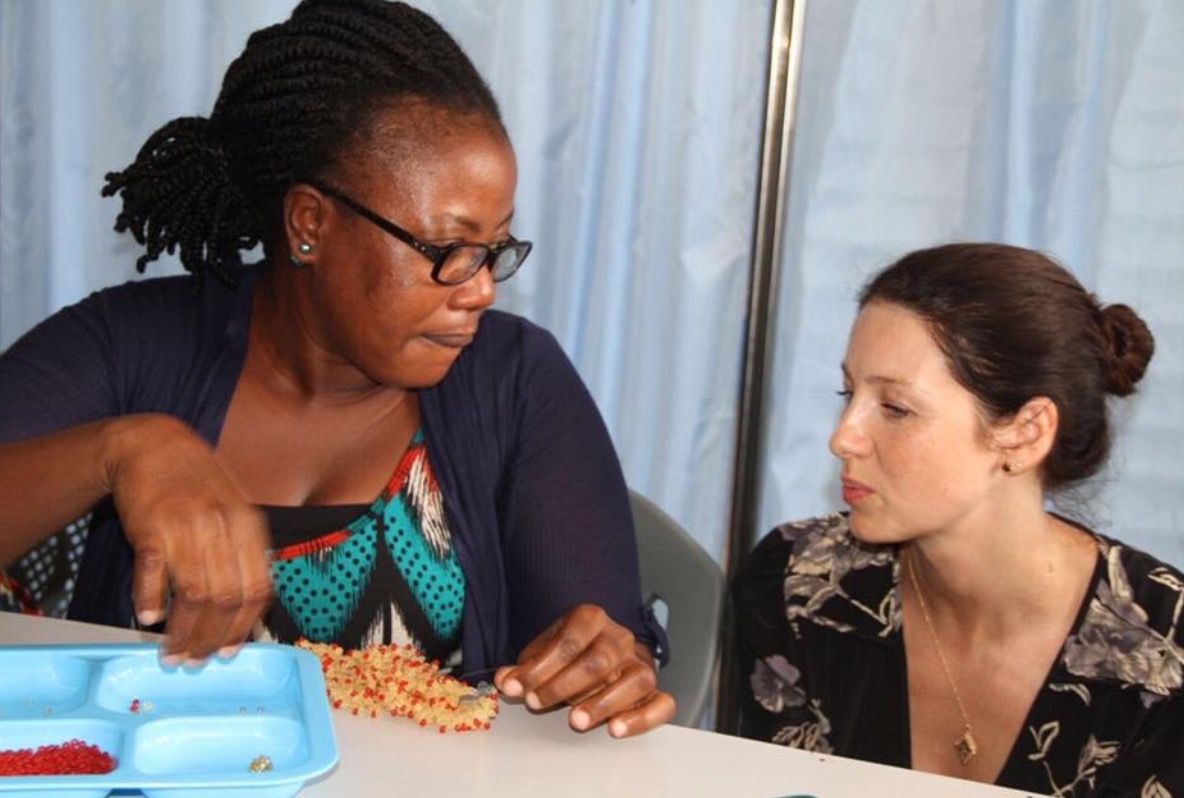 We will be reporting on our success in my next blog posts. Meanwhile, we’d better get training. Sabrina suggests that we have our final pre-event practice by doing the Schiehallion walk in June. Translated as ‘fairy hill of the Caledonians,’ Schiehallion is 3,547 ft (1,083 m) high, has an almost perfect conical shape when viewed from the west, and is isolated from other peaks. Hillwalkers, locals and visitors refer to this hill as the Matterhorn of Perthshire. We can test our mettle there and bag our first Munro.

We invite you to join us for the adventure and to share your own peak challenge preparation experiences in the discussion below. Is anyone else doing the Glencoe trek? We’d love to be in cahoots with you too! Share the joy …. and the pain.

Please support our walk, and thank you!