(First posted at outlandercast November 2018)
At last we see the Frasers at River Run, and boy what a wild ride to get there. Poor Lesley (Keith Fleming) met an untimely demise at the hands of our new demonic villain, Mr. Stephen Bonnet, and there was mega trauma all round. They seemed to pull themselves together pretty quickly though, and nary a scratch or bruise in sight! So now we find the Frasers confronting some different kinds of demons, the world where slavery is accepted, and Claire is not having a bar of it. 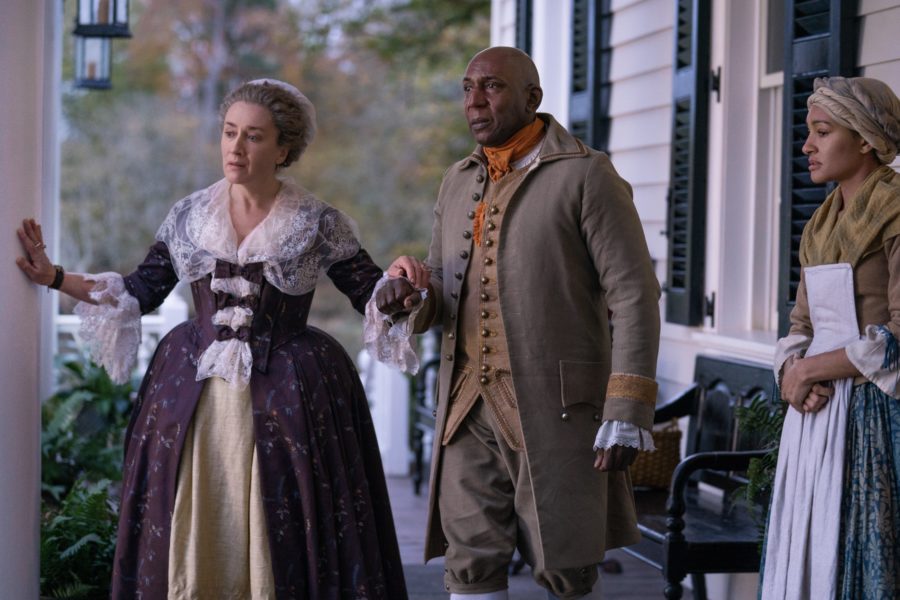 Just before I left Scotland, we took the opportunity to go and have a wee scout around for River Run. It’s an iconic Outlander location, as book readers will know, with lots of action set to take place there over time. Jamie, Claire and company have many adventures at the home of Aunt Jocasta, not to mention a fair measure of amorous encounters involving our favourite couple. Will they have competition from newcomers in that department? Time will tell, but meanwhile… break out the fans, you’ll need to cool off!

Although almost as important as Lallybroch in the Fraser saga, River Run will not become a site for Outlander pilgrimages because it is not a real building. Unlike Lallybroch (Midhope Castle), with its crumbling yesteryear charm, River Run is a built set, with a lot of CGI thrown in to complete the picture we see on our screens. As Matt Roberts and Toni Graphia have explained, it is a different story organising locations for Outlander Season 4. Early America needs wooden buildings, and as the series is filmed in Scotland, all the old buildings are made of stone. So, the production team had to set to work finding locations to build their sets. And as always, we can revel in the way these locations are brought to life by Jon Gary Steele and his team. 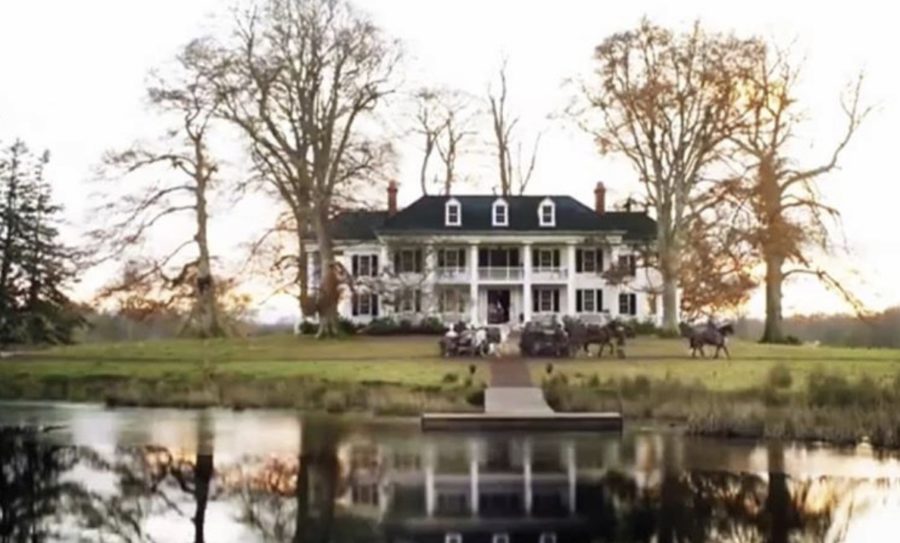 We see River Run on our screens like this. I heard many fans commenting before the show was released that this is not the look of a plantation house. But, once again the Outlanderteam has been meticulous in their research on the look and feel of an 18th century plantation in North Carolina. Here are a couple of examples of the ‘real thing’ I located with brief research. It looks to me like they got it right. However, it does seems that these mansions are often added to over the years and sometimes become a mix of styles. For instance, I’ve learned that Orton House (below) was originally a smaller house and the columns were not added until much later. 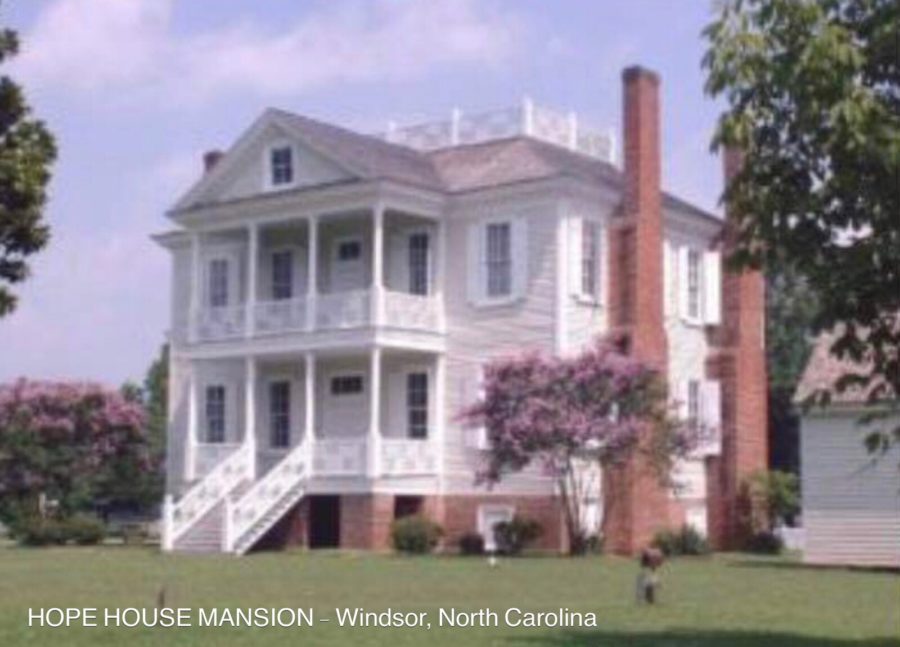 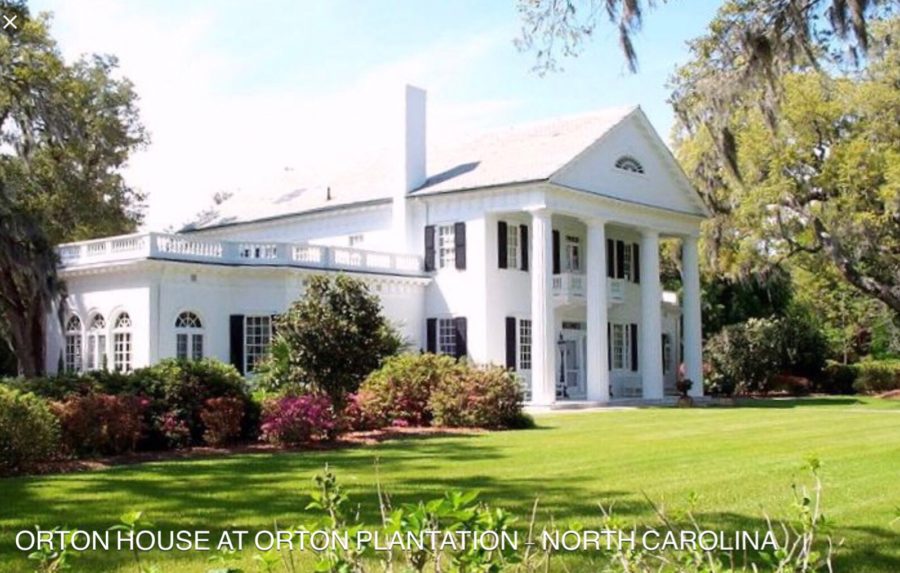 River Run set is on a farm in a beautiful rural location. Local lass Nicole Boyle visited while the site was under construction and she saw the beginnings of the building taking shape. The scaffolding for the blue screen second story was being erected while she was there. The façade for the first floor was built with the porch, pillars and railings, but the second story was merely a blue screen in the shape they wanted to project onto our screens. 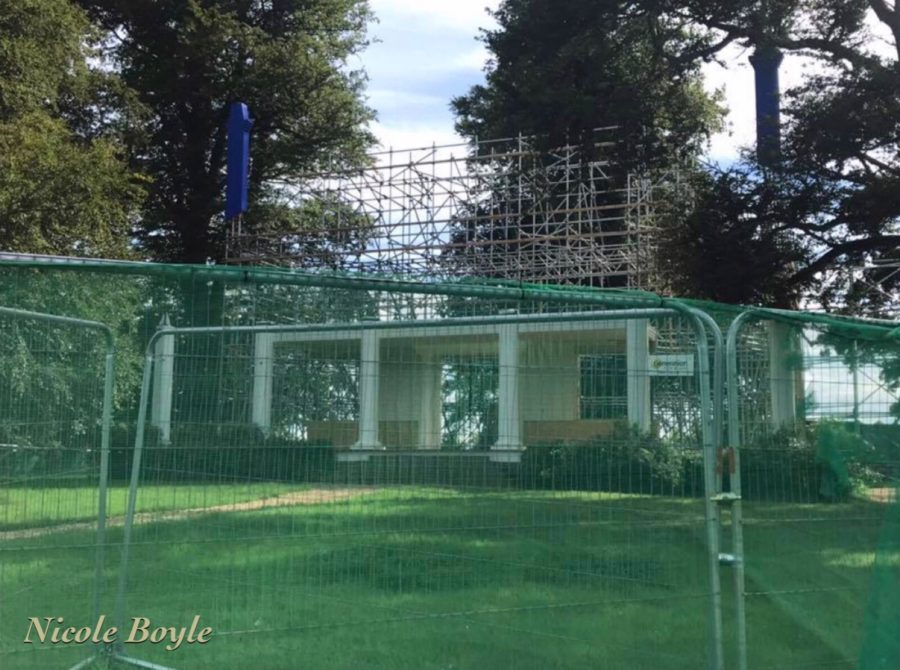 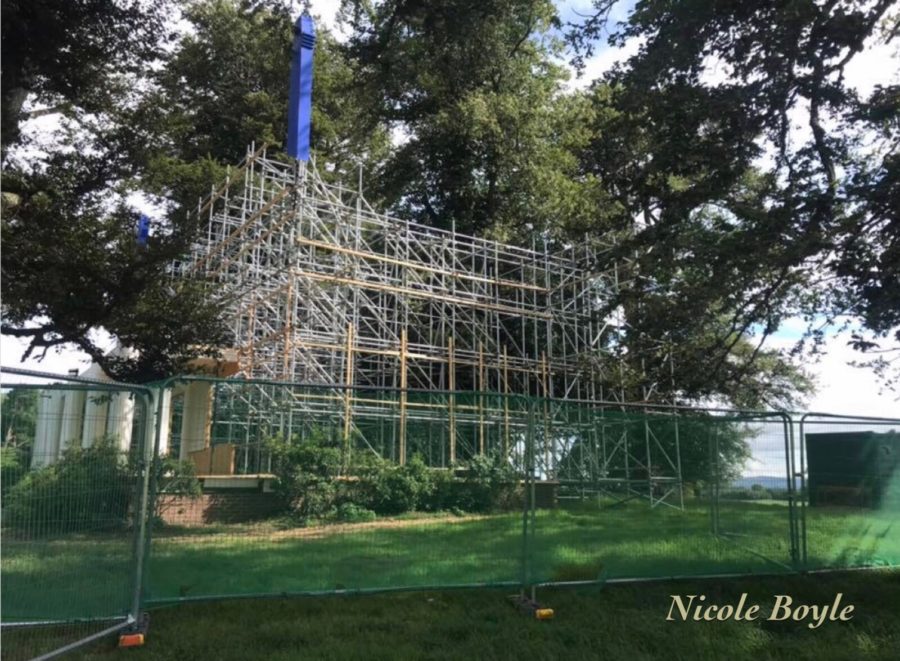 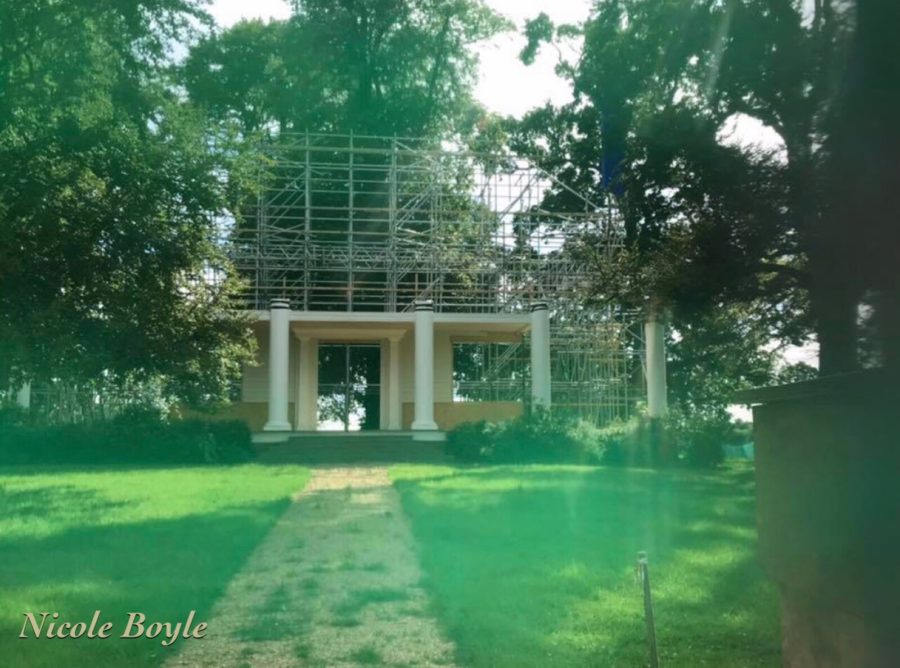 My friend Morag Wright and I visited on a warm and sunny day in June 2018, after the filming had finished. Here are some of our pictures from that day. I’ve also pictures from Matthew Fairley, a keen young fan who we met at other Outlander locations who has generously shared his pictures. 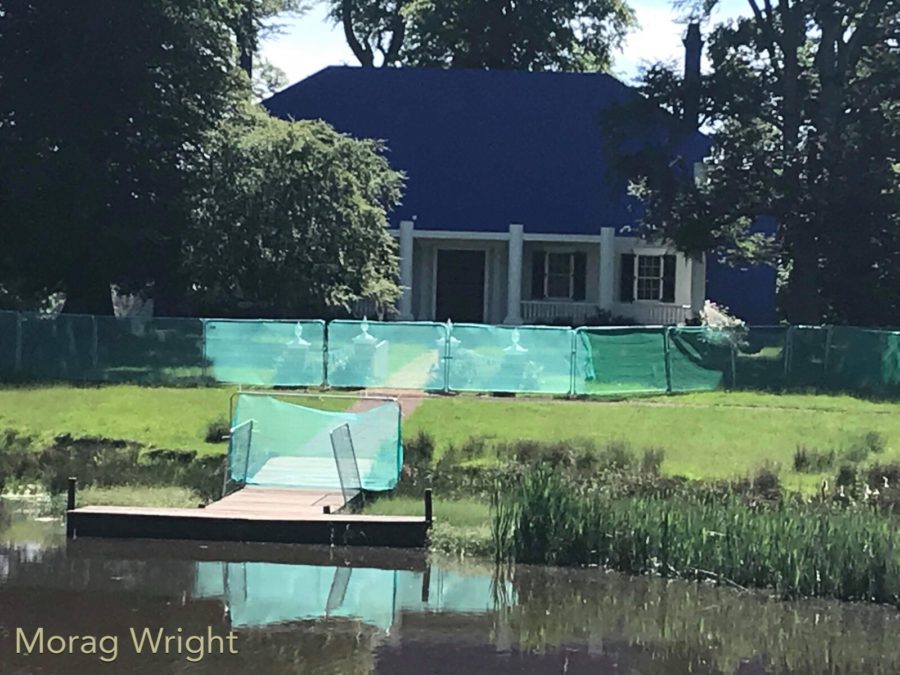 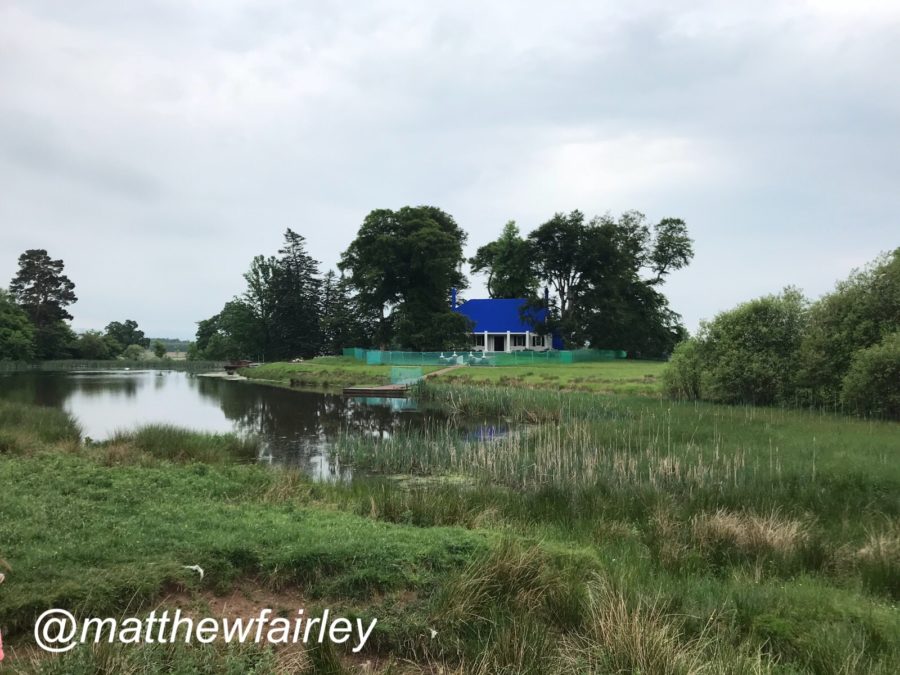 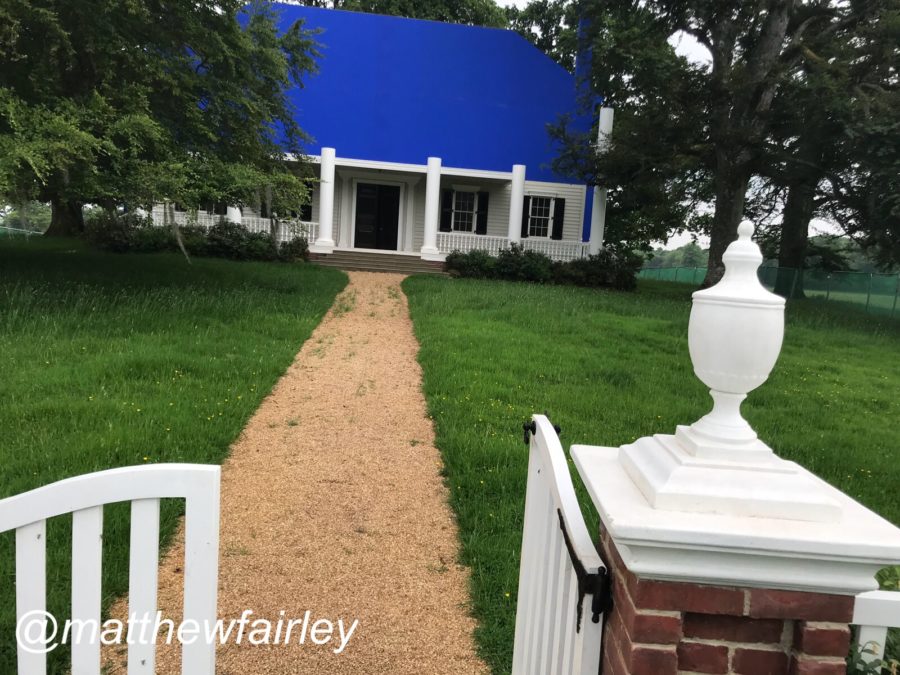 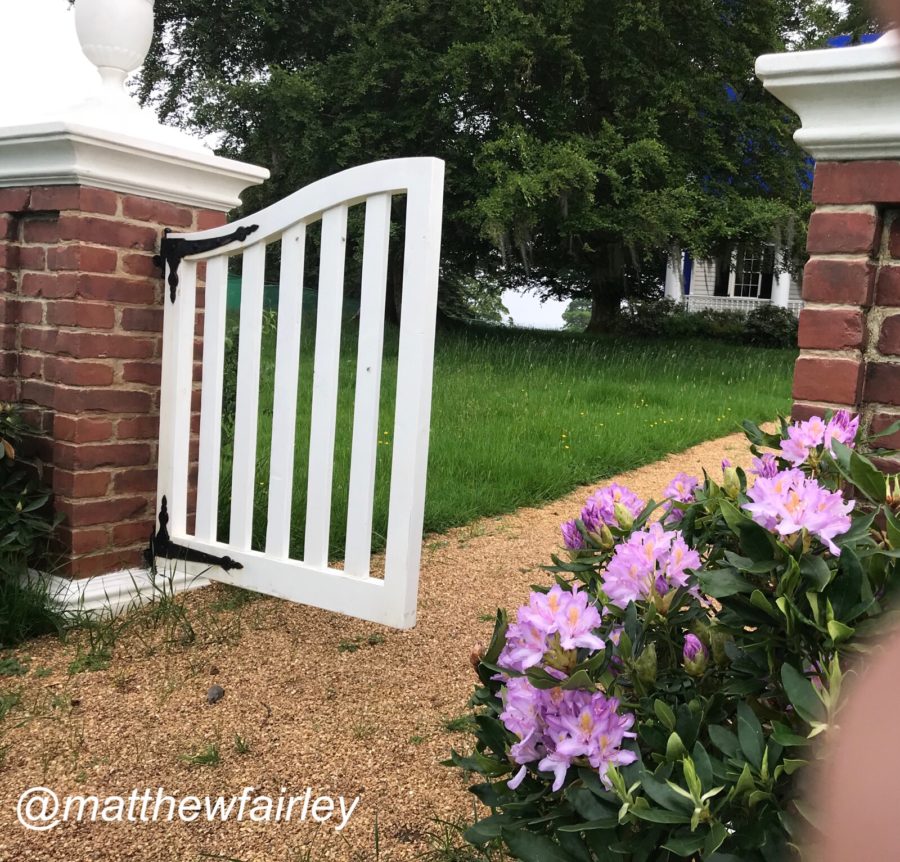 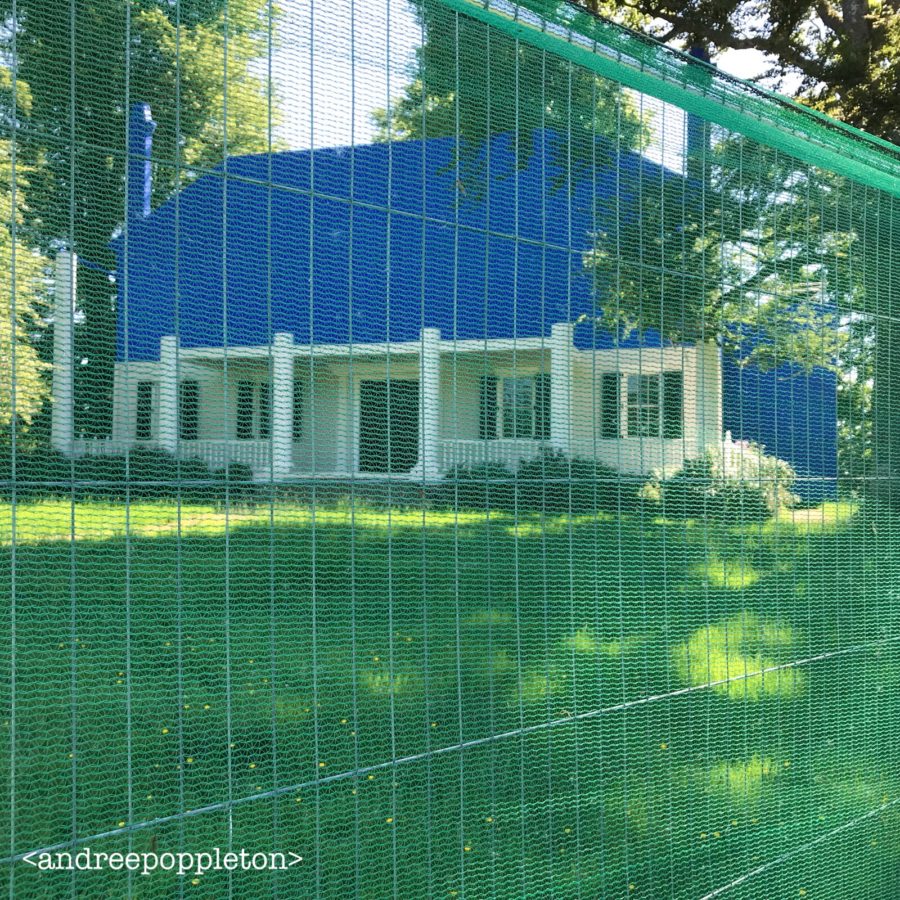 This might sound weird, but I love fences! When I see a fence, I like to ponder the reasons why it was built that way and who built it, and when. The “why” usually relates to the type of critters who are being either kept in or out, as well as the materials that are available to the builder. Sometimes aesthetics come into it, but in rural settings, most fencing is for practical reasons. 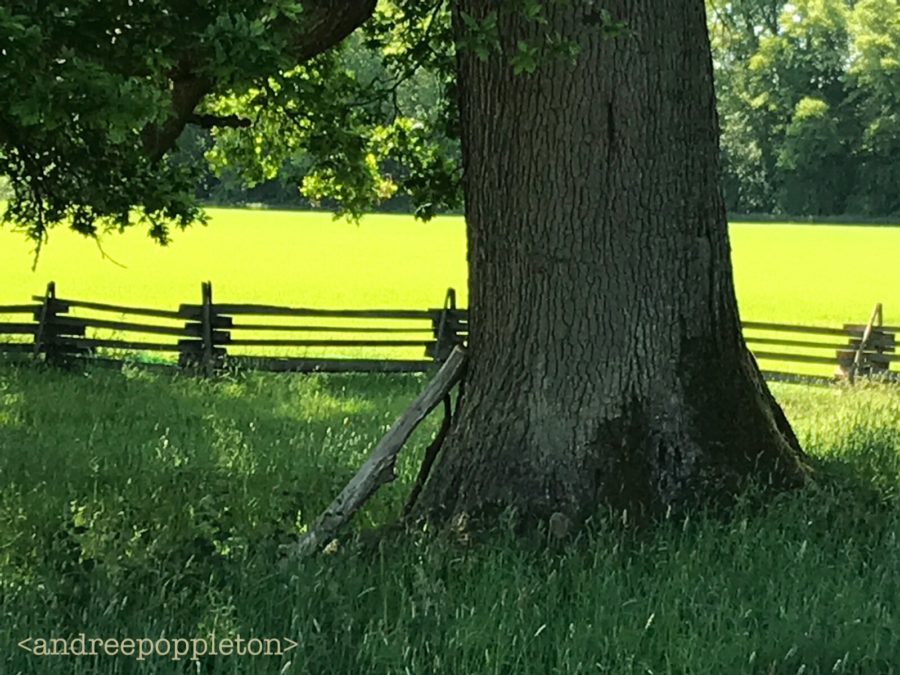 Back in 18th century North Carolina, they did not have nails or wire, so wood was the only available fencing material. On our visit to River Run, we saw that they had gone to the trouble to build a traditional, early-American split-rail or snake-rail fence. In the show, we could just pick this out in the distance way beyond the slaves digging in the field behind the house. Up close that fence looked wonderful along a line of stately trees. The out buildings in the distance were added later by the wonders of … you know. Not to spoil the magic too much! 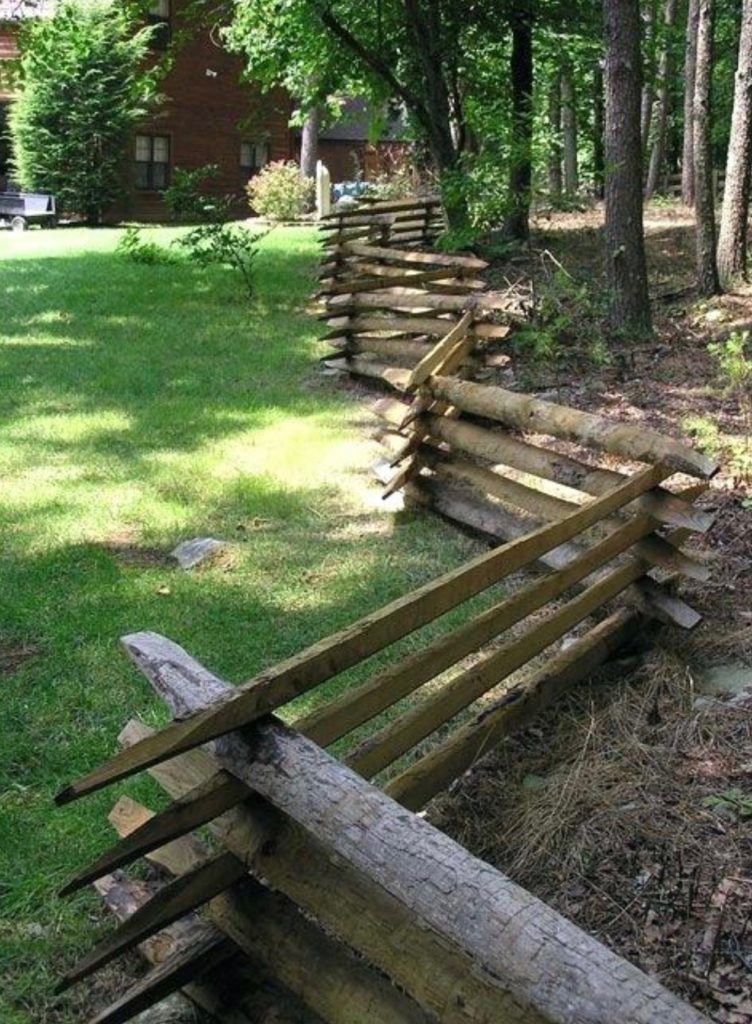 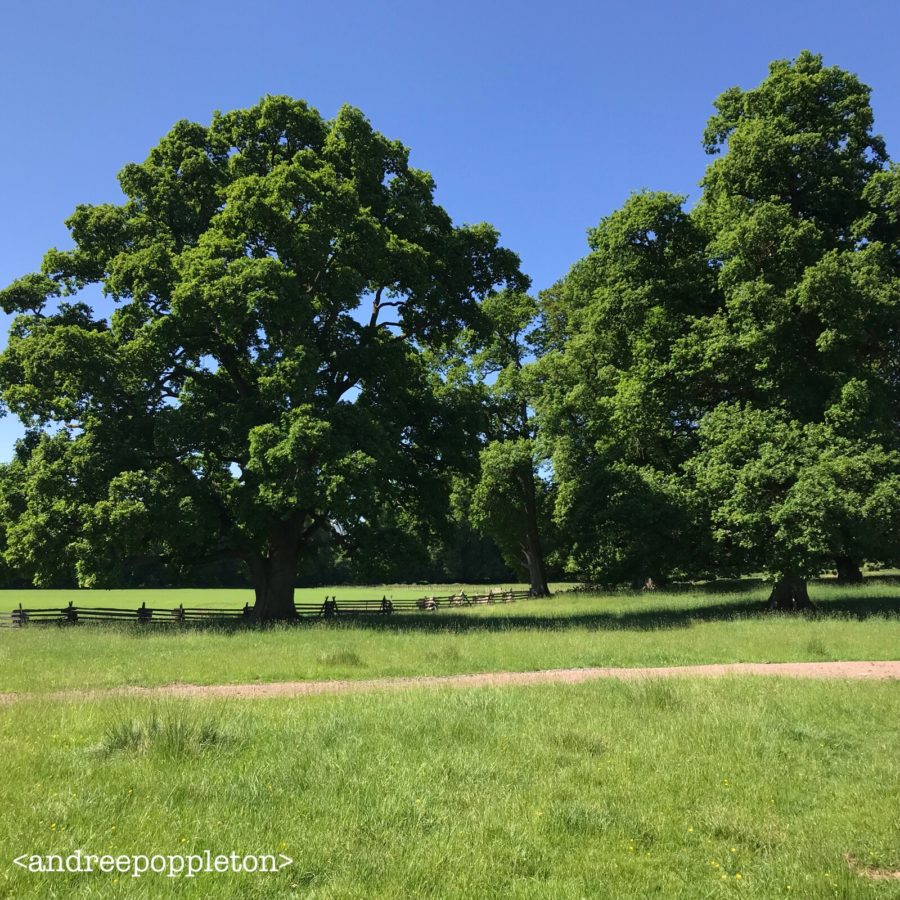 Here are some close-up examples of construction of a snake-rail fence and the actual one on the set. Again, amazing design and workmanship to include such a feature in the landscape.

There is a body of water in front of the house and the Sally-Anne was tied up at a mooring — that little craft of wistful conversations, adventure and mayhem as Claire, Jamie, Ian, Lesley and Rollo travelled up river for their first encounter with Jamie’s formidable aunt. 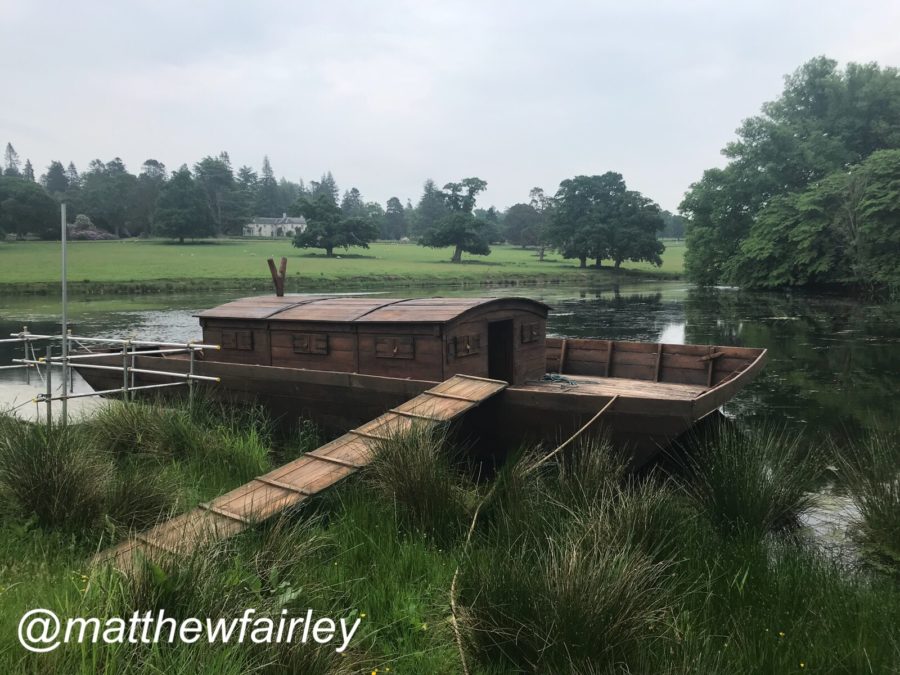 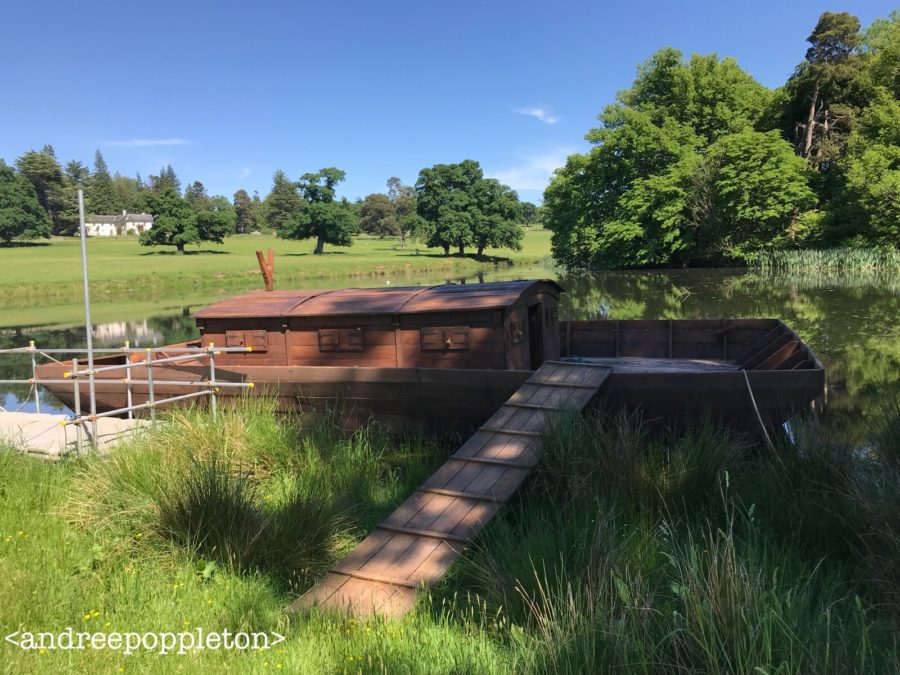 At the end of “Do No Harm,” Maril Davis and Matt Roberts discussed the making and design of River Run, and referred also to the grand interior sets which they built. Maril commented that “it is the details that take it from a set to an actual environment.” And Matt said, “that’s what elevates Outlander, is the attention to the smallest detail.” It surely is a marvellous collaboration between writers, designers, artisans, actors and crew to bring us the final production.

From the looks of “Do No Harm,” things are far from harmonious for Jamie and Claire at River Run. So perhaps we may see our hero, heroine and their loveable entourage heading off soon for their next adventure, and to that place we are all waiting to see in detail. See you next time… maybe at Fraser’s Ridge? 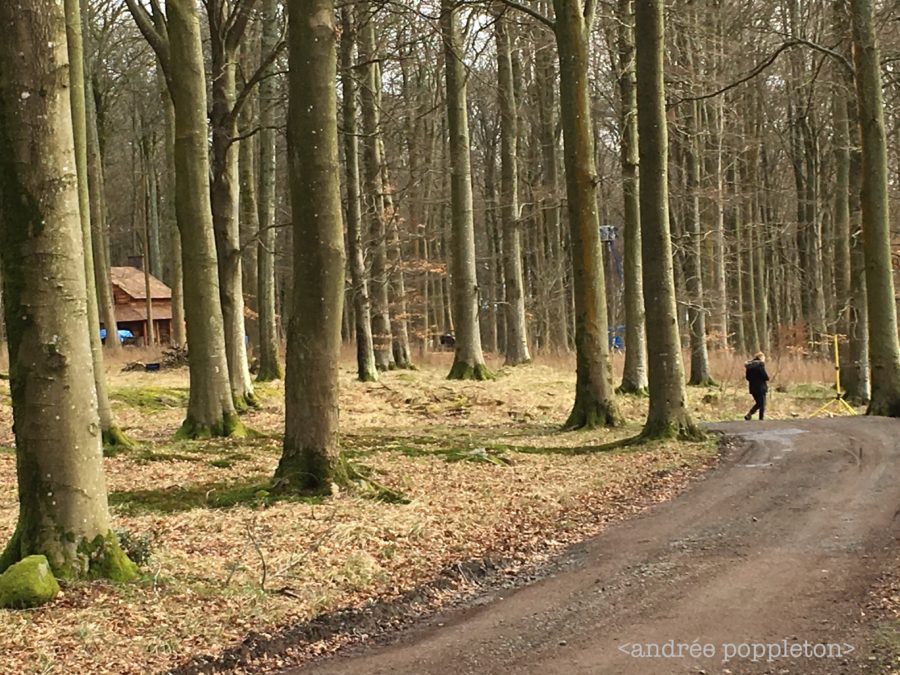 Have you seen any of these early colonial structures in North Carolina or elsewhere?
Do you think the show managed to capture the look and the feel of the era, in both the interior and exterior scenes?

Thanks to the following for the images: Nicole Boyle, Morag Wright, Matthew Fairley and Aimee Spinks/ STARZ.