(First posted at outlandercast November 2017)
The fun began on BAFTAs-minus-one when my house started to fill up (yes, it’s a small house) with youthful red carpet aficionados. Doris came up from London and Sabrina flew in from Germany — talk about dedication. While waiting for Sabrina, Doris and I decided to get into the mood (that’s the word here) by watching Emulsion, a movie starring Sam Heughan in his pre-Outlander days. Then, on a lighter note, we indulged in a few of our fave episodes of our fave show, with a wee dram. Doris’ first taste of whisky, not sure she was very keen but I explained that it is an acquired taste!

Once Sabrina was there, it was all action with these two fan girls buzzing with excitement and planning for the next day’s activities, starting with the Christmas menu (particularly egg nog apparently) at their beloved Starbucks! There was a military precision to their planning – these are seasoned campaigners. They knew what time to arrive and the best places to stand. Getting there really early enhances your chances of “bumping into” the stars who arrive to stay at the hotel. Being a newbie, and one who doesn’t like to stand still in the freezing cold for too many hours, I was taking a more casual approach to the whole thing and said I’d meet them down there sometime later.

The official start time for the red carpet was 5 pm so I started moseying down at about 3. I figured I could stand a few hours in the cold, waiting for the action, jostling for positions. First person I spotted was friend Morag, local gal, so when I saw her wearing UGG boots I knew we were in for Baltic conditions. Usually Morag wears really light shoes with no socks for activities when I’m wearing jackboots and about 4 pairs of socks! She’s a tough Scottish lass, so, I knew it was serious.

A wee digression about the BAFTAs as I know a lot of Outlander fans don’t get why Outlander wasn’t even nominated this year. It’s all about timing. The 2017 awards are given for shows that air between July 2016 and June 2017,  so of course, Outlander missed that timeframe. As a result, there wasn’t a big Outlander contingent at the awards. Caitriona Balfe  and Sam Heughan were presenting the award for Best Feature Film and Richard Rankin was there with his fellow cast members from The Replacement.They won the Best TV show award. And Richard also presented the award for Best Director Factual.

Now, back to the day

Lucky me — I live a 15-minute walk from the Raddisson Blu Hotel, home to the Scottish BAFTA ceremony. Crowds were gathering and as soon as I got there Richard came out to be swamped by fans. He took it on the chin and was sweet to everyone …. Don’t we all LOVE his portrayal of Roger, the subtle ways he has made the character his own? Like when he bumped his head on the car bonnet and the way he pronounces Boston cream pie!

It was a long chilly wait until our favourites showed up on the carpet. But as usual the crowd was filled with lots of good humoured camaraderie and happy banter. Some people are so well organised (oops, not me!). Doris and Sabrina even had original copies Caitriona’s New York Timesarticle for her to sign! Many come with clipboards to ensure they get the best signatures and don’t crumple their pictures. It’s a big deal. For me, I had decided to focus on getting some short videos and pictures to post here and on Outlander Cast Clan Gathering Facebook page. 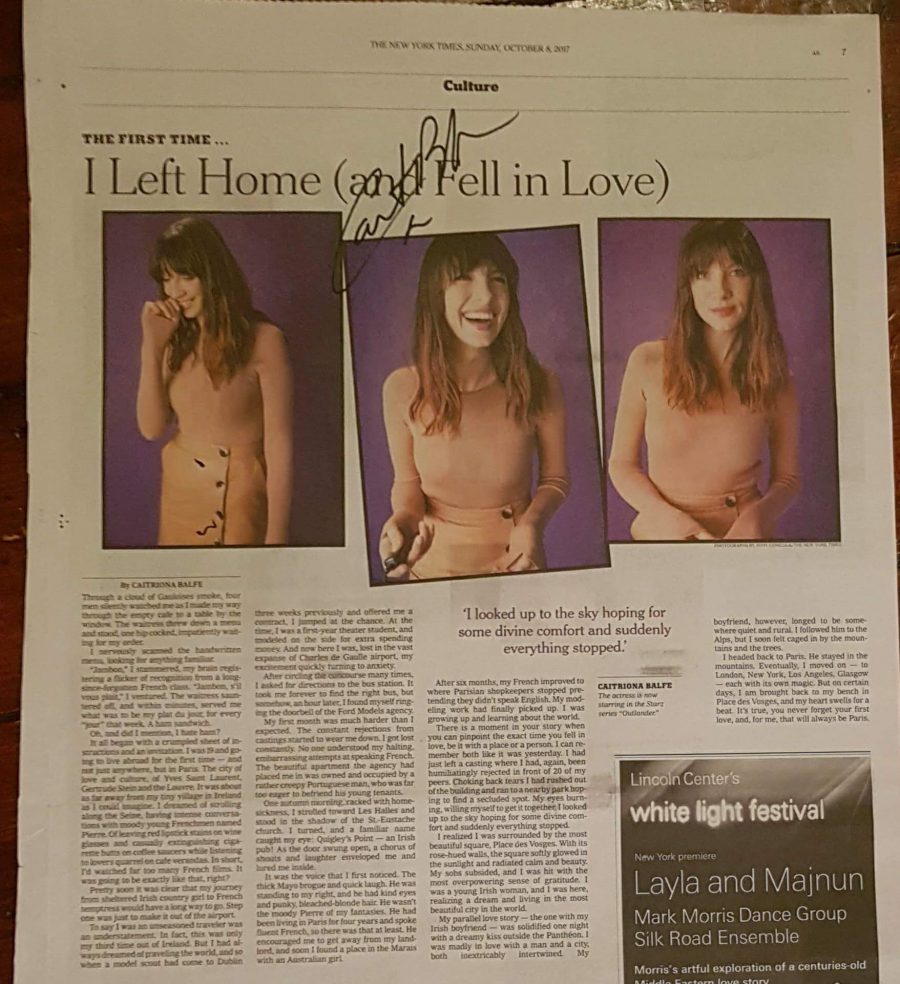 Sam and Caitriona were the red carpet scene stealers for sure. They arrived closely together. Balfe emerged first in a beautiful (as usual) black number; then Heughan rounded the corner all in steel blue. As my Outlander Cast editor, Ashley Crawley, remarked, “Those two should have to pay taxes for looking that good.”

Those two were so generous with their time, as usual, taking their time meeting and greeting all the fans on the red carpet, chatting, signing all sorts of papers and objects, and of course taking all those selfies. It was fun to meet them but of course its only a fleeting moment. Still, the pics are there to show how much fun it was.

I teamed up with a glorious green-haired lass (I wonder how you say that in Gaelic?!) who helped me out big time when my phone started to freeze up at a crucial moment. Ashley Brown was a hoot, of all things a Texan make-up artist in Glasgow. Thanks to her for pictures and fun times chilling-out (literally) at the barrier. That’s one of the things you probably all know – when you go to any kind of Outlander-related event, you just meet the loveliest people.

When it was all done and dusted, we went inside to the warmth of the hotel bar and had our beverages of choice to warm up and debrief about all the fun. And the best thing? Next year, Outlander will be right up there in the running, so let’s keep our fingers crossed for our favourite actors and our favourite show.

Would love to hear about your red-carpet experiences below. Have you met Sam Heughan and Caitriona Balfe? Do tell!