Well, a nail-biting two week break seems a good time to reflect, no? And, let’s face it, right now we mostly have time on our hands. Unless we are those brave folk who are out there caring for the sick and providing the services we need to keep going. We are all so thankful and grateful to those people right now.

Let’s take a close look at the Big House, created by Jon Gary Steele and his production design team. Gary gave us this long view of the house on Instagram, where we can appreciate the scale of the operation. 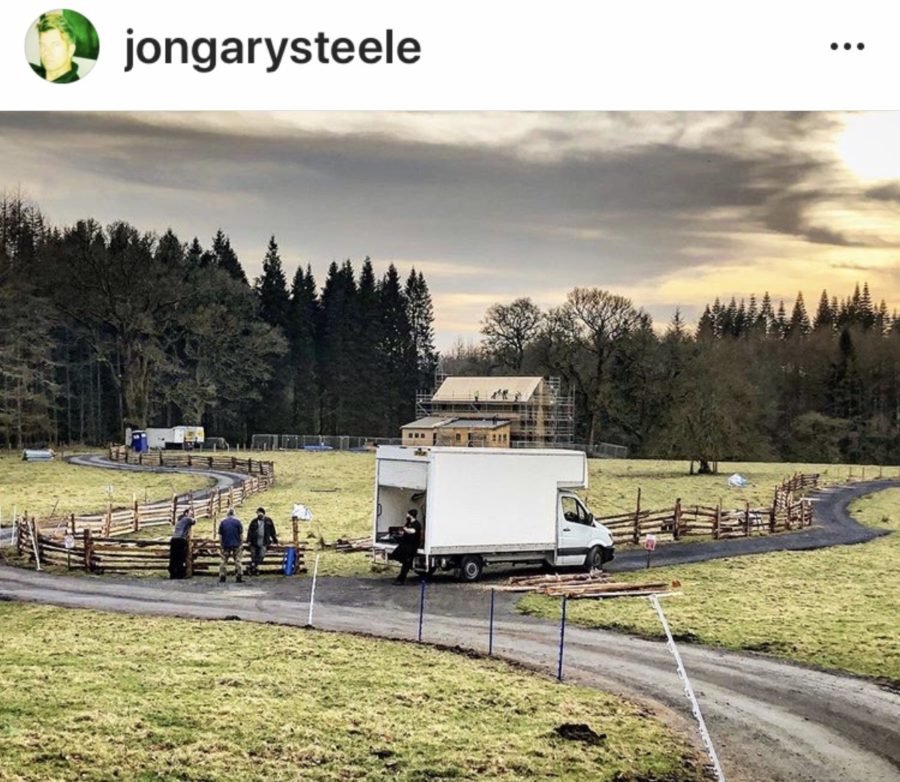 The first thing to say is that it is BIG.

The second question is how did it go up so fast? Before Jemmy was even walking?

Thirdly,  where did they get all those busy people so quickly? The hot shot builders, brick makers, carpenters, painters and decorators? When last season no one would come? 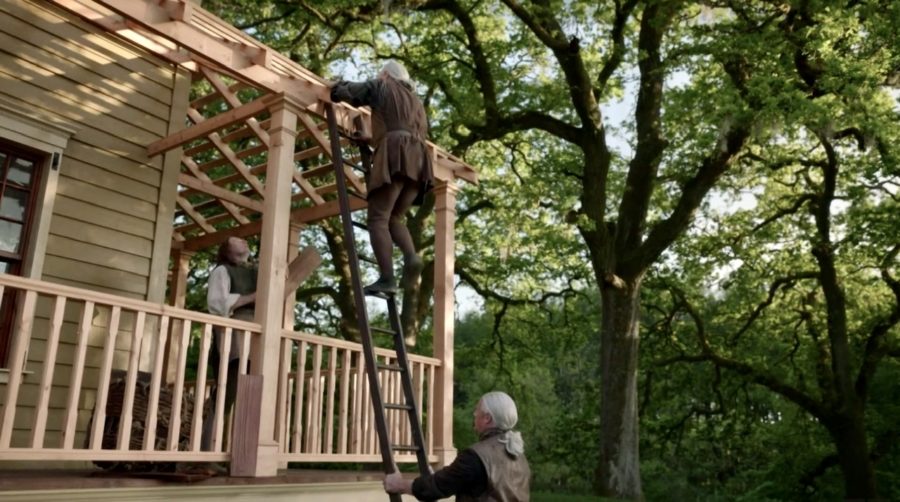 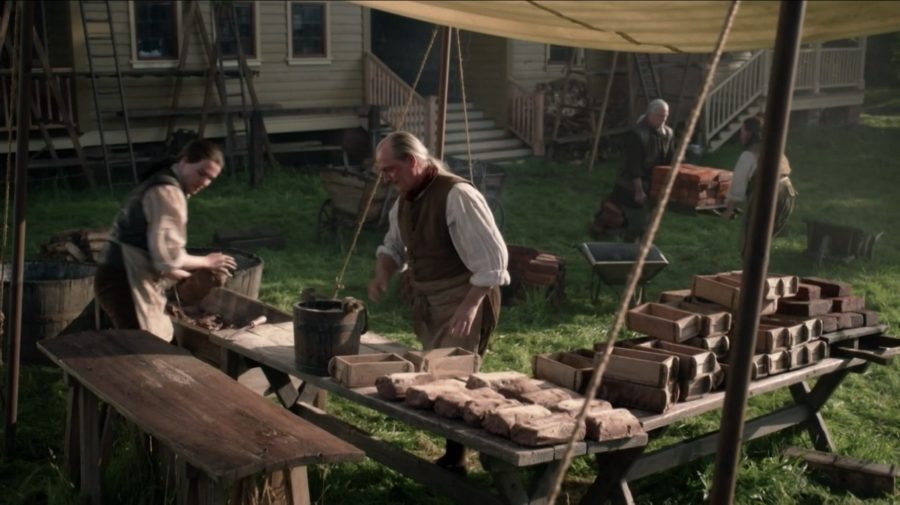 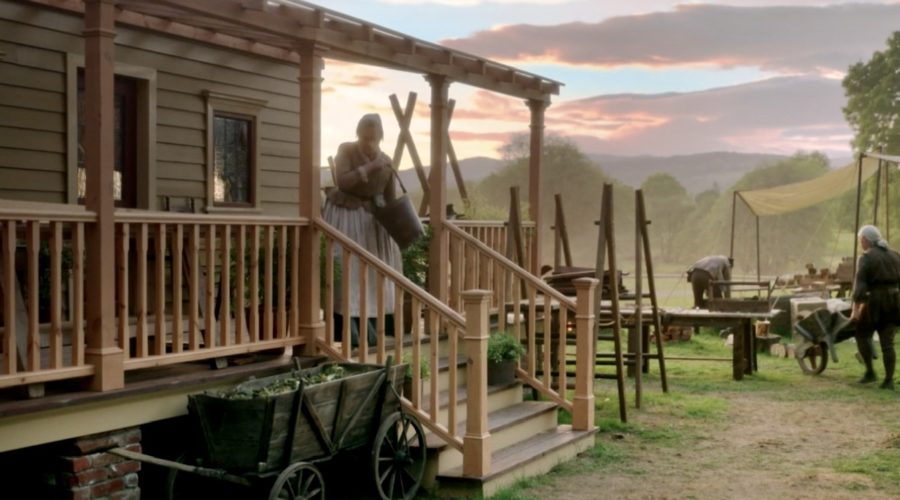 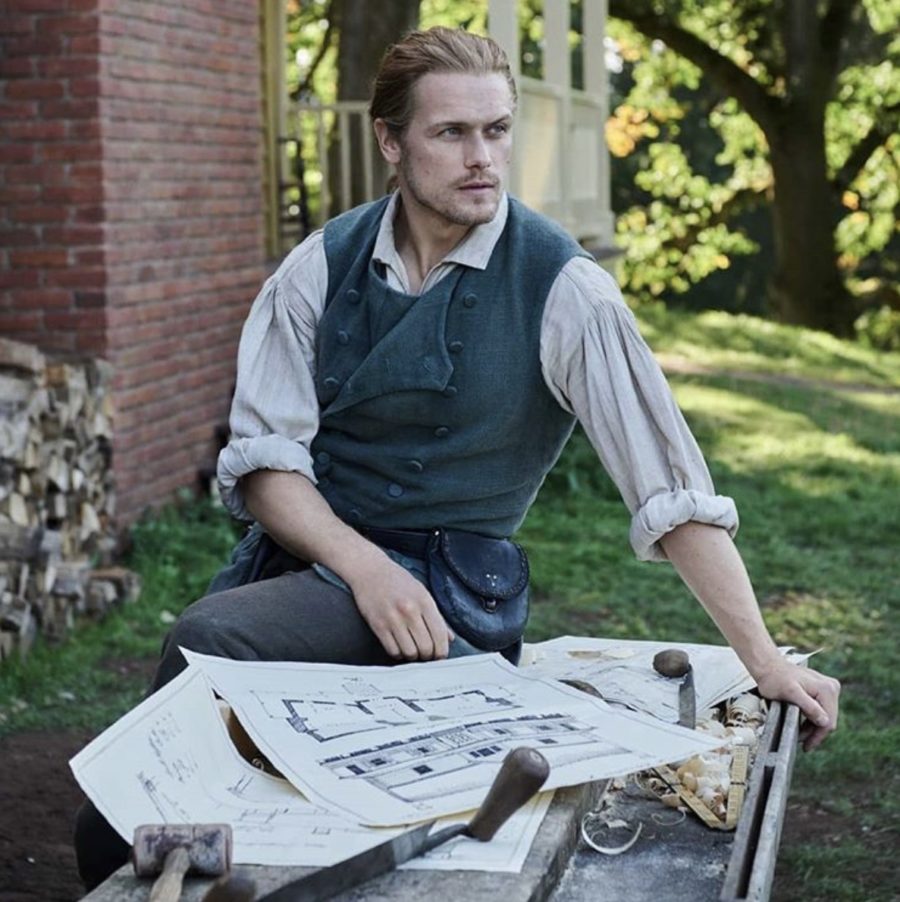 The wonders of television I guess, with Jamie Fraser at the helm — and, of course, time travel. Back to the subject at hand.

Isn’t the house fabulous? And yes, book readers might be surprised by the look of the house, particularly the elaborate and spacious interiors. It’s a mansion compared to most of the tents, wee huts, faerie palaces and cabins that the rest of the local folk abide in. But then, here is the definition of a big house. And after all, Jamie and Claire are of high social standing. Why, they’re the king and queen of the ridge, right?

Executive producer, Matt Roberts made a funny comment about the size of the house. He thought Gary Steele might produce something more modest. But, no way! It was Gary’s swan song this season after all, so he probably wanted to continue to make the maximum impact. Did you see the story that Janet Reynolds and I wrote recently about Gary Steele’s contribution to Outlander? If not, check it out here. We will miss him.

The construction of the exterior was followed by a few intrepid local fans who used a bit of stealth to get near the building site. A few pics sneaked out onto social media, but the location was kept under wraps. 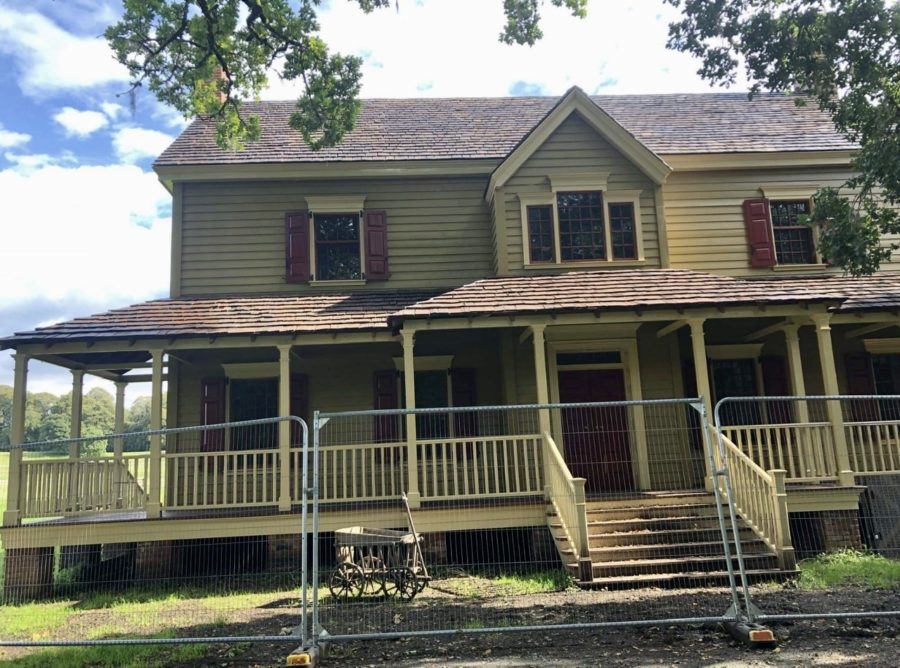 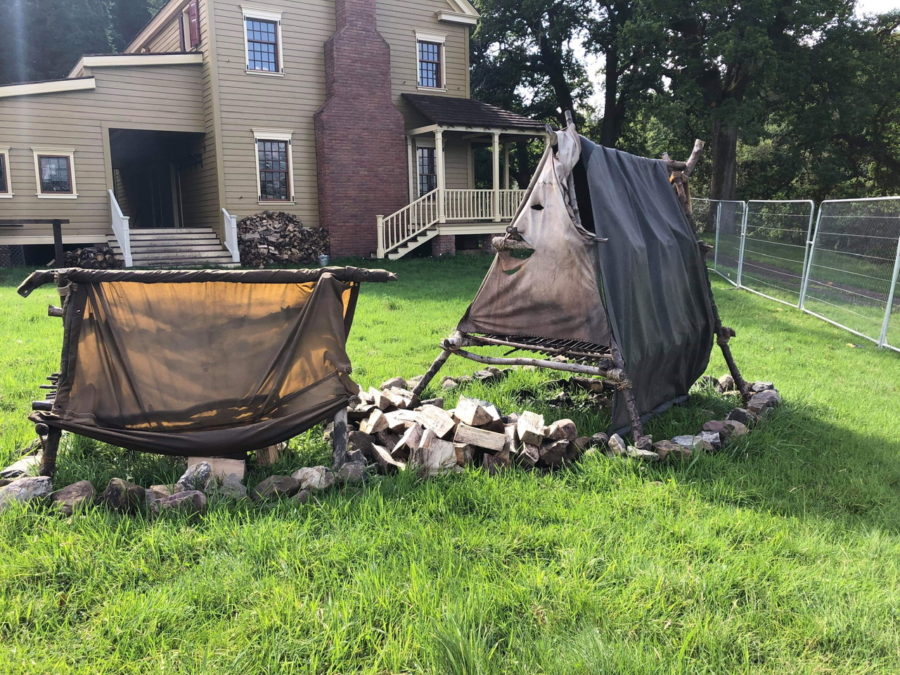 Outlander cast and crew certainly have to handle some adverse weather conditions! 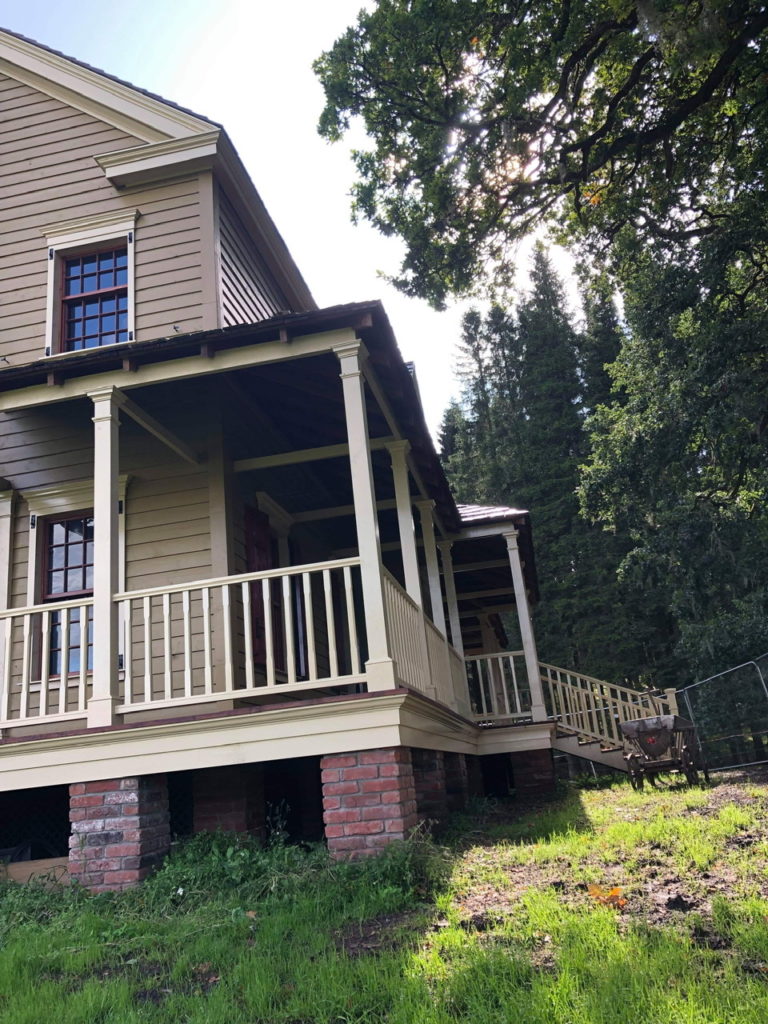 We could see how grand it was going to be and then at last, some advance pics from Outlander STARZ were released, as well as some social media posts from the cast and crew of behind the scenes action.

Caitriona Balfe posted this on her Instagram story after the outbreak of the COVID_19 virus.

In episode #501 we learned that the Big House is not only a comfortable and well appointed family home. It is also a hospital, a fabulous wedding venue and militia muster station. What a scene that wedding was. No wonder it took them seven days to film. So much detail, all the feels and all the fun. And then the kilted Jamie’s calling to the men to stand by his hand was definitely a heart stopper. The meticulous and creative production design really does add so much to the scenes and the stories. 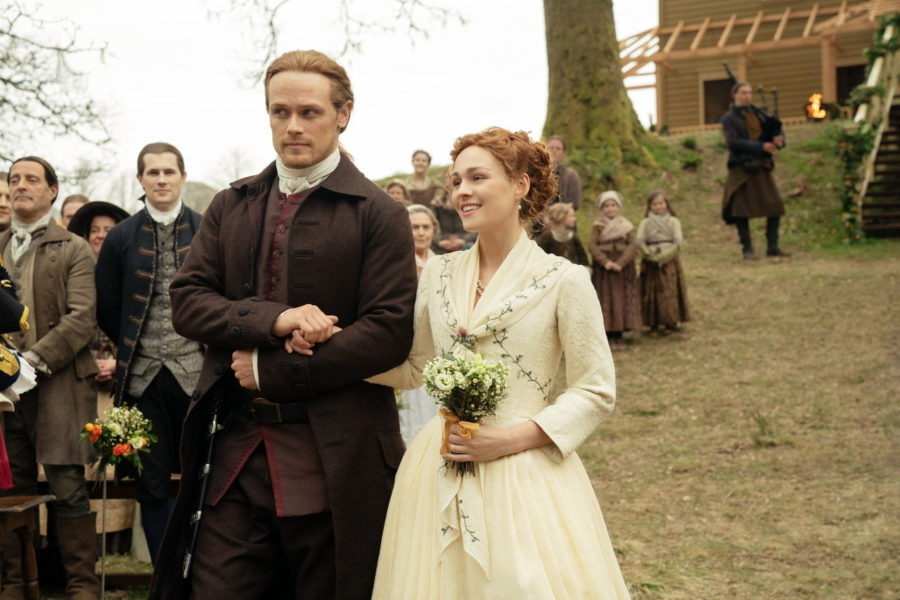 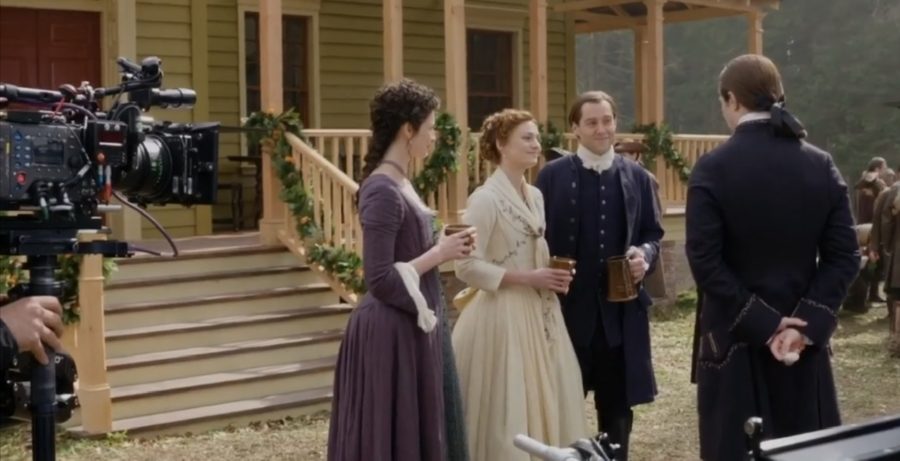 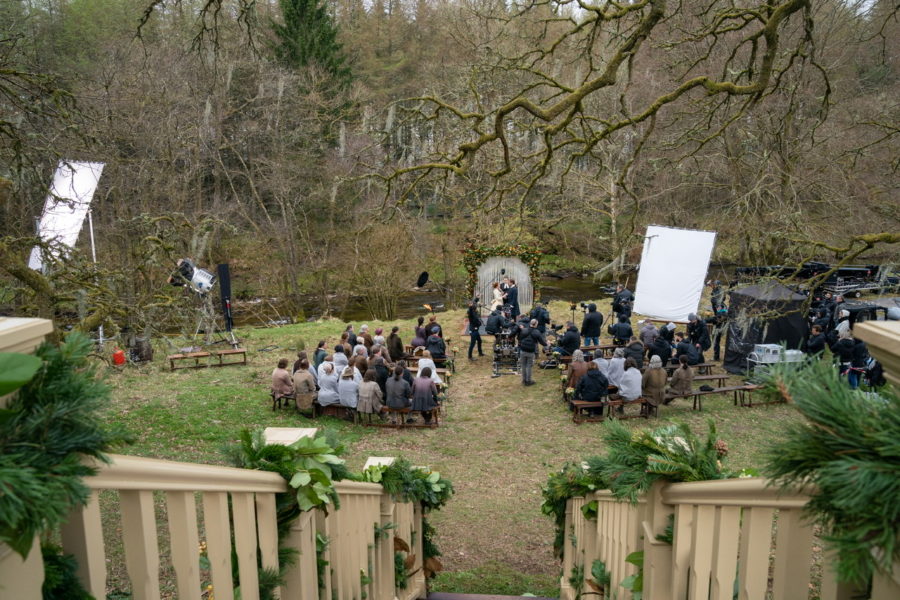 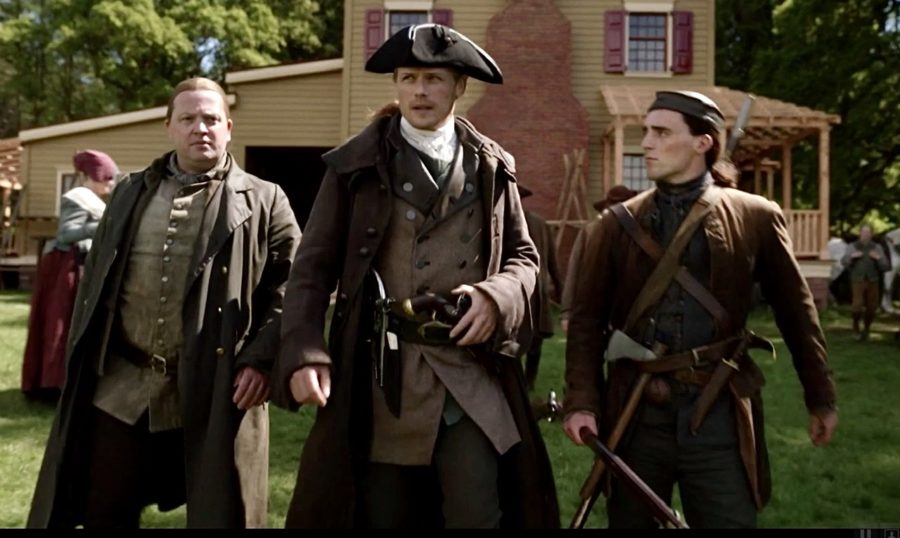 So, let’s take a wee keek at the interiors

THE KITCHEN: So far we’ve yet to see any of Mrs Bug’s culinary delights. Corn mush and possum stew anyone? Here’s hoping for a bit more action with Murdina and Arch Bug. 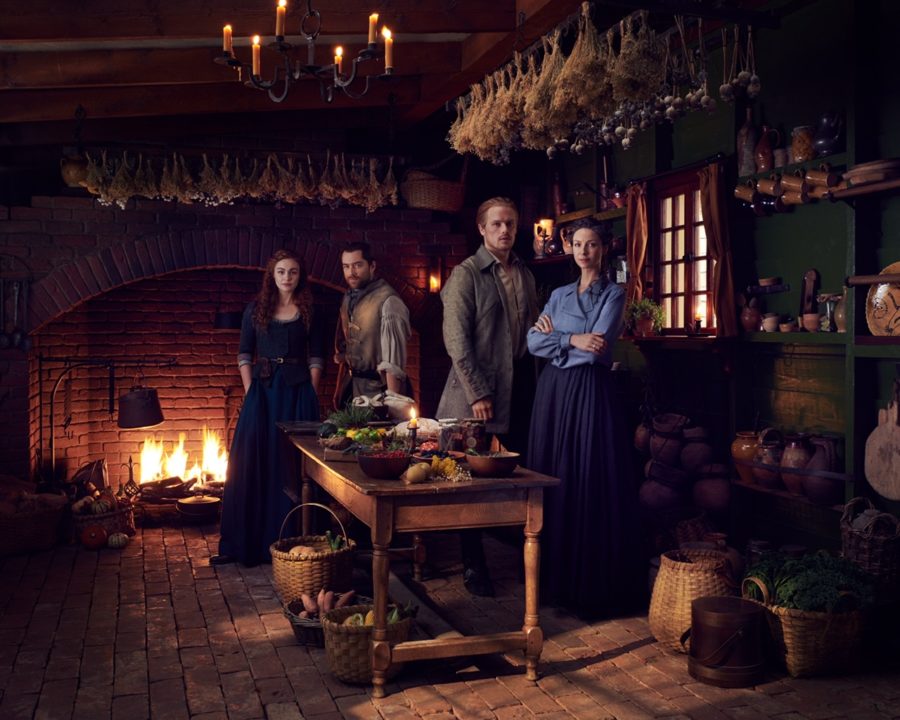 THE BREEZEWAY, or as Ashley Crawley called it in her #501 Recap,  tuberculosis alley! Where all Claire’s coughing and spluttering patients line up and wait about to be called in for attention. 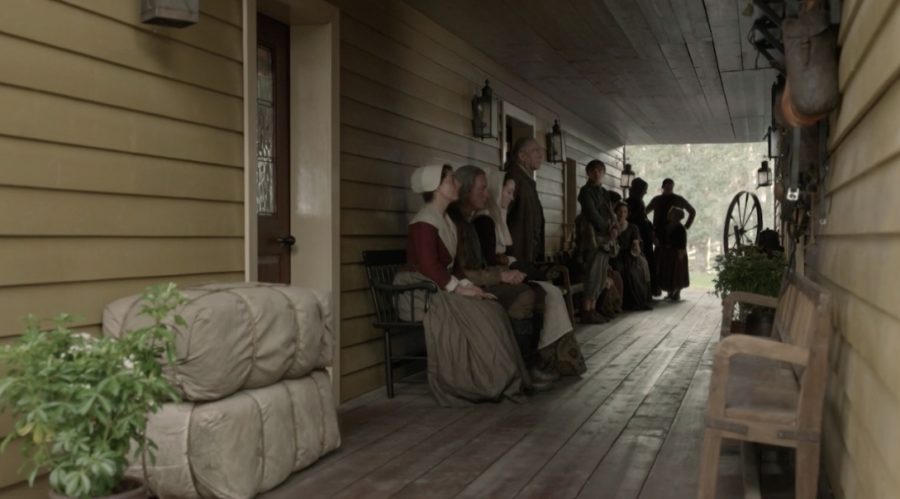 Hmmm, Lizzie meets Josiah Beardsley in the queue … and they talk about ….skin.

CLAIRE’S SURGERY What a set-up! Claire has her apothecary, hospital accommodations, operating table and mortuary slab (two for the price of one there). A far cry from having to clear the decks in a hurry at a theatre, Aunt Jocasta’s fine dining room, or the creepy cabin in the woods where Claire used her steely nerves to tend to the hideously afflicted Aaron Beardsley.

Claire now has a budding penicillin factory. This is going to come in real handy down the track. And a sassy, savvy young apprentice. Marsali is such a great character. Hope we get to see more of that witty banter that goes on between her and Jamie, as the series progresses. Marsali is already doing research, continuing experiments, learning to stitch wounds and also how to read, forbye. 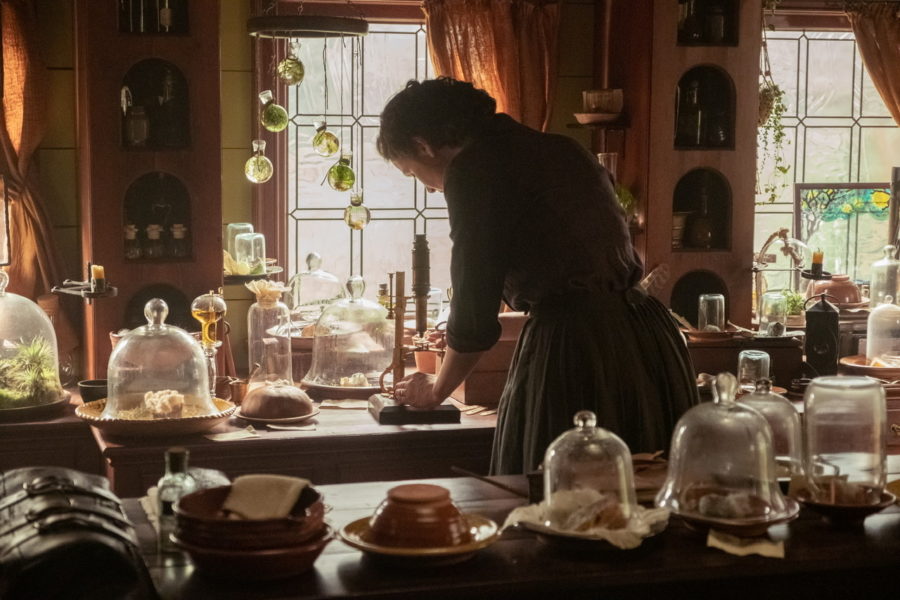 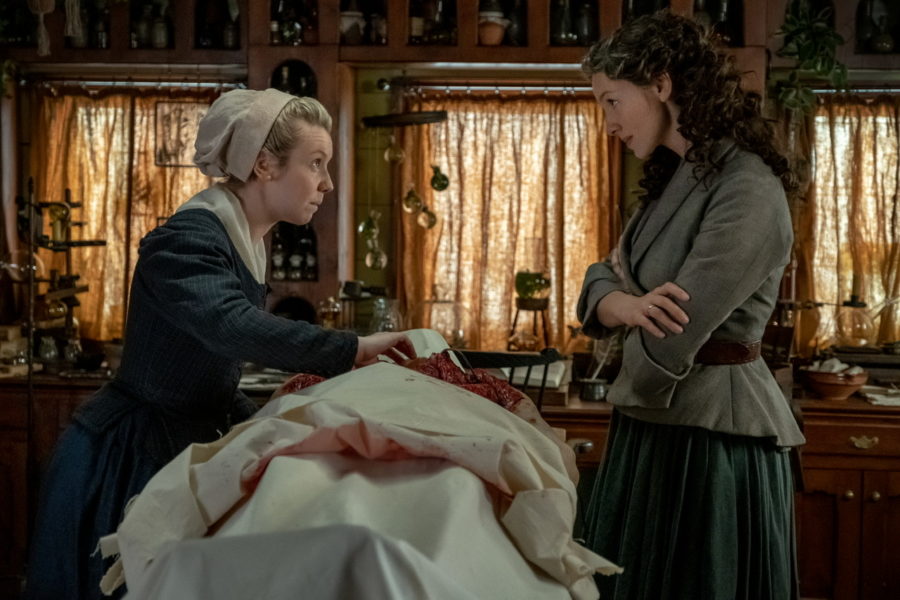 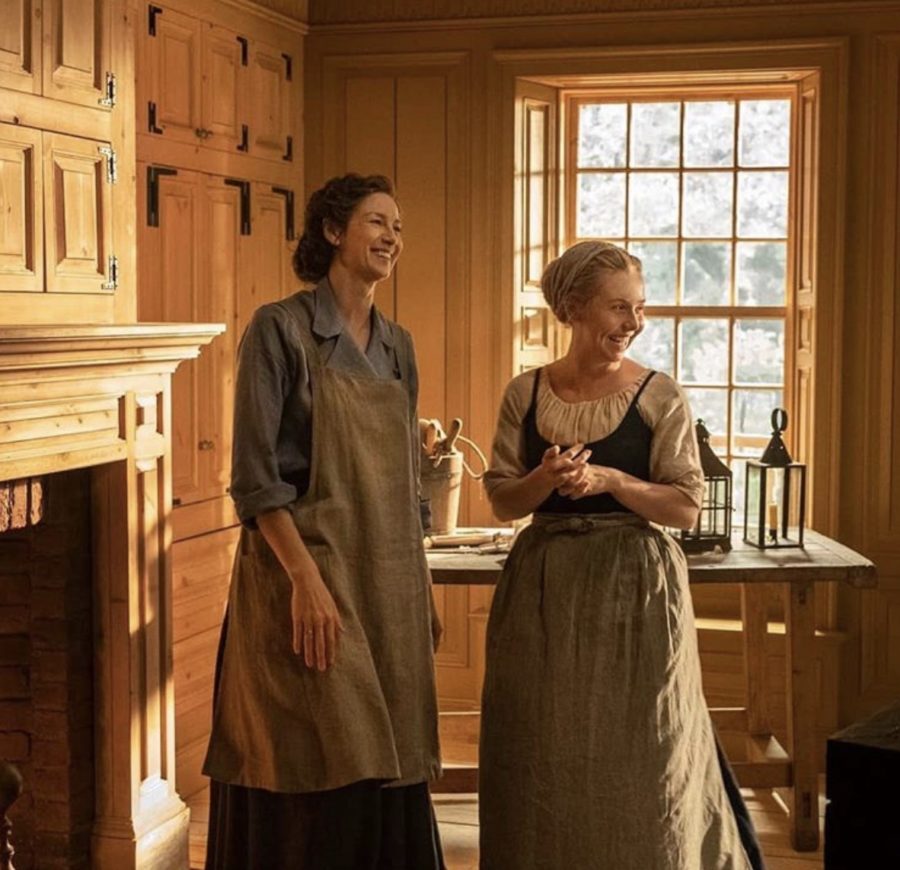 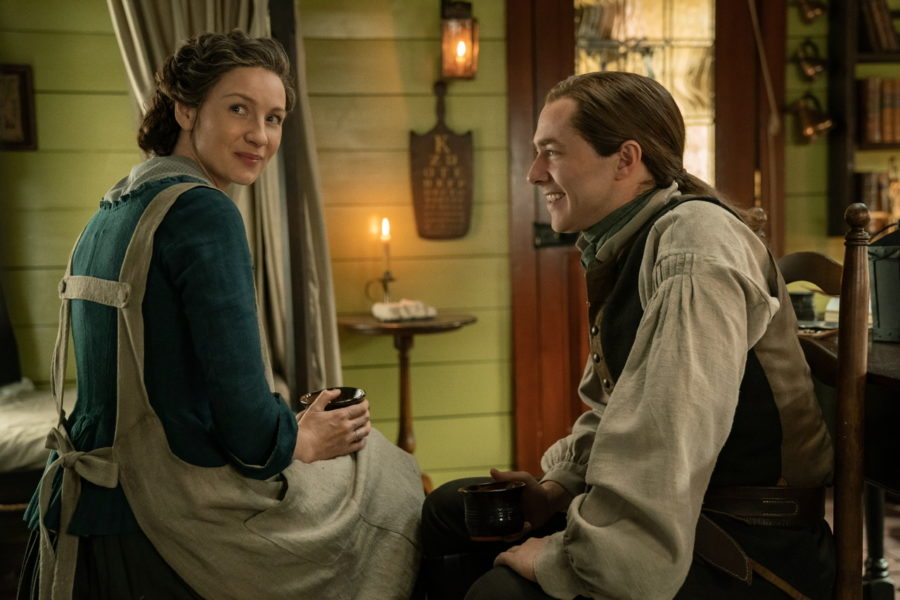 LIVING ROOM/PARLOUR Is there such a thing? We are seeing various views of the rooms but haven’t seen a comfy chair anywhere. Maybe that’s because they haven’t had time to sit down and rest yet?

JAMIE AND CLAIRE’S BEDROOM We all look forward to what goes on in this space, right? So far we have seen that wondrous Jamie and Claire combination of passion, desire and tenderness. And yes, with a measure of humour thrown in. And a lovely candle lit space for a quiet reunion after being parted. 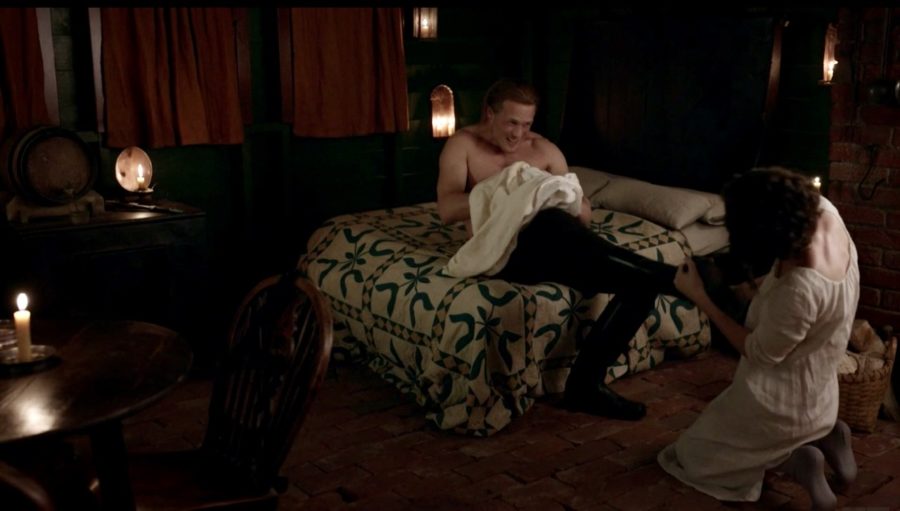 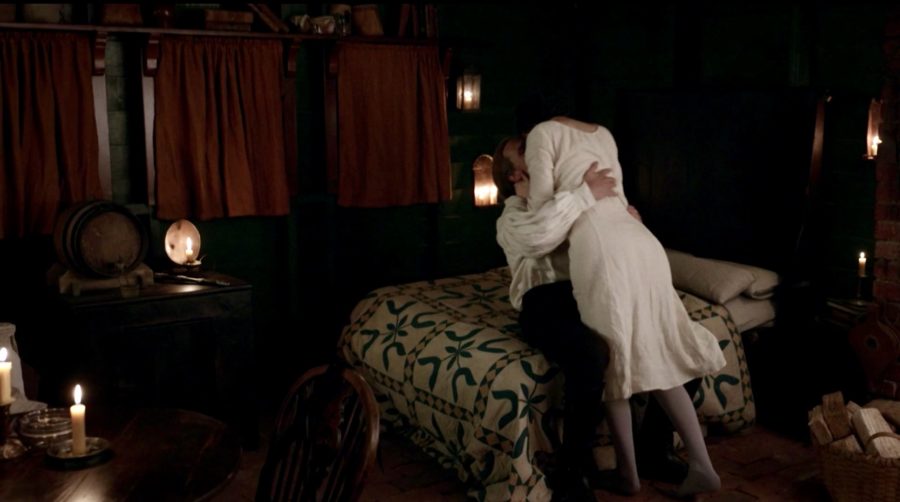 CLAIRE’S OFFICE AND/OR THE SPEAK-A-WORD ROOM  Claire has been busy writing in each episode so far and her career as a medical journalist looks set to be a feature of life on the ridge. Her Doctor Rawlings nom de plume might get her into a bit of hot water yet. Time will tell. 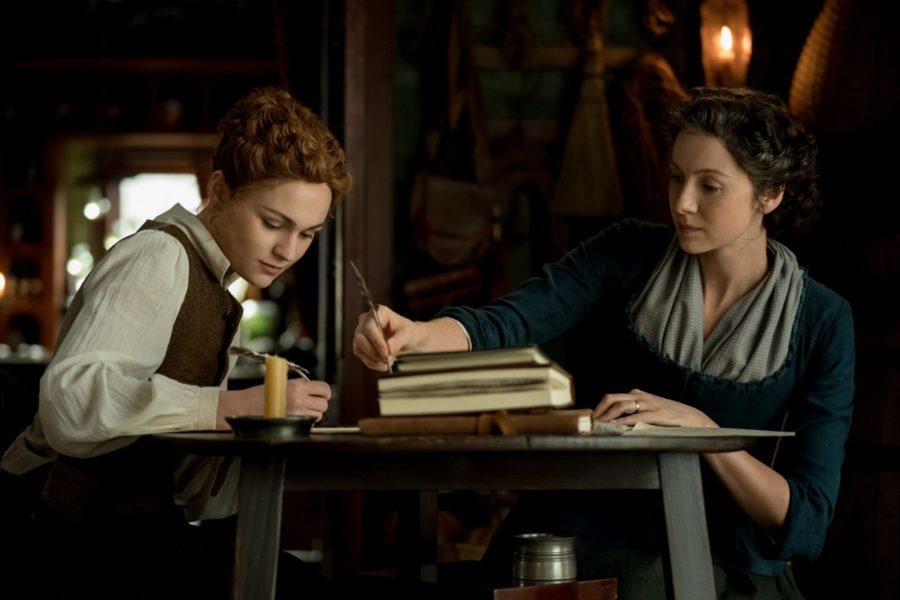 CLAIRE’S GARDEN We got a tiny glimpse of the garden when Jamie arrived back with the newest Big House inhabitant. 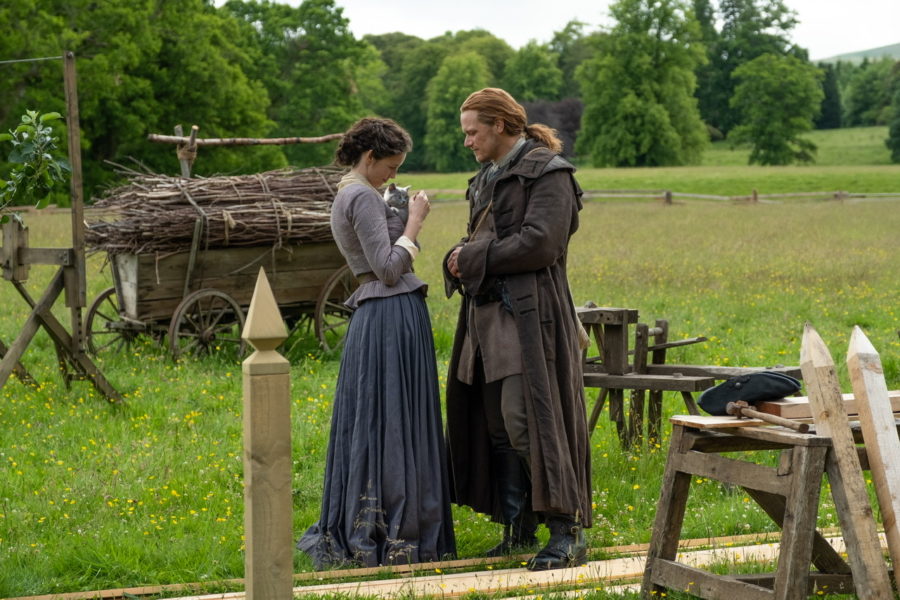 Meanwhile, behind the scenes …

In the last couple of episodes, the central action has moved away from the house and its level of cosy domesticity. We’ve seen death, battle, the horrible cliff-hanger of Roger’s fate, and had to suffer the loss of Murtagh. Even though this somehow seemed inevitable, it was still a cause for major heartache. Come to think of it, I don’t think Murtagh ever got to set foot in the Big House? If you’re suffering major Murtagh/Duncan Lacroix post-traumatic stress, don’t miss Anne Gavin’s tribute here. 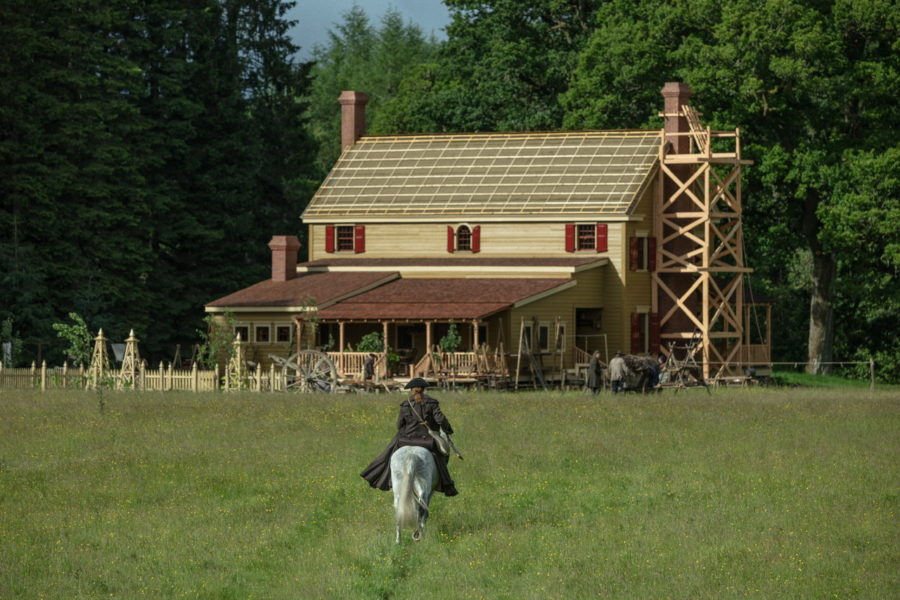 The Frasers and the Mackenzies will have a wild ride in so many locations this season, that’s for sure, but let’s hope there will be a return at some point to that beautiful house and the wonderful community and life they have created at Fraser’s Ridge.

First published at OutlanderCast on 7/4/2020