(First posted at outlandercast January 2017)
It was 8:30 am on a crisp and sunny September morning in Glasgow. And there I was, at an Outlander film shoot. I could scarcely believe that all my planning, and a fair measure of good luck, had brought me here. I’d arrived in Scotland from Australia only two weeks before, and by now I was right into the swing of it, immersed in everything Scottish and yes, I could even understand the Glasgow accent! Handling the currency was another matter, but that’s a particular problem of mine.

I reflected back on my first two weeks, spent in the northern parts of Scotland. I had walked the Scottish Highlands, experiencing those landscapes that had me enthralled. I’d spent a week at the Findhorn Foundation, and visited the Outer Hebrides. At Findhorn, I spent a very engaging and open-minded week with people from all over the world – many of whom it turned out, shared my Outlander passions. But my northern Outlander experience wouldn’t be complete without a visit to a real live circle of standing stones, now would it? And by week three, I was ready for the real launch of my Outlandish adventures…

Through my twitter linkages, Facebook and Instagram radar, I’d been tracking all things Outlander since my arrival. I’d seen an advert for extras on the Outlander set and applied. I was almost the right age and almost the right size, so that was a good sign, right? It wouldn’t really matter if the shoes were a little weeny bit tight, would it? Sign me up! But, after much to-ing and fro-ing with the agency, it turned out that I was not the right person …. boo hoo … my first disappointment.

I’d seen on Facebook that Outlander was filming at Glasgow University, and also on a street in Glasgow’s west end. Driving down from the north, I was intent on checking out both those places before dark. I was on a mission… first stop, Glasgow University. I had never in my life been to Glasgow, but Siri was guiding me so what could go wrong? Right?!

Well, first I turned in to a park, which apparently was for foot traffic only. People were yelling and running after me – that was a dead giveaway! These helpful pedestrians, relieved that I hadn’t run them down, set me on the right path.

Just a tad frazzled now, I searched the university grounds looking for the place I’d seen on Facebook, and there it was. I approached a woman getting in to her car and asked if she knew of the Outlander filming. She said the filming seemed to be over now that the students were back. I was on the track but – oh no! – that track was a dead end. So, still hopeful, I set off for the west end.

My good friend, Siri, did her best, and even found me a nearby parking spot. There were signs everywhere telling people the street would be closed for filming tomorrow – eureka! I was in the right place at last! Back at my Airbnb, I planned the next day with military precision – very early rise, backpack, food, water, phone/camera, portable charger, all-weather gear, umbrella, first aid kit (kidding!). Basically, I was prepared for all contingencies. Je suis prêst.
The next morning, I found myself back on that street to find it already humming by 8:30 am. Gary Steele (our idol of production design) was directing people on changes to make in the street and was taking photographs – don’t we just love the photographs he puts up on Instagram? His teasers of the sets and the exceptional architecture, interiors and fine details that inspire him – all eye candy for us! Later on, we heard from a person who lived on the street that all the curtains in the houses had been changed so that no ‘modern’ curtains could be glimpsed in the scenes. Talk about attention to detail.

I asked a security guy if it was okay to be a spectator, and he waved me across the street towards a woman saying, “go ask her.” It turned out that she was another spectator and she laughed that she had been mistaken for one of the crew. (Fun side note: that was Sabrina, and we made a connection that day and went on to have fun travels and more Outlandish escapades together). I did, however, eventually ask a crew member and they said it was okay as long as we didn’t get in the way of the filming. Cue some verra big smiles on our faces then!

It was soon evident that we were looking at a street in Boston in the late 1940s, Claire and Frank’s home – goose bumps. New street lamp fittings, fire hydrant, painted lines on the streets removed, new street signs – Furey St, right? And on and on, it was fascinating to watch those preparations. All the details and all the people involved. The side streets were lined with trucks filled with props and equipment. Bicycles, prams, pot plants, you name it. 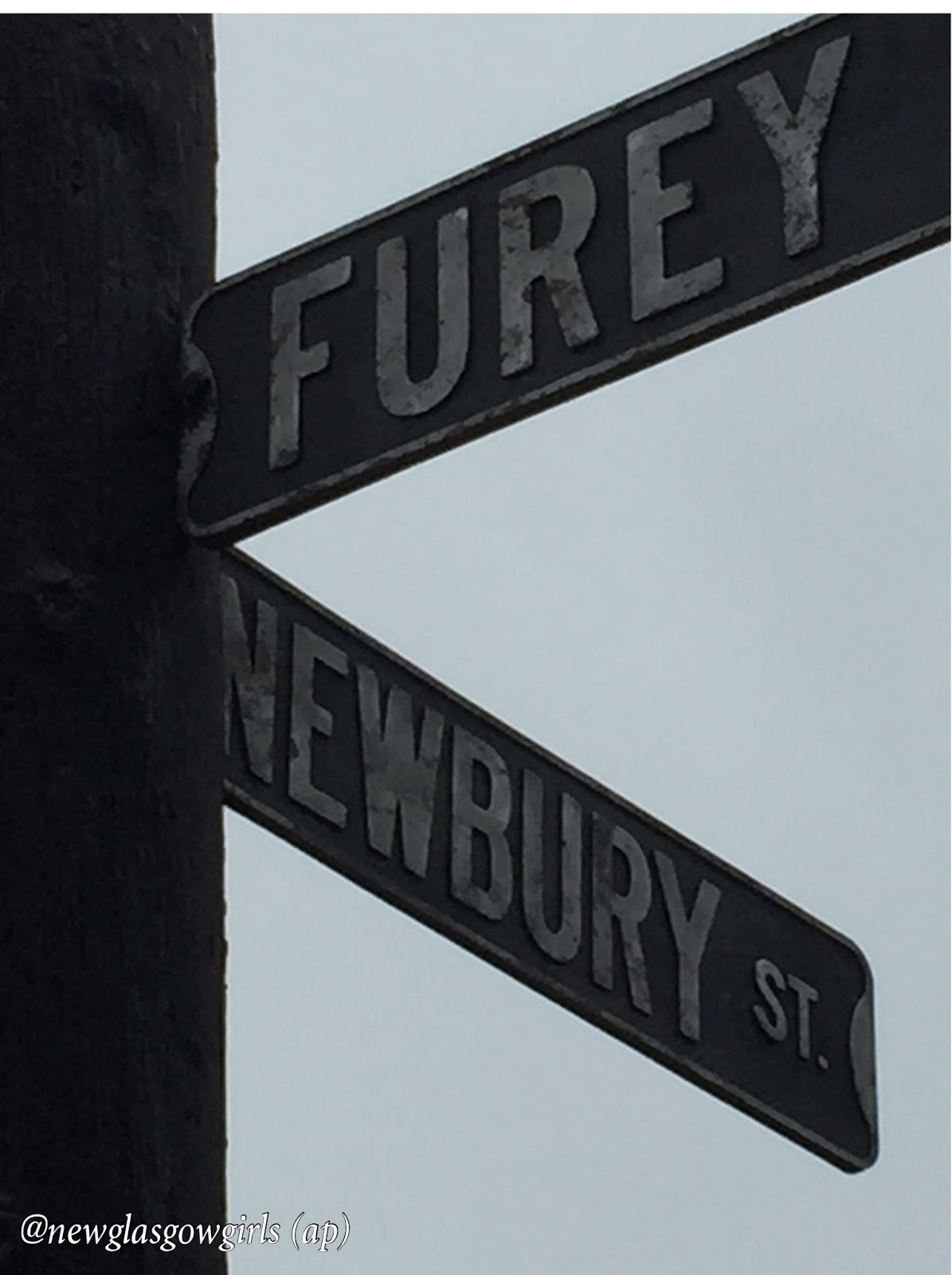 During all this early action, we chatted with Gary and then with Davie Stewart, Sam Heughan’s very friendly driver. They even posed for pictures with us. Davie is also well known for his photography (yep, Instagram) of all the phases and moods of the moon and beautiful landscapes. Everyone was asking him about his camera, but that was all way above my pay grade, me being a humble iPhone photographer and all. There was a good, friendly vibe, and we were hyped.

By now, there were three of us standing together – me, Sabrina and Naomi. Little did I know at that point what a strong connection I would make with those two. There seemed to be a lull in proceedings, so we decided on a coffee break, and, a girl’s gotta pee, right? We were excited and we were definitely there for the duration. As long as it took.

Preparations continued throughout the entire morning – setting up the street, and getting everything just right. By this stage, a larger group had assembled and we met up with Ren, Dora and Morag. There was such a good feeling of Outlander fan camaraderie. We took advice from the security gal as to when the filming would commence. She said they were at lunch so we decided it was that time for us too, and we headed off for food, coffee, phone charging and wifi. We really got chatting then and found out that we were from all over the world. Australia, Germany, England, China and Malaysia – what a mix, and all die hard Outlander fans who had tracked this event down in much the same way I had!

When we returned, the street had been cordoned off, ready for action. We spotted a couple of other Outlander identities… none other than Matt Roberts, writer and producer extraordinaire. Swoon for his wonderful photographs too, eh? His remarkable black and white studies of people, landscapes, buildings and Outlander behind the scenes – all Instagram heaven. And also on the scene was Outlander language coach Carol Ann Crawford. Remember her cameo chatting with Roger, in “Dragonfly in Amber,” at the Reverend Wakefield’s wake? 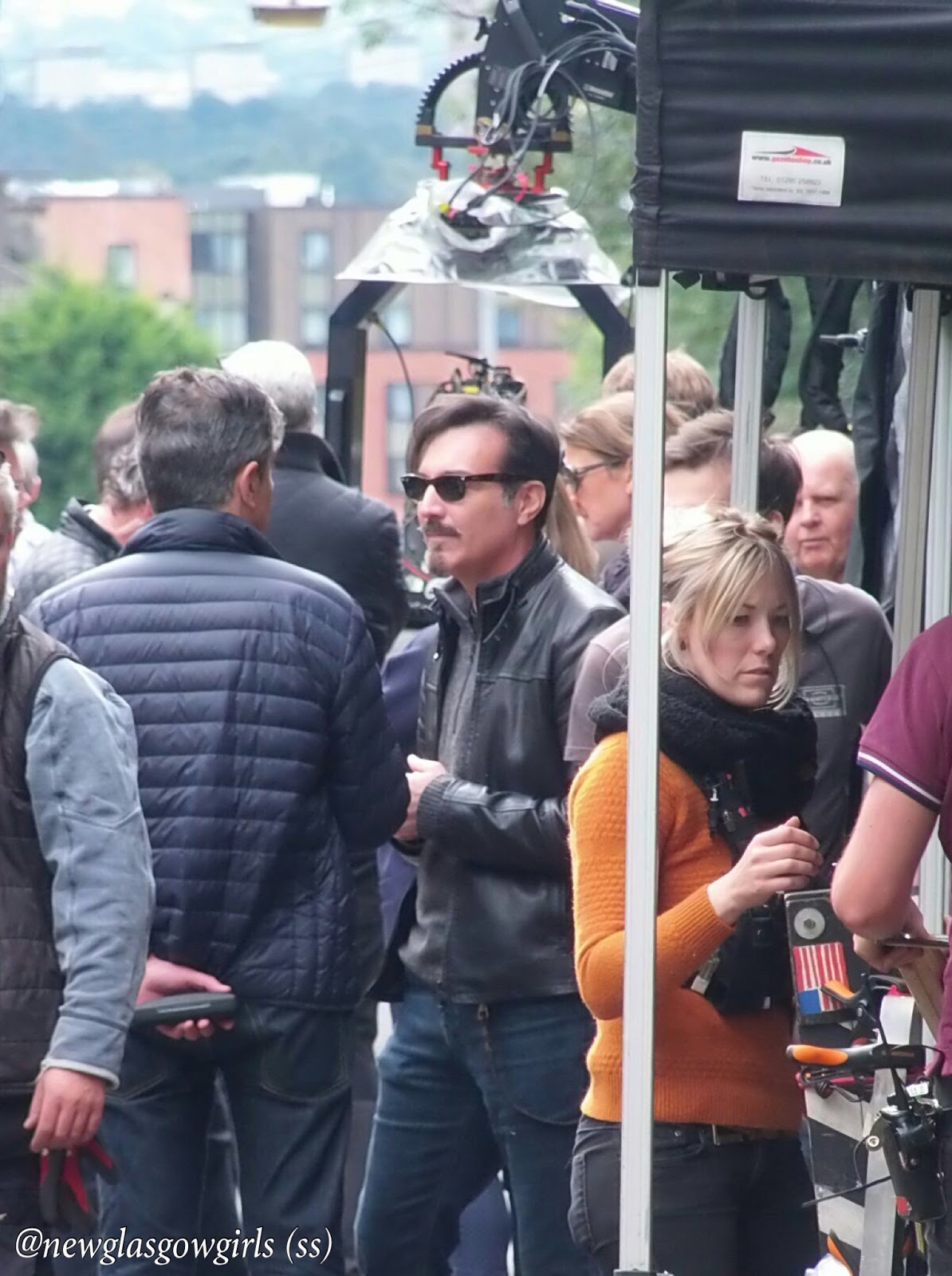 The extras started to assemble in their gorgeous 1940s outfits and hairstyles. They were being primped and instructed and were practicing their moves, up and down the street. Then the cars started to arrive. Amazing 1940s cars in pristine condition were driven into the street. It really was beginning to feel like we had gone back in time. 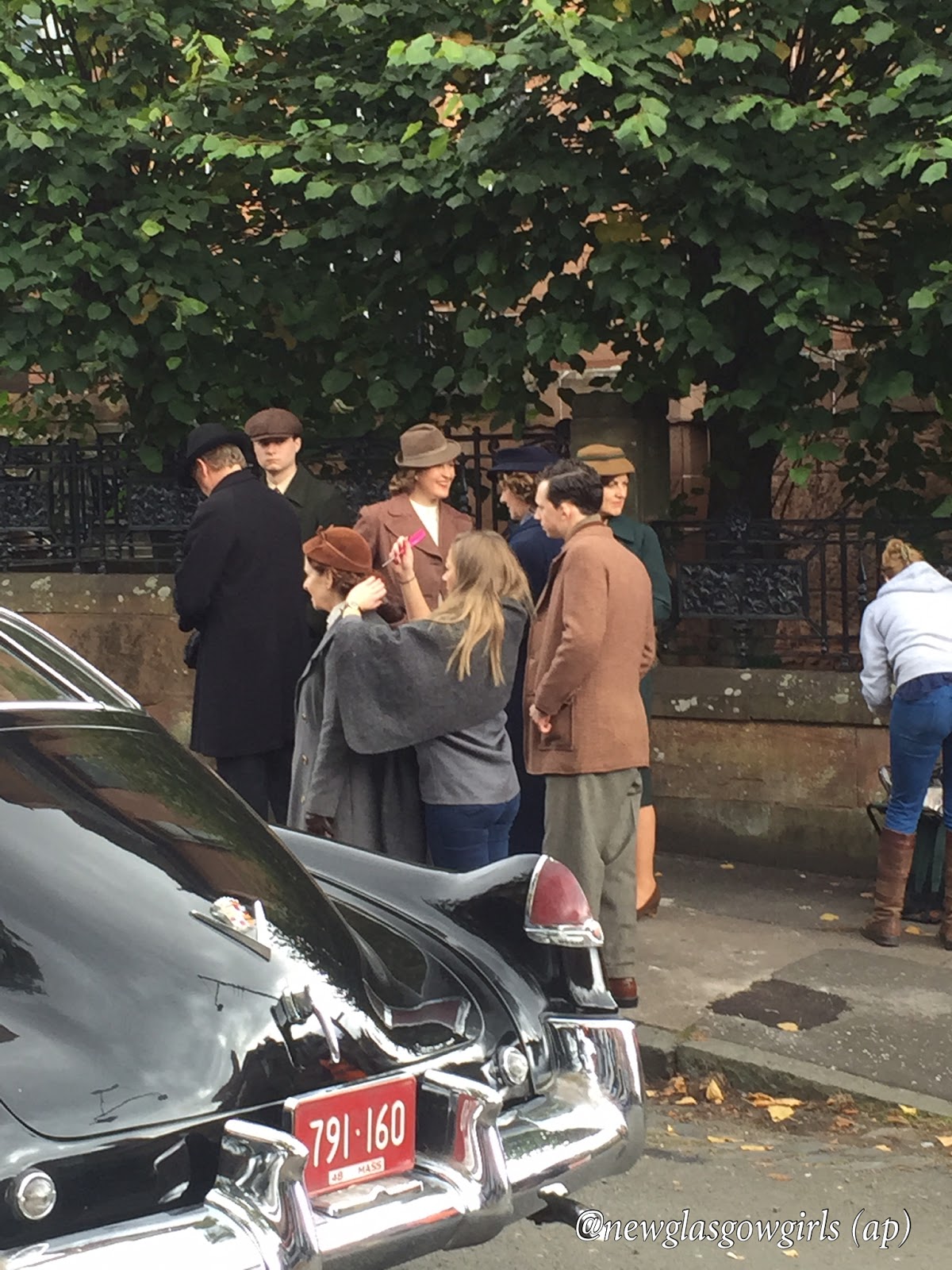 When Caitriona Balfe pulled up with her driver, Andy, there were squeals of delight from the assembled throng, about 20 strong by now. She waved and kept on going to her work, and we did hope that we might get up a little closer and more personal later in the day.

Over the next several hours, we became aware of the grind that is part of the acting process. Caitriona had to repeatedly walk the length of the street, get into one of the cars and drive back… it was filmed over and over, to get it just as the director wanted. There were also scenes with Caitriona and another actress at the front of the house filmed over and over, seeking perfection. 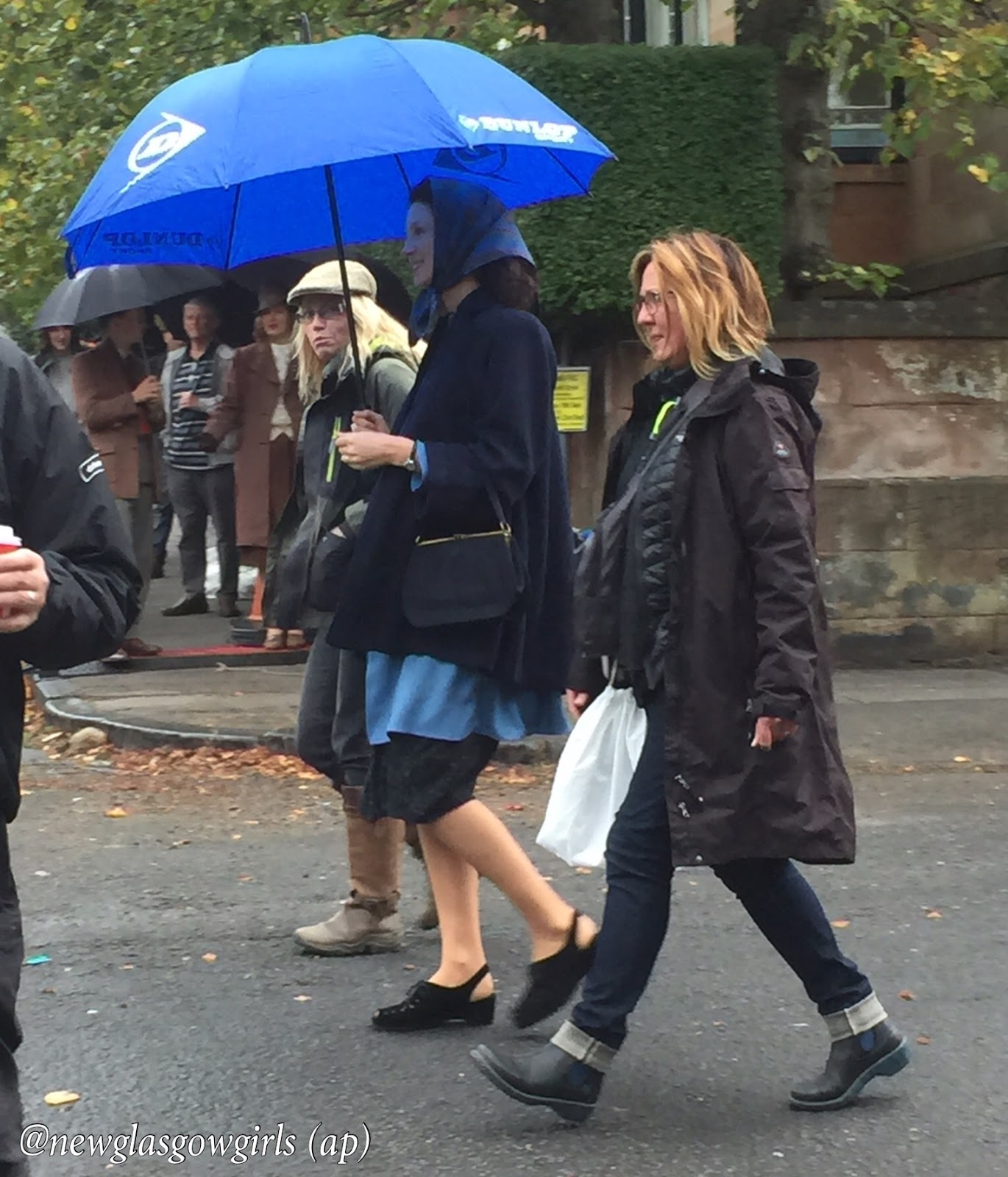 The weather had started to crack up a bit (no problem for me with my over-the-top Girl Guide preparations), but our spirits brightened when Caitriona walked up the street and started to chat with fans. She was lovely and good-humored (just as you would imagine) and happy to sign autographs and pose for fan pics. Oh, lucky day! Yours truly was in the wrong place at that moment (disappointment number two). “Oh well, there may be another day,” she (ahem, me) said hopefully.

There was a buzz when Tobias Menzies arrived in his dapper 1940s outfit. 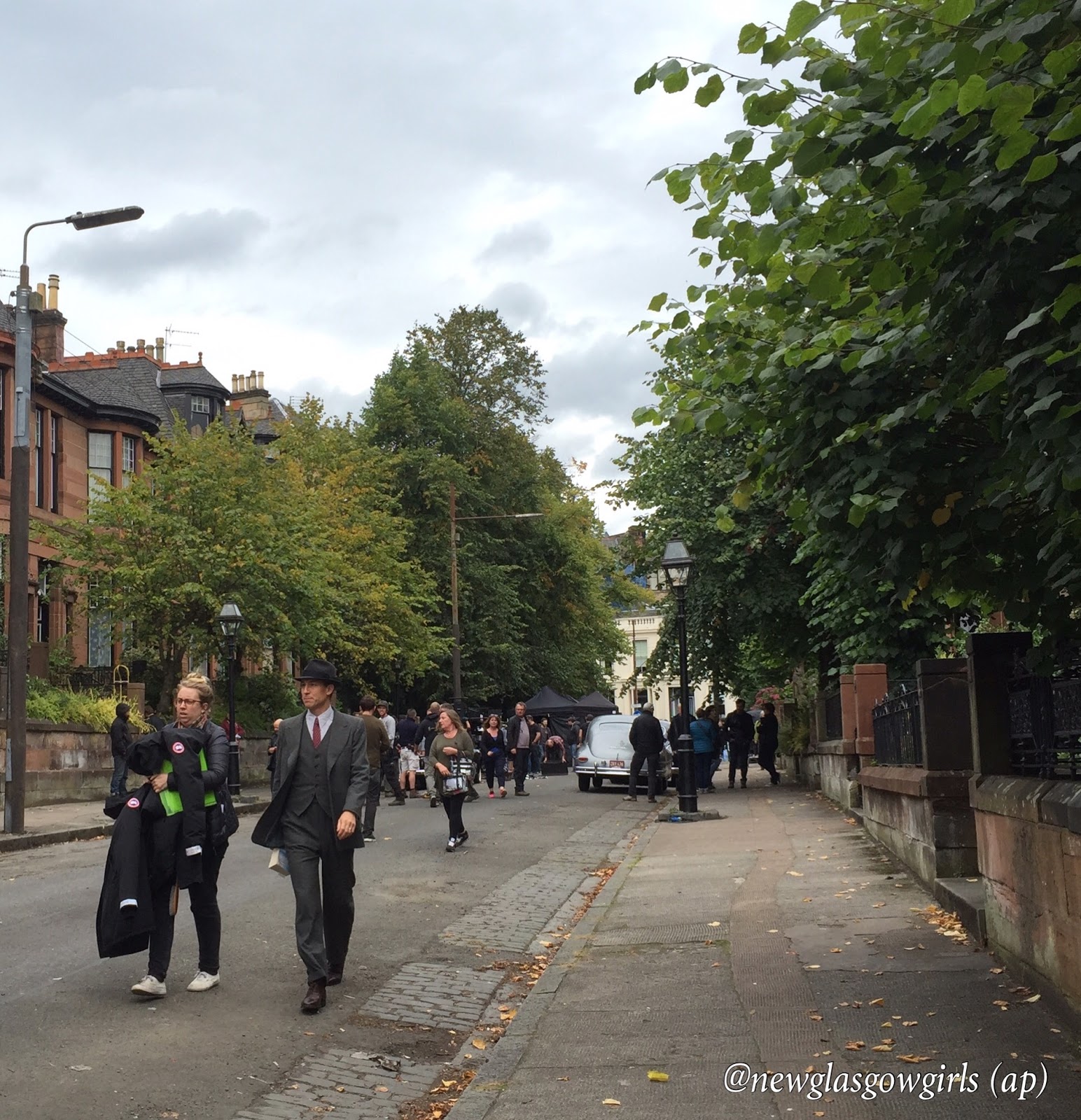 As afternoon rolled in to evening, the crew went in to a whole new phase of action. Huge lights were brought into play, the street lamps were lit and the streetscape was changed, with bags of autumn leaves strewn around. Again, a small scene at the front of the house was filmed repeatedly getting things just right. 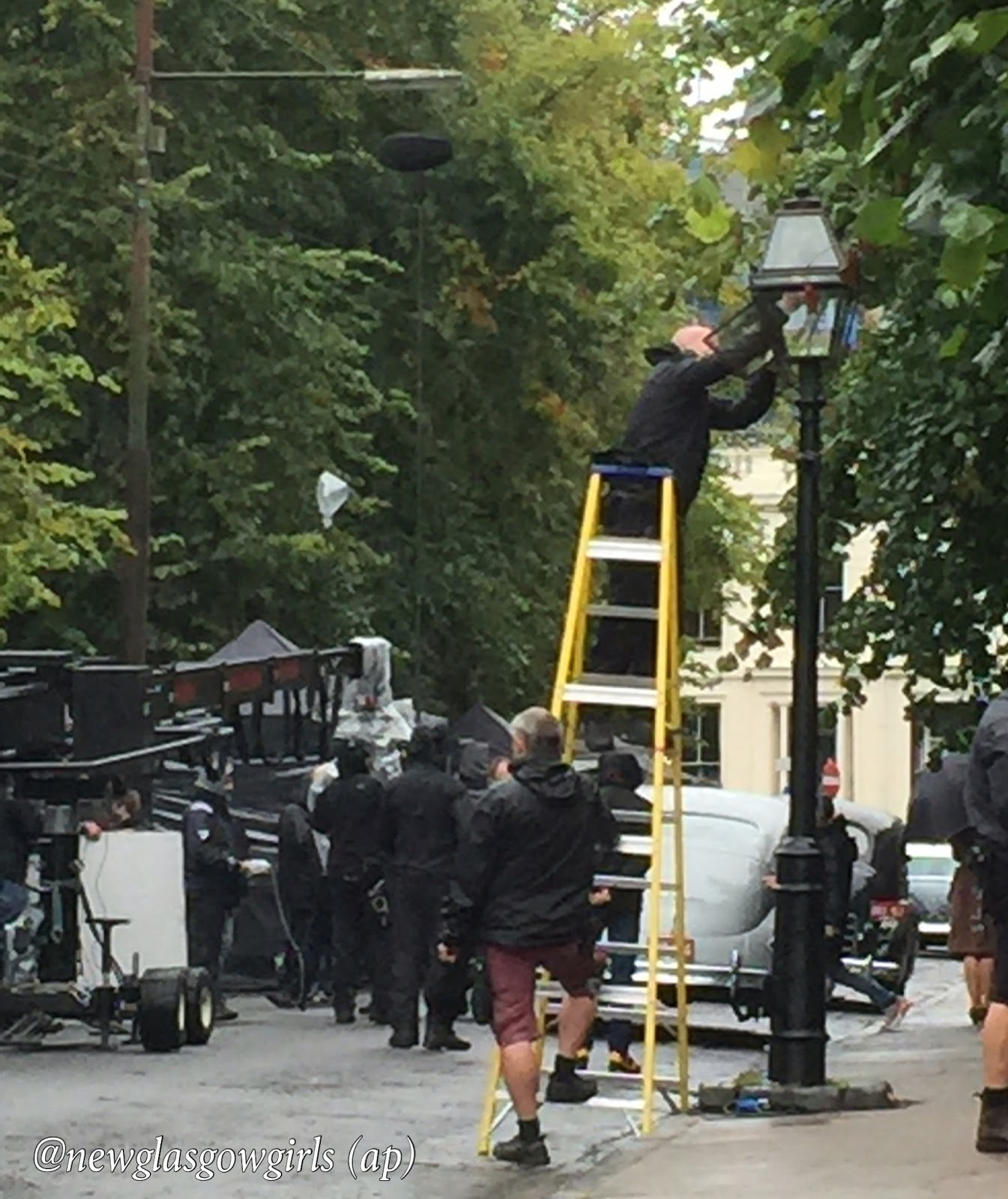 One thing which amazed me that day was the number of people involved and the time it took to film what may be a very short snippet on the show, or what may even end up on the cutting room floor. We hope not, though, because we REALLY want to see the scenes that we saw being filmed!

As night fell, we were tired, slightly damp and pretty cold, and we awarded ourselves medals for our stamina. We started to drift away one by one, saying our goodbyes and our ‘let’s keep in touches’. And we did, we became the newglasgowgirls. It had been a verra good day – one that I hope we have the opportunity to repeat another day in the not-too-distant future!

Have any of you had up close and personal experiences with the filming of Outlander or other TV shows? Would love to hear about that in the discussion below! Outlander Retrospective – Behind the Scenes in Episode 408, ‘Wilmington’