(First posted at outlandercast March 2018)
As usual, it was an international effort to bring you our latest Chasing Outlander post! An American mastermind (Outlander Cast writer Anne Gavin) arranged a meeting between a Scottish photographer, Gary Dempster, and an Australian writer, yours truly. So read on to see our latest adventures in the world of Outlander.

We knew that filming of waterfront scenes was to take place at the beautiful seaside town of Dunure on the Ayrshire coast, southwest of Glasgow. We weren’t sure of the day and the weather forecast was decidedly dodgy but we were up for it. So the planning began.

Being an Ayrshire local, Gary did a great reccy before the filming started at a time when the set was open. His pictures here show you the amazing attention to detail that we have come to expect from Jon Gary Steele and his design team. We’re right there on the dock in the 1700s. 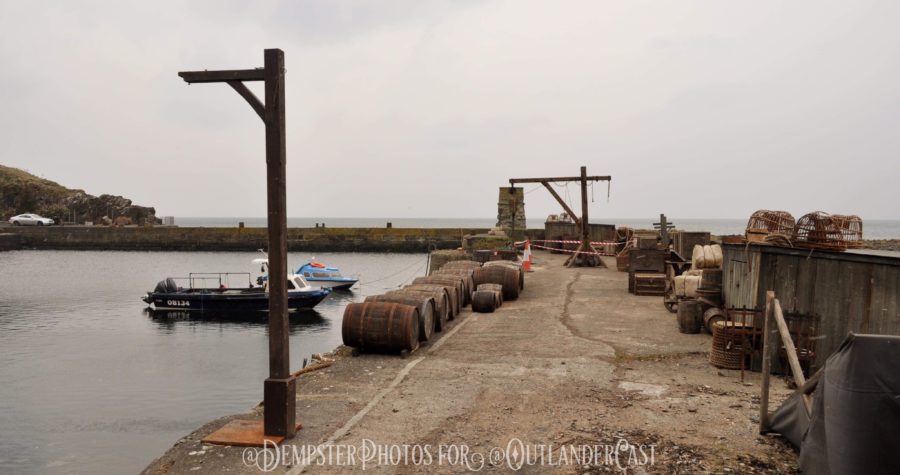 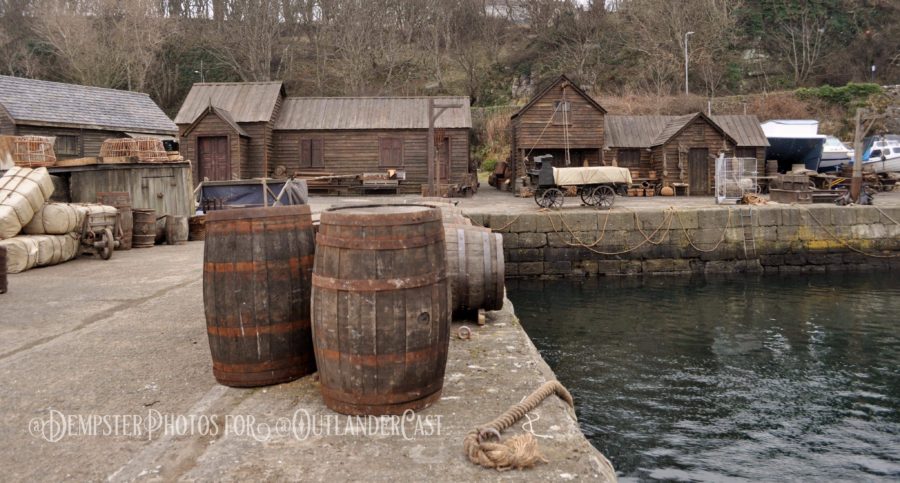 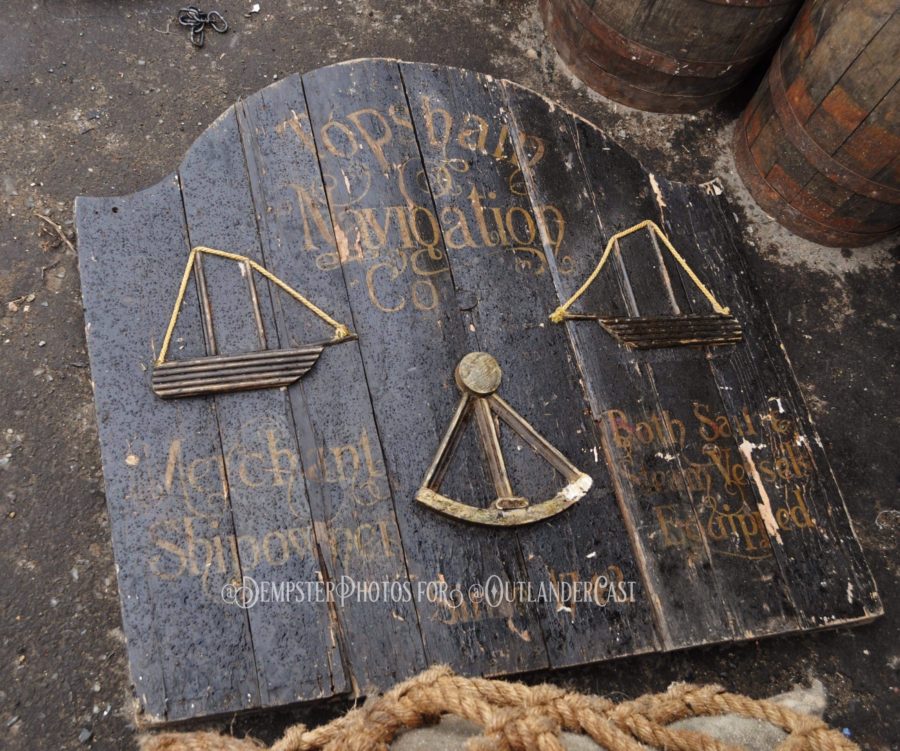 On filming day, I got up at 5.30 a.m. to catch the bus to Ayrshire to meet Gary. That trip took a wee bit longer than expected, ice, snow, ambulances and trapped vehicles notwithstanding. When I finally got to Ayr, two hours later than expected, there was not a hint of snow and the skies were clearish. That’s Scottish weather for you — wild and unpredictable. 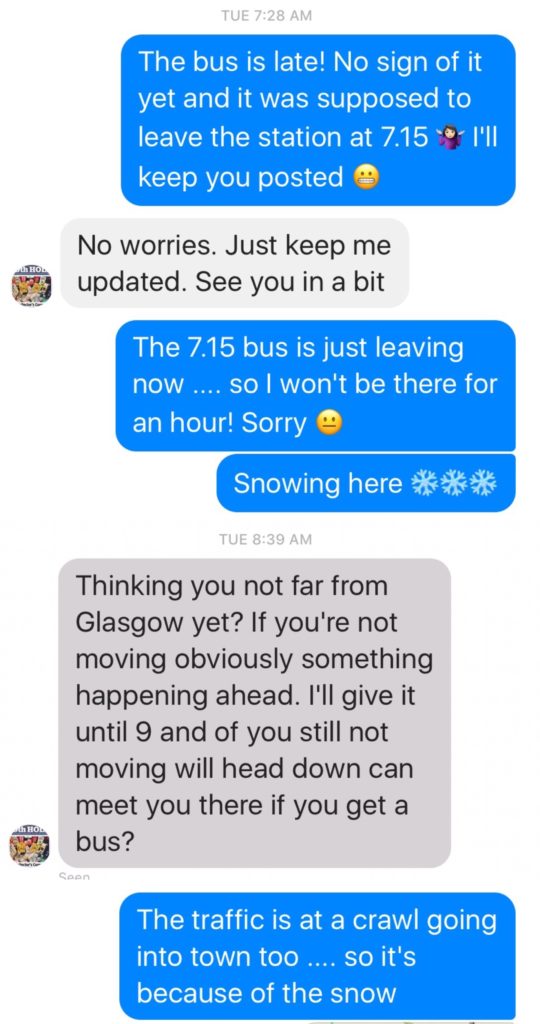 You’ll remember Dunure Harbour from scenes in Season 3 when Claire and Jamie were saying farewell to Jared before setting sail for Jamaica. And just up the road is the ruined Dunure Castle, where Jamie searched for Claire and found the treasure after escaping from Ardsmuir prison. It’s fair to say that Dunure locals are used to seeing Outlanderfilm crews in town.

When we arrived, we found a really good and clear vantage point to watch the day’s action unfold. It was amazing to see that little harbor turning into an authentic 18thcentury scene, with so many extras in costume. Another huge nod to Terry Dresbach and her team for transporting us into that world. The first thing that strikes you about the clothing of the crowd is the colours. So different from today’s clothing in colour and texture. The muted tones (they didn’t have our brightly coloured dyes, of course, except for the Red Coats — ahem) and all the natural and coarsely woven fabrics. 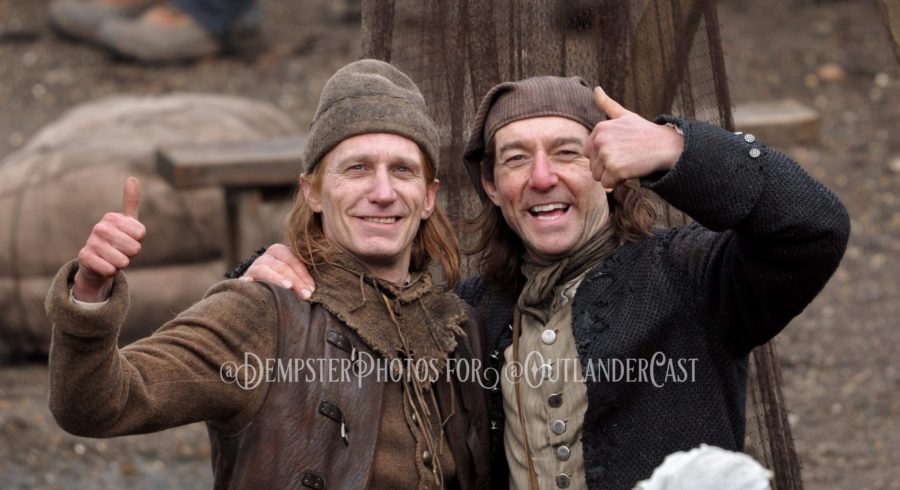 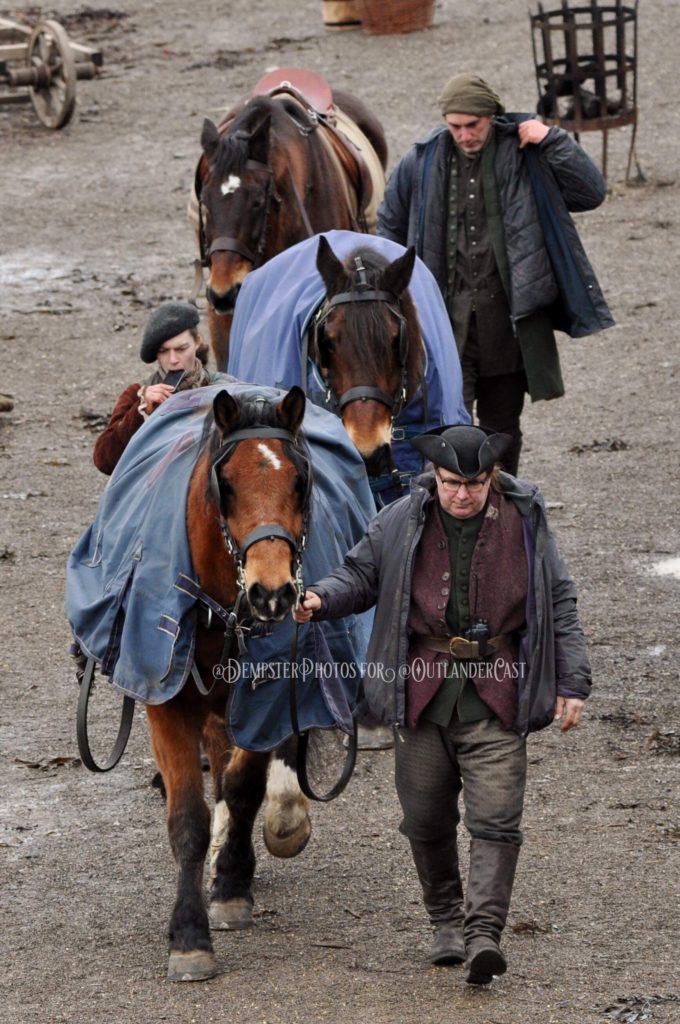 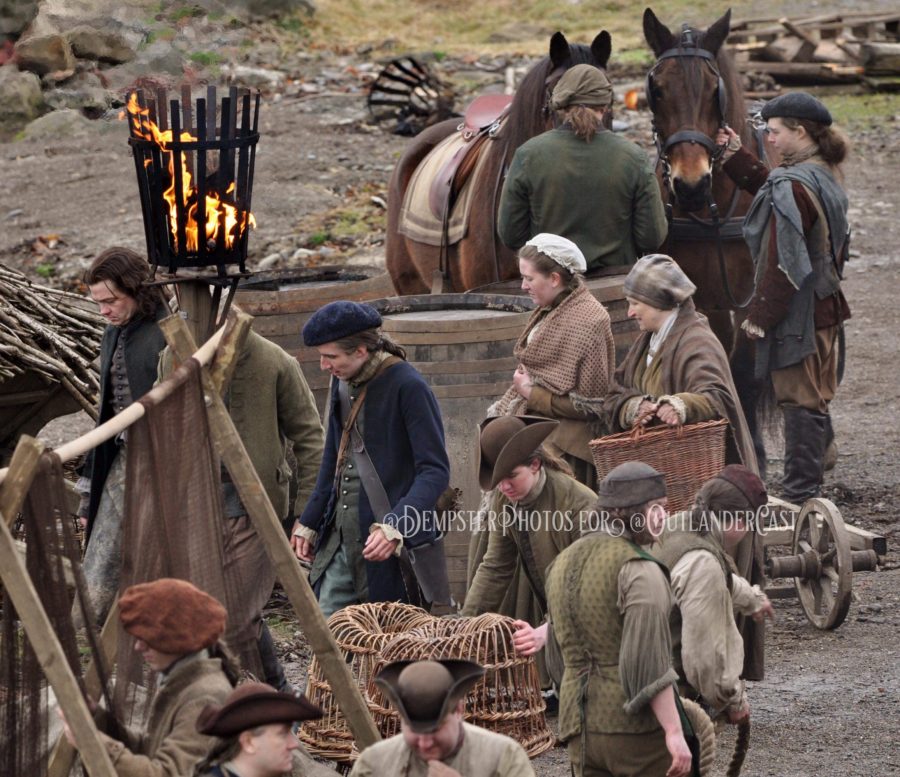 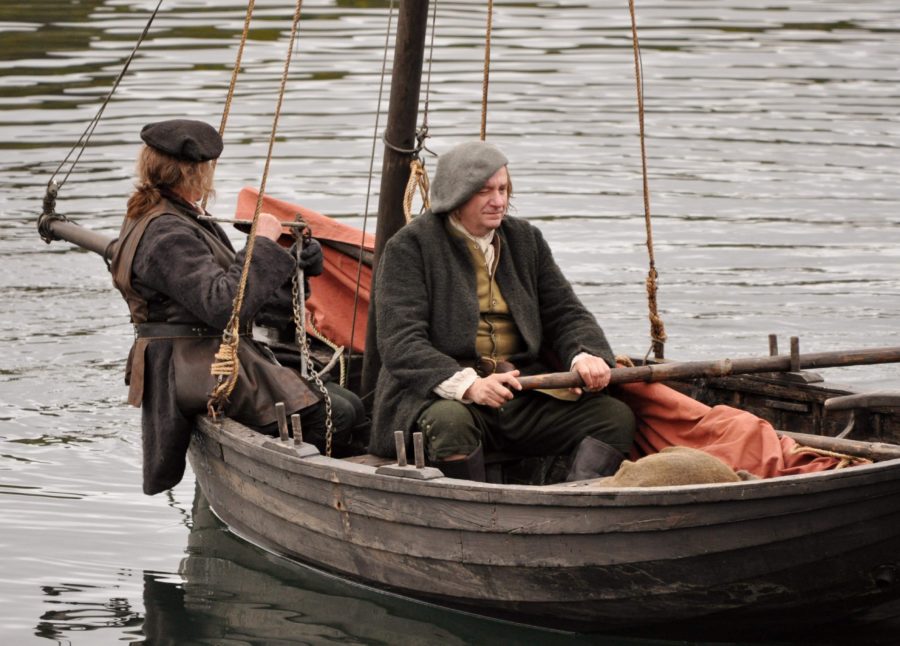 Sophie Skelton was first on set, and played a scene where Bree walks along the wharf with a young woman. Could it be Lizzie Weymss? Your guess is as good as ours. 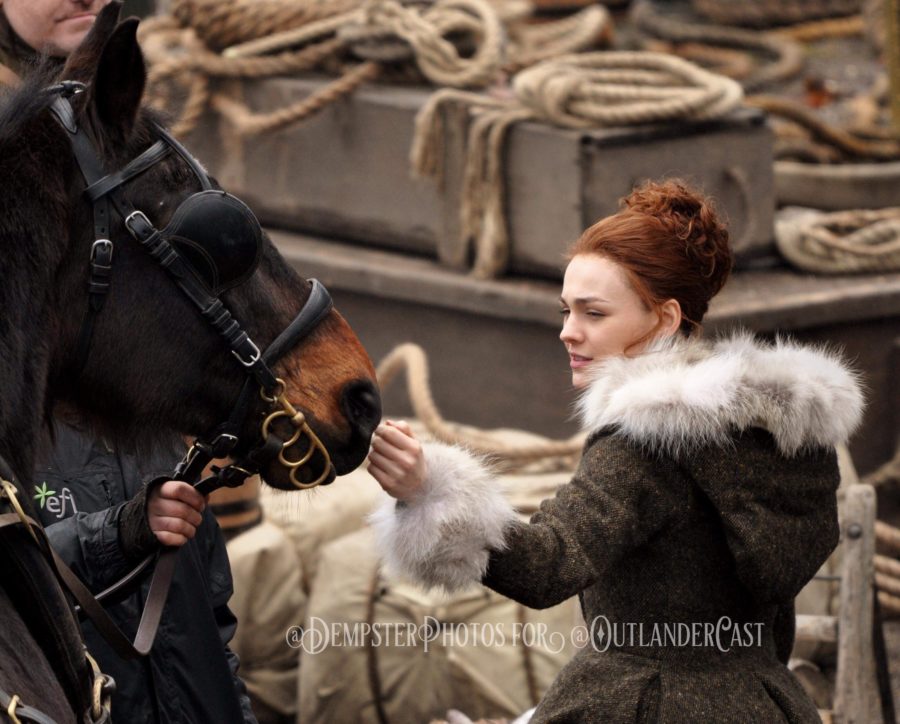 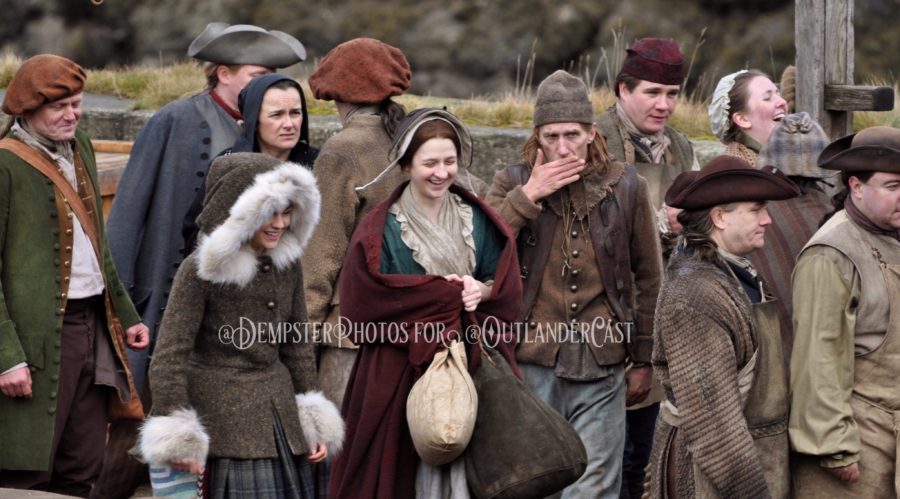 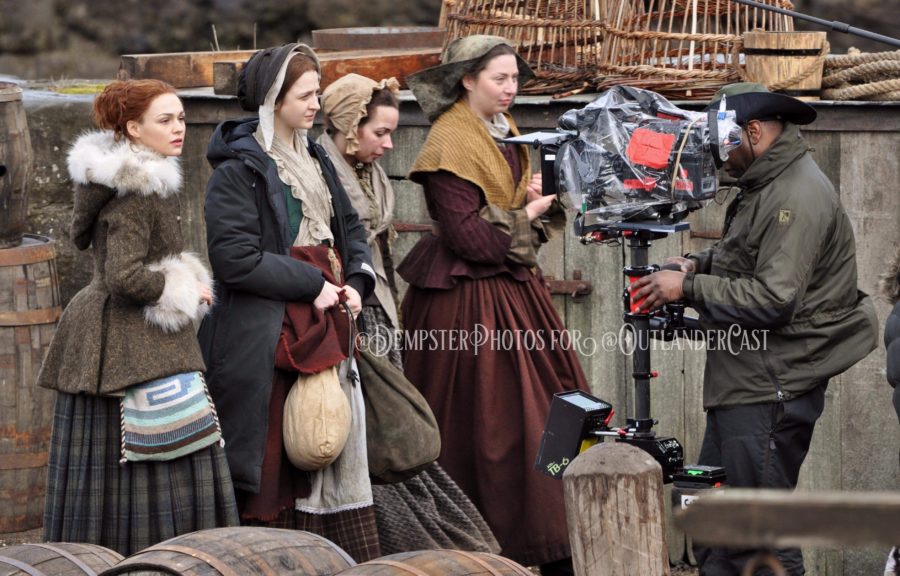 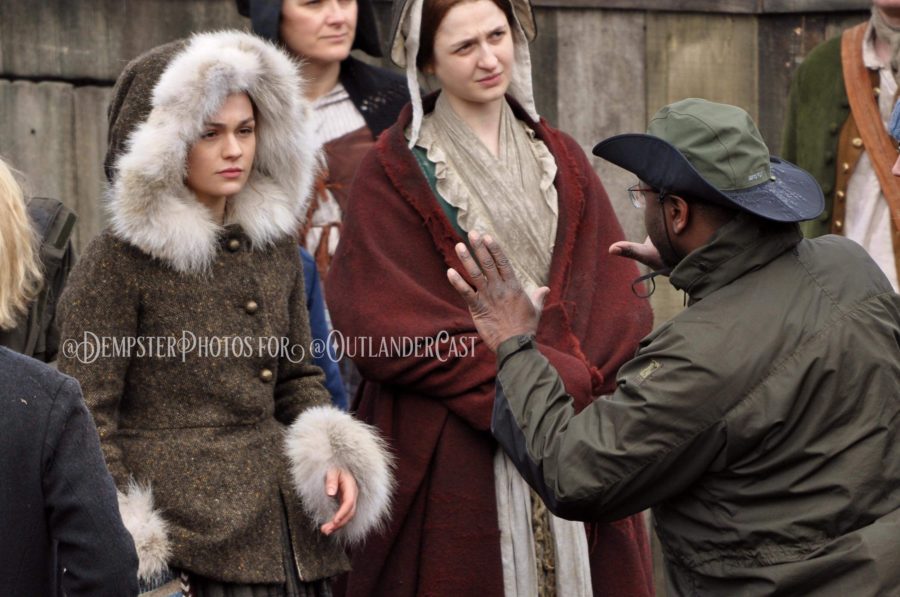 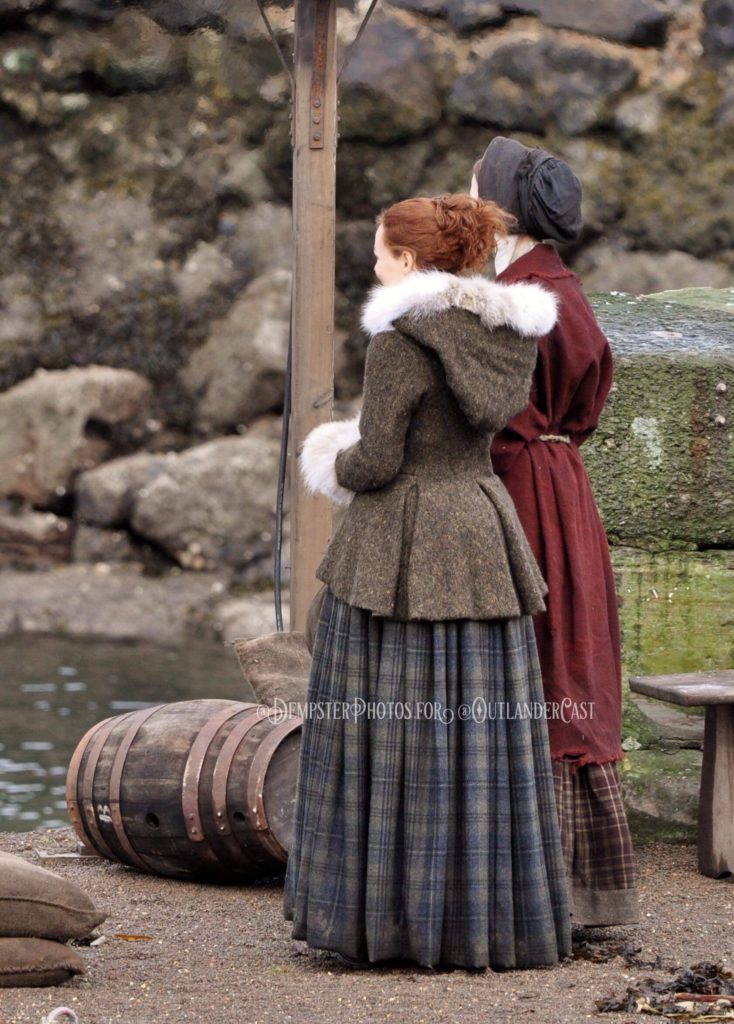 There were so many extras on set all playing their roles of busy people working or passing by on the water front. Also, the occasional Red Coat here and there patrolling the dock and generally maintaining law and order. We got used to calls of “stand by!” …. “rolling!”… “background action!” (for the extras) … then “action!” (for the principal actors). 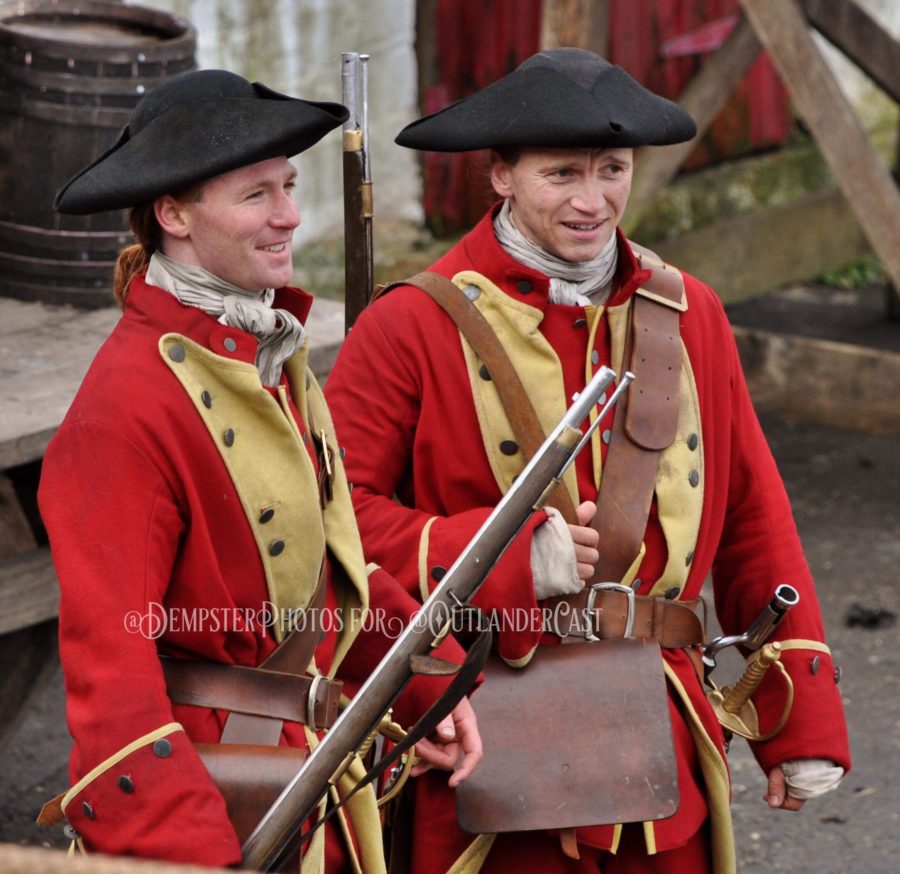 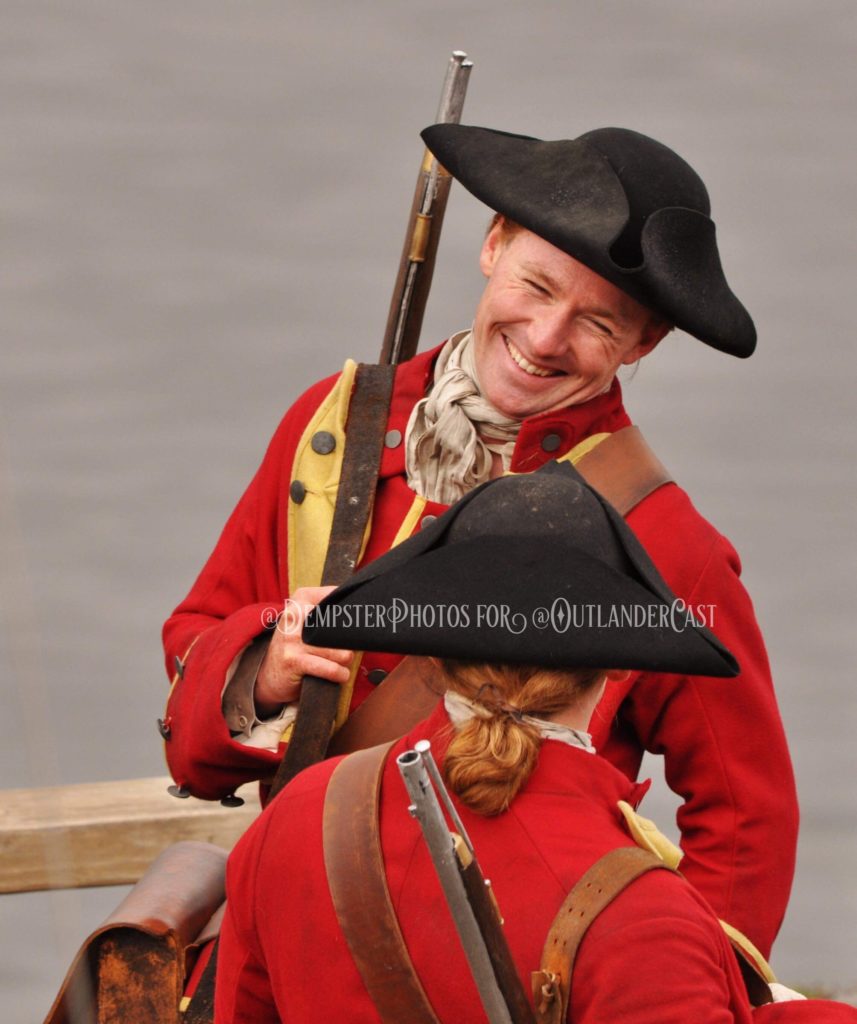 We spied something VERY interesting during this scene. A well known (and well-loved and well-hated) character turned up on the set. This would be a HUGE SPOILER so we’re going to save it for when this episode airs! Watch this space then and you will see some brilliant and exclusive behind-the-scenes pictures. Our lips are sealed just now. Bet you can’t wait!?

Next Steven Cree arrived on set with his “green screen“ leg. A horse was brought in and attached to a small wagon. The scene was set for Ian Murray to assist Brianna climbing out of the wagon and walking along together talking. 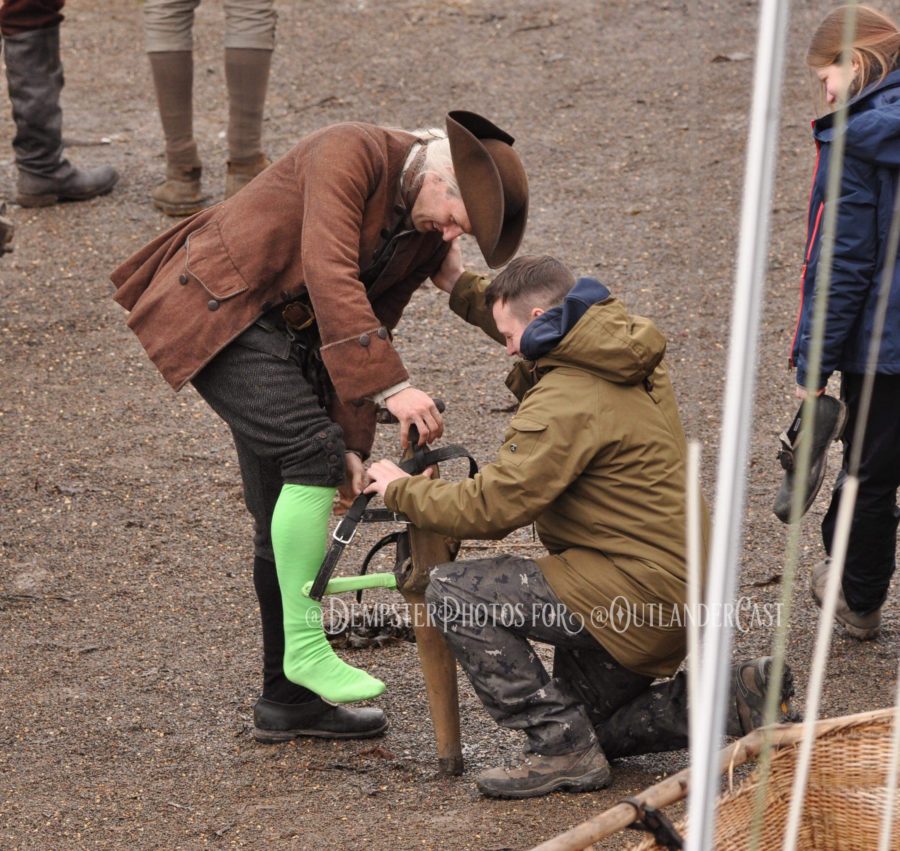 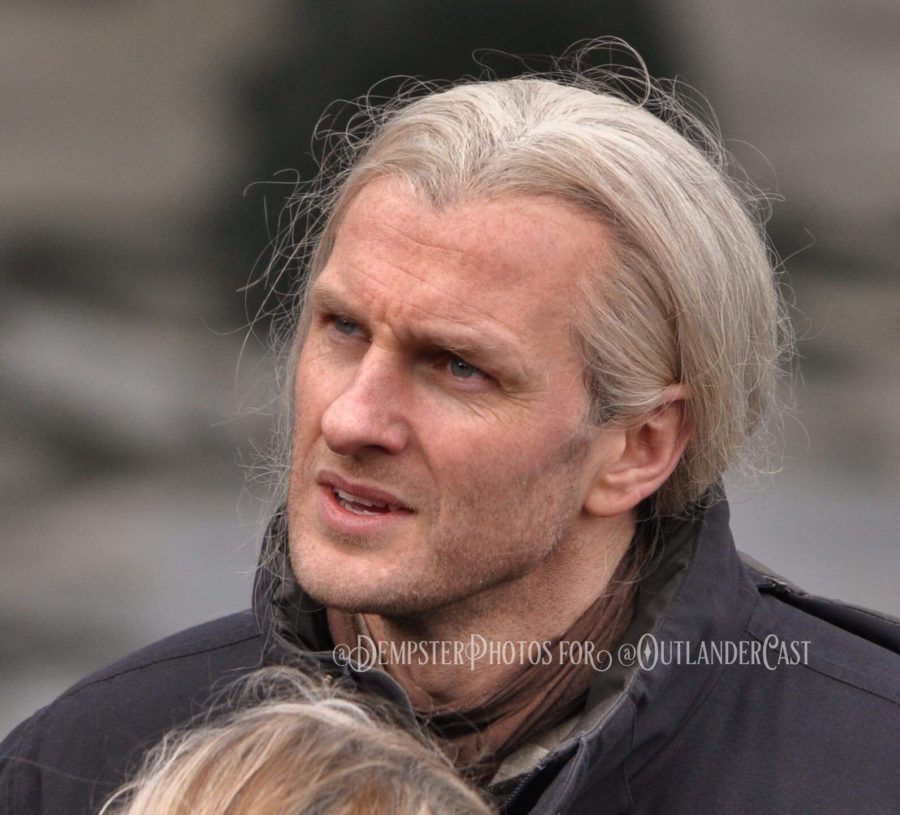 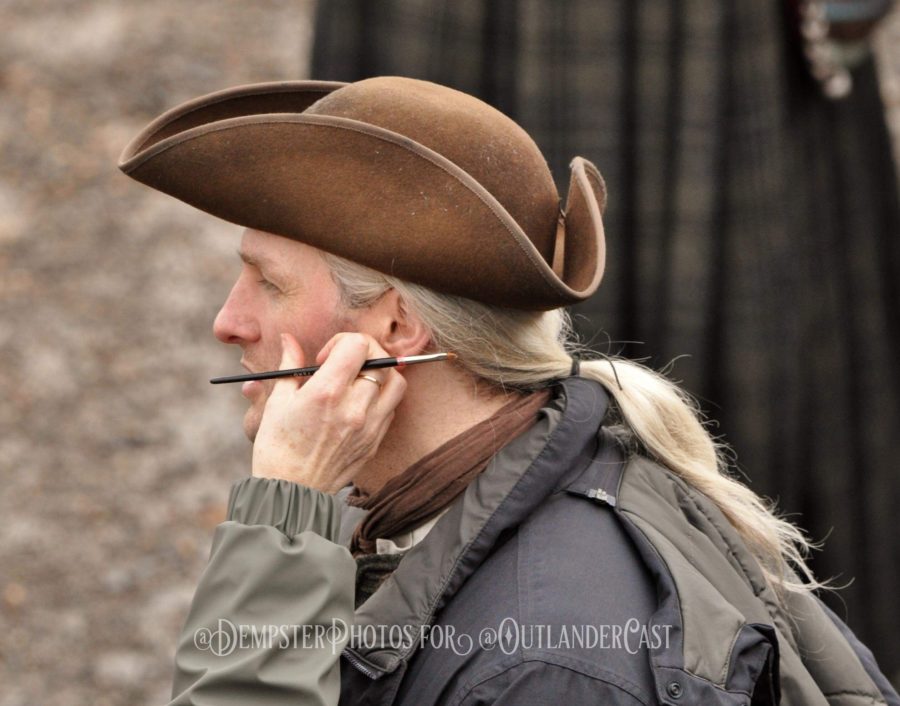 As usual, the scene was shot many times, from two different long-shot angles and then close up. 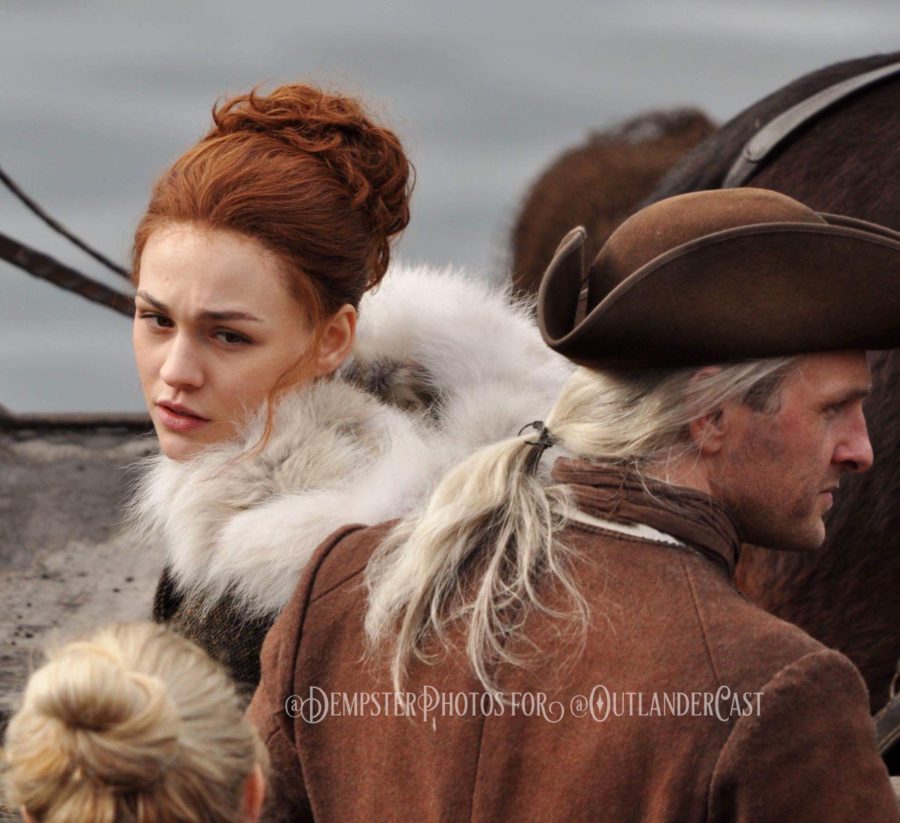 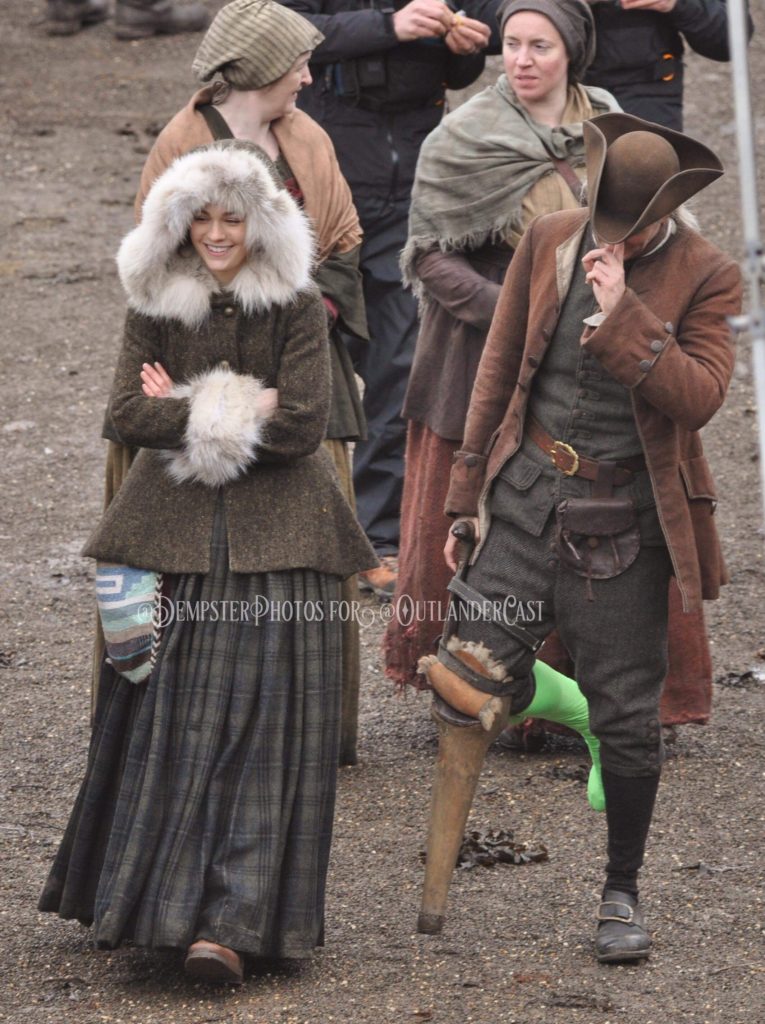 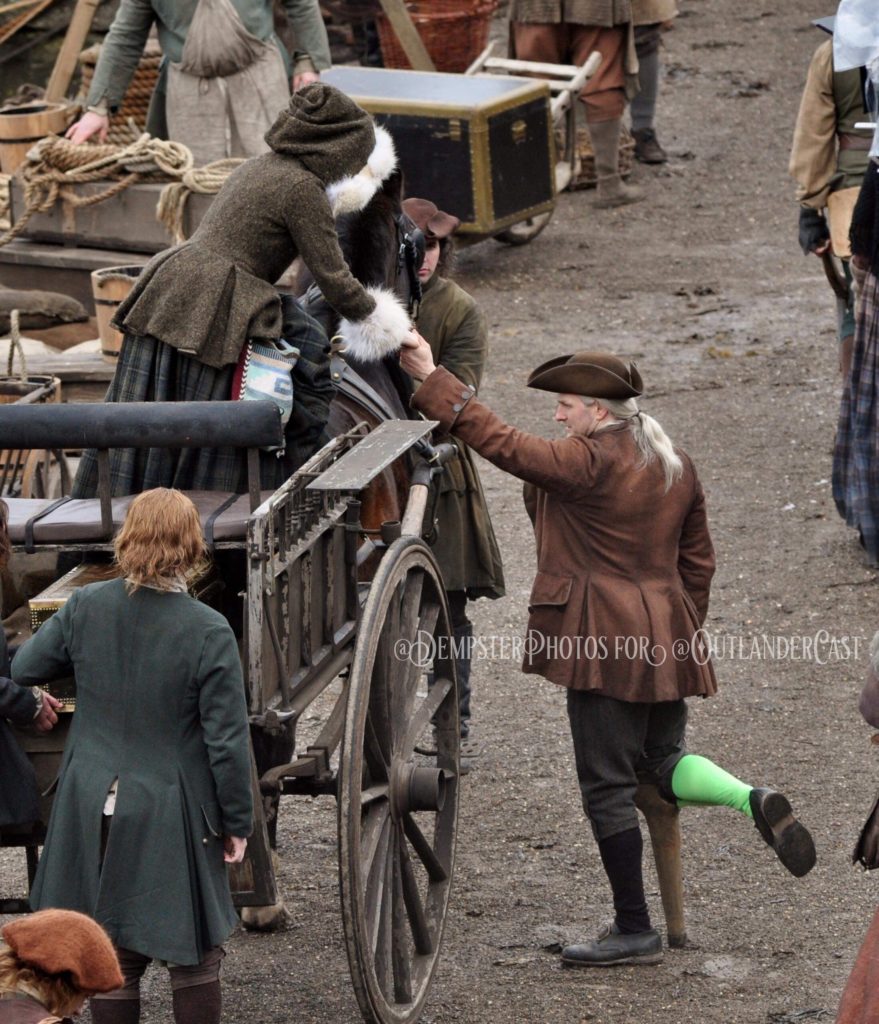 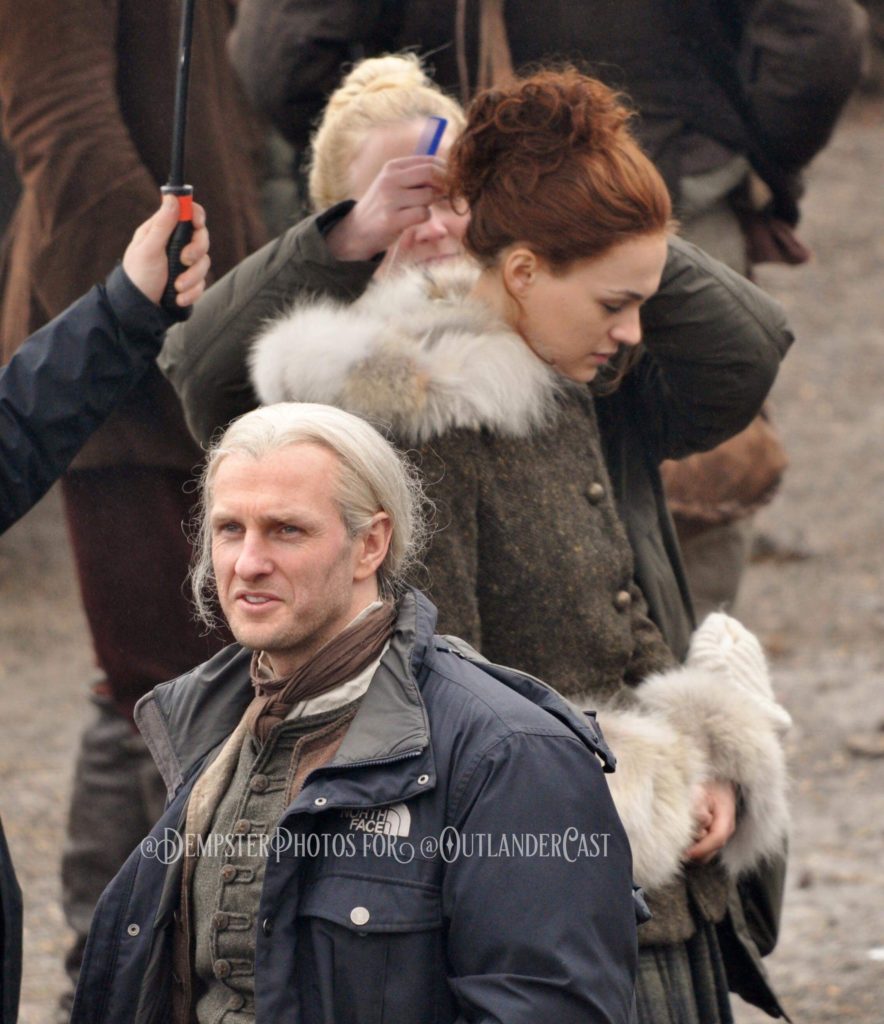 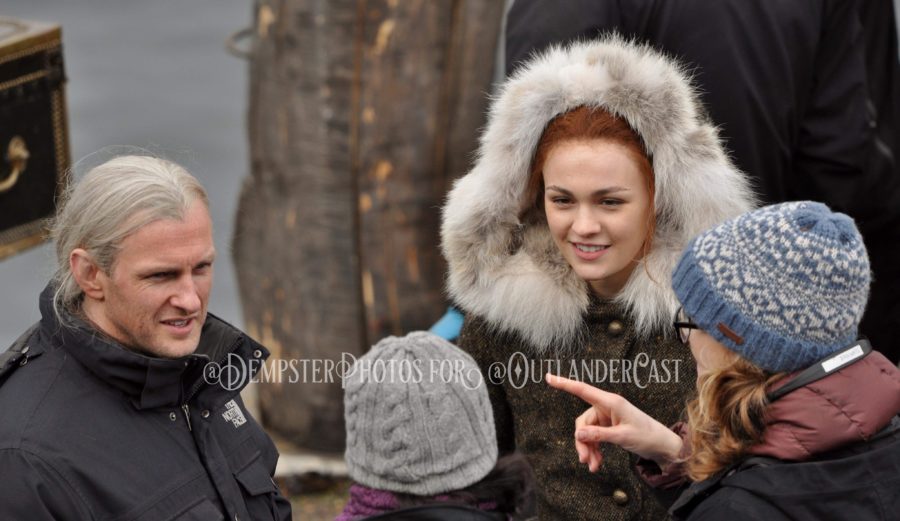 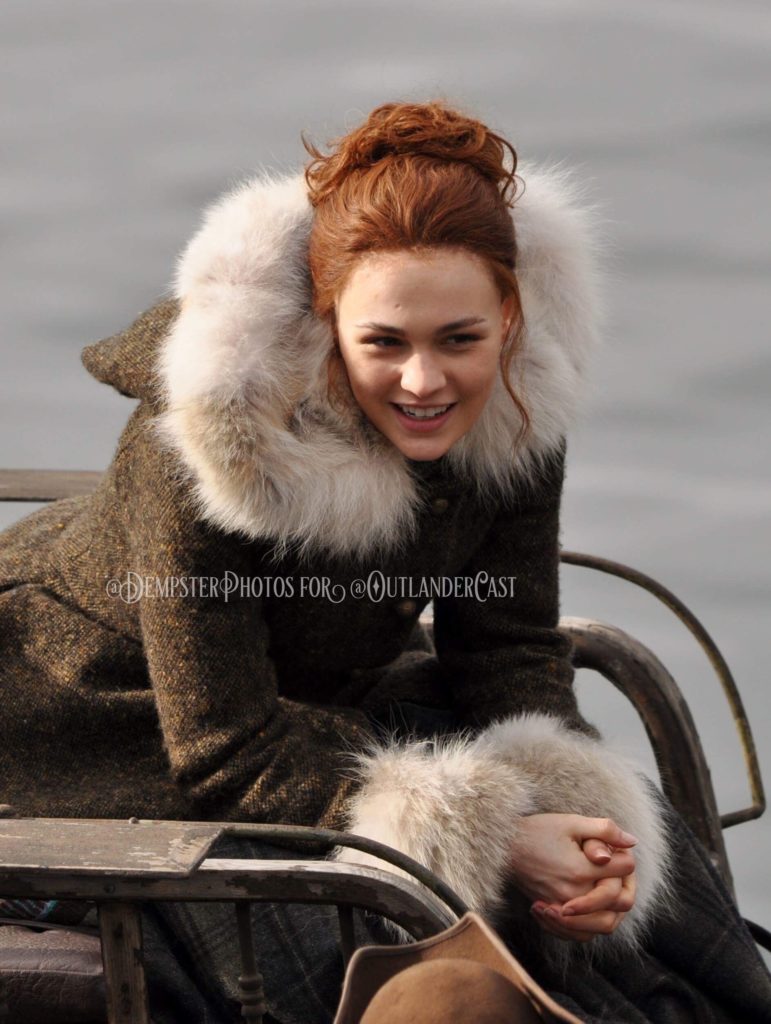 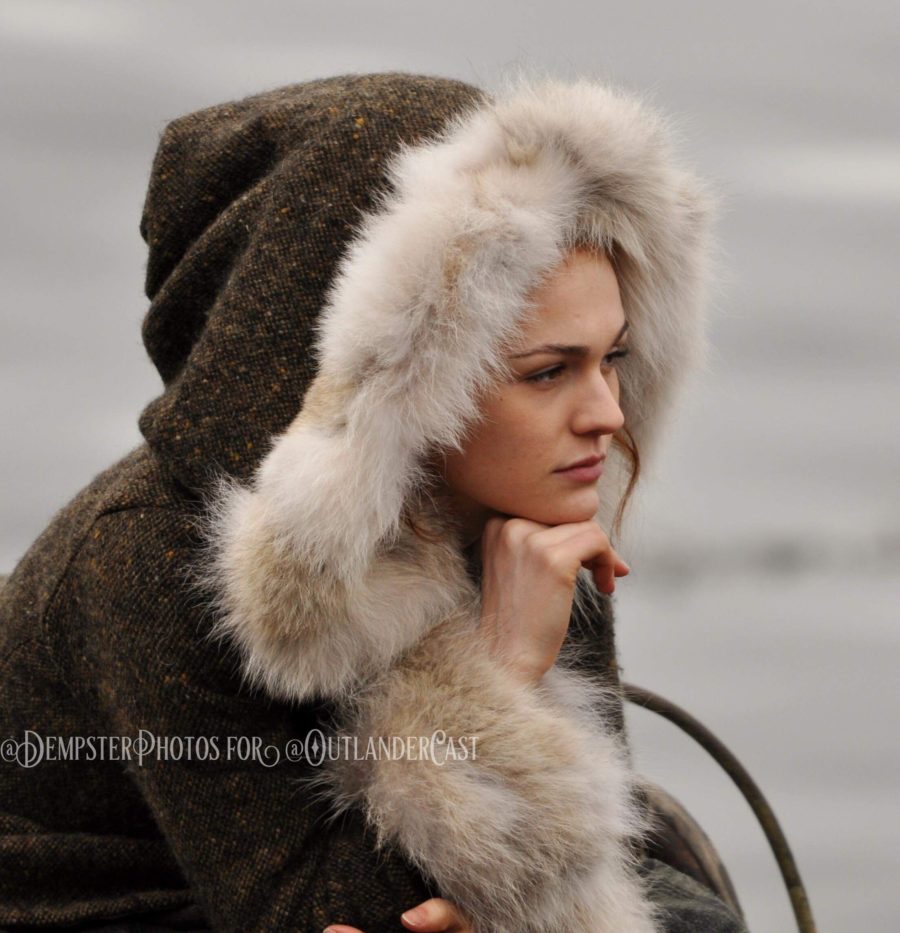 It was a freezing cold (so what’s new?) but fun day. As usual, there was a tinge of disappointment. We left when we saw Sophie Skelton drive off, the extras leave the scene and the packing up commenced — only to find out later that Richard Rankin arrived to do some other scenes! The book reader in me should have figured this out, but, oh well, you win some and you lose some. The balance of life. Plus, I had the bus trip home to think of, back to snow country in Glasgow! 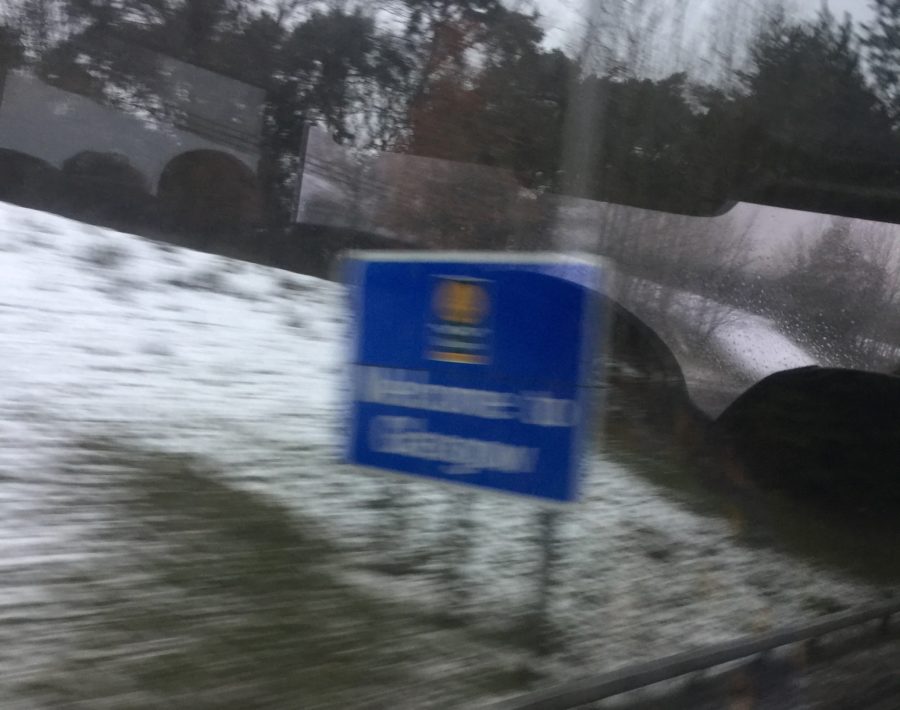