(First posted at outlandercast May 2018)
Keith Fleming is the Scottish actor who plays Lesley in Seasons 3 and 4 of Outlander. So far we have seen his role traverse two decades. He was in Ardsmuir Prison with Jamie Fraser and then he joined the reunited Frasers, a decade later, in their quest to find young Ian. I arranged to meet Keith to talk about his work on Outlander, his acting career and life in general.

We planned to meet for coffee at a bookstore in Glasgow. It was a beautiful, sunny afternoon and I thought I’d get there nice and early to just have a wee keek at the first few pages of Drums of Autumn. I wanted to remind myself about the fate of Gavin Hayes, to imagine what could be the possible trajectory for Lesley, who, of course, is not in the book.

However, first I decided on a wee bathroom break and, leaning forward, tipped my iphone into the toilet! I grabbed it quickly …. but too late ….. the screen was going haywire! So, I rushed to buy a bag of rice, shoved the phone in there, ran to the Apple shop, heard there was no hope, then ran back to meet Keith. Totally relaxed start to the conversation … not.

Keith, however, was lovely. Is this just a given for everyone associated with Outlander, I wonder? He had a radiant smile and a wicked sense of humour. Soon I forgot all about my phone and immersed myself in our enjoyable conversation. 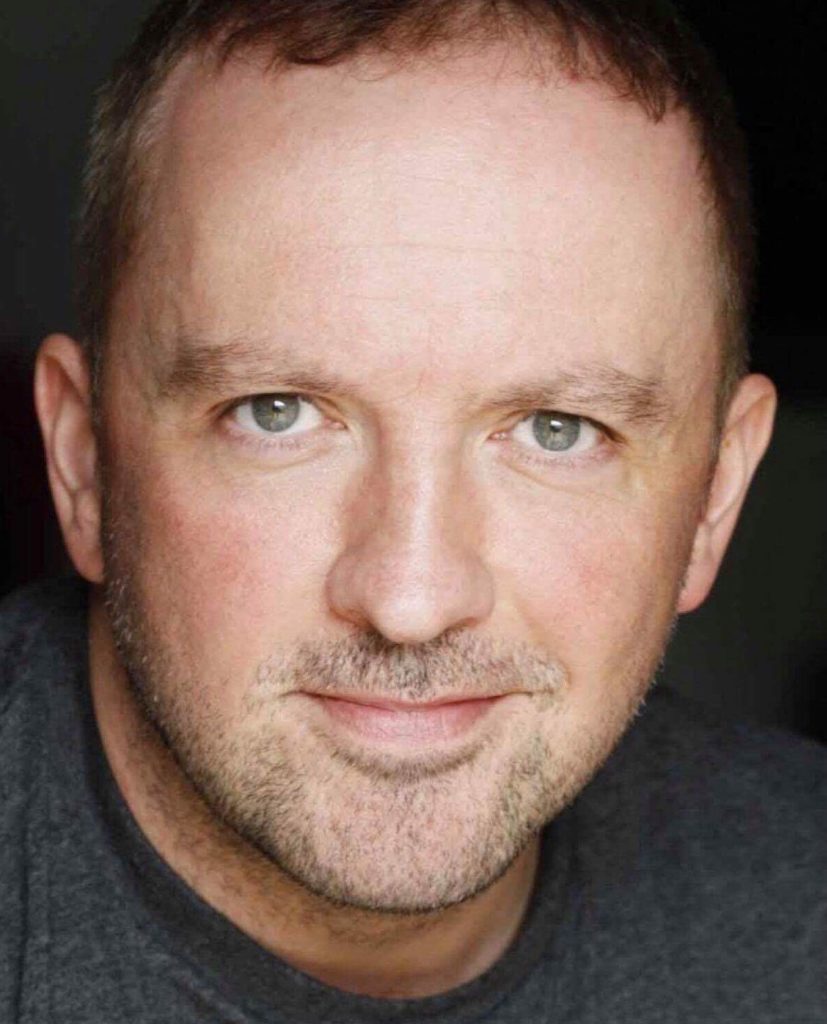 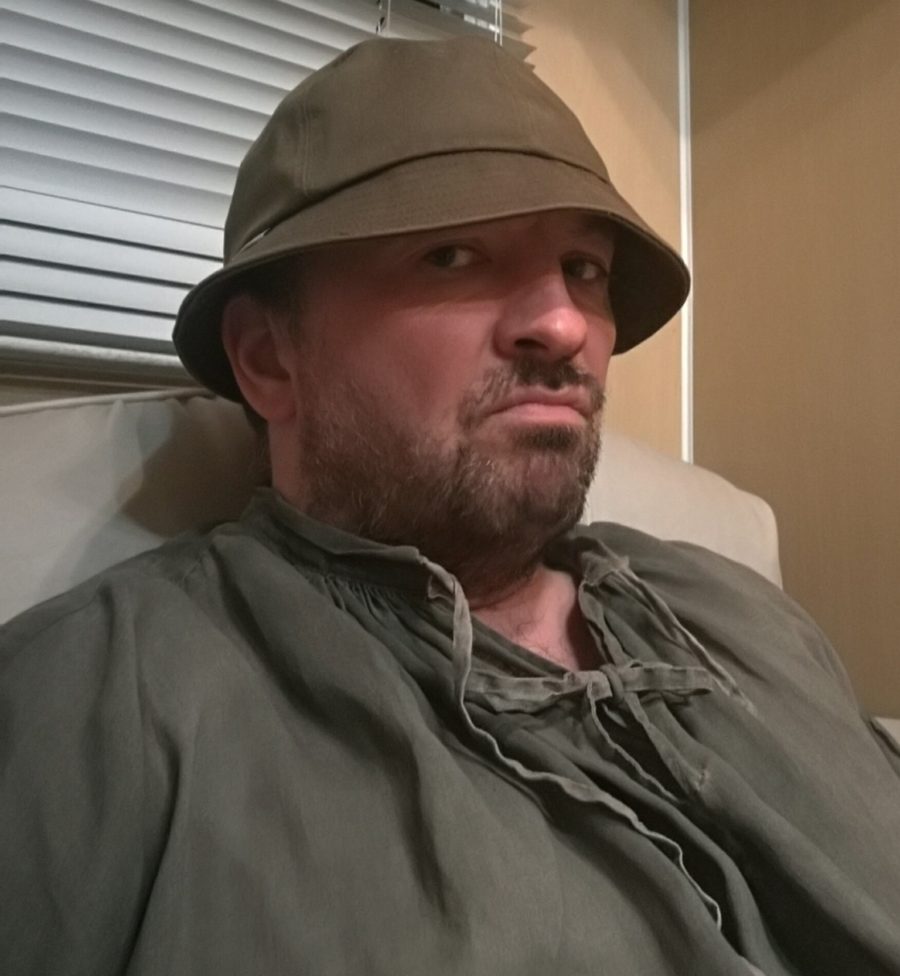 Keith grew up in Edinburgh, where he had a high school teacher who encouraged him to become an actor. She thought he would make a great Richard II, even though he was much more inclined to play Richard III. Keith also had a talent for painting and won a place at the prestigious Chelsea College of Arts. He followed that path for a year before returning to his acting passion and a place at another prestigious institution, the Guildhall School of Music and Drama at the Barbican in London.

He spent 10 years studying and working in London and then returned to Scotland to work in an ensemble company, the Dundee Rep Theatre. Keith worked on 39 productions there before it came to a natural end with a combination of personal and professional reasons. He then worked on a variety of theatre, film and TV productions.

Keith got the Outlandergig by the usual means. His agent told him about the roles for Hayes and Lesley and he was more drawn to the Lesley role. He tested with a number of other actors playing Hayes opposite him and eventually the casting director chose him to play Lesley and James Kirk to play Hayes. The two knew each other, as most Scottish actors seem to. Keith says he and James developed a good working relationship right from the start.

That said, Keith says it’s too simplistic and convenient to call Hayes and Lesley “the new Rupert and Angus.” Even though some similarities exist in the comic edge of their roles, the two are very different from the Highlanders of Series 1 and 2. Keith didn’t know the story of Outlander and hadn’t read the books before he took the part. And, while it might seem incredible to us fans, he still hasn’t watched the whole of Series 3. He says that he doesn’t really feel comfortable watching himself. 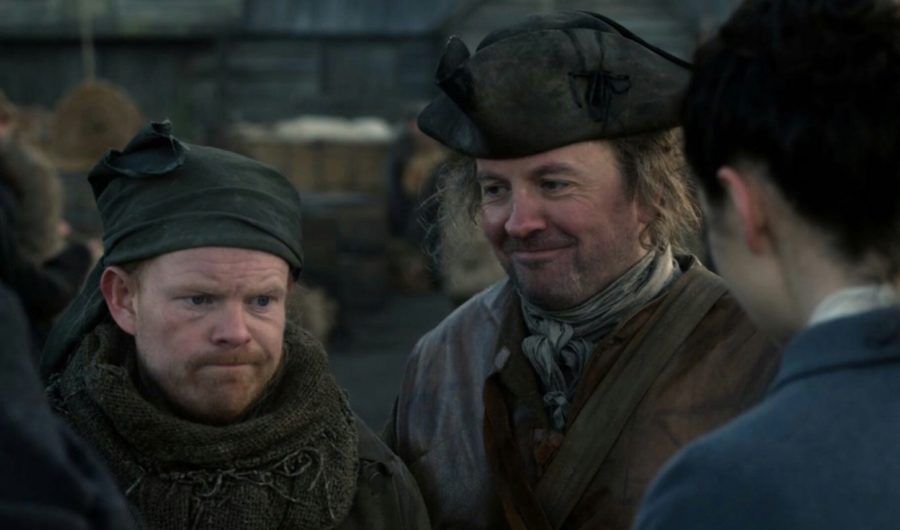 What was it like joining the Outlander show as a newbie, coming in to a team of people who’ve been working together for two years? Keith says he felt welcomed and quickly felt like part of the family. Everyone associated with the show — cast and crew — are wonderful people, dedicated to producing a high-quality show. Well, we knew that, right?

What of his relationship with the Outlander stars, Sam Heughan and Caitriona Balfe? Keith had known Sam since he was a young actor (but aren’t they both still young!?) before starting the job. Big Sam, he called him before describing a fan interaction as the two of them were walking along the street together in Cape Town. A man came up and told Sam he was the greatest Scottish actor and he wanted a photo with him (for his wife!). Sam deferred to Keith and introduced him as another Outlander actor, but the man wasn’t interested in that. He just wanted Sam. Keith describes Caitriona as beautiful and elegant (yes, we knew that!) and says she had “balls” and can hold her own anywhere. She’s fun too, with a wicked sense of humour.

You can get a bit of a feeling for the cast’s relationships from social media. Here’s Keith having a bit of fun and games on Instagram account, where he is @dundlejuice. 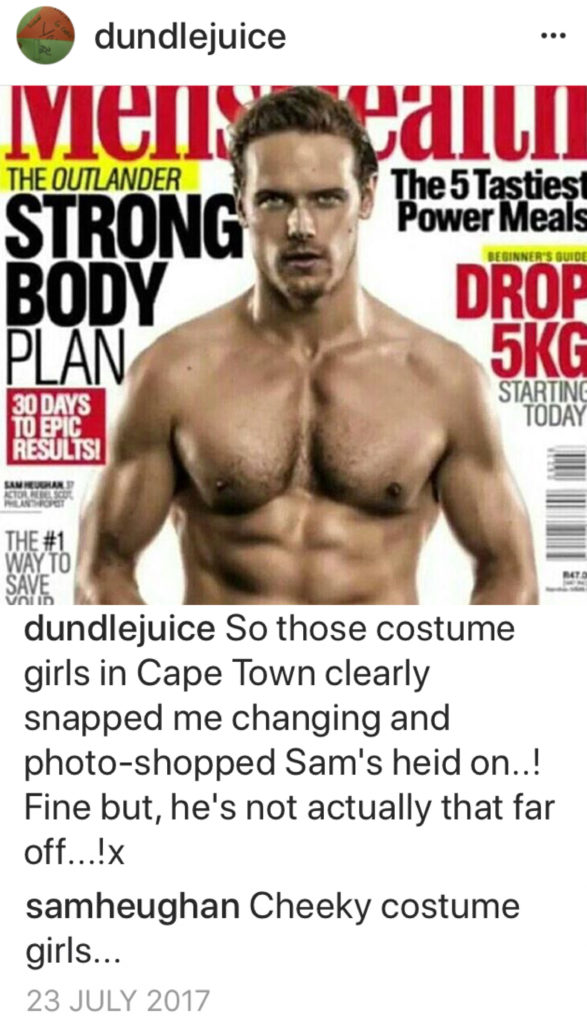 They filmed the Ardsmuir scenes at Craigmillar Castle near Edinburgh, followed by the leaving Scotland scenes filmed at Dunure on the Ayrshire coast southwest of Glasgow. Then the action moved to South Africa where they filmed all the shipboard scenes and the scenes in Jamaica. Their time in South Africa was a special experience. Keith says he felt a special affinity for César Domboy(the consummate Frenchman) and Lauren Lyle(they shared a sense of humour), and that they had a lot of fun together on days off. Poor Sam and especially Caitriona (who is in virtually every scene) get very little time off compared to the others who are in fewer scenes. After work or before work Sam is (of course) at the gym, so they tended to see a little less of him socially.

Cape Town was hot (especially for a Scotsman!) and Keith says long days in temps of up to 38 degrees Celsius (about 100 degrees Fahrenheit!) wearing a leather jacket, hat and wig could be pretty gruelling. (These Outlander actors certainly have to endure weather extremes to bring us the show, eh?) The politics and past history of South Africa were a distressing background to their time there, and it was particularly poignant, and disturbing, to be filming the slave market scenes there. Keith loved the place, the scenery and the environment, but the history is a reminder of a country that is trying but still has a way to go.

Keith talked a bit on the differences between being a stage actor and a film actor. On stage actors work consistently with a group of actors and directors and there tends to be a lot of collaboration and input from the actors. Stage actors also get a lot of feedback from the director and feel a responsibility to create the whole scene. In contrast, a supporting actor on film is more about knowing lines and just getting on with it, so that’s what you do. If you don’t get any negative feedback, well then you know you’re doing a good job.

One reality that can be disappointing for a supporting actor is that it is not uncommon for scenes to be cut. Also last minute script adjustments can mean suddenly having fewer scenes. Also, you might be “acting your socks off” in a scene only to find that you are not even visible.

Keith had some big ideas about the roles of Hayes and Lesley and this is where his sense of humour came into play ….. why not have a whole episode devoted to Hayes and Lesley à la the iconic Sopranos’ “Pine Barrens” episode with Chris and Pauli in the forest! Or better still, how about a great sex scene for Lesley, or Lesley could just happen to knock on the door or barge in when Jamie and Claire are at it? Maybe he missed his calling as a writer or director?

Indeed, one item on Keith’s bucket list is writing and producing a Christmas show. These are big in Scotland and around Christmas time theatre fans can choose from a large number of pantomimes. Keith loves the ones with an edgy irreverence, where the children can enjoy the show on one level, but there’s a subtle (but hilarious) adult level to the show. I saw my first “panto” last Christmas in Glasgow and it certainly is a big deal in Scotland.

Keith has had some strange experiences with the Outlander fandom, mostly associated with people trying to make contact with Sam and Caitriona through him. People have messaged him on Twitter and asked him to track down the gifts they may have sent to Sam and Caitriona. Awkward! But Keith is philosophical about this and says that, like everyone associated with the production of Outlander, they value and respect the fans and realise that without the fans, there would not be a show.

His best, worst and funniest Outlanderexperiences? The best thing was the welcome to Outlanderfrom the cast and crew, and how quickly he felt like part of the family.

He doesn’t really have any worst experiences — no injuries or dramas. But he mentioned the time poor John Bellhad a heavy barrel dropped onto his toe, not once but twice – ouch! “Scene 26” on board the ship was memorable for the time it took in confined spaces and trying to get all the conditions of light and wind just right for the repeated takes. And then there’s the annoying but hilarious behavior of Rollo, who would be completely still and quiet while they were preparing and rehearsing, but the minute he heard “rolling,” he would move out of position! So, it’s back to square 1.

So, what is Keith up to now? Most recently, he was in an acclaimed production The Macbethsin Glasgow. He is fiercely proud of the show, and his friend and costar Charlene Boydhas been nominated as the best female performer by the Critics Awards for Theatre in Scotland.

The day after we met, Keith was heading to London for a meeting, which could lead to another job. The life of an actor, he says, is a juggling one. Sometimes you will be performing a play in the evenings and rehearsing for another during the day. It can be hard, but Keith says it’s important not to stress and worry about a role before you land it. Some actors get really anxious about auditions, but Keith tries to keep relaxed and relies on being well prepared. If he’s right for the role, it will happen.

I’m really looking forward to seeing Keith in Season 4. And we have to wonder what will become of the character of Lesley beyond that? Book readers know the fate of Gavin Hayes, but what of Lesley, who was created for the show? Keith sees Lesley as a “protector” in the Fraser family. Will he turn up at Fraser’s Ridge? Only time will tell.

P.S. Unfortunately, we found out later that poor Lesley meets a grim fate right at the start of Season 4?