Contagion in Outlander: What did Claire Fraser Do? The global Covid-19 pandemic brings to mind other health emergencies, real or fictional. Here’s a look at contagion in Outlander and how Claire Fraser handled it.

We are living through difficult times. Everyone is affected, and it is tempting to say we are “all in the same boat,” but as time goes by we can see that this is not the case. There is a great difference between the effects of the COVID-19 virus across communities, social groups and countries. It’s a complex picture in a complex world. And it got me thinking about the parallels with the contagious diseases that Claire Fraser (Caitriona Balfe) has faced in Outlander. We are finding that politics, personal values and beliefs are all part of the picture with a public health emergency. Was it any different in Claire’s time? 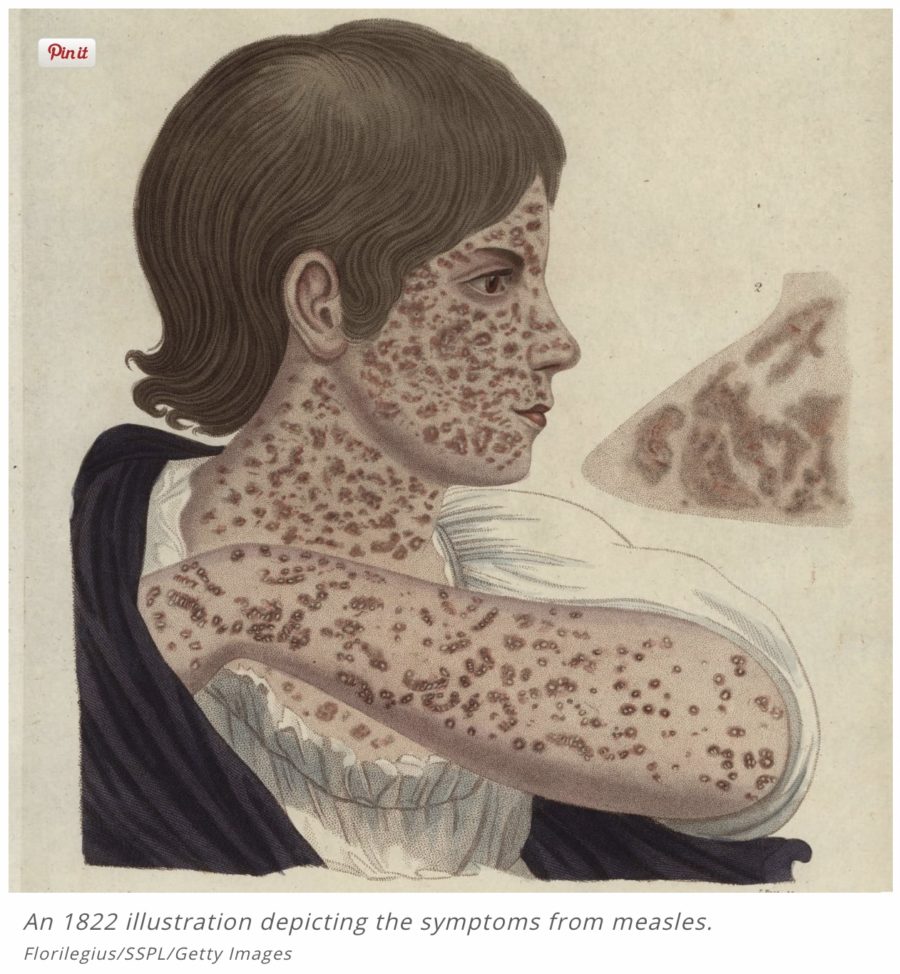 In the Outlander stories so far, Claire has been at the epicentre of two contagious disease outbreaks.  The first was when she was abducted by the captain of the Porpoise to tend to the huge numbers of his crew who were suffering from typhoid fever. Then Claire has to contend with the measles epidemic that spread to Fraser’s Ridge from the settlement of Cross Creek. Typhoid and Measles are different in that Typhoid is a bacterial infection (if only Claire had her penicillin!) while Measles is an airborne viral infection, with more similarities to our current situation.

In Outlander Season 3 Claire is called upon to deal with an outbreak of Typhoid.

In Episode 309 “The Doldrums”, she agrees to leave the Artemis and board the Porpoise to advise Captain Leonard on what to do with his stricken crew men.

At the start of Episode 310, “Heaven and Earth”, it is clear that Claire has been abducted and effectively pressed into service on the Porpoise. Jamie’s (Sam Heughan) attempt to get her back leads to a violent stand off with Captain Raines, and Jamie ends up in the brig. Captain Raines must bow to the authority of Captain Leonard and is himself powerless to prevent that situation.

Unable to cure the disease (again, gimme the penicillin!), Claire works tirelessly to contain further spread. She isolates the sick from other crewmen — isolation and social distancing, sound familiar?

She must treat the sick where they cannot come into contact with those who are well. This disease is not airborne, so face and mouth coverings are not necessary. Claire introduces strict hygiene practices — hand washing, don’t put your hands in your mouth Mr. Pound. We know all about that now don’t we? 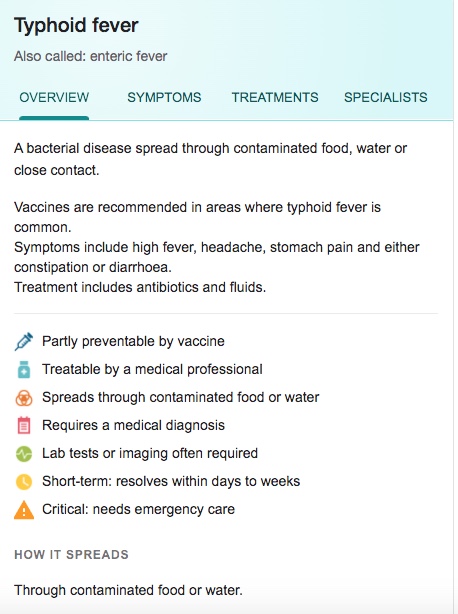 As well as using infection control practices for the outbreak, Claire knows she must find the source of the disease and she looks for evidence. She is a scientist after all, and she needs the facts to inform her practice. She goes to the ship’s log and studies the cases of those who have died and tries to make sense of the data. 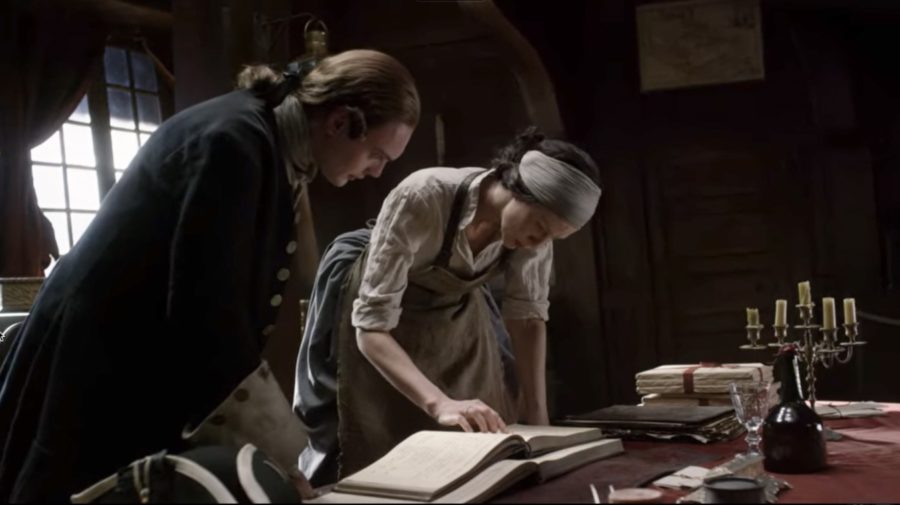 Claire makes a link to one person in a close knit work group who did not become ill, despite all his close associates having died. By contact tracing she locates the dreaded asymptomatic carrier!

She traces him to, of all places, the ship’s galley, where he is handling and preparing food! Of course, no one will believe Claire that a person who is not ill could possibly be causing illness in others — they were ignorant of disease transmission back then, and had no understanding of rigorous scientific approaches. But we know better now, right? 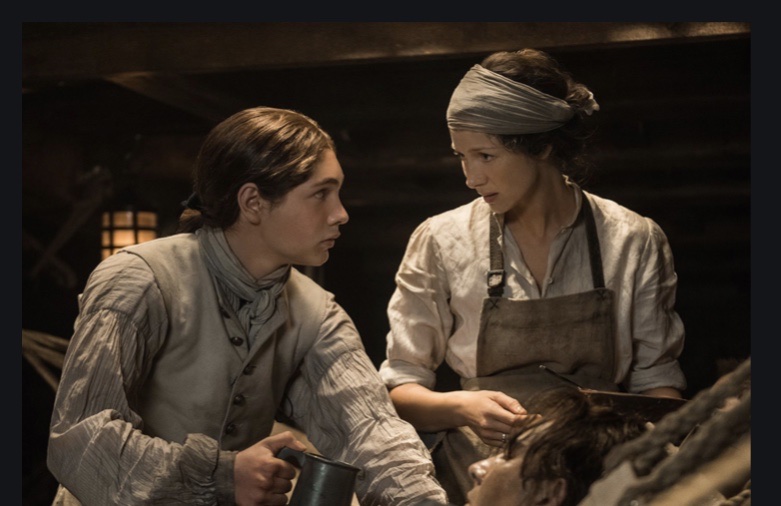 In the end, many of the crew perish from the disease, including the lovely, young Elias Pound (sob!)  but through her hygiene practices, finding the sources of the contagion and separating the sick crew, the numbers of infections gradually reduce. Yay! Claire has ‘“flattened the curve” and saved the day.

Unfortunately, the baby-faced but dastardly Captain Leonard still intends to use her as bait to capture Jamie and hand him over to the authorities. Where is the justice in that!

In Outlander Season 4 the Mueller family and Lord John Grey become infected with Measles, or “the measle” as they refer to it. 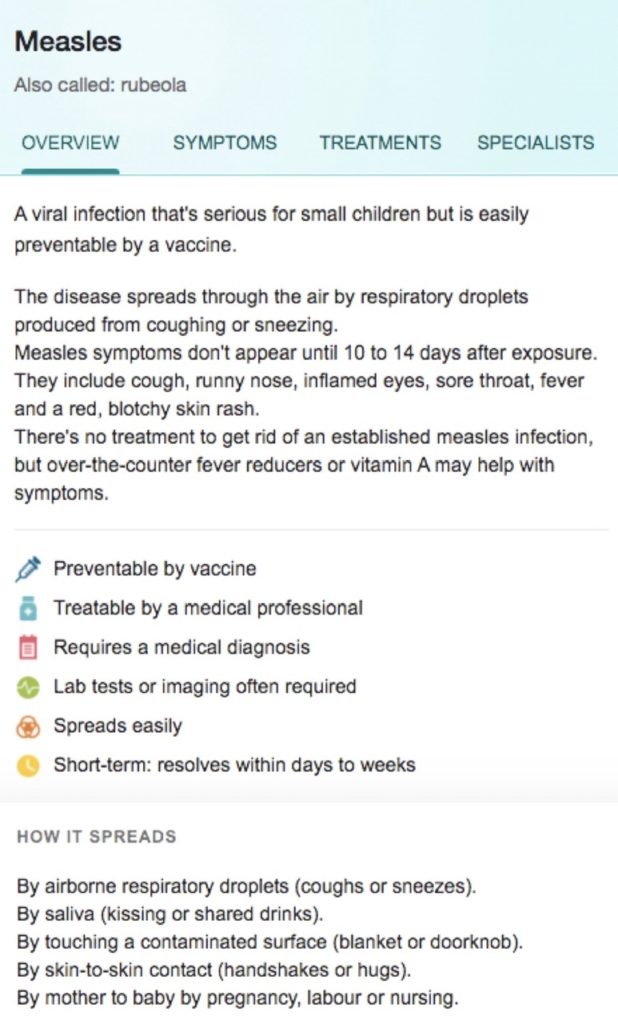 On a personal note regarding measles, I grew up in a time before the measles vaccination (or other commonly used vaccinations today) existed, and it was customary then for families to “expose” their children to contagious diseases so that they would then have immunity. I remember seeing family pictures of me as a child, where there were three or four of us, family and friends all covered in spots, having the measles together. It was a risky business, and very fortunate that none of us developed serious cases of the disease, but there was no alternative then. The vaccine was not developed until 1963. 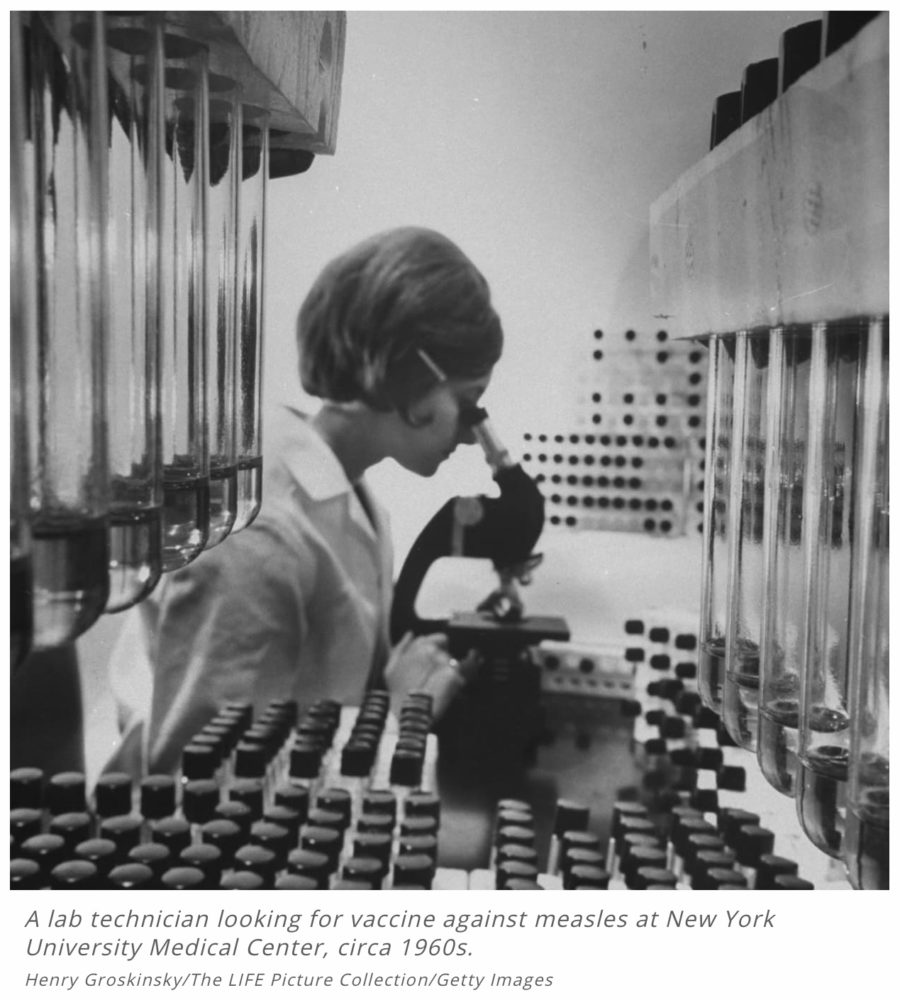 The situation with the Muellers was complicated. Herr Mueller is grief stricken that his daughter, Petronella, and baby granddaughter, Klara (named after Claire, remember?), have died and he cannot accept Claire’s scientific view of the situation. For him belief and prejudice override science — sound familiar? He cannot be shaken from the notion that the illness has been caused by the Native Americans who, he believes, have cursed his family. Claire tried to explain that different people have different beliefs and customs but Herr Mueller would have none of it. Again, in those times, relying on hearsay, prejudice and adhering to rigid belief systems were the norm for explaining the origin of disease.

It all starts in Episode 405, “Savages”, when Herr Mueller returns from Cross Creek with a gift for his unborn granddaughter. Is it implied that the doll was carrying the contagion? Later on Herr Mueller tells Claire that he and his wife were both sick with the measle, but recovered, and there is also an implication that Petronella’s husband had died recently — from the measle?? By one of these means, Petronella and her baby daughter become infected and die. Claire tries to explain that a woman who has recently given birth, and a tiny infant are at especially high risk of contracting the disease, but these facts fall on deaf ears.

This episode, of course, culminates in the tragic scene where Herr Mueller presents Claire with the scalp of her friend, and fellow healer, Adawehi. In his misguided way, he believes that he is doing a service to Claire. Claire despairs that she was not able to get Herr Mueller to understand the facts of the situation, with dire consequences for innocent people.

In Episode 406, “Blood of My Blood”, when Lord John Grey appears at Fraser’s Ridge with young Willie, it becomes apparent that he also has contracted measles. Claire knows that this is an airborne contagion (like COVID-19) and that she must protect others from coming into close proximity with Lord John. She knows she is protected by vaccination, and they think Jamie has immunity from contracting the illness in his childhood.

But immediate action is taken protect young Willie. Even though it will cause him intense emotional distress to be separated from his father at this time — remember that his mother died recently of a contagious illness on the ship from England — Claire insists that Willie be taken away from Lord John for the entire period during which she knows he is infectious.

This is not unlike what many of us are suffering now, being separated from loved ones when they are ill, and possibly dying. The anguish is extreme, and here Jamie must support the young Lord through this traumatic time, while Claire tries to save Lord John. 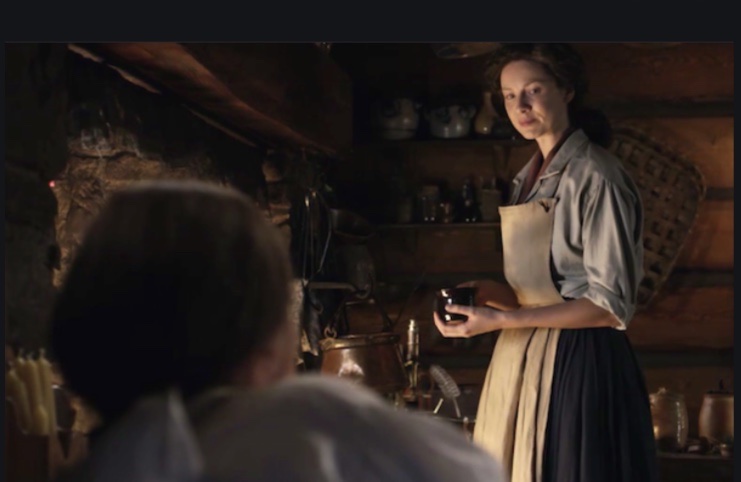 Claire keeps Lord John in quarantine and cares for him through the illness, by treating his symptoms. There are times when it seems he may die, but eventually he does recover. 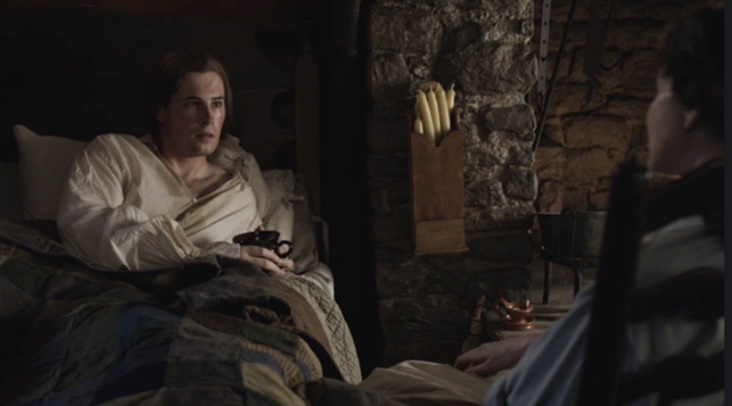 Claire Fraser always rises to the occasion when medical matters arise. Claire’s experiences with typhoid and measles help us draw parallels to our experiences today. Diseases may be treated and often cured by medical practitioners, but there is no cure for most viral illnesses. Health care workers can only treat the symptoms in front of them. And we all know that prevention is always better than cure. While we wait for a COVID-19 vaccine to be developed our best course of action is to follow the advice of the experts. By cooperating and adhering to evidence-based public health advice, we can work together to reduce the spread of contagious disease in our communities.

P.S. on a lighter note, the behind-the-scenes pictures of David Berry getting the measle make-up are fun to see! 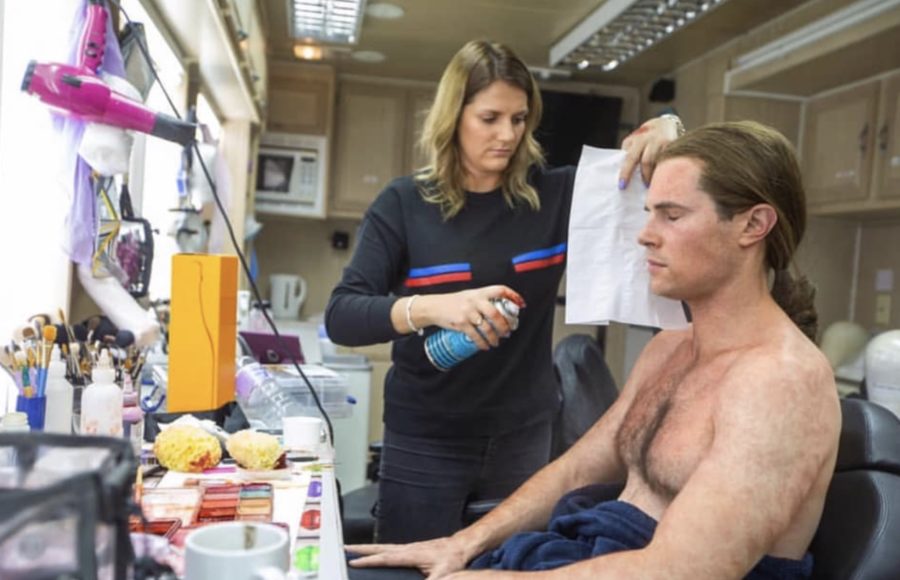 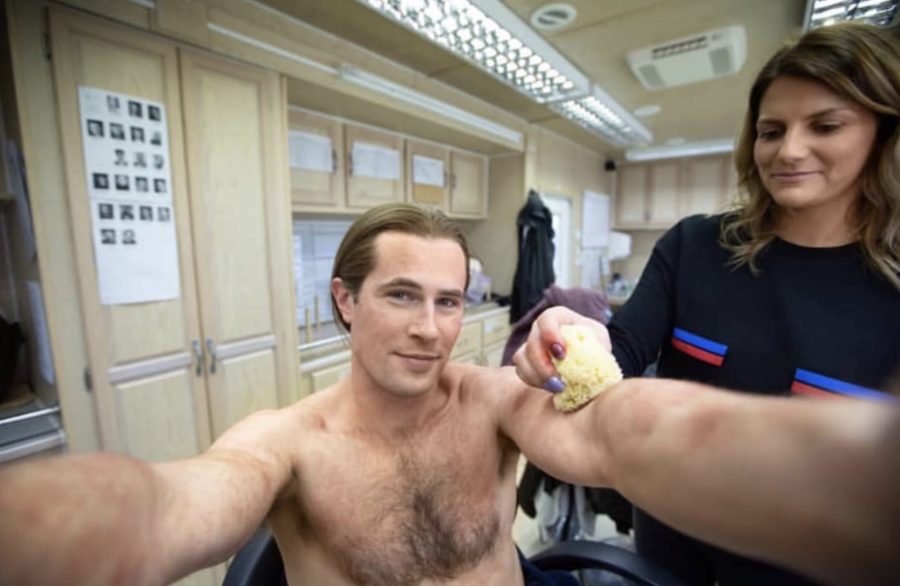