(First posted at outlandercast January 2018)
I arrived back from my month long sojourn in Massachusetts — with snow and ice in abundance — to find that the same conditions were prevailing in Glasgow. The locals say it’s unusual, but I’ve been living in a winter wonderland for many weeks now. So, that’s the backdrop to seeking the places where Outlander is filming. We need to brave the frost, cold and rain, as do the cast and crew. And by the way, being there and seeing the conditions they work through does fill you with admiration, as well as an understanding that it’s not all glamour. It’s bloody hard work they do to bring our favourite stories to life.

My last post gave us a view of Rollo and other parts of Season 4. This latest chase started with all the online excitement surrounding the supposed Fraser’s Ridge being built in a forest park near the Outlander studios, just outside of Glasgow. So many pictures were showing the wee cabin under construction, but hopes were dashed a bit when Jon Gary Steele  said on Twitter that this was not Jamie and Claire’s cabin. We now know that this is the Mueller’s Cabin from Episode 405 ‘Savages’ 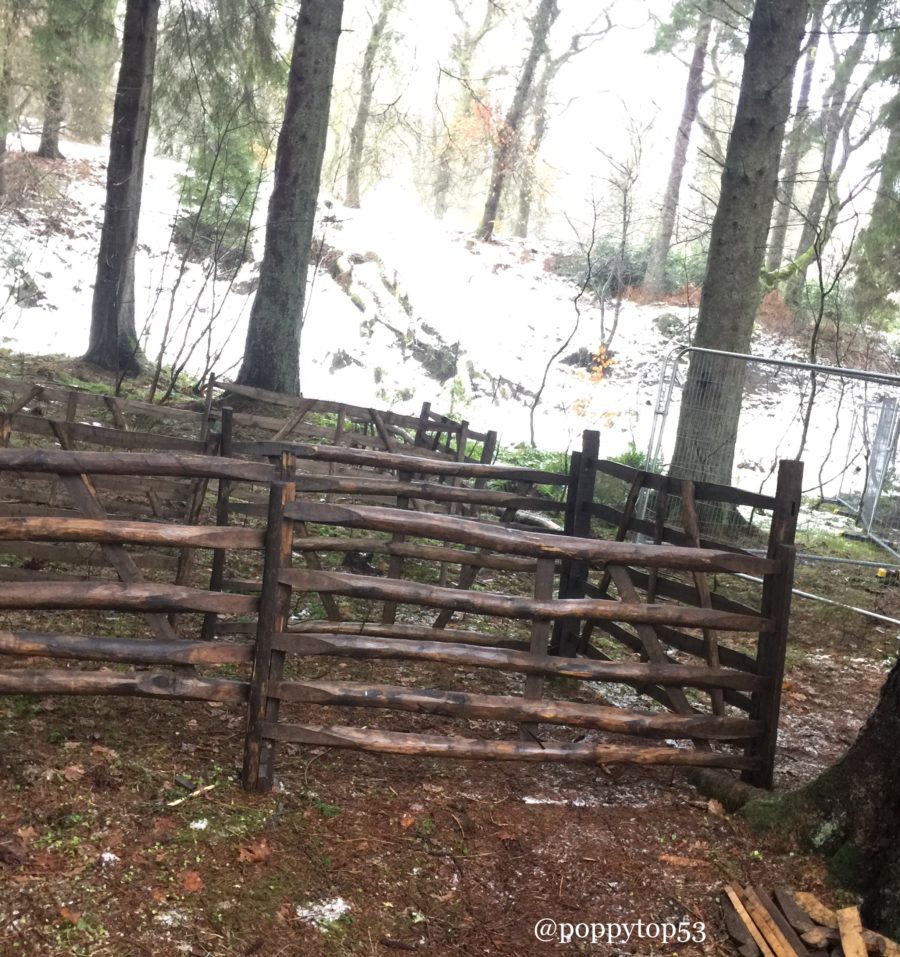 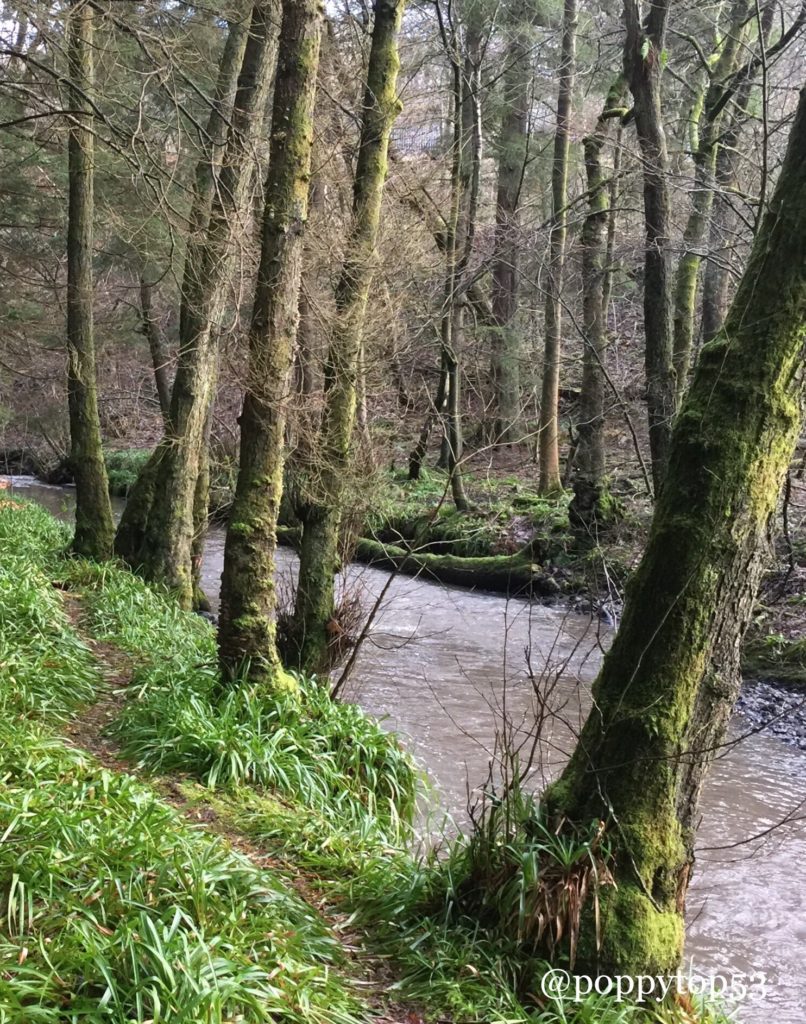 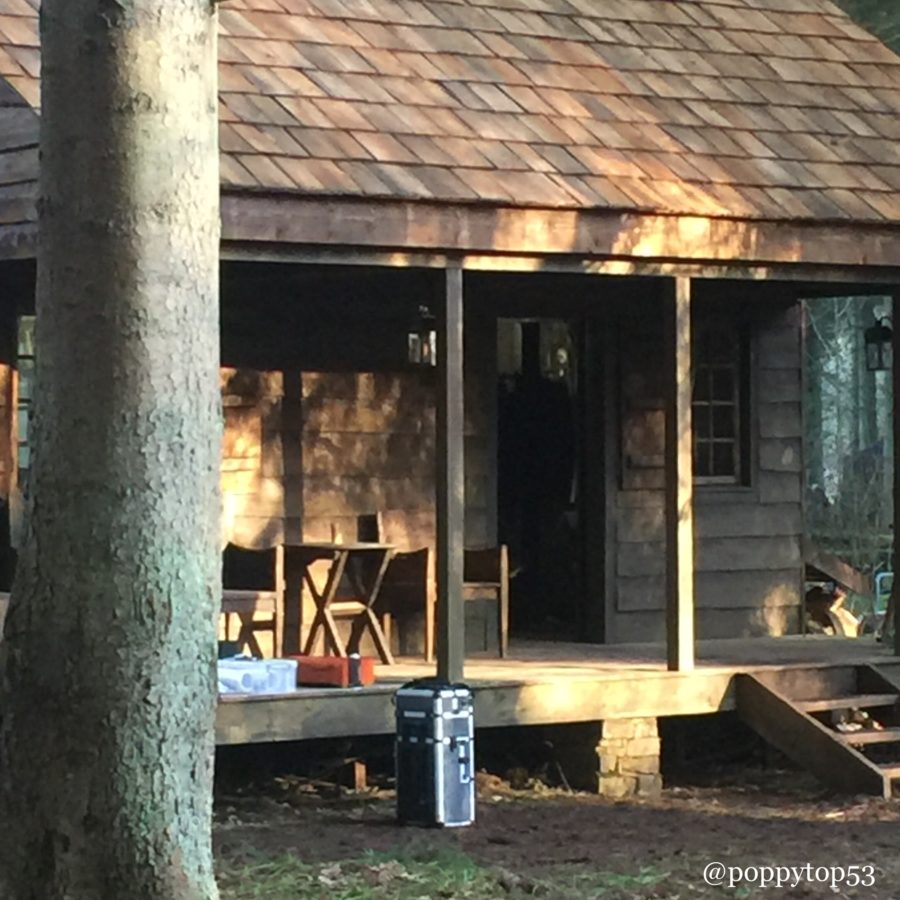 Lucky for me, I was staying with friends near filming, and we could just whip down for a reccy, or maybe two or three. Even if it wasn’t Jamie and Claire’s cabin, it was beautiful, especially on the day when it had been snowing. One day I was there for a look and a group of Outlanderbigwigs were wandering about, conferring in huddles, sussing out filming angles and such. I spotted Jon Gary Steele in the group and as he walked past me, I pointed a mock finger at him and asked, “Why did you say this is not the place?” He laughed and said, “Well it’s not that cabin … You’ll see.” 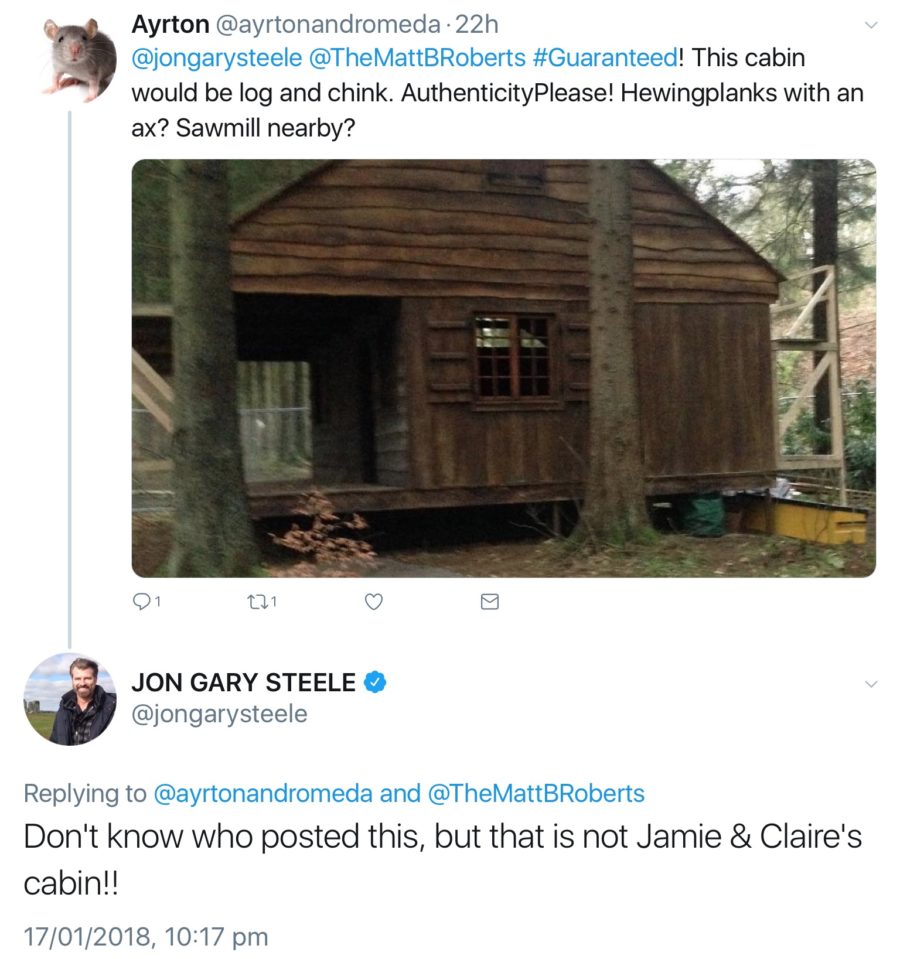 Before filming could commence at that location, there was a call to get over to Falkland. You may remember that the village of Falkland, in the Kingdom of Fife, has been used as the location for 1940s as well as 1960s Inverness. So, the best guess was that these would be scenes with Roger and Bree. As it turned out, there was no sign of Sophie Skelton on the set but plenty of Richard Rankin. 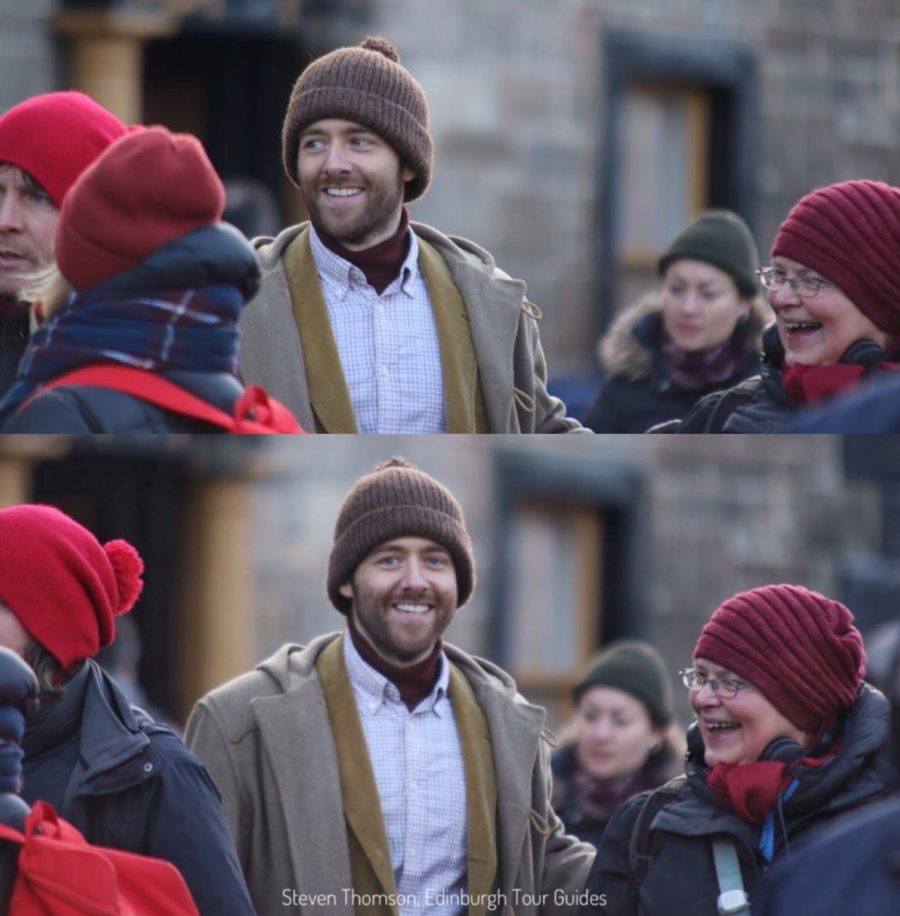 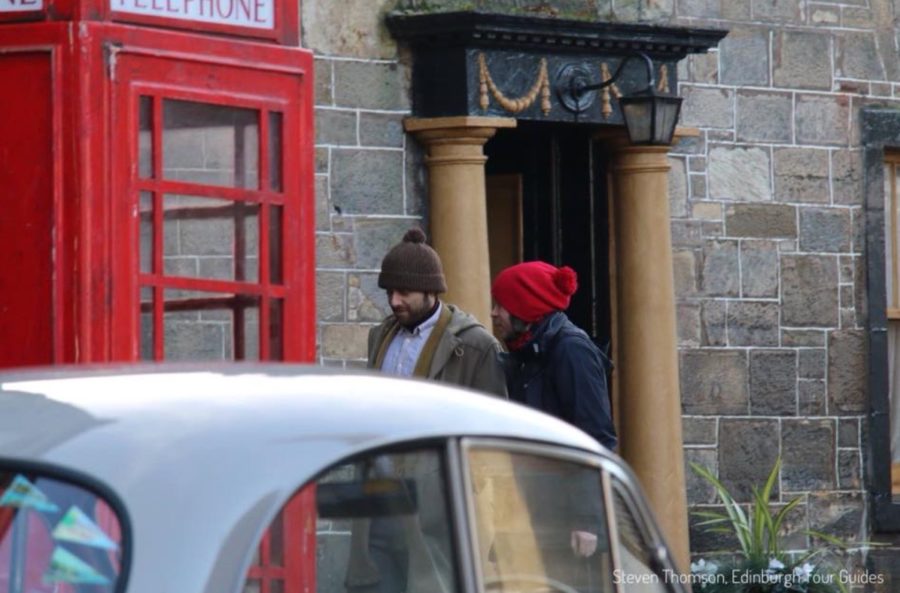 The crowd of onlookers at Falkland was pretty big, and we were mostly held well back from the action. Scenes included Roger coming and going from Mrs Baird’s guest house, 1960s cars driving up the street and lots of costumed extras setting the scene. The attention to detail in the street and in the shop windows was, as usual, amazing and so great to see close up. 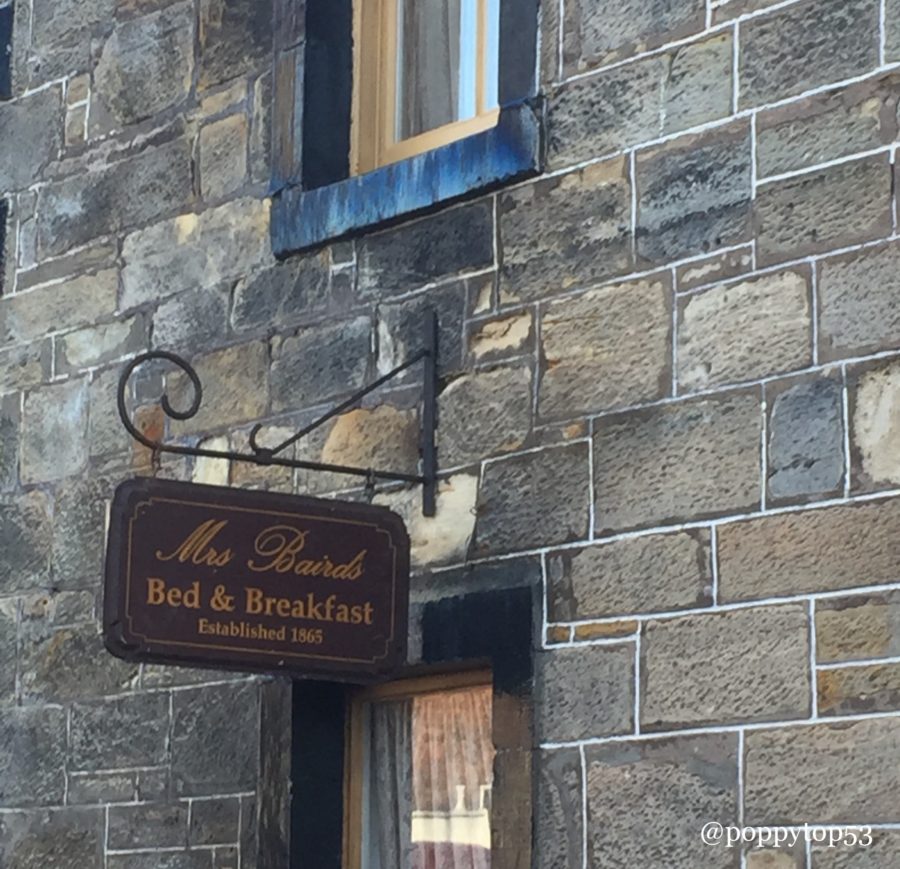 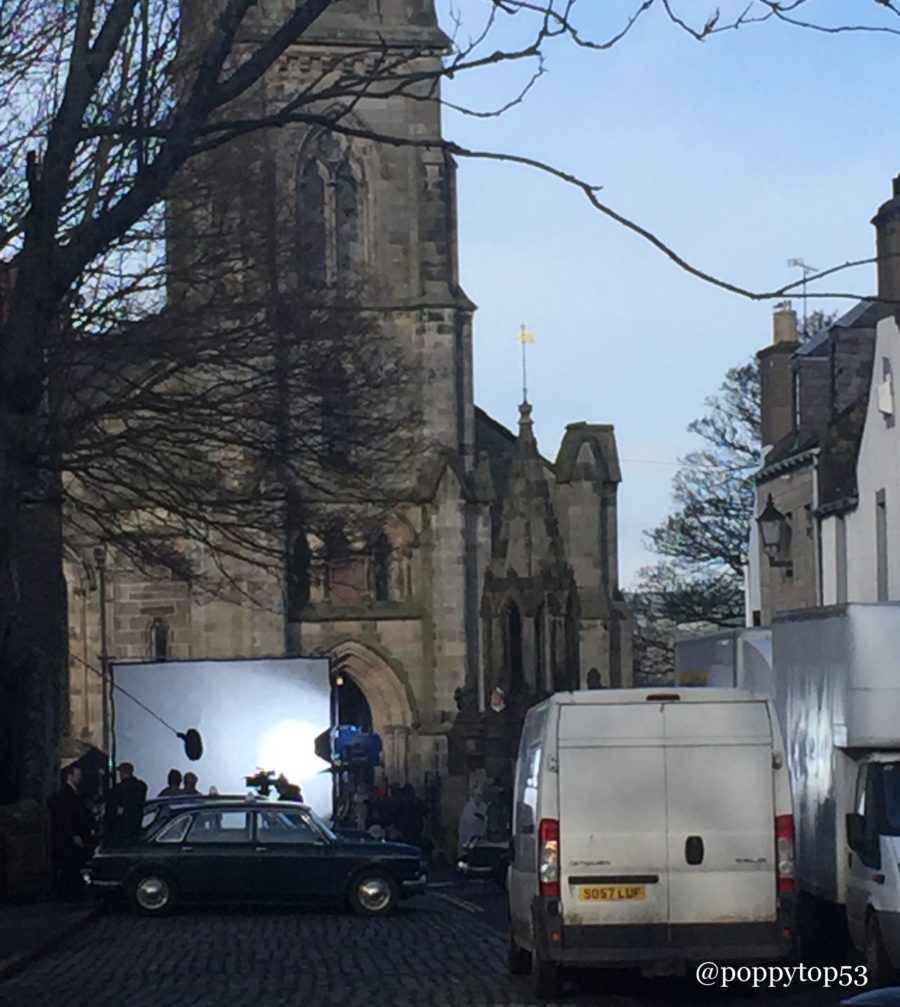 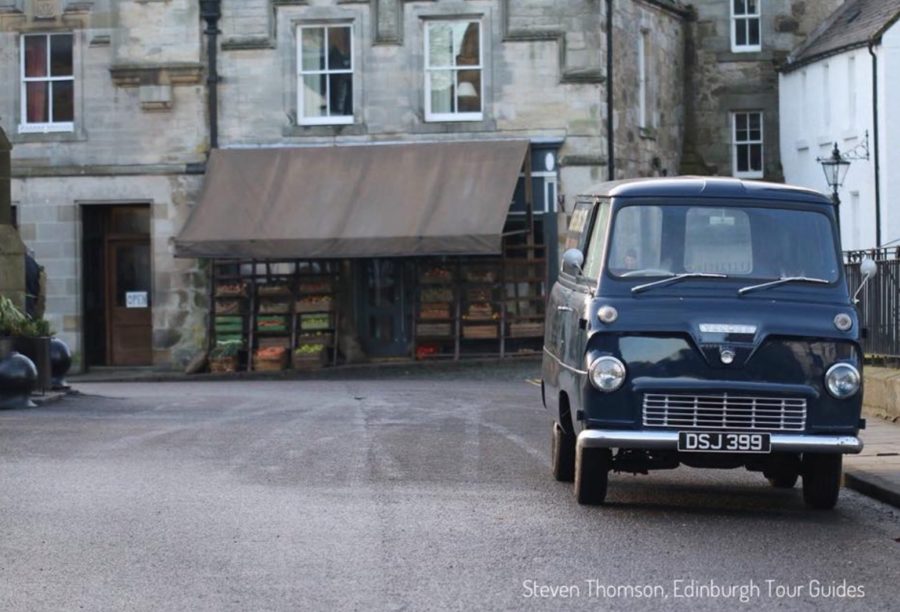 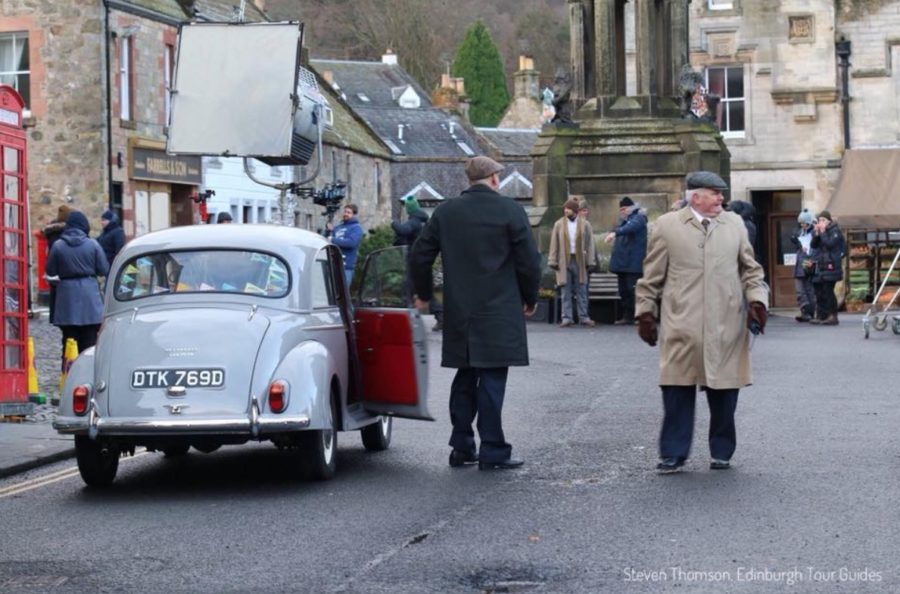 Filming at this location wrapped in the early afternoon, and as I was walking back to my car I spotted a clue. The luminous orange signs that lead the drivers to the filming locations and to their base. I was on the trail. It took about 10 minutes until the signs turned down a road to a big farm. The road got narrower and muddier, and by the time I reached the end of it, I was in the middle of a convoy of Movie Maker trucks and other vehicles. Oops! 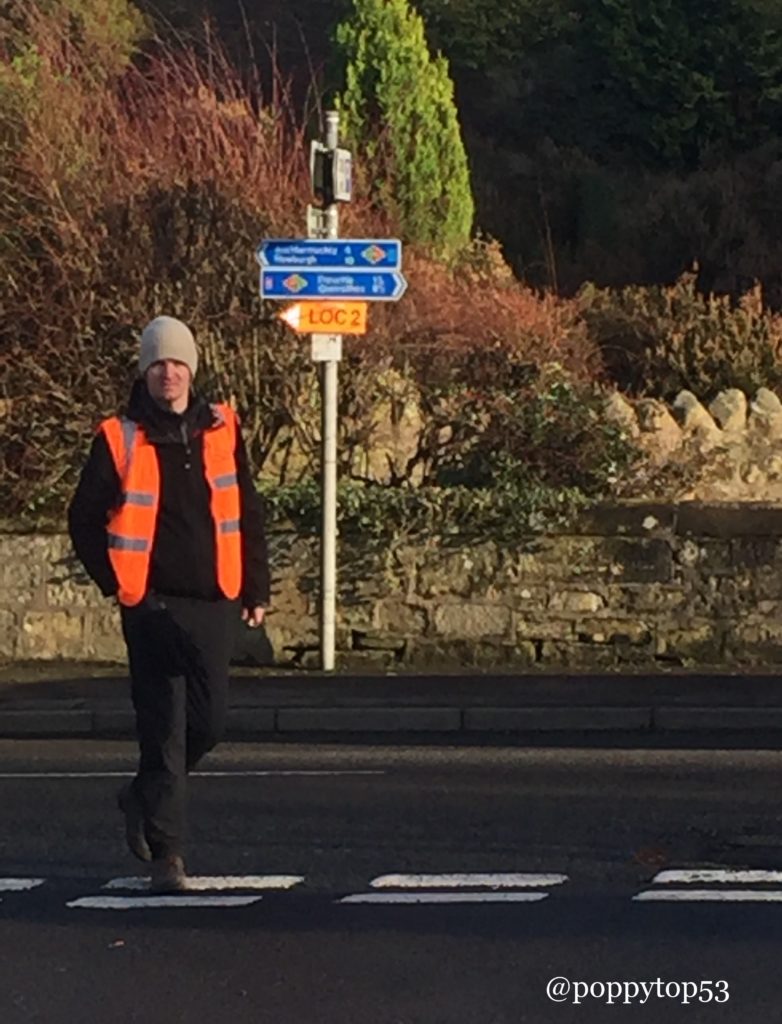 I was informed that there was no way the public could watch here because it was all going to be indoors. A gigantic barn right there was the location. So I was asked politely to turn around and leave. Easier said than done with all those trucks bearing up the narrow road. The farmer came out to show me another exit and I drove down the road a bit and then pulled over to think. What next? I talked with another woman and her daughter who were in the same boat as me – love those easy Outlander fan connections – we were having a good old chat when we saw Sam Heughan whiz past. Great excitement ensued and they decided to run up and try to catch him before he entered the barn. 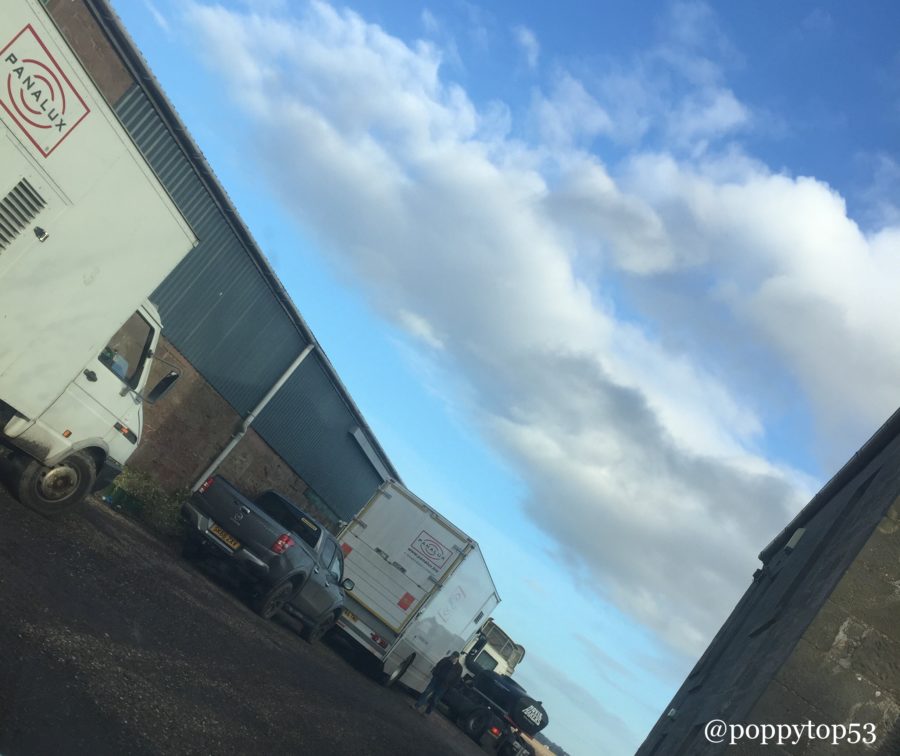 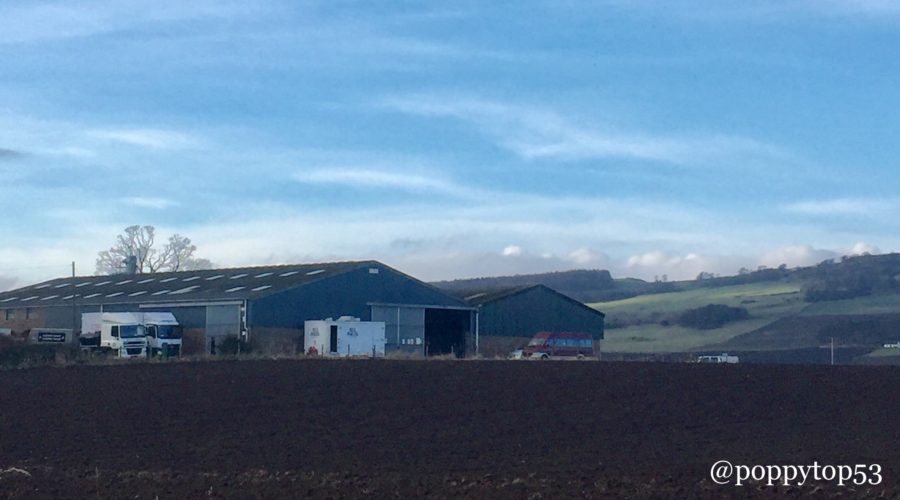 I wondered why they would come all that way out of town to film inside this gigantic barn, especially since according to Caitriona Balfe, conditions inside were not too good either! 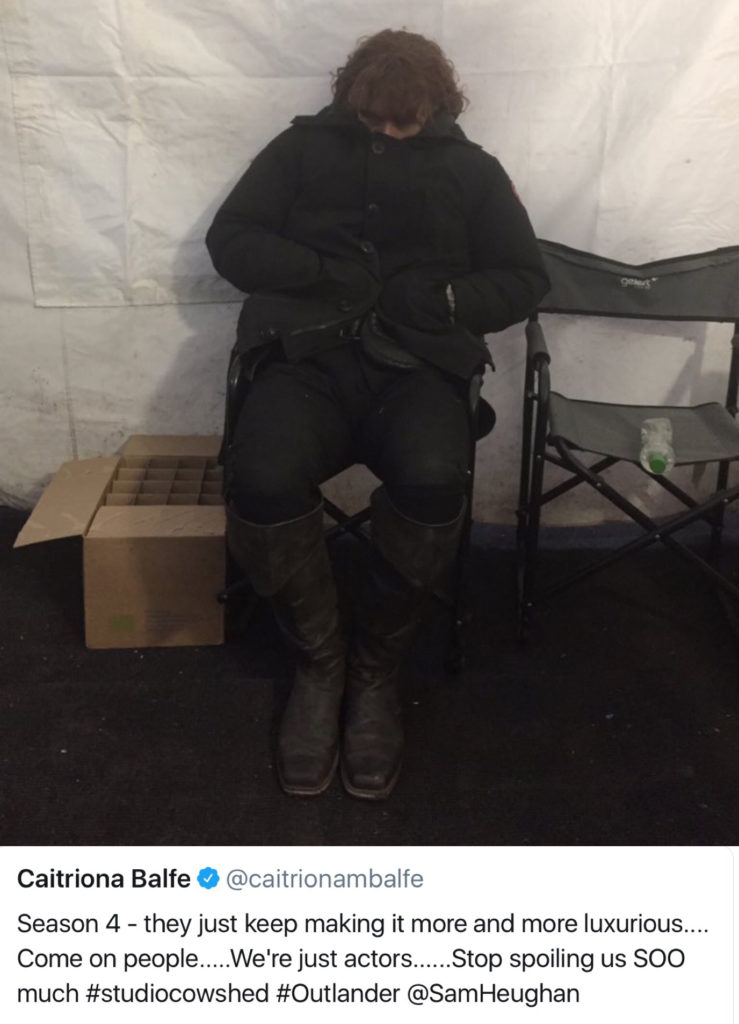 I decided not to do that as we had already been asked to leave. Later I wondered why am I such a law-abiding citizen when all her pics with Sam and Caitriona appeared on social media! And later still I saw that funny tweet from Caitriona from inside that giant barn – looks verra cold indeed! 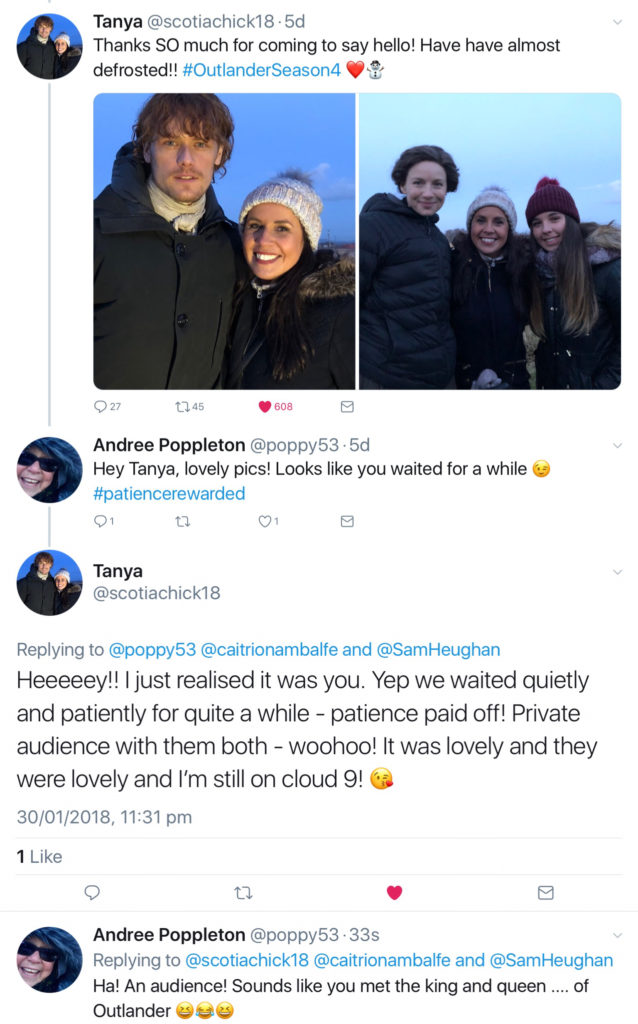 Anyway, I just went to look at another castle, so that was pretty cool. Even though there are castles all over the place here, I find them all fascinating, and they are usually in very beautiful surroundings, too.

So, next day it was off to Cumbernauld Glen, where the filming had been well advertised even in the local media. We joined the many onlookers where filming was underway near the cabin in the forest. It was not too easy to see as we were held well back and there was a lot of tree cover. We could see Caitriona down there, with a number of supporting actors, and it was the usual routine of doing the same scene over and over. Two beautiful horses stood patiently awaiting their cue. 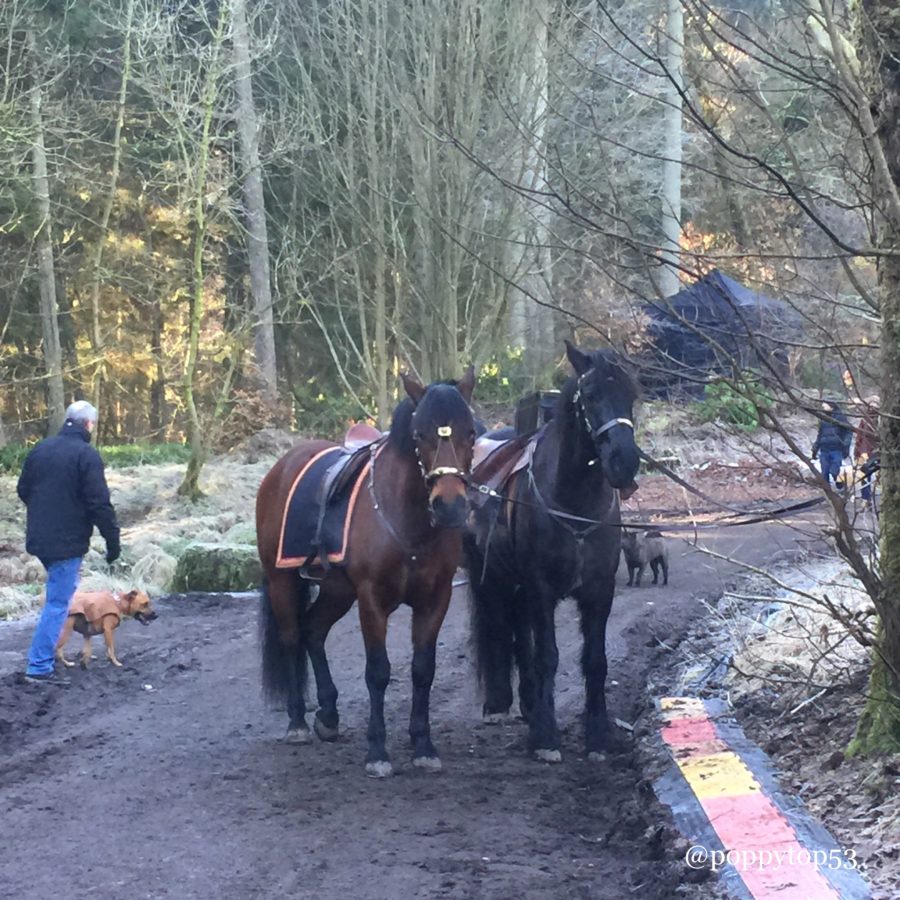 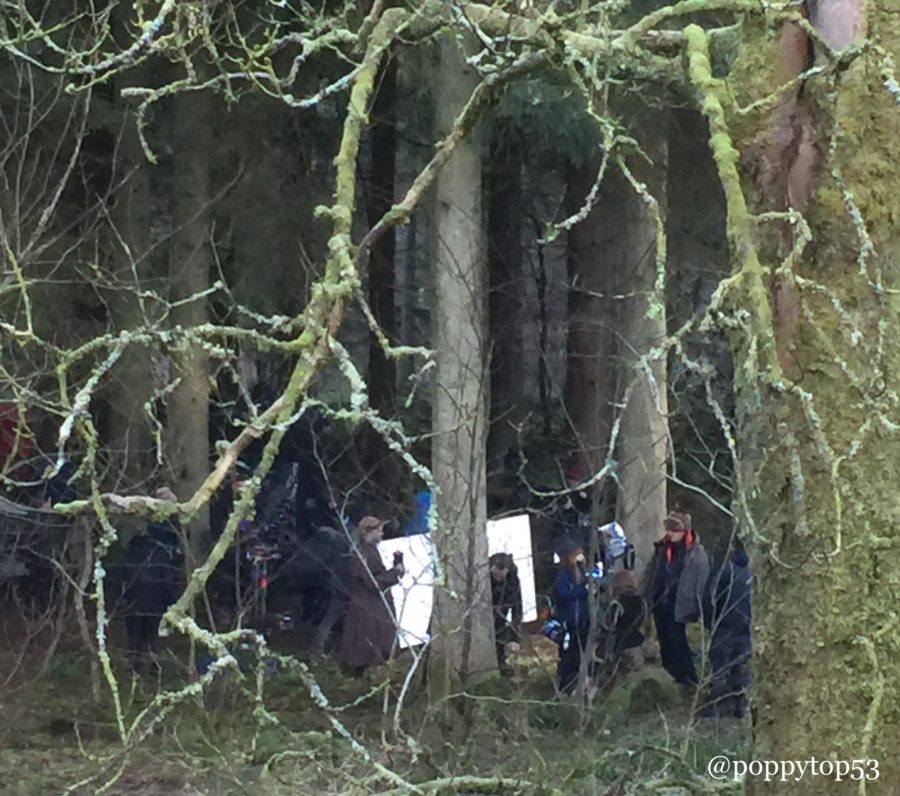 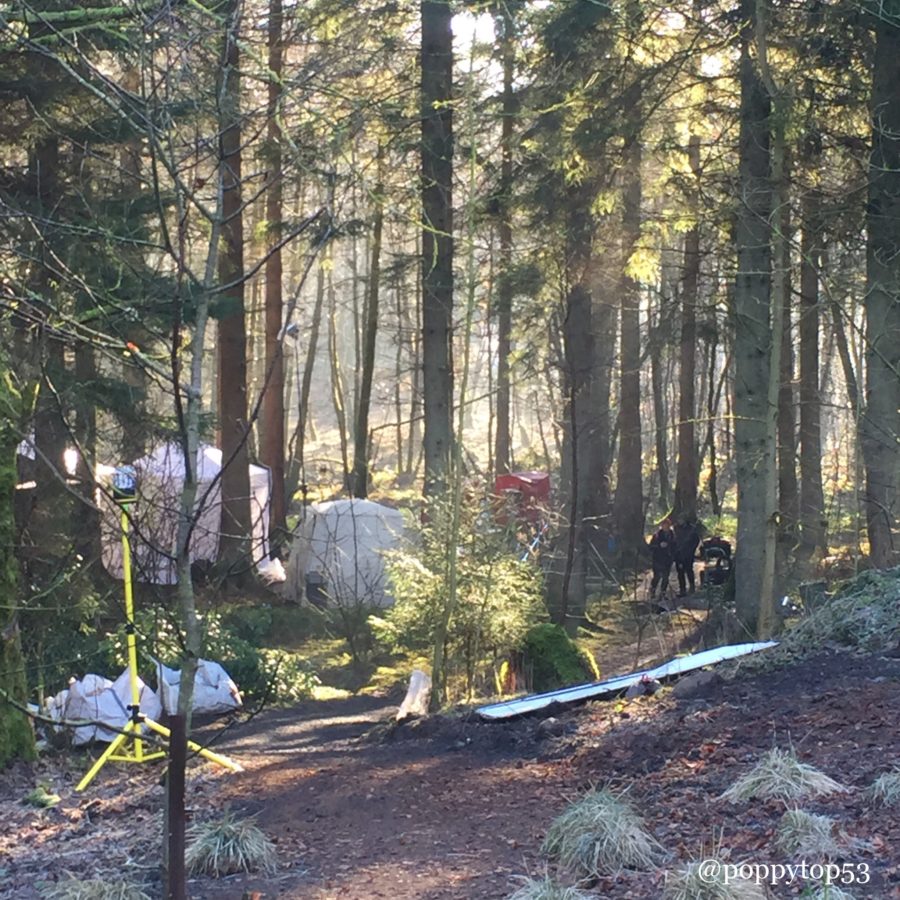 Down by the stream, some cameramen were setting up their cameras in the water. These were hardy men! They were wearing waders and looked prepared to stand in that freezing water for an extended period. Better them than me. It was sunny but bitterly cold, and the whole time we were there the thick frost did not thaw, and our feet were like blocks of ice in the end. 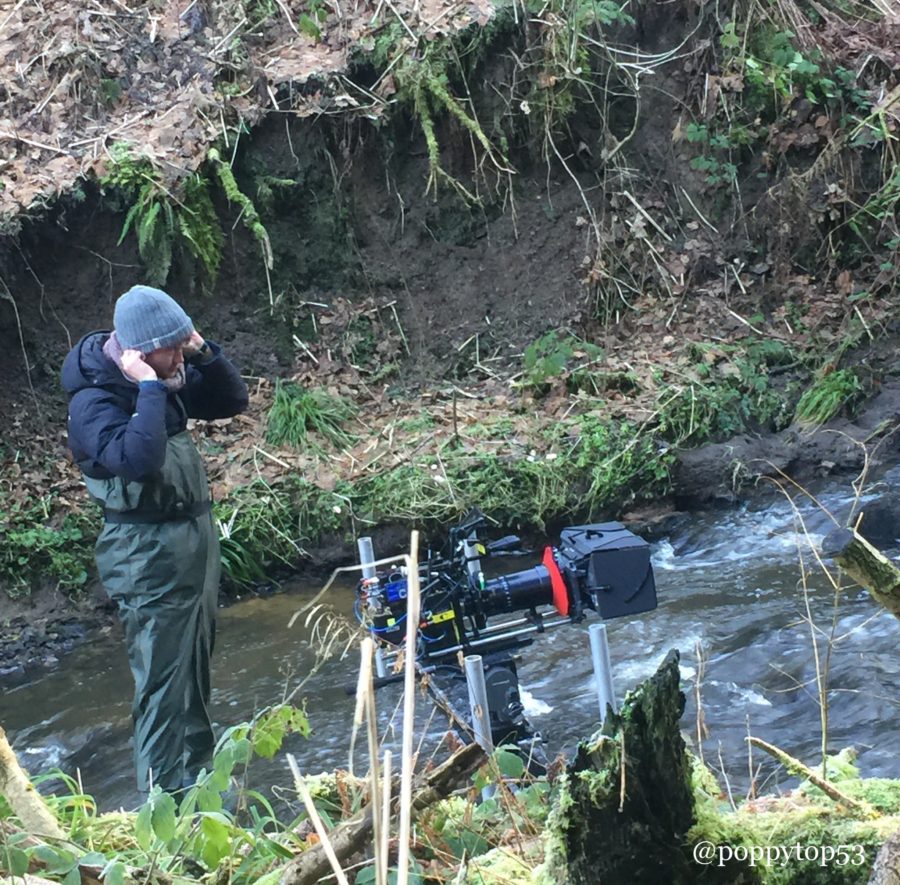 We decided to call it a day and then, of course, so many pictures of fans with Caitriona Balfe started to emerge a couple of hours later on social media. If only we had stayed. Oh well, you win some, you lose some. At least we came away before frostbite had set in! How does she do it? Working for hours in those freezing conditions, and presumably acting as though it is very warm! Gotta admire that. 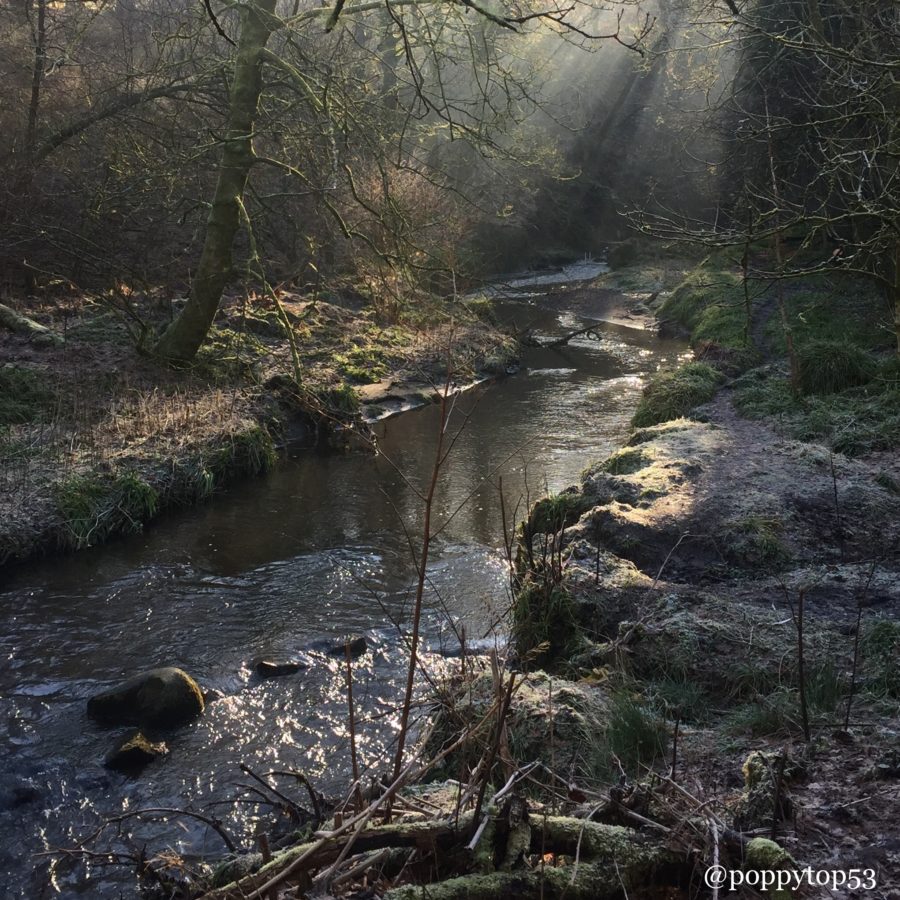 It really is an idyllic setting. Filming was set to continue in that location for three more days, so we made our plans to go back. Over the next couple of days, Caitriona was there, and there were constant rumours that Sam Heughan and maybe Duncan Lacroix would arrive. But that didn’t happen. Rollo was there, and there were scenes with horses and Indians — lots of action and lots of people standing in the cold and mud to get a glimpse!

So, I hope you enjoyed the story and the pictures. I’ve been to a few Outlanderl ocations now and one of the things I found quite difficult this time was the fact that people seemed to want to surge in and mob Caitriona Balfe. Maybe that’s fine on a nice relaxed sunny day perhaps, but it seemed to me that she was working in really gruelling conditions and that it might be nice if fans respected that and gave her some space to head off for lunch, or just to go for a coffee or a pee! Some say it goes with the territory, and when you’re famous that’s all a part of it. What do you think?