(First posted at outlandercast March 2018)
In the usual Outlander way, it was a number of connections across continents that led me to Outlander embroiderer and general all-round costume and stitchery whiz, Liz Boulton. Liz worked in the costume department of Outlander for Seasons 1 through 3 and was there from the beginning when only six people were in the workroom. Those numbers eventually swelled to 75!

I had a chance recently to attend a talk by Liz to the Embroiderers Guild in Glasgow and then sat down for a private conversation with her. Her talk, “Behind the Scenes of Outlander,” was a fascinating mix of the story of Outlander and the ways in which the costume department works to bring the characters to life on our screens. As we all know, the attention to detail is amazing and with Terry Dresbach at the helm, it’s a creative process and the standards are high. Here are the highlights of what I learned from Liz that day about her work as a costuming artist and what it’s like to work onOutlander.

Liz wanted to be a costume designer ever since the time she saw Swan Lake as a child – she was captivated by the costumes of the dancers. But she got waylaid studying science at university and gradually made her way into the world of costume when she participated in university amateur theatre groups. She designed and made costumes for those groups and then became a professional, working in TV, theatre and movies.

She is actually a huge Outlander fan, and way back when the first book was released, her sister, being an embroiderer as well, was attracted by the original UK title, Cross Stitch. Of course she soon found out it had nothing to do with sewing, but by then she was hooked! When Liz heard that her favourite book series was being made into a TV show, and that the studio was literally around the corner from where she lives, she decided that she would really like to be involved with the project. So, she got in touch with the right people and scored herself a position in the costume department.

Liz has worked on many garments for all the seasons so far and gave these special insights into their construction. Not only do they have to make and decorate many garments from scratch, but they also have to alter existing garments and mend rips and tears. They also often need to make several different versions of one garment. Because the scenes are not necessarily shot in sequence, they may have to make versions of a garment to show it progressively deteriorating and getting torn and dirtier, as the characters live out their lives and adventures. The dyeing department works on making the garments look filthy and worn out!

A good example of this is one of Claire’s very early garments, the “shift” she wears going through the stones the first time. They made 12 of these, and then the dye and breakdown process took the new garments to different stages of the transformation from her 1940s belted dress, through to the version after she has ripped the dress to shreds to bandage Jamie!

As another example, they made 15 versions of Jamie’s shirt, and 6 versions of Claire’s bloody WWII apron.

Liz became the “fit model’ for Mrs Fitz’s dress, and she has lost count of how many bum rolls they made. She and her colleague, Fiona, did the quilting on Colum’s banyan, and it shrank during the dyeing process and they had to do it all over again! 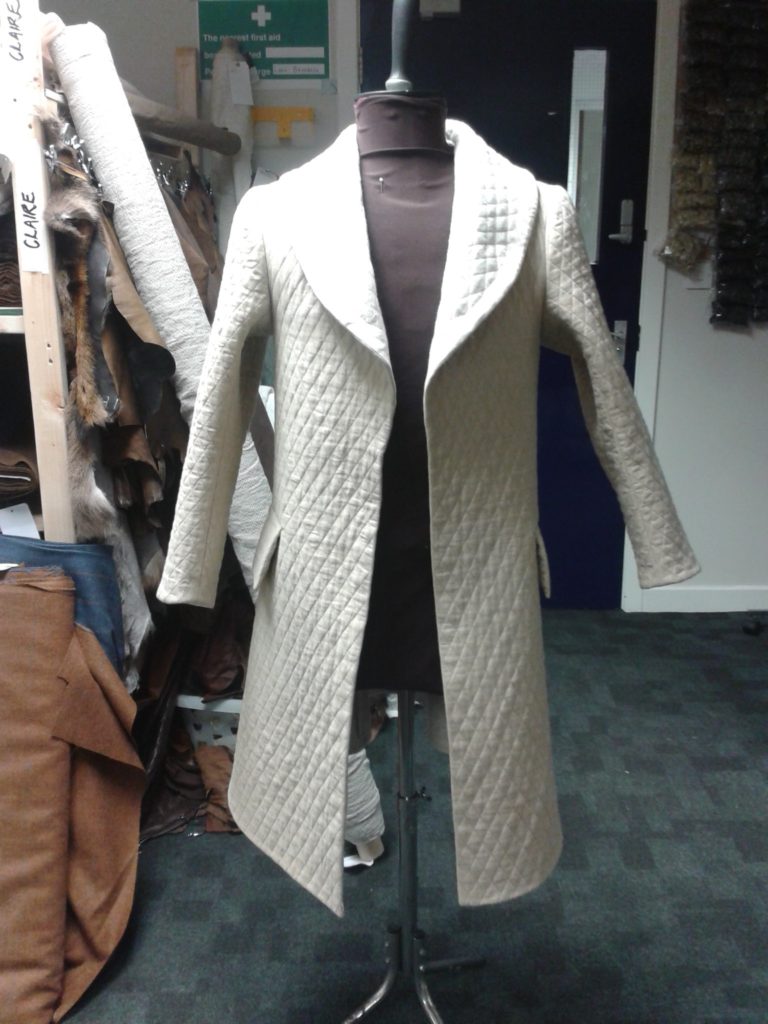 Claire’s wedding dress was a big challenge, and a complex, collaborative, creative process. Liz did the “stomacher” (the decorated triangular panel that fills in the front opening of a woman’s gown or bodice) for the wedding dress. And she incorporated an ‘Easter egg’ into the petticoat (an Easter egg is an intentional inside joke, hidden message or image, or secret feature of a piece of creative work). Terry Dresbach’s dog, Cuilean, was there a lot and as a little nod to him, Liz embroidered a near life-size dog bone into the fabric. 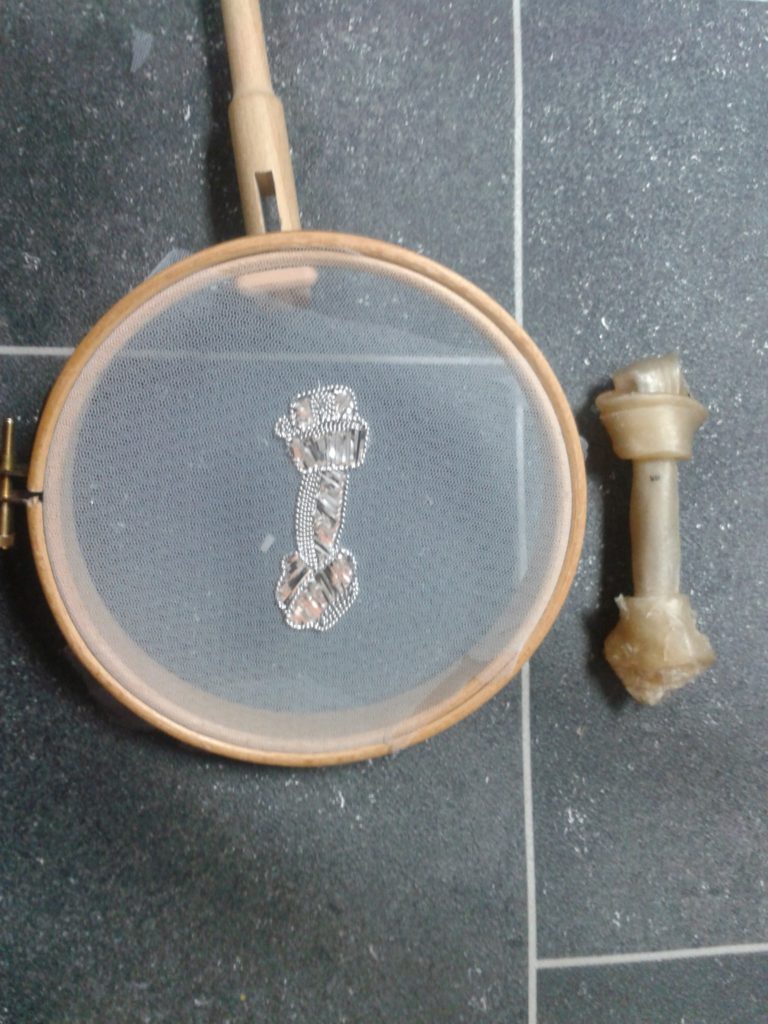 There was a minor crisis in the construction of Geillis Duncan’s pixie-hood jacket. Remember the one she wore when Claire and Geillis are walking in the forest and Claire discovers the fairy changeling? The scene was due to be filmed in three days and the fabric still had not arrived. So they had to use other fabric, and make compromises and creative changes to get the jacket made up on time. 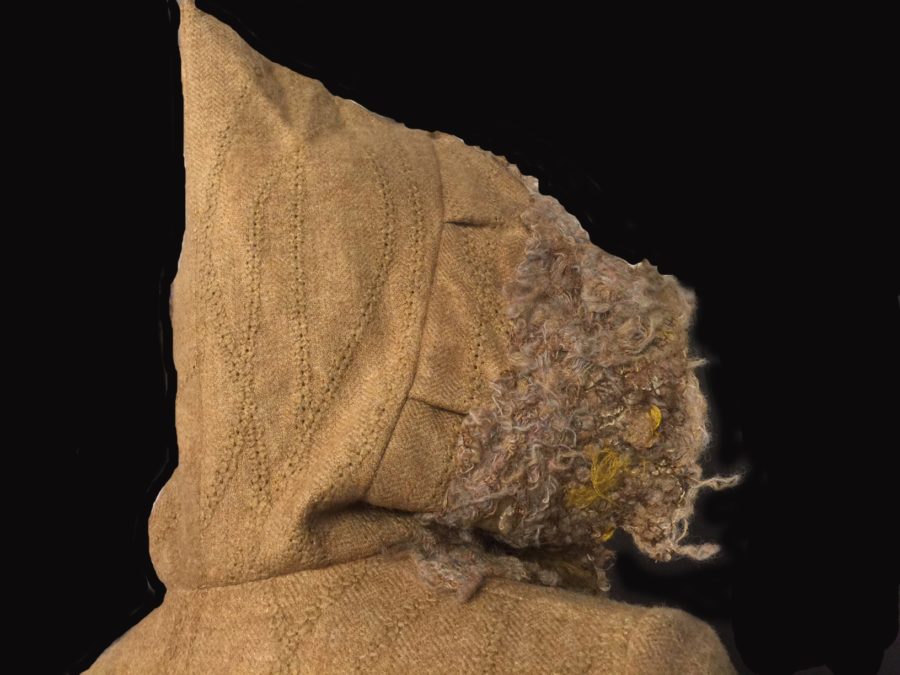 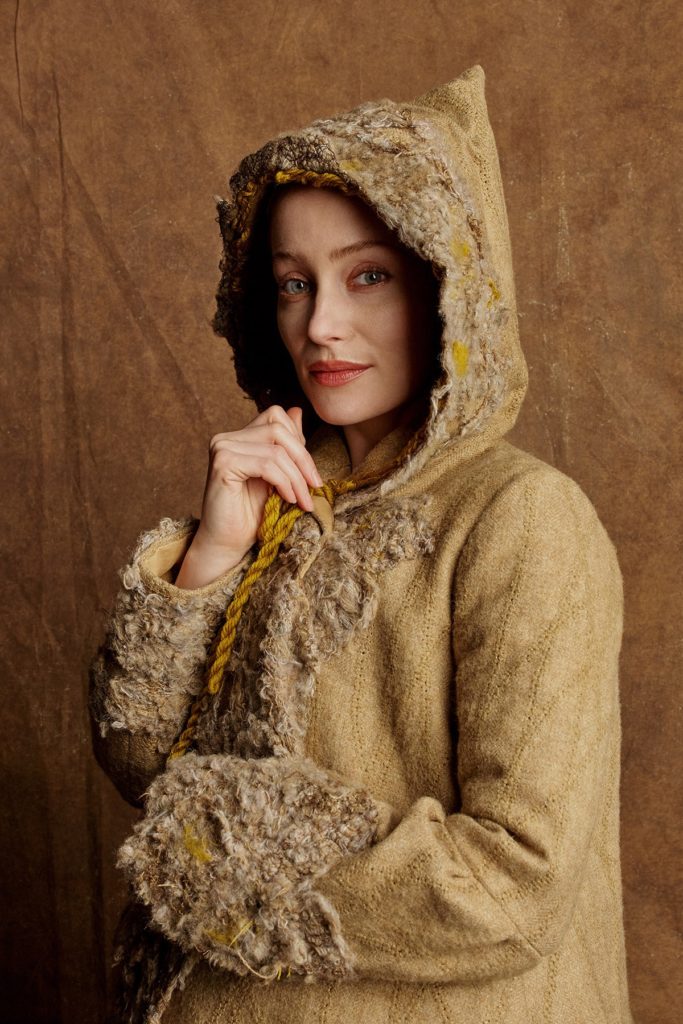 In Season 2, Liz also worked with the set decoration department, and made the Fleur-de-lys designs for the horses’ blankets in Louis’ stables at Versailles, and the Coat of Arms for Louis’ bedhead.

For Louise de Rohan’s turquoise silk dress, the zigzagging to finish the ruffled edging alone took a week to complete. They made matching collars for the monkey, but the monkey would not wear them!

Liz hand embroidered the big flower on the front of the dress that Claire wore in the garden of Versailles, and included an Easter egg for Caitriona Balfe. Since Caitriona is a cat lover, Liz embroidered a tiny cat’s paw print into the garment as a nod to Caitriona’s cat, Eddie. 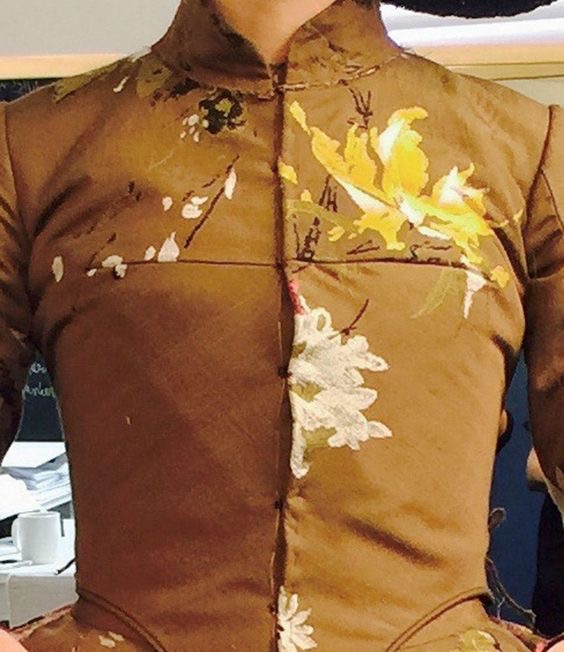 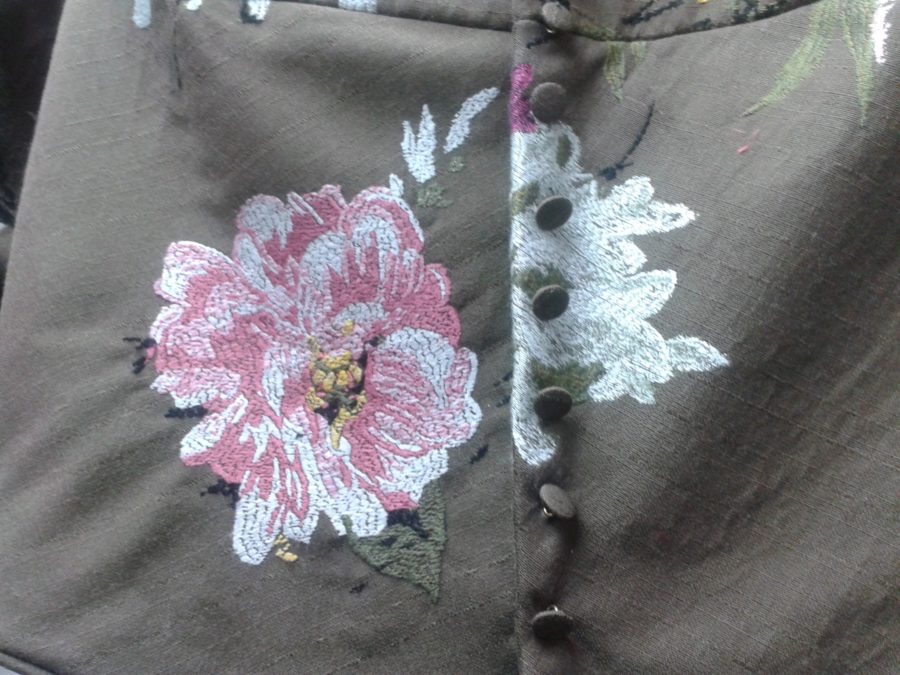 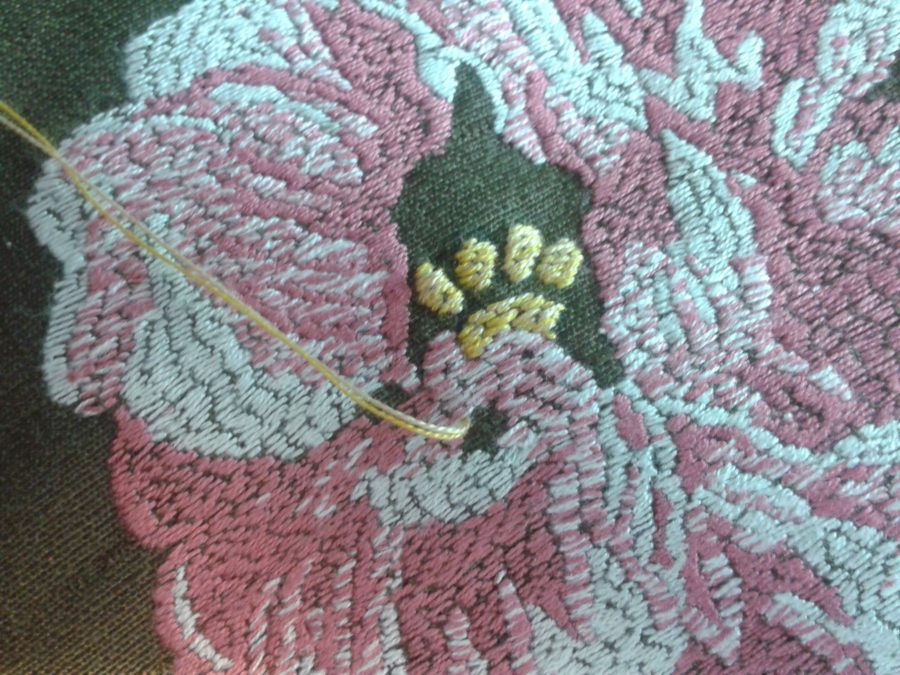 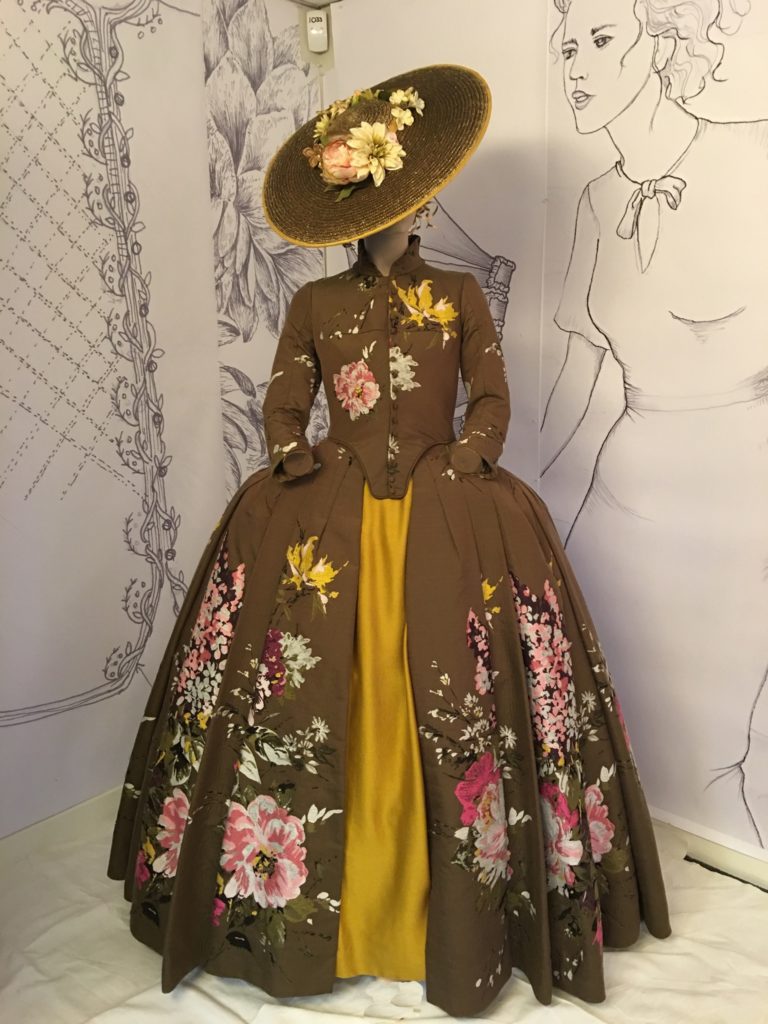 The garment that Liz most enjoyed working on was Master Raymond’s jacket. She was given a brief to research 18thcentury diseases that might be able to be cured or relieved by an apothecary of that time. She found several, including yellow fever and gout, and incorporated these into the design as well as the hand of knowledge and the tree of life. 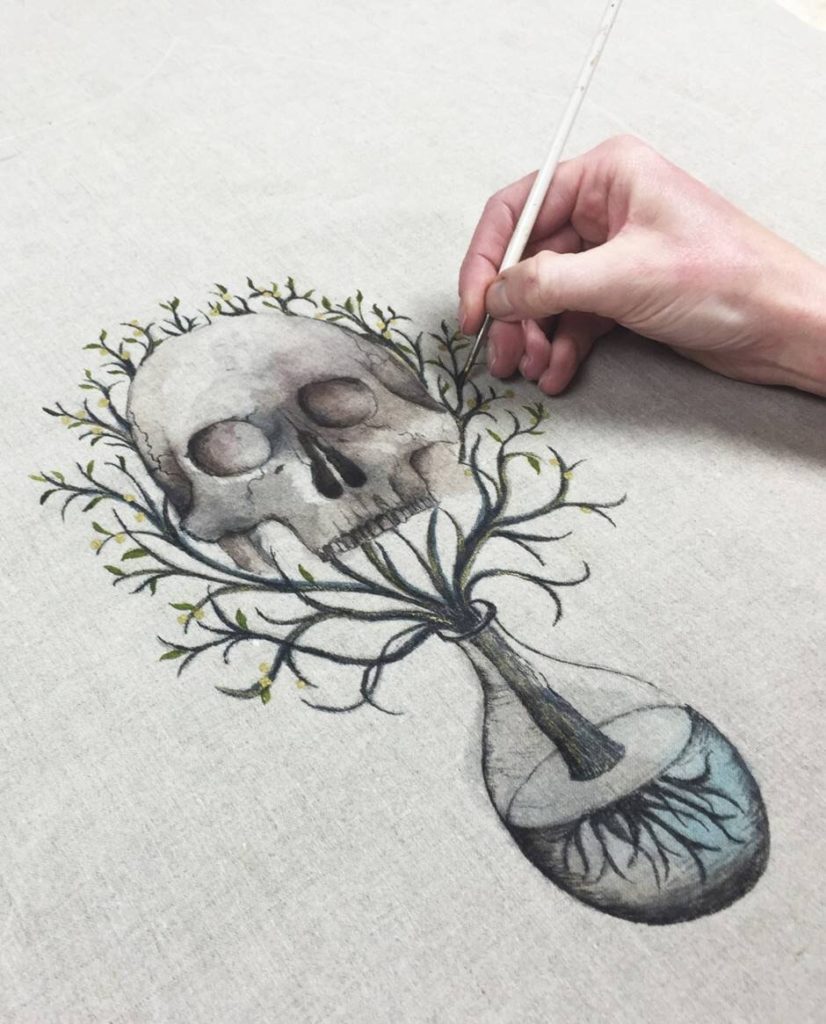 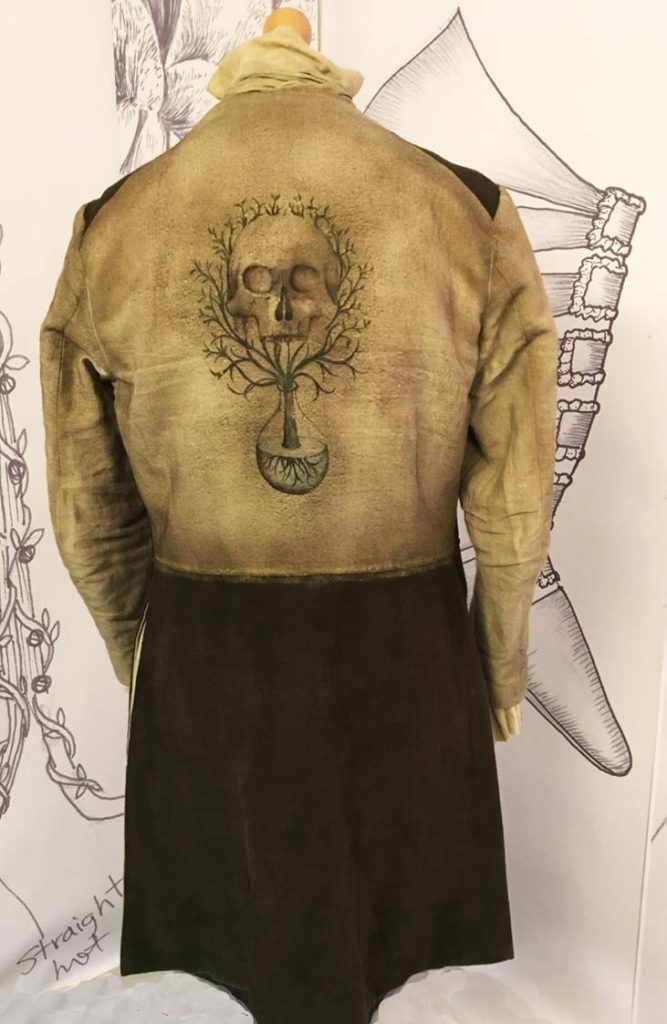 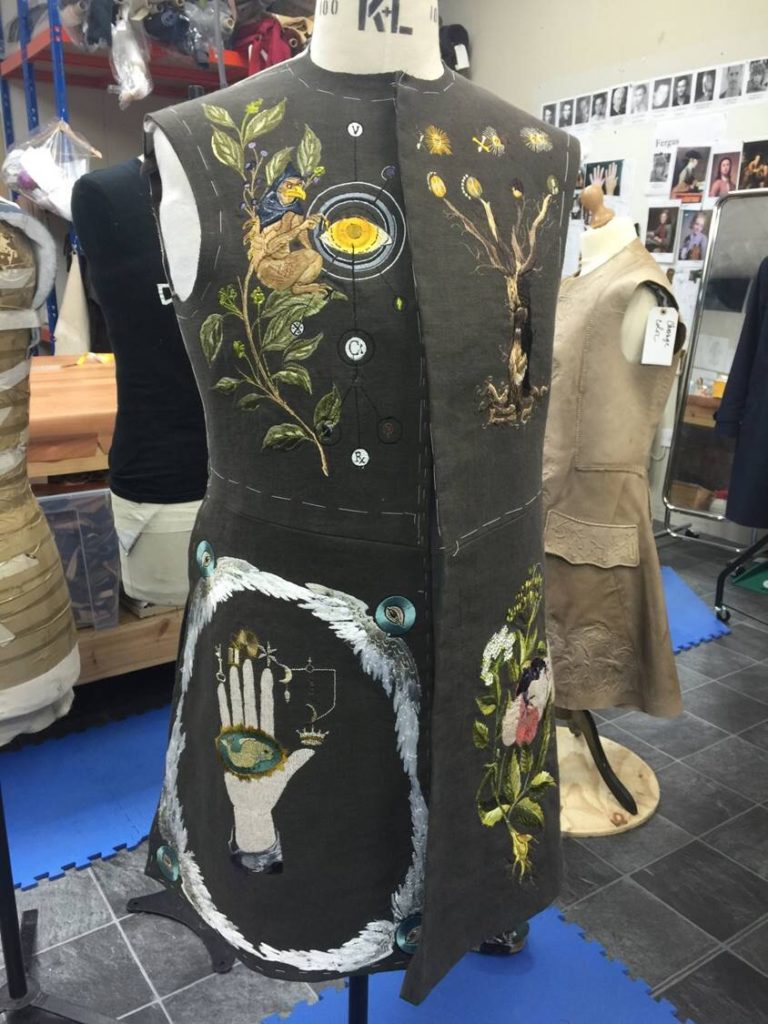 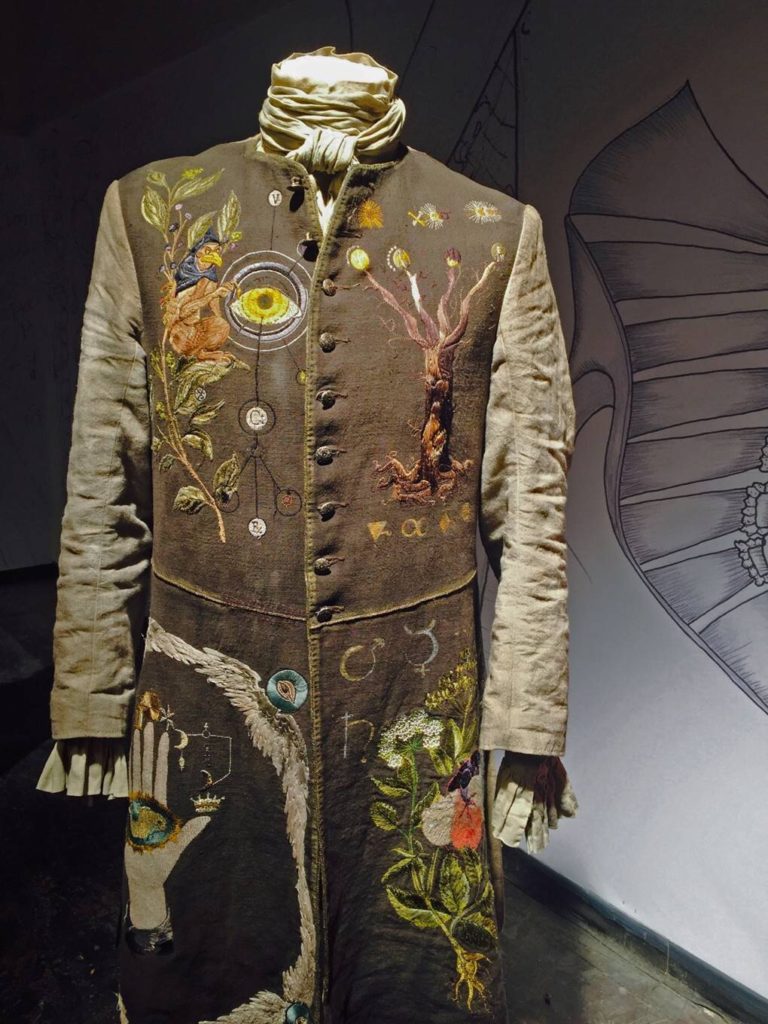 In this hooded jacket, the embroidered design was of leaves taken from the weave of the fabric. Liz added a strawberry for the Frasers. 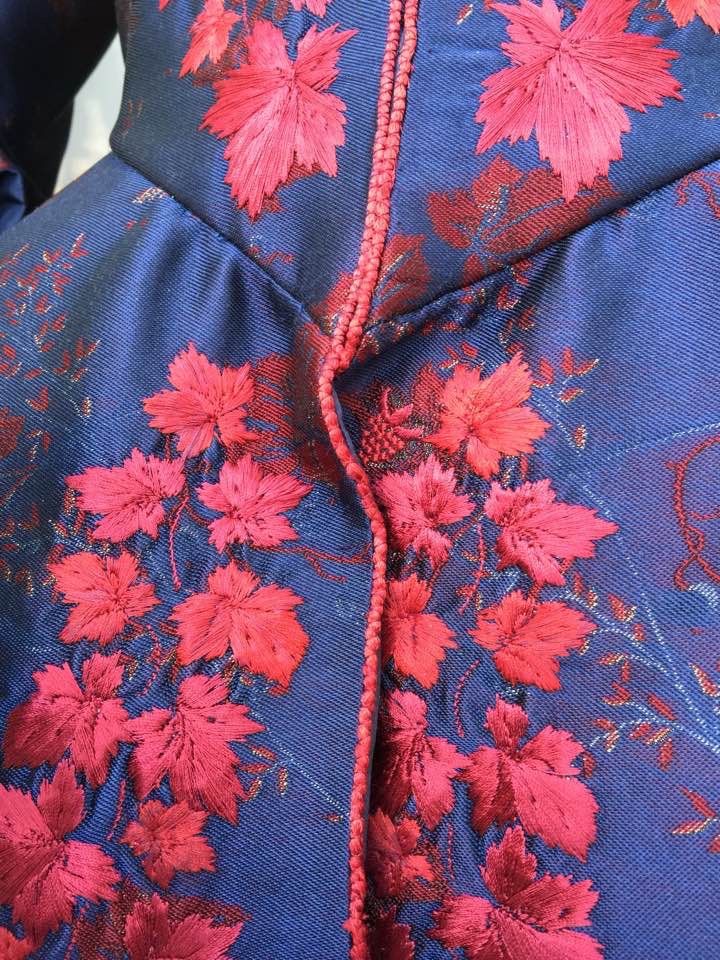 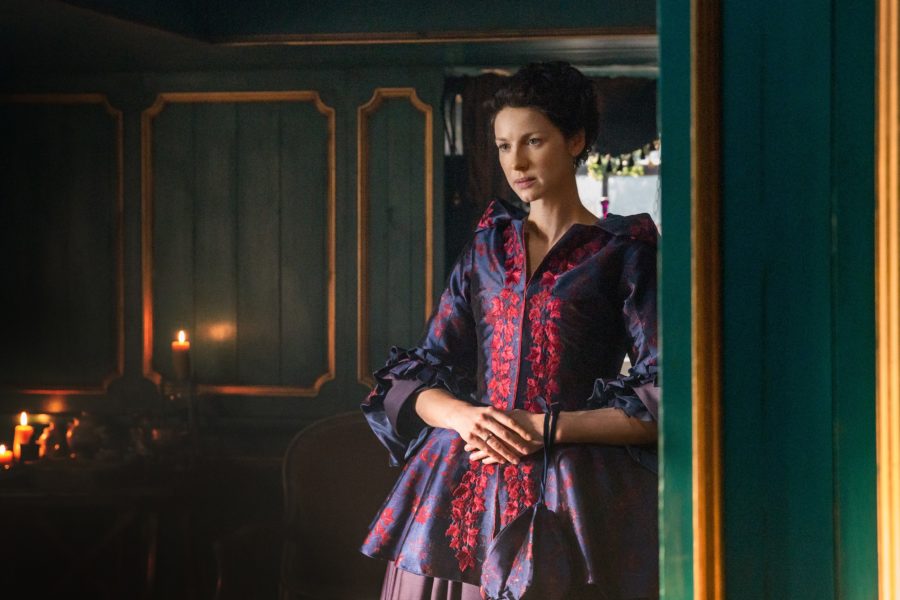 One of the costume challenges for Season 3 was that Laura Donnelly (Jenny Murray) was pregnant (in real life) and was due to give birth before the filming started, so they did not really know what her measurements were going to be in order to design her outfits. 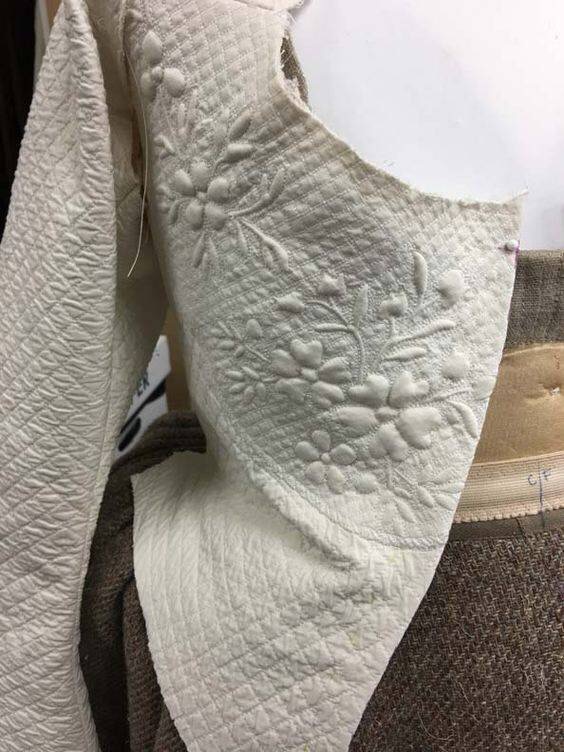 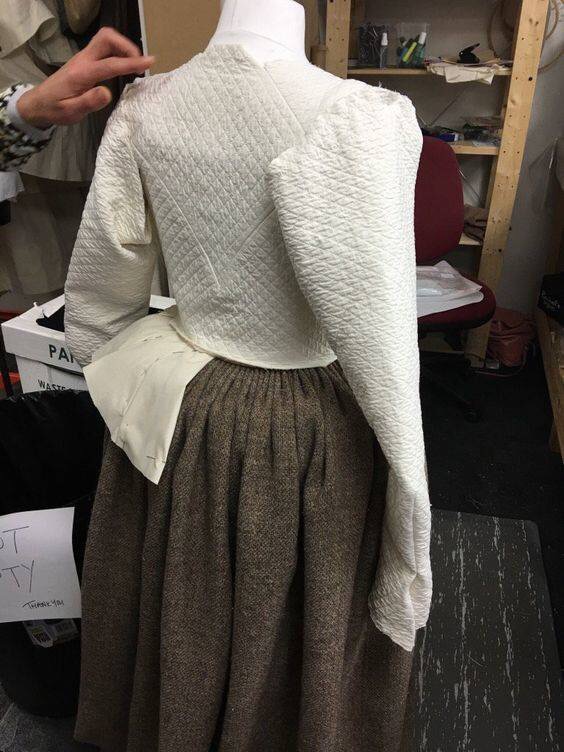 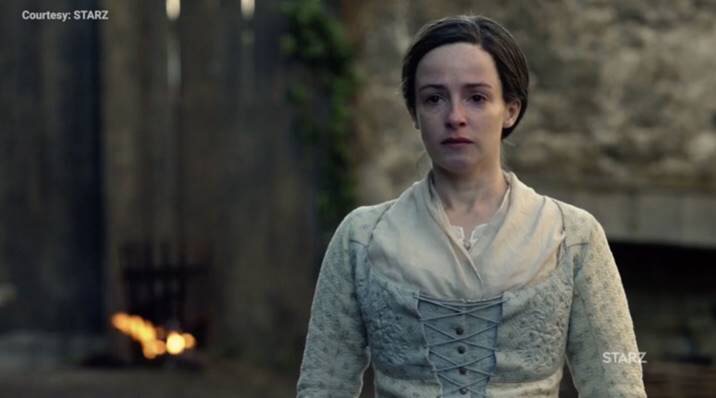 Season 3 brought some new directions due to the 20-year gap that elapsed since Season 2. Terry Dresbach wanted to reflect the realities of the times, as times were hard at Lallybroch and the clothing should show that hardship. Clothes that Claire and Jamie wore 20 years earlier in Paris should appear faded now, and could be remodeled, as would have happened in those days when people kept their clothing for a lifetime. Also, Marsali got Claire’s hand-me-downs, so the green cloak and one of Claire’s earlier dresses were remodeled for Marsali to wear. 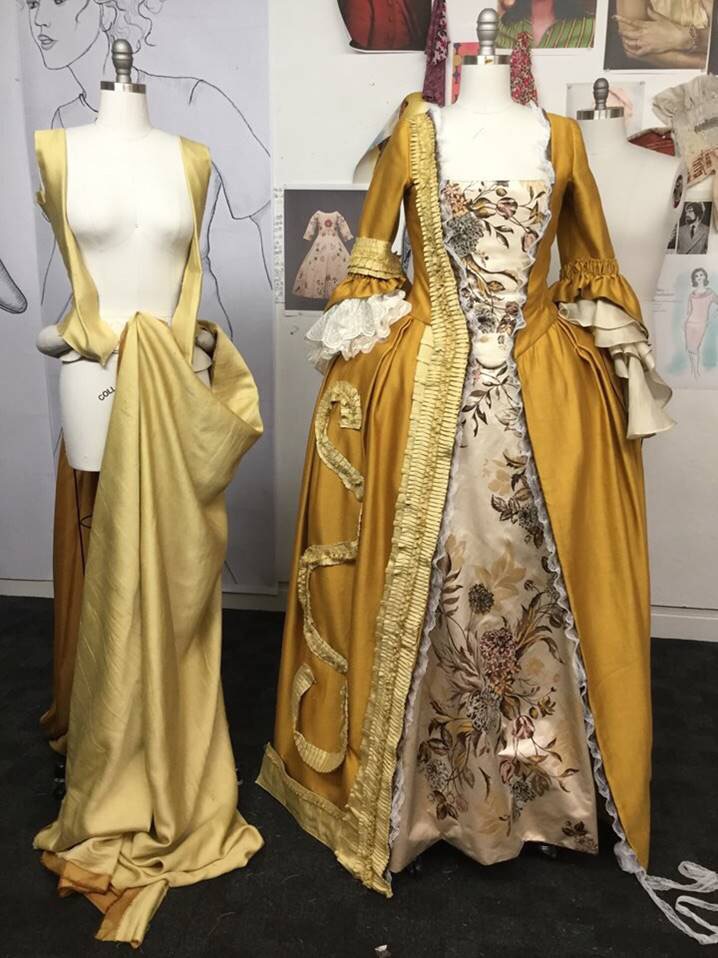 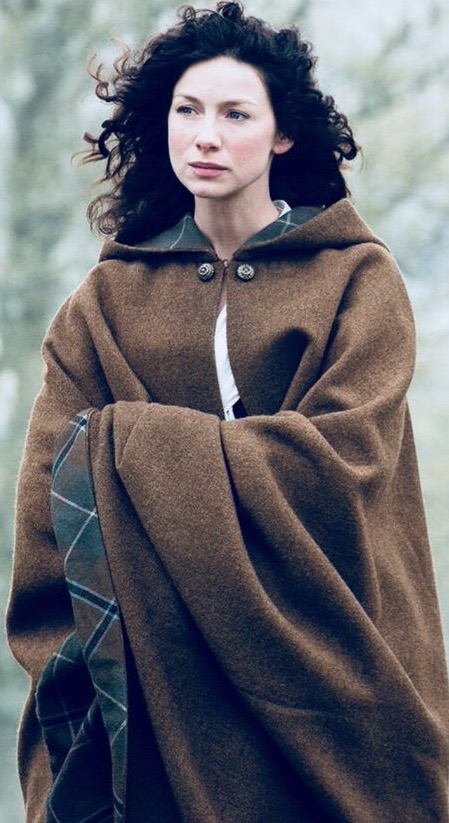 Terry wanted Fergus to have a lovely scarf for his wedding. Liz embroidered a repeat pattern on Fergus’ scarf and added a thistle motif to represent Marsali and a fleur-de-lys to represent Fergus. Such beautiful details, which we viewers may not be able to fully appreciate. On Marasli’s fichus (a large, triangular kerchief worn by women to fill in the low neckline of a bodice), Liz incorporated a couple of little Easter eggs – F&M and M loves F.

Working in the Outlandercostume department, Liz says, meant long hours working sometimes under a lot of pressure to meet deadlines and coping with the unexpected. Improvisation and compromise were often called for.

She recalls fun times too. It was often a source of amusement because she was an Outlanderbook reader and knew the story lines and what was coming. Her coworkers found it hard to believe that there were zombies and pirates coming up in Season 3. Liz even had a few samples that she had been working on to be used in Season 4, but these were top secret! 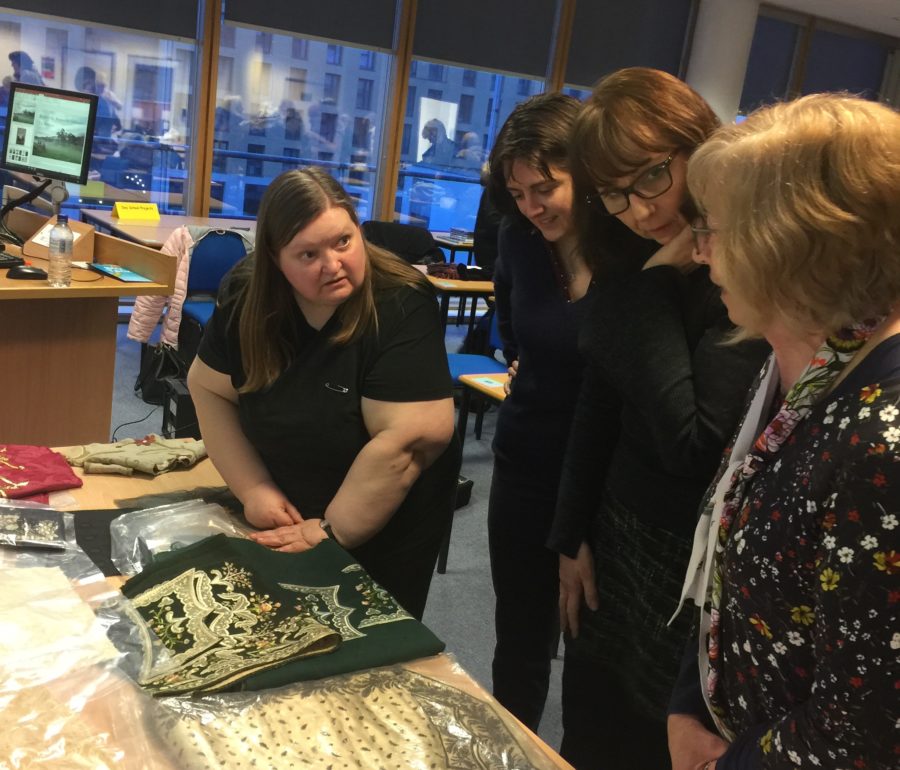 Liz Boulton (left) discusses the fabrics with our Outlander friends who also attended the talk. Next to Liz is Séverine Peyrichou, from Outlandish UK, Outlandish Bakers &  the French Outlander group, Chardon & Tartan_Sur Nos Ecrans and next to her is Mags Lang from Outlandish UK.

Thank you for the time, Liz! It was a pleasure to listen to the talk, and speak with you about your work on Outlander.

Which was your favourite Outlander outfit so far?
If you could ask a question about it what would you ask?