(First posted at outlandercast November 2017)
When people criticise social media for ruining our ability to relate to each other, I say ‘No!’ Social media has given me a whole new and different set of relationships (like with you, the reader, ye’ ken?) For me it actually started in the early days of the internet. I made friends with an American woman through a common interest, and we kept up the friendship, even though it was more than 10 years before we met face to face. I’m about to go for my second visit with her and her delightful husband in Massachusetts this coming Christmas.

Social media is also bringing you this little story of a chilly Scottish day in the deep dark woods, a long way from anywhere. Read on, I promise this is related to Outlander…

You may have heard of my Scottish gap year? Well, its quite hilarious to me that a lot of the info I get about what’s going on in Scotland comes from two Americans! Anne Gavin, who you know as a senior writer and news editor for Outlander Cast, has Scottish friends and she relays all sorts of juicy tidbits to me that range from events going on at the end of my street, to the locations of Outlander filming. The other is Crafty Christine Lewis, an Outlander Cast Clan Gathering member (who you may know from Outlander Cast’s San Diego ComiCon Street Squad, and our adventures at the Blackpool Fan Convention), also has Scottish pals and keeps her finger firmly on the Outlander pulse around the globe.

So, my social media channels were running very hot a few days ago with speculation about Outlander filming locations. Crafty’s friend lives close to where they filmed last week at Newhailes House, near Edinburgh. You may remember the adoring fan post by Cynthia Beaman Schultz that popped up in the Clan Gathering that day. I missed that event, but then, Anne’s friend, Ian, came through with the goods big time. Ian was walking his dog in his local park and just happened across the Outlander team preparing the location for filming.

Here’s the tantalizing pics he sent to Anne, she sent them to me and I got right on to it. She put us in touch, and Ian sent me everything from maps with coordinates to hand-drawn diagrams. I couldn’t miss it. Could this be Fraser’s Ridge, perhaps? 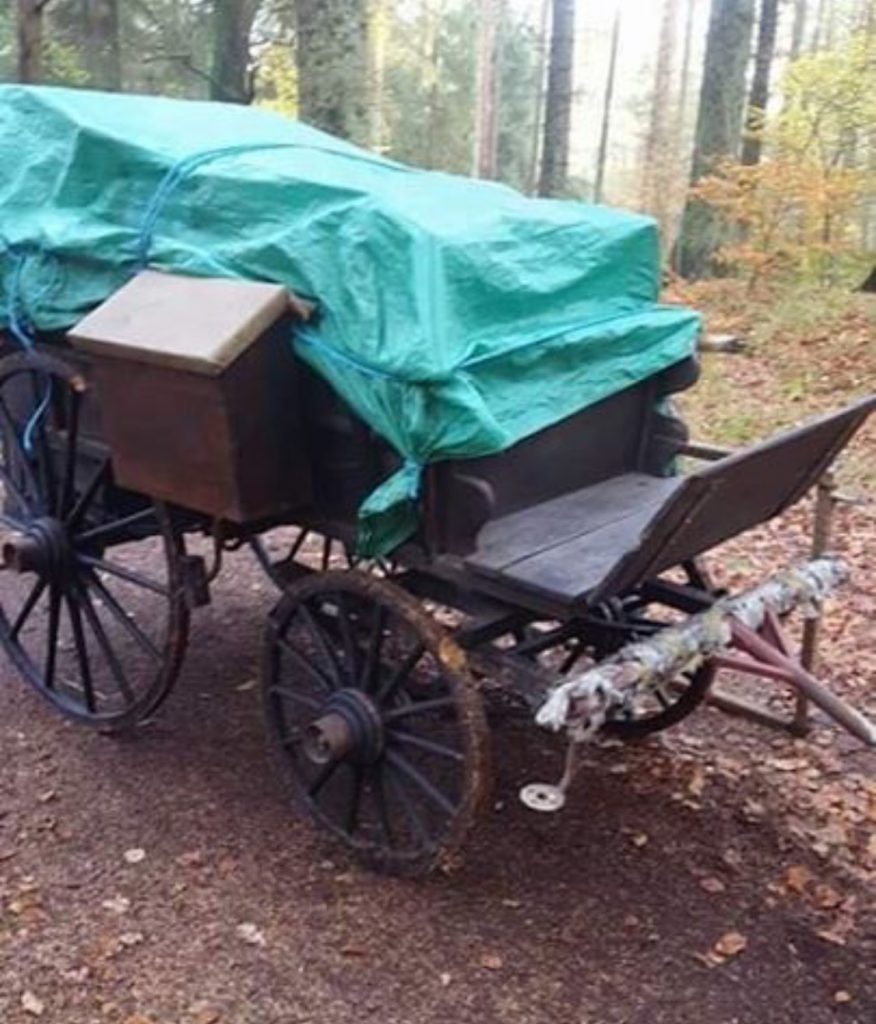 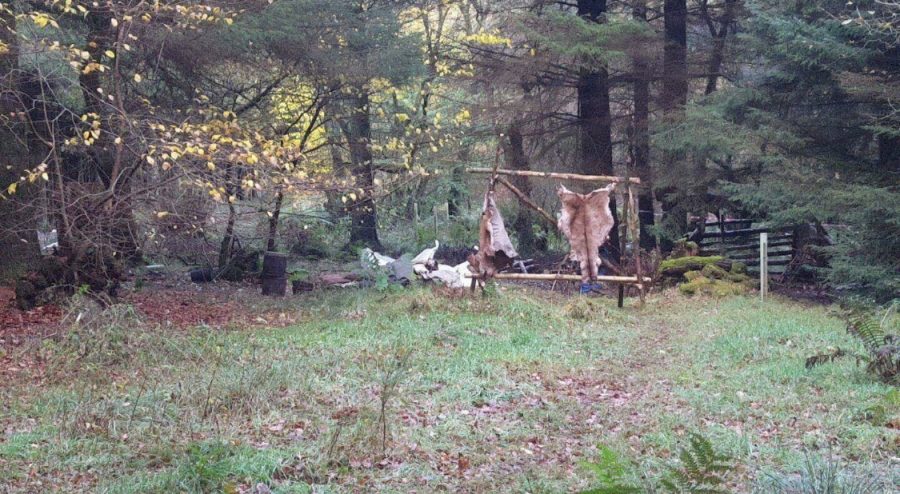 (Side note—Ian lives at Linlithgow, and you may recall that the Linlithgow Palace was used as a location in Outlander series one – it was the exterior of Wentworth prison and also some interior scenes.)

The place to go was Beecraigs Country Park (what a cool name, eh?) just outside Linlithgow. These country parks are everywhere in Scotland, they are huge public access areas with a mixture of environments—open fields, woodlands, gardens, usually a loch and a visitor center—and are home to a plethora of wildlife, including swans, deer, foxes, etc. Oh, and there’s usually a castle or a stately home, too. Outlander uses a lot of these parks for both the environments and the buildings—Pollok Park (the Jamie/BJR duel), Hopetoun House (home of the Duke of Sandringham) and Dean Castle (home of the Old Fox), to name a few. 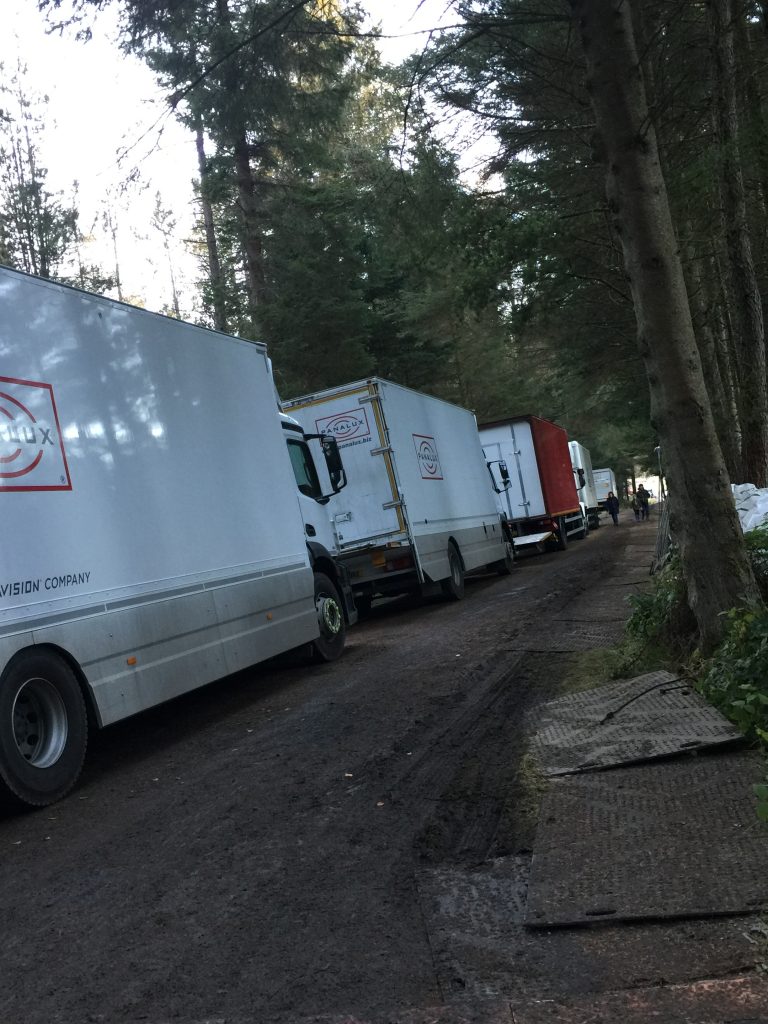 I spotted the Movie Maker vans a mile off, but my feeling of success was short-lived. I was told by crew that they were working on a public road and there was too much rigging, so it was a health and safety issue for me to be there. I was ‘escorted’ (a pleasant, chatty form of frog-marching) through the encampment and shuffled back out to the car park from whence I came. But during this escorted walk, I spotted Caitriona Balfe’s make-up artist, Anita Anderson, as well as a lovely furry character just sitting there with his handler, relaxed and waiting for his cue, I guess. Yes, you guessed it—Rollo! 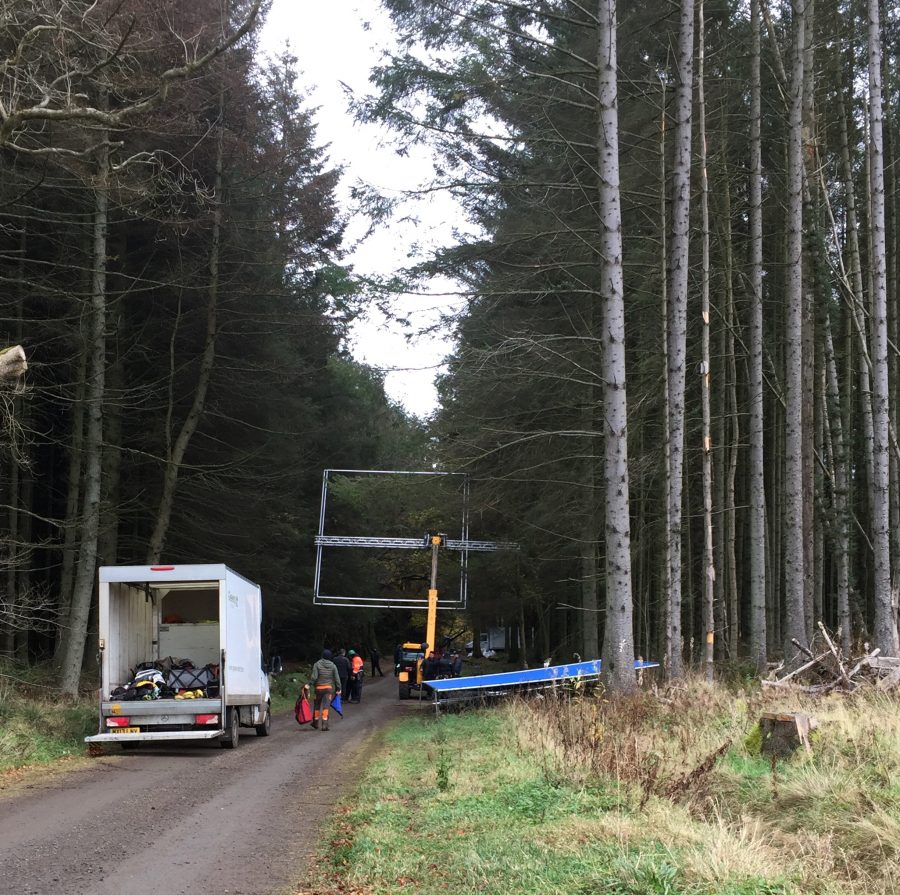 Not daunted, I asked a crew member if there was any other place to watch, and she suggested I go to the other side of the park and make my approach that way. Well, I did that and came at first upon a security man who said I had just missed all the action and if only I had’ve been there five minutes ago! Gaaaah! I teased him that he was getting way too much pleasure out of telling me that. We had a few good laughs together.

But with my ‘never say die’ attitude, instead of going back to my car, I decided to try a little cross country hike. There are paths everywhere in this park, and also people everywhere, local folks walking their dogs. So, I was able to ask a lot of people what they had seen and where the action might be. 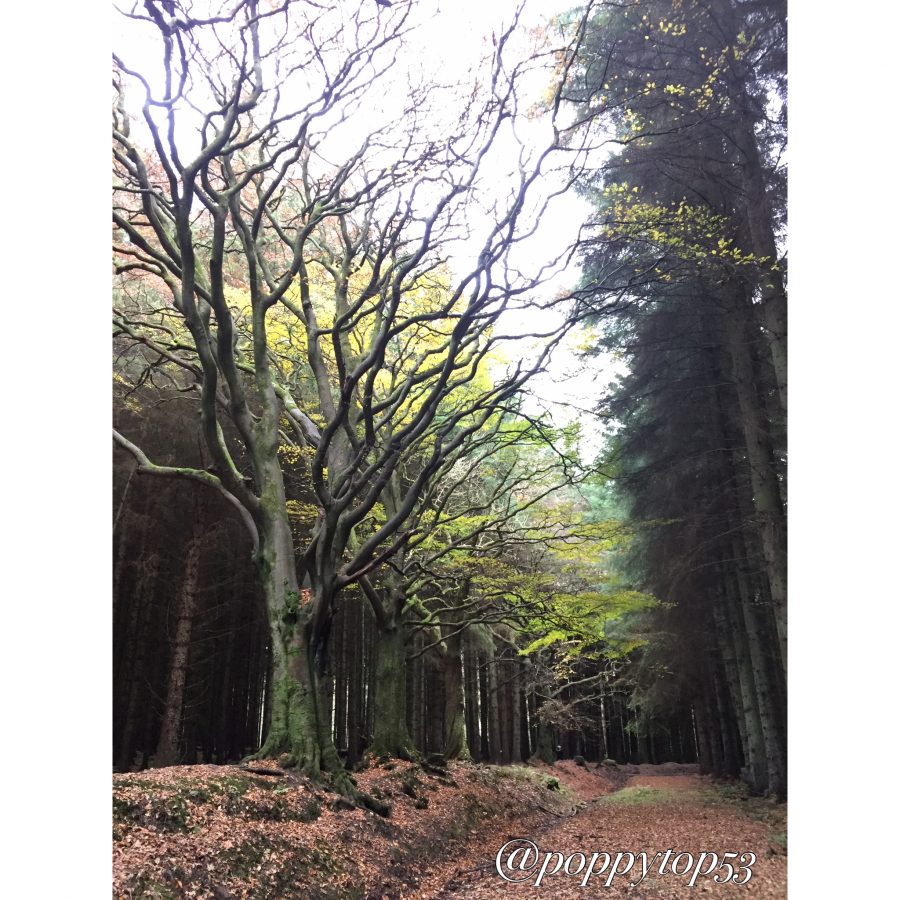 I finally came upon a road where off in the distance I saw people and horses—a eureka moment. Closer and closer… and there was the same woman who had given me the suggestion to try the other way. I’m gonna call her ‘Beanie Gal’ and you’ll see why from the pictures. She agreed that I could stay and watch as long as I would hide with her and the ‘Leaf Guy’ and not take any pictures while the filming was going on. It was the Leaf Guy’s job to run up between takes and spread more autumn leaves on the path. Can I have his job? Beats sitting in an office all day! 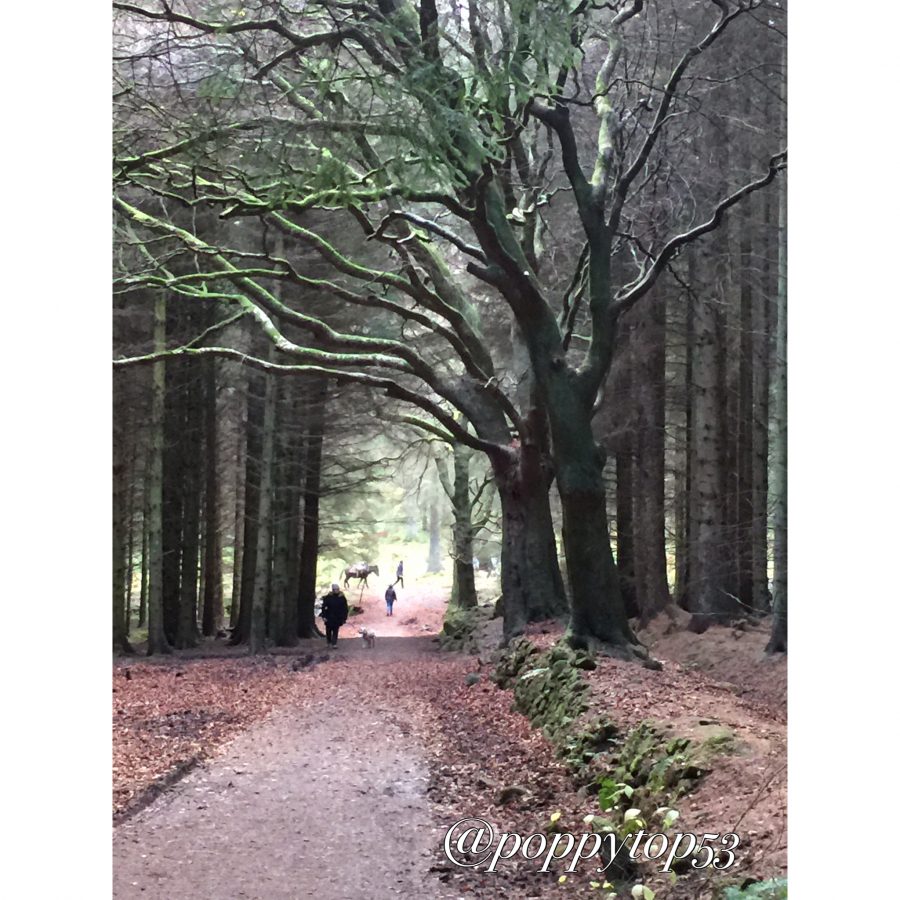 Beanie Gal said it was very important that I do nothing to attract attention or cause distraction to the actors or the horses, or the shot could be ruined. I soon saw that they were shooting a scene where Jamie and Claire are riding quietly down a road chatting away and leading a mule—it wasn’t actually a mule (would there be any mules in Scotland?), but I think it might be their version of Clarence.

Here are some pictures I took—sorry, low light and forest-like conditions—and they are all of Sam Heughan and Caitriona Balfe returning to their starting point for the scene.  This, of course, was played out over and over again. During the filming, we had to go way back into the forest and hide behind trees, (thanks Morag and Sandy for lending me the binoculars!) and when they were heading back we could come out into the open and I could take some pictures. 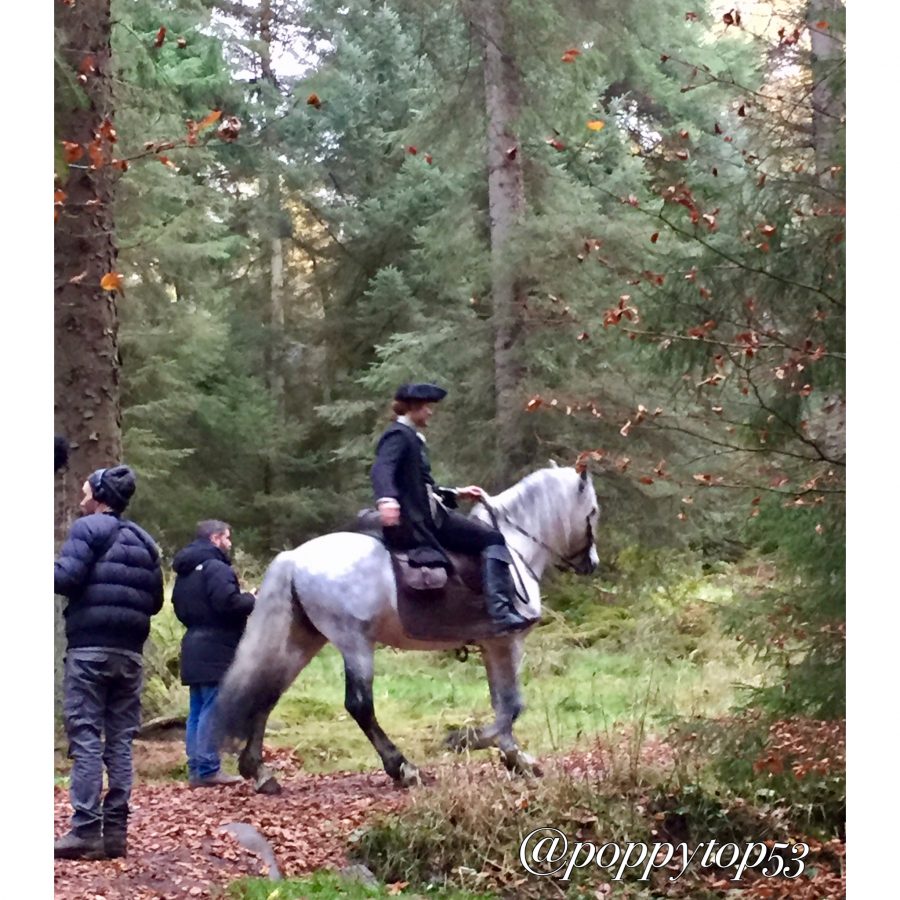 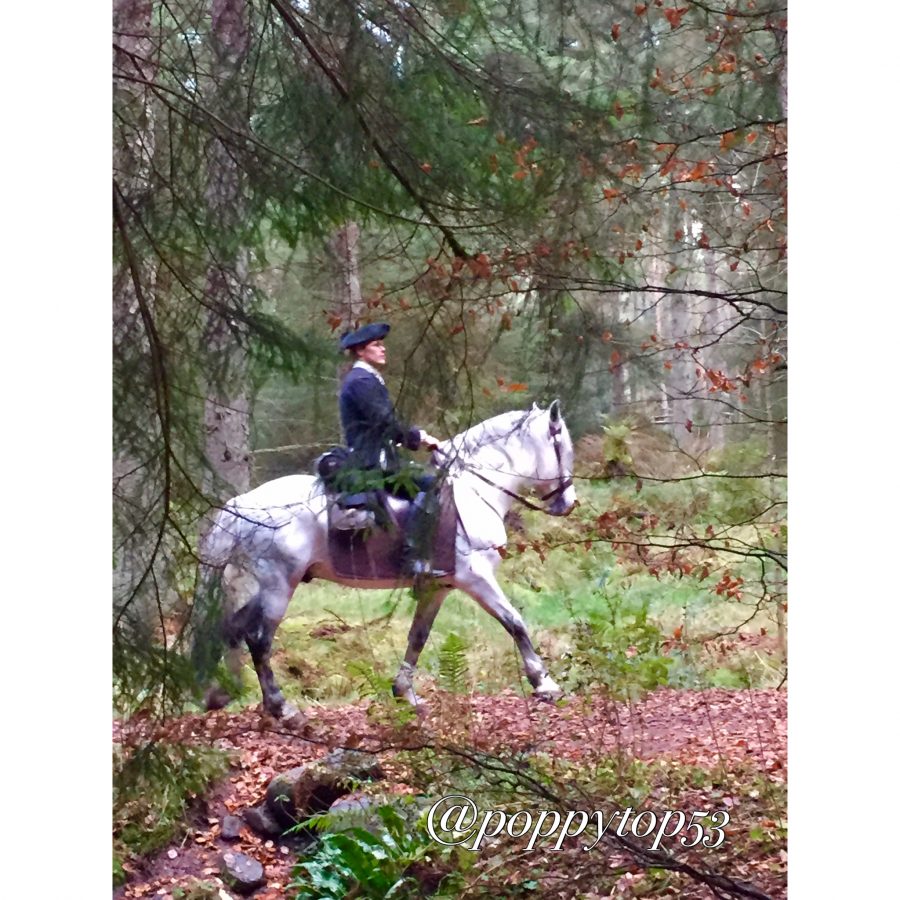 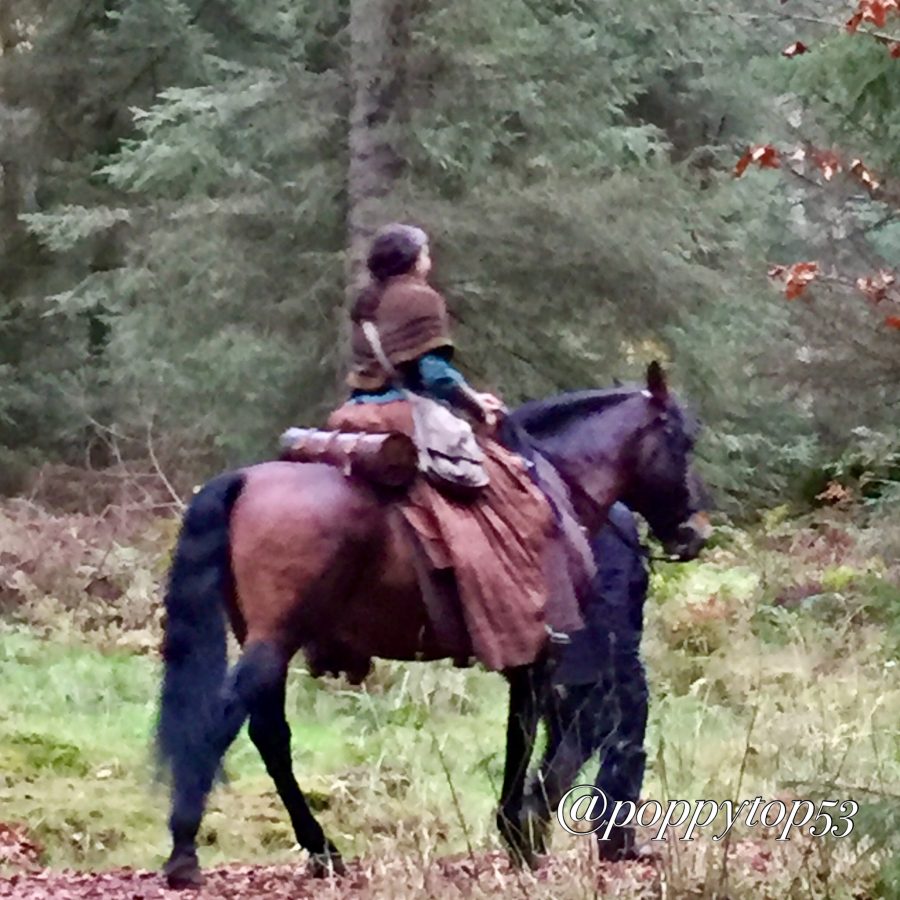 I was really impressed with Heughan and Balfe’s relaxed and confident horse riding. We, of course, see them riding a lot in the show, but to see them just riding along as natural as anything was really something. This little video I shot was them just taking off and trotting back to the start; they weren’t being filmed there, just totally relaxed and riding side by side. Heughan was riding a rather magnificent grey (Will it be Gideon? Gideon was a bay stallion in the books I think, but who cares about that?!) with a really high-stepping, prancing trot. Was Balfe riding the faithful Travis? Not sure. The bay she was riding looked smaller than Travis (the horse she rode in Season 1).

In that video, you can also see Beanie Gal and Leaf Guy getting ready for their between takes activities. Beanie Gal was in radio contact with her colleagues and often listening and talking to them between takes. She was responsible for yelling out ‘stand by,’ ‘rolling,’ and ‘cut!’ 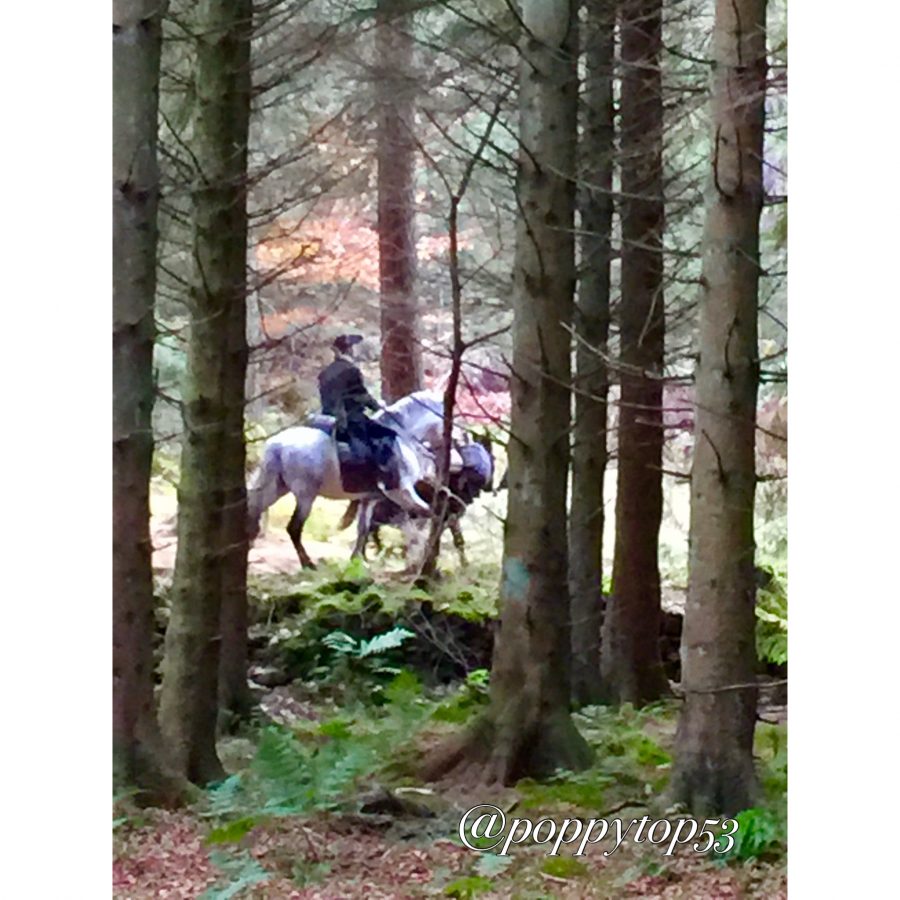 The action cranked up a notch when they were going for a long shot of Claire and Jamie meandering down the path on their horses. A lot more crew members came down, as well as the director, I guess, as he was telling everyone what to do and watching the action through a monitor. They only did a couple of takes of this and then lunch time was called, at which point Sam and Caitriona dismounted, thanked the crew warmly and hopped into their waiting cars. 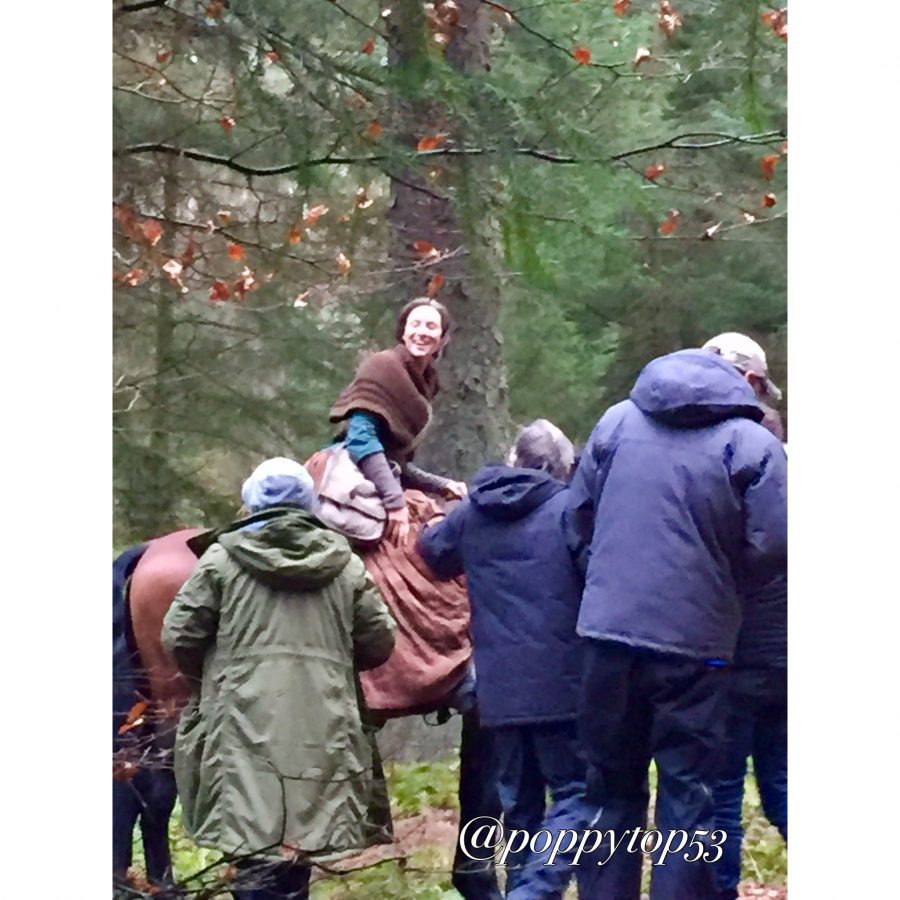 Everyone just started drifting away—Beanie Gal and Leaf Guy walked up the path, and that was my cue. I was cold and slightly damp but quite pleased with my day’s activities, so I shifted myself back through the forest and on to the visitor centre for hot coffee and something chocolatey. Yum! 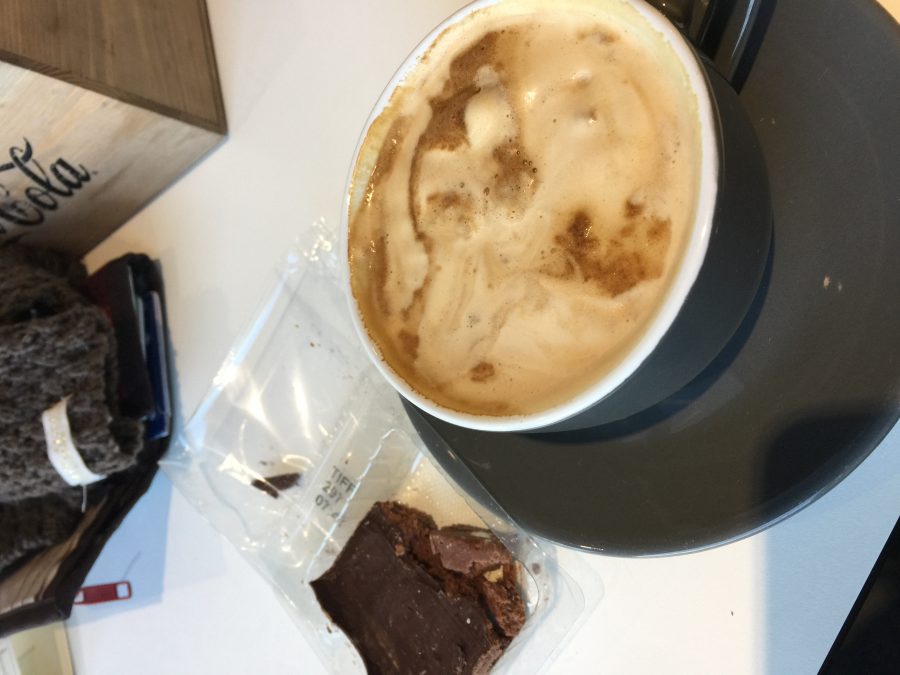 Finally, I’d like to note that I did my best to behave and not disturb the process by asking for pics with Sam and Caitriona when they wrapped, hoping that it’d leave production more likely to allow other fans to join in these behind-the-scenes sneak peeks when they come upon them.